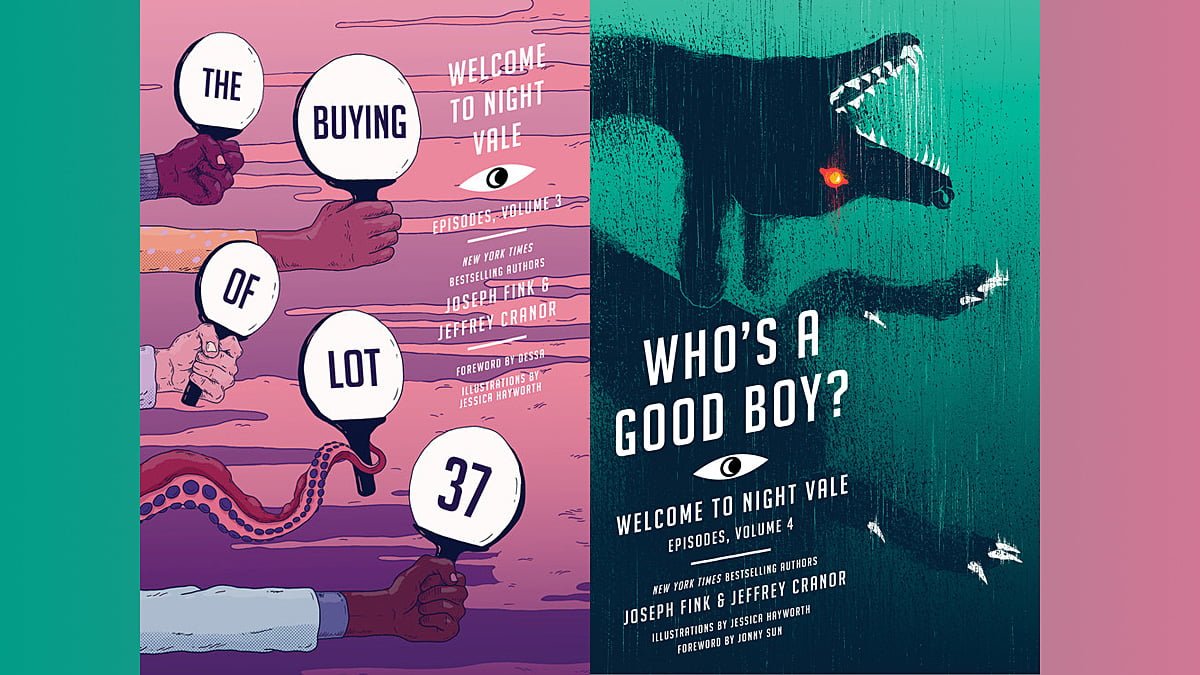 The Buying of Lot 37 and Who’s a Good Boy? are the two latest script volumes released by the Welcome to Night Vale podcast team. The books cover seasons three and four of the show respectively, and also feature two scripts from the Night Vale touring live shows: The Librarian and The Investigators.

As with the two previous Night Vale script books (Mostly Void, Partially Stars, and The Great Glowing Coils of the Universe), there is more to these books than a simple word for word printing of the episodes, although that in itself is great for those with hearing difficulties, helping them to experience the show. Firstly, the books are illustrated by Night Vale artist Jessica Hayworth whose interpretations of the bizarre, creepy, and downright unsettling Night Vale universe is on full display here. There were several illustrations I found it difficult to look at because they made me uncomfortable under my skin. I feel like that was the intention.

But the thing that makes me really enjoy these script volumes is the introductions. Every episode is prefaced with a short introduction. The vast majority are written by the show’s creators Joseph Fink and Jeffrey Cranor, but there are others from members of the voice cast. In these two volumes, there are a handful of introductions written by regular cast members like Cecil Baldwin and Dylan Marron, and a couple by guest stars including actress Mara Wilson and author Maureen Johnson. These introductions help me to appreciate the episodes even more by helping me understand more about the processes behind their creation. There are so many subtle things buried inside these scripts that even if you’ve heard the episodes multiple times you’ll still be able to find something new.

Onto the stories themselves. In The Buying of Lot 37, the town of Night Vale is still recovering from both fighting off the hostile town-wide takeover by Strexcorp, and the results of the mayoral election. Carlos and Cecil have been separated with the former now stuck in the Desert Otherworld, Dana is trying to handle being unexpectedly elected mayor despite not running as a candidate, and the Faceless Old Woman Who Secretly Lives in Your Home and literal five-headed dragon Hiram McDaniels are plotting together to take over the town. If none of that made any sense, then may I suggest picking up the two previous volumes of Night Vale scripts or listening to the show before returning to this point?

I found the title choice for this volume a little odd given that the actual buying of lot 37 took place during season two which was covered in a previous volume of these books, but then I suppose that “The Aftermath Resulting From the Buying of Lot 37” is a bit of a mouthful really. Lot 37 was, as some of you may recall, Night Vale‘s chief protagonist Cecil Palmer himself and his being bought at auction by an unknown person for unknown reasons is another major theme throughout these episodes, leading to some interesting takes on what it means to be in control of our own lives, choices, and destiny. How much control do any of us really have over our lives? Is it truly any more than Cecil has when he is forced to act by mysterious forces, and – given that his actions always seem to be for the greater good – should he try to resist or simply let it happen?

Carlos being trapped in the Desert Otherworld worried me at first when these episodes originally broadcast. I was concerned that, as with so many fictional LGBTQ couples, Cecil and Carlos’s relationship would be pushed to the background and glossed over, if it even survived. Instead, these episodes allowed their relationship to flourish over long-distance with the two regularly calling and texting one another thanks to the Desert Otherworld keeping electronic devices permanently charged. Although they are physically separated for the majority of the time, this season saw a lot of growth in their relationship.

Volume four, Who’s a Good Boy? Ended up being my favorite of the two new books. This was honestly surprising to me because I wasn’t a huge fan of season four when I first listened to it. In this season, four of Hiram’s five heads are on trial, mysterious strangers are appearing over town – staring and breathing at Night Vale residents – and intern Maureen has returned with a truly adorable beagle puppy and a new job where she is in charge of leading an army, or whatever. It’s not like it’s important.

When I originally listened to season four I found it hard to get invested in it. The trial plotline seemed to drag out forever, and the beagle puppy story was so subtly woven into the early episodes that it seemed to come from nowhere as it reached its zenith. Reading the episodes again in book form really helped me to appreciate these two stories because I was able to spot the little clues dropped in right from the beginning of the season and watch as they built up gradually.

I also loved how relevant this season’s stories felt in 2019. In season four, the town of Night Vale is being merged with its arch-rival town Desert Bluffs and new residents are moving into town bringing with them their own religions and culture. Cecil has been brought up to hate these others (as a good Night Vale citizen he is conditioned to see all outsiders as dangerous interlopers) but he gradually comes to accept these new additions to his town and realizes that they are not bad people purely because they are different. His monologue about how meeting people who are different from us forces us to reconsider our concept of “normal” is one of the most profound pieces of fiction I have ever heard.

I can’t imagine that either of these books in themselves will draw in many new Night Vale fans, after all, no one starts reading a new book series with book three or four. I do also feel like reading Night Vale off a page will, sadly, never be quite as wonderful an experience as listening to the show, if only because you miss out on the magnificent voice acting from Cecil Baldwin and the rest of the cast. However, I cannot recommend these books highly enough for fans of the show who will almost certainly gain new perspectives on these older episodes by reading them. I advise anyone interested in trying out Welcome to Night Vale to pick up volume one of these script books, begin listening to the podcast, or to try out the standalone Night Vale novel. Maybe then you’ll begin to understand the lights above the Arby’s too.

GeekMom received copies of both volumes for review purposes.