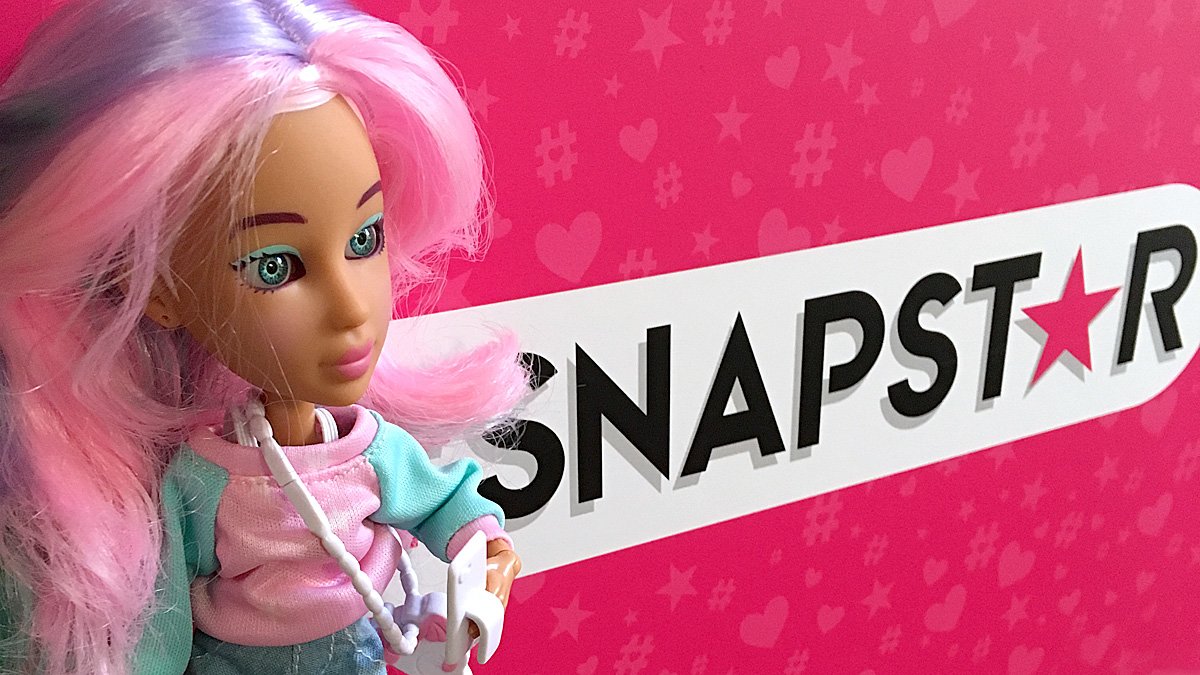 Snapstar is a new range of poseable fashion dolls from YULU which includes six dolls and a selection of additional outfits. The dolls are designed to appeal to social media savvy tweens as they come with a green screen and app for creating Insta-worthy pics, have their own accounts on popular social networks, and all carry their own miniature smartphones. Together, the six dolls are known as the Snapstar Squad and they are available exclusively at Walmart in the USA and Smyths in the UK.

Who Are the Snapstar Squad?

The Snapstar Squad is the name given to the six dolls in the Snapstar collection. All the dolls are girls and have their own characters, “united by their love of fashion, style, food, music and traveling”. Each girl has her own style, although all the clothes (and even their hair) can be mixed and matched to create a wide variety of different looks.

The dolls are named Lola, Aspen, Izzy, Echo, Dawn, and Yuki and there’s a pleasing array of skin tones and hair types on display in the range. The body types are less pleasing as all the dolls are incredibly thin with very long legs, and parents may be put off by the heavy makeup and Bratz-style pouts on every doll’s face.

The clothes in the sets I was sent included super short shorts, dresses, and skirts along with very high heels, although these seemed not too dissimilar from other fashion dolls on the market and are clearly aimed at an audience familiar with fashion influencers. There are some more practical clothes included with the dolls (Izzy comes wearing jeans, Lola a long-sleeved sweater, and Izzy, Yuli, and Dawn all wear jackets), but I was surprised by the number of short skirts, high heels, and crop tops in the range.

A number of additional Fashion Packs are available (I’ve so far spotted at least six different options in store) and each of these come containing an outfit, footwear, and at least one accessory including bags, earrings, headbands, and glasses.

For the most part, the Snapstar dolls themselves are fairly standard fashion dolls. They stand somewhat shorter than an average Barbie but they are a lot more poseable. All the dolls are jointed at the ankles, knees, hips, waist, wrists, elbows, shoulders, and neck so they can be positioned in lots of ways for photos. One of the most unique aspects of the Snapstar Dolls themselves is their removable hair—each doll has a hole in the back of her head and the hair pieces come with a plastic plug that fits into the hole to secure it onto the head. This feature is mostly to help with the process of taking green screen photos, but it adds an interesting element to the outfit changes as switching over the dolls’ hair completely changes a look.

However, the dolls themselves are only a part of the whole Snapstar experience, which really comes to life with the app. Included with each doll is a fold out green screen and stand which you can use to take photos of your dolls. Using the free Snapstar app, you can send your dolls around the world with a range of backgrounds, change their hair (it’s advised to remove your dolls hair before photographing them so the green screen can work more effectively), change their makeup, and add borders and effects such as making the dolls appear to be on a magazine cover.

What’s in the App?

The Snapstar App contains five sections. The most prominent is the Photo Studio where you can take pictures of your dolls. When you open it, it will prompt you to select the doll you are currently photographing, however, by selecting a different doll you can choose from a different range of hair and makeup options. I’d have loved to have seen all these merged together into one larger range of options rather than separated into six different areas.

The Projects section contains your previously saved images, while the Store allows you to unlock addition hair and makeup options. The Snapstar currency is Stars which are earned through clicking on different parts of the app—using tutorials, experimenting with backgrounds and makeup options, etc. There are no in-app purchases using real currency in the Snapstar app and the Store contains a guide to earning coins.

The Squad section of the app introduces each of the six Snapstar girls. You can cycle through them to see photos of the dolls in their default outfits, learn what their individual passions are (Yuki loves music, Aspen loves to travel, and Izzy is passionate about art), and watch a short introductory video about them all which you can also find on YouTube, like the above video which is Dawn’s intro.

Finally, there’s the How To section which is fairly self-explanatory and guides you through using your app, green screen, posing stand, and more.

The app itself is rather hit and miss. Green screen technology is notoriously hard to master, and I wasn’t expecting much from a free app. The pictures it creates aren’t great to adult eyes, but the kids who playtested the app for me seemed to find it amusing. We also discovered quickly that the green screen and app work with any kind of doll or figure, although the facial recognition used to apply makeup only seemed to work on Snapstar dolls. This meant we had a lot of fun putting Harry Potter dolls and Jurassic Park action figures into pictures complete with new hair and funky backgrounds.

Technically, no. You can play with dolls just as you’d play with any other fashion doll, and the app doesn’t allow you to connect any social media accounts directly to it; you’ll need to save your creations to your phone’s Camera Roll then post to social media separately. That being said, it’s clear that social media is key to these dolls. Their profile videos actively encourage you to follow their accounts on Instagram, TikTok, and YouTube and their characters are all about sharing their lives on social media and encouraging you to help them do that.

If I were being charitable, I could see this as a good first step into the world of social media. By creating accounts for the dolls, kids can dip a toe into that world by posting pictures and videos that feature the dolls rather than themselves. In reality, we all know that by taking that first step, it’s but one very short hop to posting other content. By buying these dolls you are almost certainly bringing forward the moment when your kids ask for their own social accounts. Whether or not you allow that is a decision every parent will need to make for themselves, although it’s worth a reminder at this point that most social networks do technically have a minimum age restriction of 13.

Who Will Snapstar Appeal To?

Snapstar is aimed clearly at the tween market, particularly kids already aware of and actively participating in influencer culture through social media. There’s a language at play in the dolls videos and profiles that suggests familiarity with that world (“hashtag wanderlust!” yells Aspen in her profile video) and it will appeal to kids who are regularly watching popular YouTubers and TikTokkers—don’t ask me who those people are, I have no idea.

For kids not yet invested in the social media market, the fashion doll element alone is enough to keep them entertained as much as any other dolls series, and the initial availability of six very different looking dolls means there’s a high chance of at least one appealing to your kid.

Should I Buy Snapstar Dolls?

This is a tricky one. As an adult, I liked these dolls. Despite my misgivings about some of the clothes, the outfits available are cute and funky (I detected a strong ’80s vibe in several combinations I was able to put together) and well-made. The poseability of the dolls make them great for actually playing with, unlike some other more static dolls brands, and the interchangeable hair is a unique aspect that actually adds something rather than just being a gimmick.

A lot is going to boil down to your comfort level with social media and how you view your kids’ relationship with it. If you are already fighting off endless nagging for social media accounts that you are trying to put off, these dolls will not help. If you’re comfortable with your kids being on social media, then that won’t be an issue, but if you have concerns about that then you’ll need to weigh up whether bringing Snapstar dolls into your home will open up discussions you’d rather avoid for now.

Snapstar are funky dolls with a lot of potential, but parents need to consider them carefully before deciding whether to invest.

My Precious: Adventures with the Lego Lord of the Rings Video Game