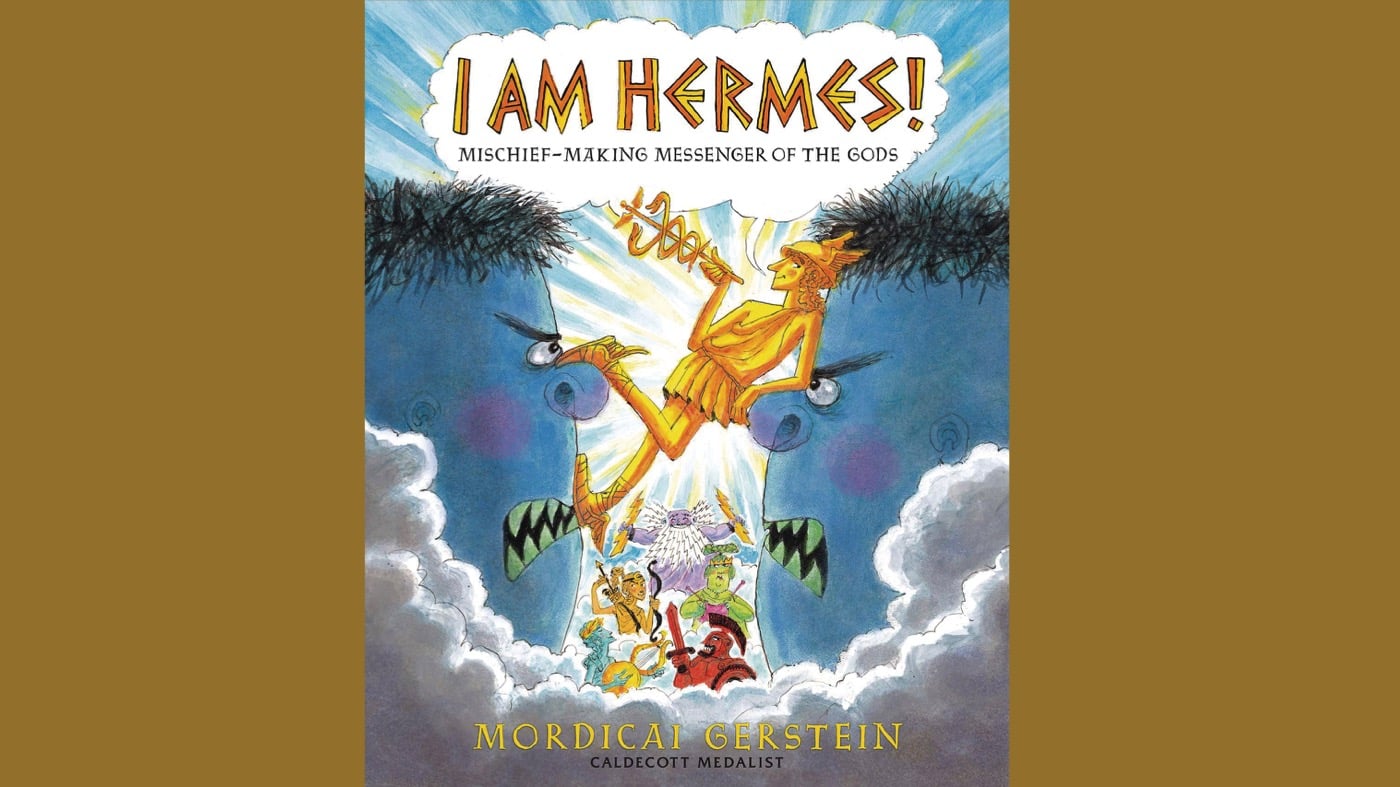 I Am Hermes! Mischief-Making Messenger of the Gods by Mordicai Gerstein

Hermes was always my favorite of the Greek gods to hear about. I’m drawn to all the mischief makers: Hermes, Loki, Coyote. They are not bad, but not quite good either. I Am Hermes! is a bright retelling of Hermes and the myths where he takes a role. After my previous posts on Greek retellings with a darker, older slant, this picture book was a reminder of how entertaining the ancient stories can be, and the fun of sharing them with our children. Mordicai Gerstein is a winner of the Caldecott Medal and knows how to make each page a visual treat. The gods are true to their characters, but with humorous dialogue to keep it all light.

We start with Hermes being born and, before he is even one day old, has tricked a turtle out of its shell and a ram from its horns to invent the musical instrument, the lyre. Then he goes home because he’s a baby and hungry (yay for a breastfeeding picture!), but he soon gets into more pranks by stealing his brother, Apollo’s, cows. All the Olympians think Hermes is the most adorable and sweet baby (especially his nymph mother who calls him all sorts of ridiculous food names), but Zeus realizes what a trickster he is too, and gives Hermes some responsibility as the messenger of Olympus. As an adult, Hermes has a family and they all are into merriment and silliness, but Hermes also enjoys giving gifts to the world of humans with music, poetry, mathematics, and even gifting wisdom to Aesop to write his fables.

I Am Hermes! doesn’t stop with just the ancient tales, but goes on to show how Hermes was never quite forgotten by Western Civilization with the logos of his winged shoes showing up in modern businesses and mail stamps from all around the world bearing his likeness, not to mention his staff of two snakes being the symbol of modern medicine. The story ends with us learning what Hermes is up to now and he’s still very busy! Kids will enjoy reading about this likable character.