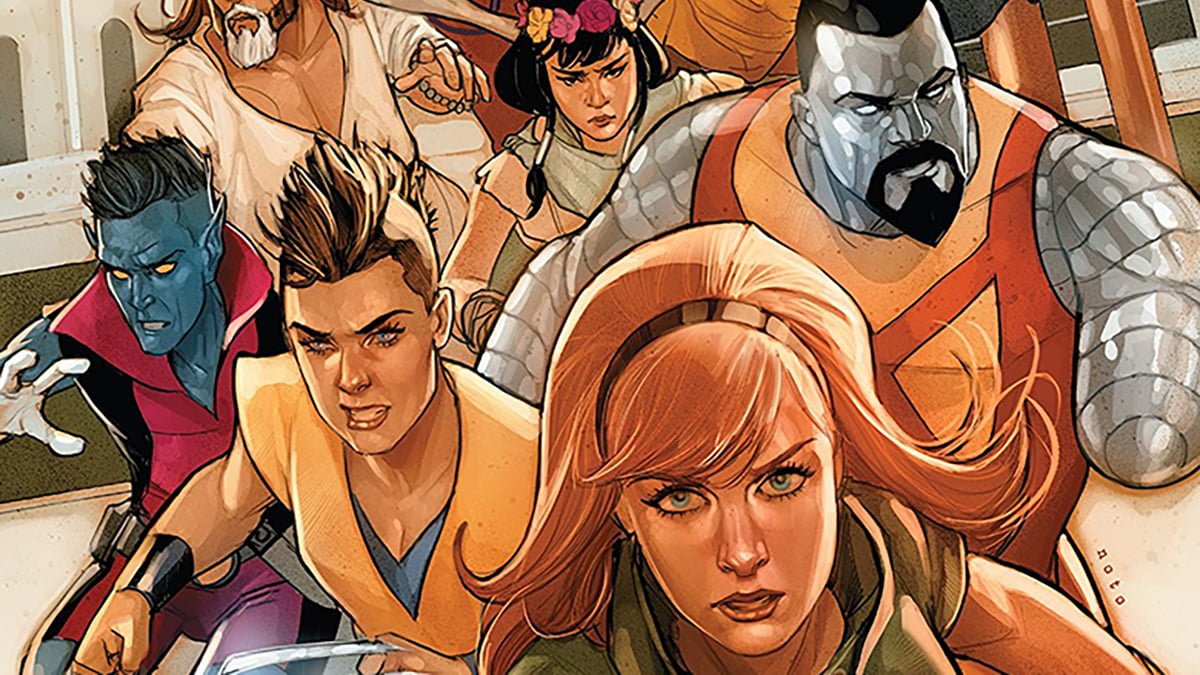 Age of X-Man: Marvelous X-Men #1 is the first of many spin-offs launched by Age of X-Man Alpha. It’s a direct sequel to Age of X-Man Alpha and the Disassembled arc. The premise is “What would happen if the X-Men really did save the world?” The entire world is based on X-Man’s dream of a world where mutants were no longer feared. Mutants no longer have to hide their powers and the X-Men are heroes adored by all. Sounds like a perfect world, right? Yeah, not so much.

I’ve been an X-Men fan since The Uncanny X-Men #168 when Professor X agreed to let Kitty Pryde keep Lockheed (her dragon). I quickly fell in love with comics. By the time Storm defeated Callisto and rescued Angel from the Morlocks, I was a Marvel girl for life. I believed the X-Men could and would save the world but not like this.

Spoiler Warning: If you have not read Age of X-Man: Marvelous X-Men #1 There May Be Spoilers Below 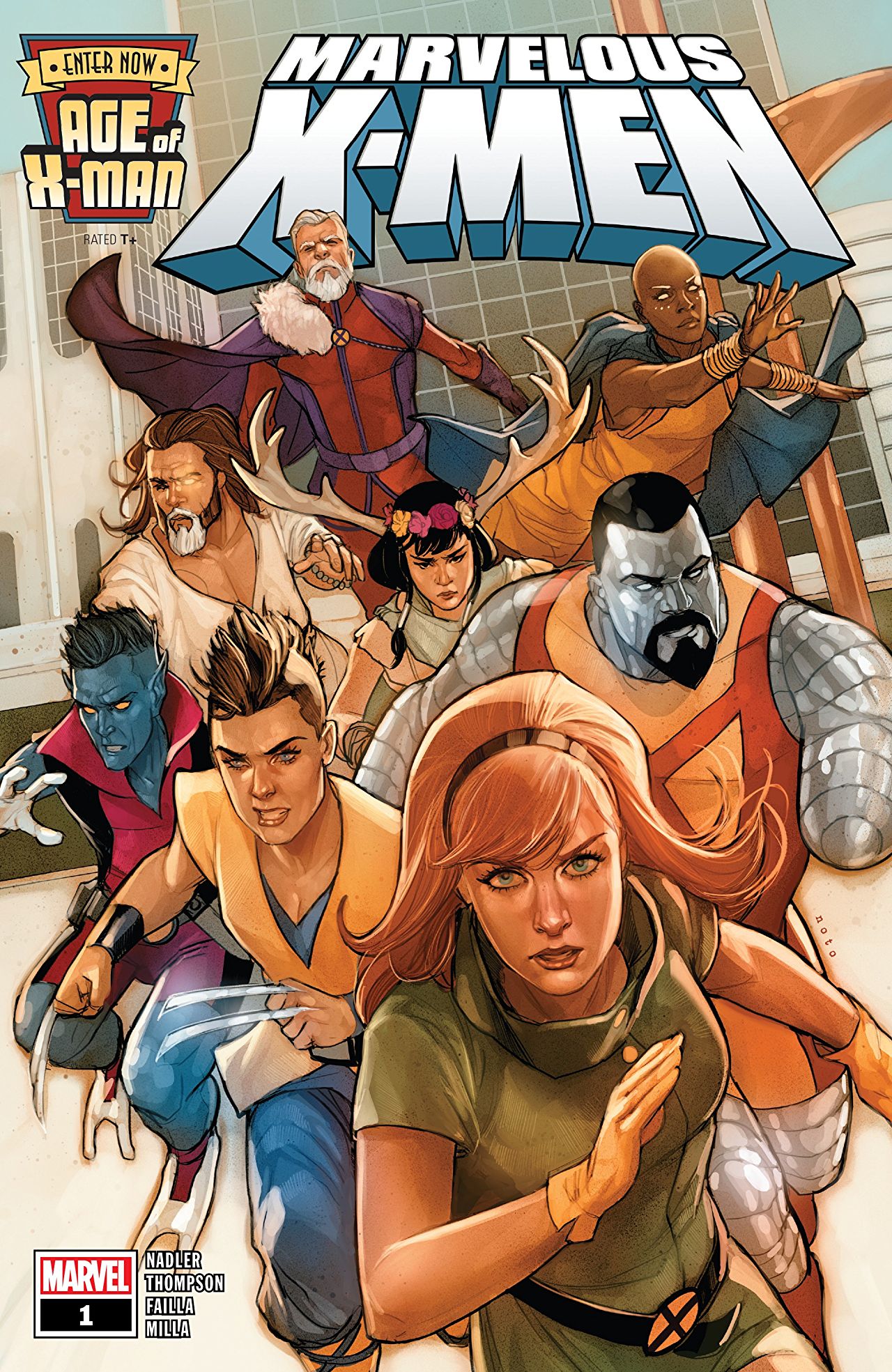 The only book you must read to understand what is happening in Age of X-Man: Marvelous X-Men #1 is Age of X-Man Alpha, and even that isn’t completely necessary.

If you missed the Uncanny X-Men Disassembled storyline, I strongly recommend that you read it, as well as the five-part mini-series EXtermination because it will help you understand some of what is going on in this issue on a deeper level.

In Age of X-Man Alpha, we saw that there is a price for X-Man’s version of perfection. Get too close, care too much, fall in love, and you will find yourself erased. No one will remember you even existed. Oh, the first time you’ll get a warning and be reprogrammed. Your memories will be wiped, and you’ll be reset to the factory defaults. Run afoul those rules one too many times and you will be removed from society. Bishop crossed that line and overnight he was replaced with Laura (X-23). No one remembers he existed. 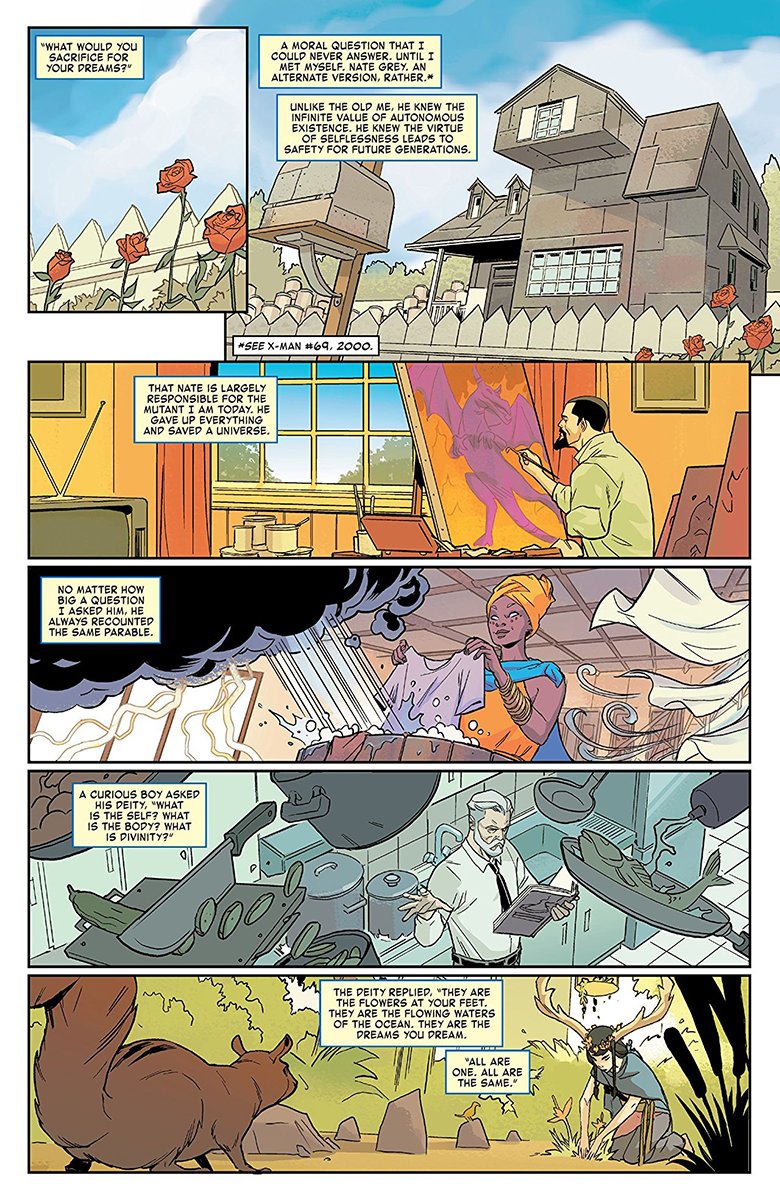 Age of X-Man: Marvelous X-Men #1 sets up the story premise with a single question: “What would you sacrifice for your dreams?” Like so many of the best X-Men stories, this is a tale about the best and the worst inside all of us. This is no brain candy action adventure (not that there is anything wrong with those—I’m a fan). X-Man has created a world free of strife and oppression. Unfortunately, it is also free of love, of bonding, and the connections that so often make life worth living.

One of the many things that drew me to the X-Men is the exact thing X-Man’s perfect world demonizes. My favorite characters have always been the ones that were the most human. They cared the most, fought the hardest, felt the most, and often were the most damaged. They forged bonds, loved despite challenges, and built relationships. They were human but better. They showed us the best and the worst we could be and fought to better. That is the very thing that X-Man eradicated from this new world. There are no connections, no bonds, no needing of one another. When X-Man build his Utopian world, he eradicated something vital—Humanity.

Humanity, however, is an integral part of being a mutant. In Age of X-Man: Marvelous X-Men #1, we see that in spite of the genetic engineering, in spite of the conditioning, our humanity can’t be completely eradicated. 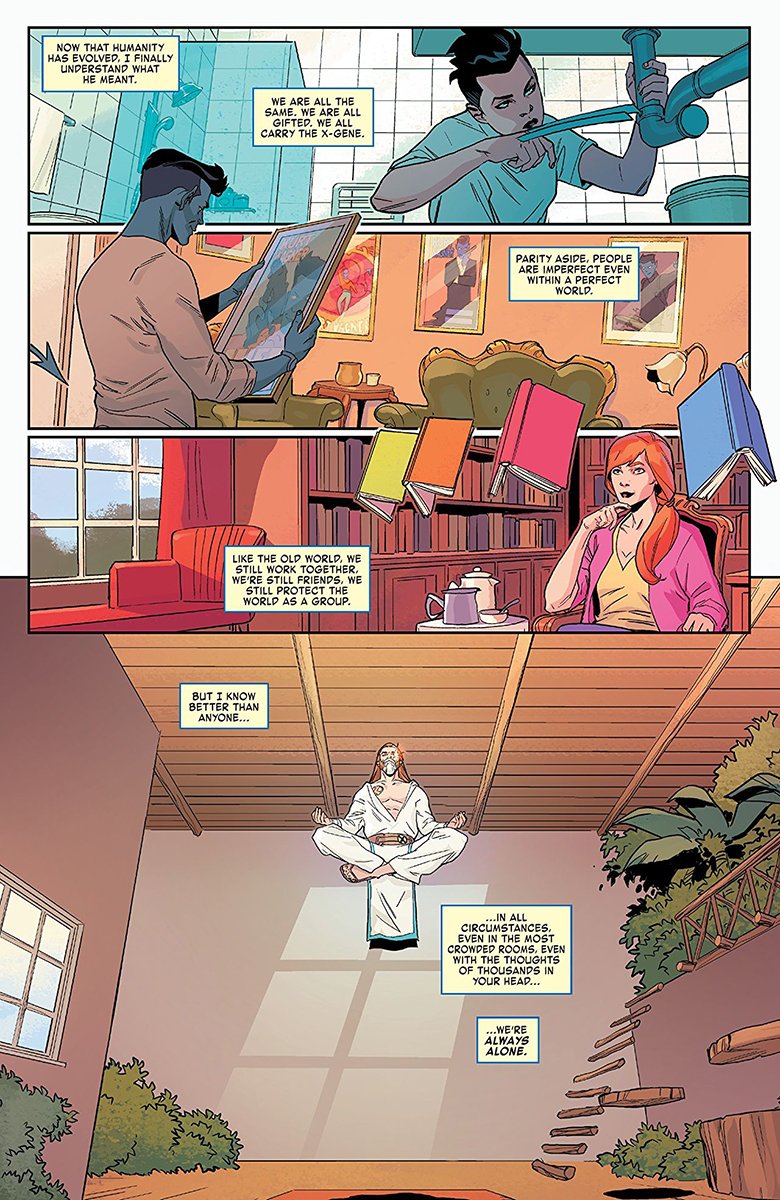 California burns in Age of X-Man: Marvelous X-Men #1 as it has too often in real life. A wildfire threatens homes and lives but here there are X-Men to save the day. To rescue the children and the animals, to find help for the displaced, and to reduce the damage.

X-23 heads to the Pod Hatchery, determined to save the unborn. In the process of rescuing the infants, a memory is triggered. Something tugs at Laura, recollections of love, pain, and a bond.

At the same time, Jean is rescuing the children and yet, through the chaos, a psychic whisper insists that love is not a crime. Jean is too busy to listen but this won’t be the last time she hears it.

In Age of X-Man: Marvelous X-Men #1, we learn that the ideas of romance, family, are considered dead. Even procreation via sexual intercourse no longer exists. The claim is that humanity has evolved beyond such attachments and needs. That claim may not be as valid as Nate Grey, X-Man, might like to think.

Laura discovers that she has a sister and is infuriated when X-Man tells her that she isn’t allowed to see her. X-Man’s reaction to Laura’s anger is a very telling sign that all is not right in this perfect world. Nate’s hiding something and Laura can feel it.

Side note: If you are wondering why Laura can’t see Gabby take a peek at the cover of Prisoner X #1.

When Jean is again assaulted by the same psychic message that was whispered during the L.A. fire, the X-Men learn a resistance is forming. Storm wonders aloud, “What could they possibly be resisting?” What indeed? 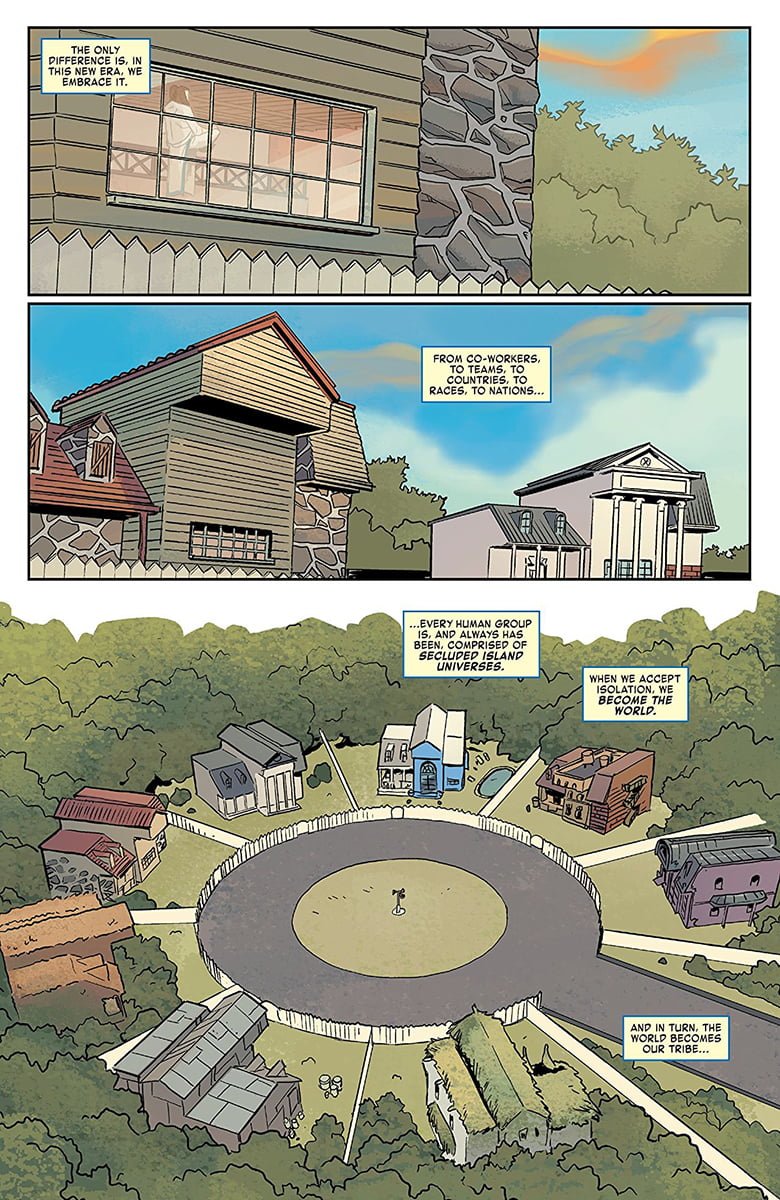 Nadler and Thompson do a wonderful job weaving a tale that has the feel of a psychological thriller. There is something very Norman Bates about X-Man’s obsession with keeping this perfect world free from any negativity. The internal monologue of both X-Man and Laura are expertly crafted to lead us to glimpse the cracks in the polished veneer of this utopia.

Failla’s art paints the world in idyllic beauty, yet there’s something chilling subtly woven throughout this perfect world. Failla’s flawless picturesque art style and Milla’s gentle tones and subtle shadings craft a feeling that is both serene and unsettling. It’s that feeling that you are looking a the peaceful surface of a pond filled with flesh-eating monsters.

I already have a love/hate relationship with Age of X-Man: Marvelous X-Men #1, and I have a feeling this is going to be the case with a lot of the Age of X-Man event titles. It’s unsettling on a deep level. Make no mistake, this series is looking good but at the same time, it’s horrific. It’s good like a horror movie that plays on your deepest fears. It’s like someone at Marvel watched The Stepford Wives, Something Wicked This Way Comes, and then read Needful Things before designing this story. It’s that feeling that a terrible crime has been committed in the name of the greater good. It’s that chilling mask of perfection that often hides the most hideous sins. The mask is already starting to slip and I’m going to hang around to see what’s hiding behind it. 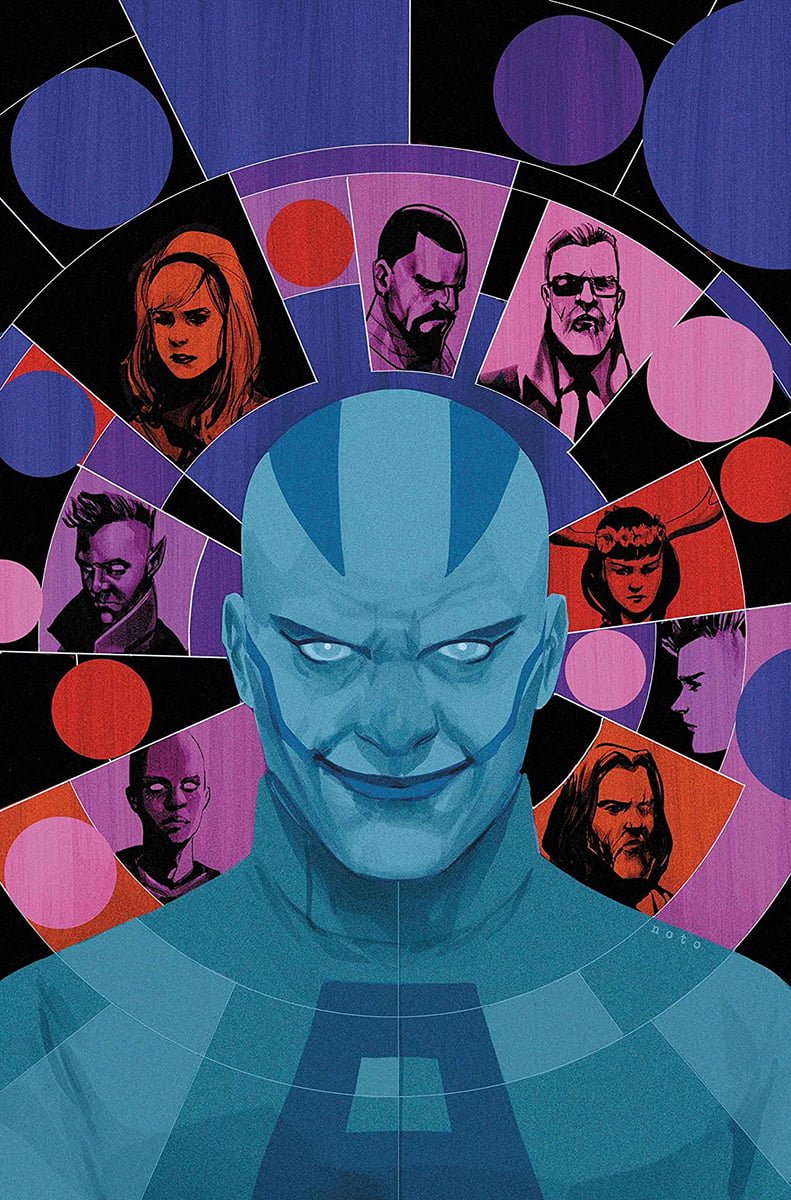 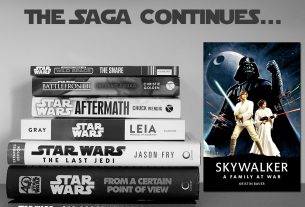 The Saga Continues: ‘Skywalker: A Family at War’ by Kristin Baver

I Am Ms. Marvel