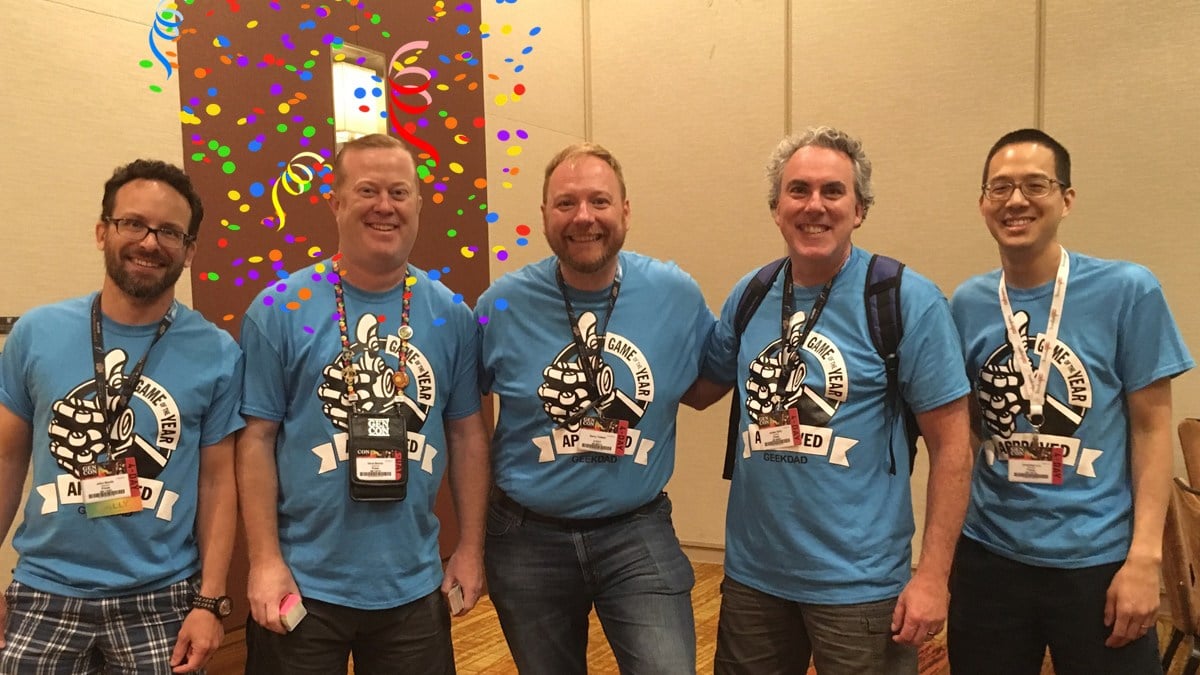 Today we say farewell to one of our long-time GeekDads: Dave Banks is stepping down from his role as Games Editor and game reviewer, after about a dozen years of contributing to the site. He’s seen the site go through a lot of changes and outlasted many writers who have come and gone over the years, but now that his kids (triplets, in case you weren’t aware!) are nearing the end of high school, he wanted to savor the time with them a bit more before they head off to college.

Dave has been a huge part of making GeekDad what it is today, particularly in our coverage of tabletop games. He took the initiative to build our tabletop review index and to establish our Game of the Year process, and he even got our GeekDad Approved seal off the ground. He started up our weekly “Re-Roll” tabletop roundup, giving us a place to share industry news as well as the games we’ve been playing. I’ve gotten to know Dave well over the years, from attending PAX in 2010 to running our Gaming with GeekDad events at Gen Con to hanging out and playing games whenever I managed to get to Kansas City. I’ve always enjoyed spending time with Dave, whether we’re talking about games or our kids or anything else.

I’m going to miss having Dave around, reading his board game coverage and making Gen Con plans, though I expect I’ll still hit him up for his opinions about new games from time to time, or stop by for some games on my occasional visit to Kansas City. Knowing Dave, I think it won’t be long before he’s found a new project to dive into.

Dave, thanks for everything, and enjoy your “retirement”!

Dave was one of the first fellow GeekDad writers I met in person, back at PAX East in 2010, for the first GeekDad panel. Since then, I’ve had the pleasure of attending six straight Gen Cons with Dave as part of the GeekDad team. His enthusiasm for discovering and sharing and teaching tabletop games is infectious, and it’s a blast every year. And unless you were there to see him at work, it’s almost impossible to comprehend the effort and organization and hours he put annually into communicating and meeting with game designers and companies and demo teams, all to try and share every possible bit of gaming enjoyment and useful information and reviews with GeekDad’s readers. He was also one of the driving forces behind Gen Con’s Gaming with GeekDad events the past few years. Thanks, Dave—hope we’re sitting at a table again sometime!

I believe I first met Dave Banks, along with his son, at the first Maker Faire I went to, back in 2009 (wow, 10 years ago!). GeekDad had a booth, and Dave and I, among others, were there to staff it. Dave was confident, quick to jump in and volunteer, and friendly. From that positive beginning, Dave has only improved upon longer acquaintance. He is thoughtful, generous, capable, and thorough. He is quick to volunteer for tasks he’s well suited for, and he makes himself available to those who could benefit from his help. Dave has even gone out of his way to do something nice for me personally. It’s been a pleasure to know Dave and to work alongside him at GeekDad.

The writers of GeekDad are scattered across the globe, but occasionally we manage to get some face-to-face contact. That was the case for me, four Gen Cons ago, when I met Dave Banks. Dave was a whirlwind of a game player, immediately pulling out a copy of Imhotep (I believe) for our group to play and then proceeding to another… and another… and another. I’ve always enjoyed reading Dave’s game reviews, and I cannot count how many games I’ve purchased over the years based on his suggestions. He is a true gamer’s gamer, and if you ever get the chance to meet him and talk about games… be prepared to walk and talk. Dave makes the rounds of Gen Con with a purpose, and you have to be a true multitasker to keep up with him. He’s always smiling, and you’ll be surprised at how many people know him from GeekDad (probably second only to Jonathan Liu).

It’s tough to hear that Dave is leaving us at GeekDad, but like most of us… he has a family that is growing up and he wants to spend some more time with them. I get that, and I wish him all the best in his future endeavors. I also hope that I will run into him at future Gen Cons because it’s hard to imagine Gen Con without him in the mix introducing us to new games and new developers.

All the best, Dave… and thanks for all you’ve done for GeekDad over the years, the introductions you’ve made for me (and others), and the great game introductions.

As a UK-based GeekDad, chances to meet up with other members of the clan are distinctly limited. Dave is the only one I’ve met face to face. We met up whilst he was on vacation in London. We had a morning in which I could show him around. It’s funny how when you need to show somebody around your home turf, thinking of stuff to do suddenly becomes extremely difficult. Even in a city like London.

In the end, we settled for a walking tour, taking in a cup of coffee at Covent Garden at the end. My one ace card, it turns out, was a stop at the “Orc’s Nest,” a long-running games store in the heart of the city. Dave was like a kid in a sweet shop; I don’t think I ever imagined someone could become so excited over a copy of Cottage Garden!

I was blown away by the depth and breadth of Dave’s game knowledge, and how many of the people, who to me were just names on boxes, he’d met, played games, and talked design with. It was a real eye-opener, how well-respected and loved Dave and GeekDad were amongst the gaming community. In the space of one morning, Dave’s passions for games and his desire to make GeekDad the home of consistently excellent tabletop coverage shone through.

It was through many of Dave’s reviews that I came to love GeekDad. I hope the rest of us can continue building on his strong foundations and hope that one day he returns with his incisive reviews and his eye for an excellent game. I’ll miss having Dave at GeekDad, but my bank account may breathe a small sigh of relief.

Here’s to Dave—after bonding over late night board games and discussing the best place to get KC barbecue, I find it highly improbable that we will not see each other again for more of the same. Enjoy your rest and take every opportunity to spend time with your teenagers. To paraphrase our favorite bearded author: “may you be wise enough to know yourself, and brave enough to BE yourself, and wild enough to change yourself while somehow staying altogether true.”

My memory is a little hazy, but I’m pretty sure I first met Dave at the first ever PAX East convention in Boston, back in 2010. We played old school Dungeons & Dragons in the hotel lobby (our characters all died), attempted a run through Mansions of Madness while sitting on the floor of an ill-lit conference room (our backs and legs died), and pushed our way through a massive line of people on our way to the first ever GeekDad Parenting Panel (we all nearly died when we found out it was our panel they were waiting for). Dave is always welcome at my gaming table, with his sharp, sardonic wit, his excitement for all things ludic, and his natural curiosity. GeekDad will miss him dearly.

Like others here, I first met Dave in person at Gen Con, although I had gotten to know him a bit virtually thanks to Slack before that. Attending something as big as Gen Con for the first time can be a bit overwhelming, but Dave immediately made me feel welcome and a part of the team. Later, I was honored to be invited to join Dave and Jonathan in Portland for a weekend of intense gaming while we decided on the first GeekDad Game of the Year, but what really stands out in my mind about that weekend was the Sunday morning that he and I sat in the Liu’s basement and talked for a few hours about our other shared interest: we are also both the fathers of Boy Scouts and involved as adult leaders ourselves, and it’s always great to compare notes.

I will definitely miss having Dave around on Slack to chat with, and future times when we GeekDads get together won’t be the same without him.

First, let me say that I really, really hope this is a hiatus, and not a final farewell, because Dave has been such an important part of the life of GeekDad, it would be a shame to lose what he’s brought to the venture over the nearly 12 years we’ve been going. Here’s a bit of trivia that folks might not know about Dave, from something he mentioned in an email to me way, way back: “I was the one who wrote Chris and encouraged him to spread out and bring more people on board—I felt GeekDad was (at the time) too San Fran-centric.” Yeah, way back in 2007 it was Dave who suggested to Chris Anderson that he expand GeekDad’s roster, which is when things really got rolling for us. Ever since then, he’s been the best example I’ve seen of someone taking their geeky passion and turning it into something even more, as part of their relationship with GeekDad. His advice over the years on business issues has been invaluable, and the support he’s given the blogs via his other resources has been immense. Whatever the future holds, it has been an honor to work with him, to play games with him at conventions, and know him as a friend. In every way, Dave Banks is:

Click through to read all of “Celebrating Our Own Dave Banks” at GeekDad.If you value content from GeekDad, please support us via Patreon or use this link to shop at Amazon. Thanks! 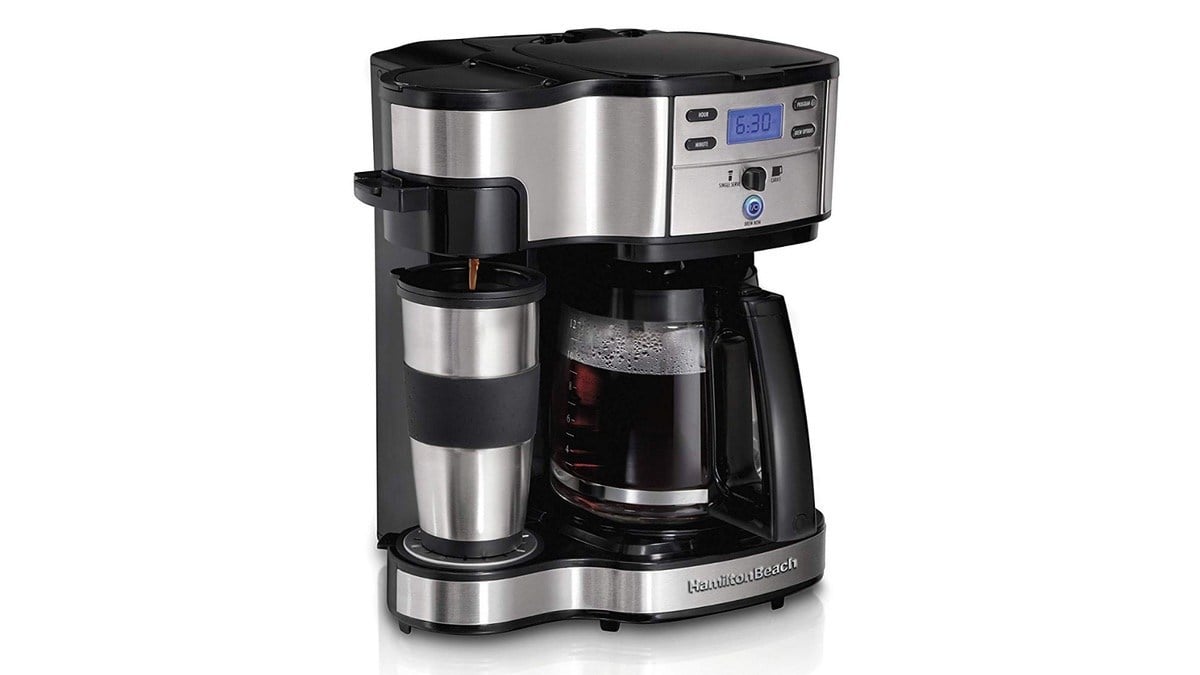 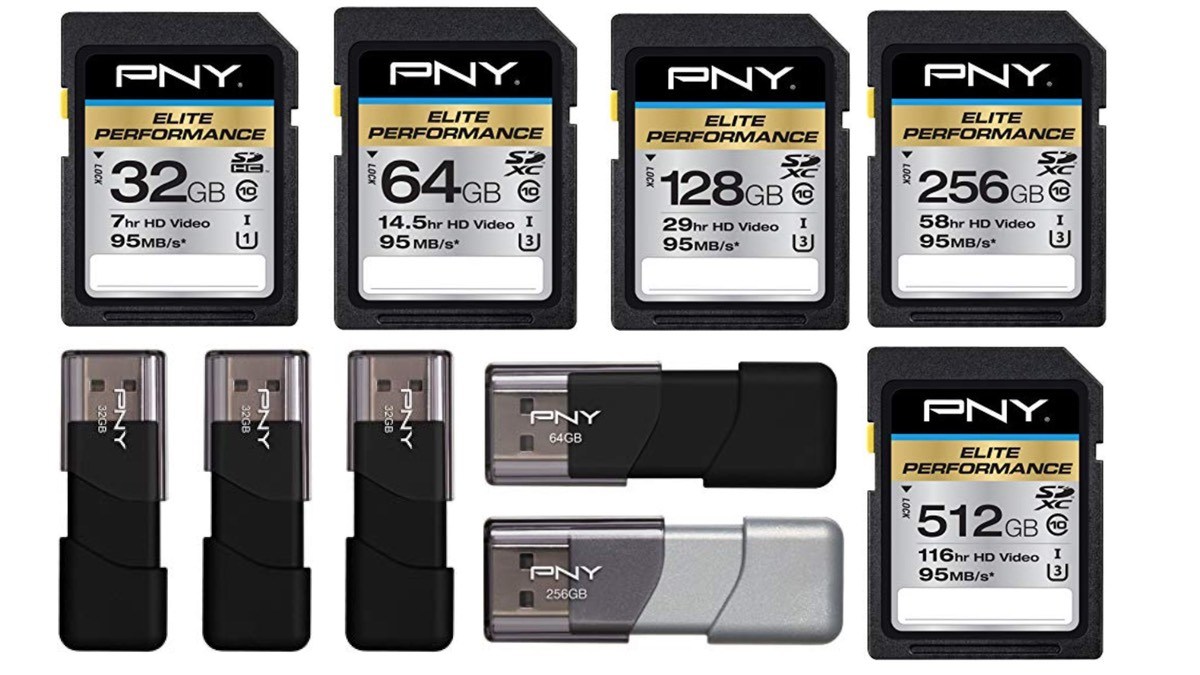 In Light of ‘Avengers: Endgame:’ Parents, Please Talk to Your Kids About Spoilers