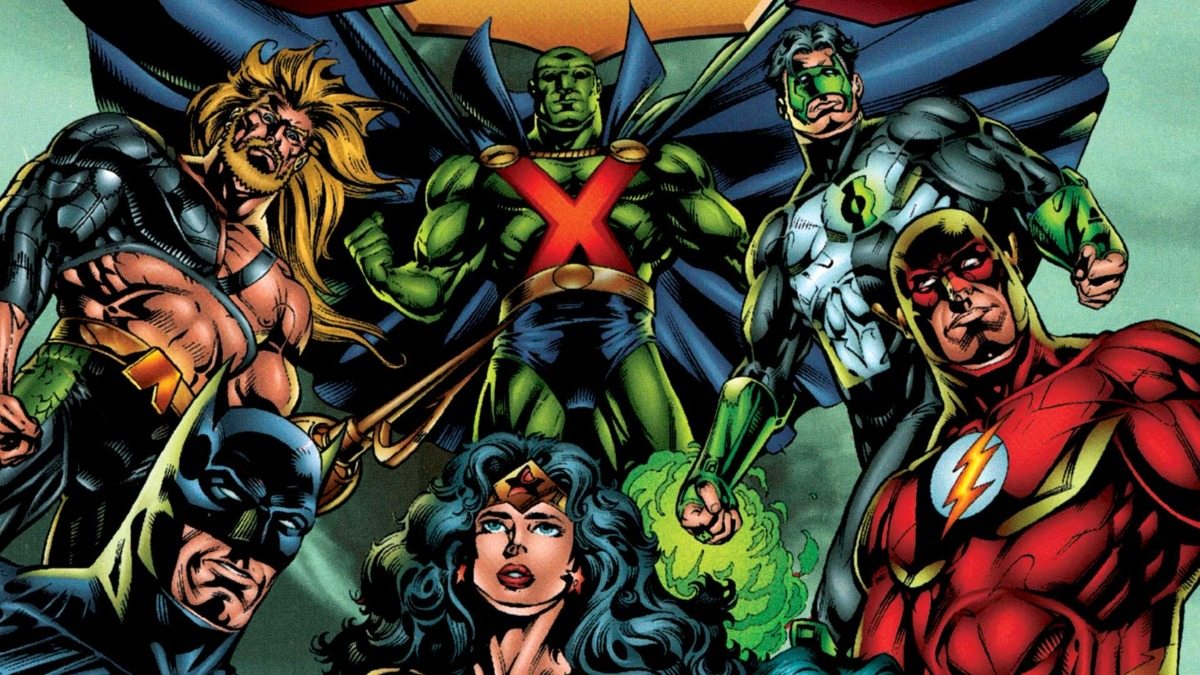 Justice League trade paperbacks, and that’s evident when you try to sort out collecting the classic JLA series by Grant Morrison and Howard Porter.

For example of the issues with the collections, the new Justice League International Omnibus printed some pages in the wrong order and outright omitted some dialogue. This was corrected in the second printing, but I’m glad I canceled my pre-order anyway. Justice League of America (yes, that’s really what the exact title is) is collected in a way that is so convoluted it would require a separate article to explain that.

Fortunately, I’m here to talk about what many, myself included, believe to be the best version of the Justice League: JLA.

JLA, which is not the same as Justice League of America, is the 1997 incarnation of Justice League. The book ran for 125 issues with numerous writers and artists, but Grant Morrison and Howard Porter’s run, in particular, is legendary. Epic in scope and scale, it used iconography to inform their characterization and keep the characters relatable in a way that is similar to the DC Animated Universe.

It’s elegant and streamlined, never truly requiring the insistent continuity that can make team books a more difficult read. If something does change within a character’s solo title, you see it, but it isn’t a plot point. Superman is still Superman, even when he’s Superman Blue, and that’s all that matters.

In Morrison and Porter’s run, the art is gorgeous, highly stylized, and a treat for the eyes. But I don’t want to make JLA sound like it’s entirely their effort, because JLA also includes iconic stories like ‘Tower of Babel,’ later (loosely) adapted as the animated movie Justice League: Doom, the ‘Dream Team’ arc, which had beautiful pencils from Bryan Hitch and Mike S. Miller, and there is even the reunion of Chris Claremont and John Byrne – a feat that I can only assume required a contractual guarantee that they would never have to be in the same room.

The JLA collections don’t have the same problems that other Justice League titles do, but understanding why there are different editions of the same comic, and what those differences are, took me at least a week to sort. But I eventually figured it out, and I want to share the fruits of my labor so that no one ever has to deal with this nonsense again.

How it’s collected (and why it’s stupid)

JLA is collected in three editions. With most series, you can get a relatively complete reading experience by picking one format, starting with volume one, and reading until the end. DC, I think, deemed this too easy. After all, who could have fun reading a comic without cross-referencing wikis, reviews, and badly written information on Amazon?

I’m going to discuss each format, along with its advantages and disadvantages, marking bolded trades within their categories as ones that I consider part of the optimal reading order. By the end of this, you’ll have a list of the best way to read this comic beginning to end: and you won’t have to spend a week looking it up like I did.

There are four JLA Deluxe Editions, all of them oversized hardcovers. This is the only version that doesn’t reach the end of the series, as the Deluxe Edition name is actually a trick. It is in fact a collection of Grant Morrison’s work on JLA, including various tie-ins: an arc on JLA: Classified, JLA #1,000,000, and the graphic novel JLA Earth 2 (a collaboration with Frank Quitely, the artist on All-Star Superman). All three of these are invaluable contributions to how JLA should be read and experienced, and while all three of them are available in other formats, it’s less expensive to read them this way.

Unfortunately, you can see here that Issues #18-21, #27 (actually a Morrison/Howard issue, but a tie-in to the Day of Judgment event, which I had not heard of until I started writing this article), #32-33 and #35 aren’t collected in these trades. Morrison didn’t write the excluded issues, Mark Waid and Devin Grayson (#32) did.

I’m going to take a moment to discuss a concept which is used less commonly today: fill-in issues. These are when a guest writer (which is how Waid and Grayson are credited) takes over for an issue or arc. There are a number of reasons someone could do that: sickness, the writer is busy on another project, or sometimes just being slow. Today, you’re more likely to have an issue delayed for a month rather than have a guest writer or artist. The excluded titles (not counting #27) are fill-in issues, and as such were deemed, in the interest of keeping this an unofficial Morrison/Porter collection, unnecessary. As such, let’s look at the next format.

These nine paperbacks, printed in regular comic book size, collect the entirety of JLA‘s 125 issue run. This is the least complicated way to read the series, as there are no missing issues from the main title. The lack of certain tie-ins, however, makes a pure paperback collection not as complete a reading experience as is available by mixing and matching.

Worse, the content is similar enough to make it confusing in its own right. But JLA Secret Files #2 is not included in the Deluxe Editions because it wasn’t written by Morrison, and JLA: Classified #1-3 and JLA Earth 2 are not included in the paperbacks.

If you were hoping you could simply grab the hardcover of Volume 4 and move to Volume 5 of the paperbacks, ignoring its missing issues, you are sadly mistaken. Issues #43-46 contain the aforementioned ‘Tower of Babel,’ a story centered around Batman’s conflicts with the Justice League. Its quality and characterization is so strong that 18 years and three continuity reboots later, it continues to inform the character of Batman. It also radically affects the Justice League, with its fallout continuing throughout the next arc and beyond. It is an integral part of the reading experience, and I am baffled that DC didn’t pay attention to that when they were putting together the trades.

Because of DC’s lack of attentiveness to their reader’s needs, you’ll need to double dip on Volumes 3 and 4. I know. I’m sorry.

I’ve also highlighted Volume 1 here instead of in the Deluxe Editions. The hardcover is two or three times more expensive than the paperback, but has the exact same material. If you’re given the choice between the two, by all means, pick the Deluxe Edition. I was lucky enough to find it at a used bookstore, and the oversized edition shows off the art beautifully. Just don’t go paying 30 dollars more for it when the paperback edition is available and in print. I will always, always point out a more affordable version if at all possible.

I’ll confess right away, there’s no good way to name these. These are your basic, 5 or 6 issue collections, but I’ve already called something the paperback edition. Skinny trades it is.

There are 19 volumes, each one collecting 4-9 issues. While better than a lot of bad collections (the original paperback release of Starman comes to mind), this is the absolute worst way to collect the series for a number of reasons: the spines are not numbered, necessary tie-ins are not included, and the cost is absurd. Even ‘Tower of Babel,’ which collects two small tie-in stories from anthology titles, isn’t worth getting in this format; the four issue story arc is in the neighborhood of 80 dollars. Even I’m not that obsessive, and I can’t in good conscience recommend seeking it out (though if you do happen to have ‘Tower of Babel’ and the Deluxe Edition Volume 4, and you don’t mind skipping the the three fill-in issues before, you could then move directly to Volume 5. I can’t recommend that in good conscience either).

I did promise you wouldn’t have to cross-reference anything, so now that we’re at the end of the article, let’s take a look at what I recommend for your JLA collection. I have to point out, if you click the links, some of the names are different from what I’ve been using in this article. That’s part of why I wrote it: bad copy, titling, etc. on websites makes an already frustrating endeavor even worse. It’s accurate. I promise.

For those of you who collect digitally, the paperback JLA trades are available, but the Deluxe Editions are not. If you are a digital reader or just can’t find the deluxe editions of Volumes 3 and 4, the you’ll have to purchase those tie-ins separately. You can find them here:

And for those of you who somehow found all four Deluxe Editions, here are the tie-ins you’re missing.

Figuring out how to read JLA was a week-long project that did, ultimately, end up with me having the chance to read some amazing comics. While I understand the idea of a Deluxe Edition, something oversized and with bonus features, this was a monumentally frustrating experience. I sincerely hope this article helps people avoid that same frustration, even though there is some double-dipping by having the Deluxe and paperback versions of Volume 4. That’s DC’s fault though, not mine.

To address DC for a moment: this was an absurd exercise.

This is an article about how to read one of your critically acclaimed, flagship titles, one that should have the most attention. It should not be a matter of guessing or research to figure out how to read your comics. Switching between volumes like I will with Volume 4 is ridiculous. Expecting your fans to do homework, or just live with not reading a complete version of a series that ran for 10 years, is insulting to the fans and to the work itself.

Anyway. That week’s worth of effort was worth it. So was the time spent writing this article. These comics are way too good to go unread.