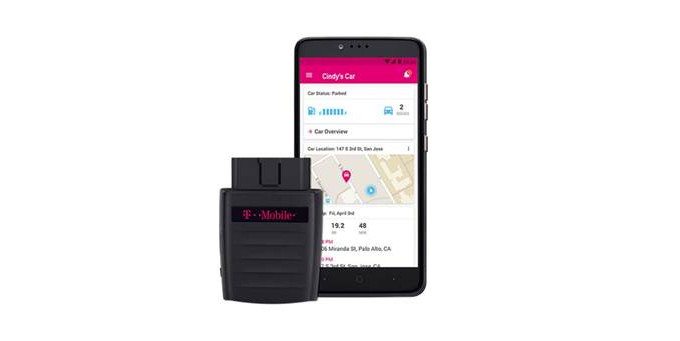 For the last few weeks, my car has had Wi-Fi and diagnostics that it didn’t have when I bought it, thanks to the T-Mobile SyncUP Drive. This device has enough different features that its main purpose will be different depending on your particular needs and interests, but in short, it’s a Wi-Fi point, a driving monitor, and a diagnostic tool.

Setup is pretty simple. The device plugs into your car’s onboard diagnostics (OBD) port, which is generally somewhere below your steering wheel. If you’re not sure where to look, this CarMD tool can help you find it. Then it’s just a matter of downloading the SyncUP Drive app to your phone and following the setup instructions to connect them. Now let’s talk about each of its main uses.

If you feel a pang of jealousy when you see commercials for new cars that have Wi-Fi built-in, but you know it’s not time to buy a new car, this is the feature you’ll be most interested in. Your kids can get their devices online on long drives, while your passenger gets some work done from the front seat, for a total of up to five connected devices. Mine have used it to stream videos and play Pokemon Go.

The coverage is through T-Mobile’s network, of course. I’ve been on T-Mobile for several years now, and while, at one point, that would have meant a lot of dark spots, the map has increased considerably. Nevertheless, if you foresee primarily using it in rural areas, you’ll want to double check that map before signing on.

The SyncUP Drive has been riding in the family car, which is also the one that my husband primarily drives on a daily basis. As I jokingly comment on his driving habits (two harsh brakes on the way to work today, huh?), he asks when the stalker is leaving the car. But if you have a new teenager driver, this could be exactly what you want. While the car is in motion, you can follow it on a map and see the path it has taken since it started. Once the trip concludes, you can see:

You can also set up a geofence to get an alert when a car leaves a designated radius and use the SyncUP Drive to set your phone to “Do Not Disturb” mode once the car has turned on.

Did that recall you heard about apply to your car? The SyncUP will tell you. It can also alert you to low fuel, battery problems, and current diagnostic trouble codes being reported. 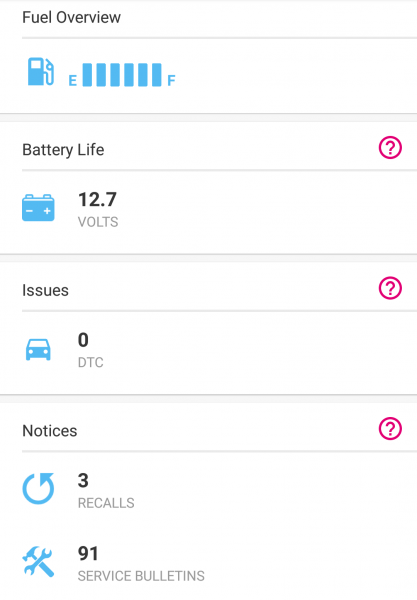 You can click through to any of those items to get details about the problem or status.

You can choose what of any of the above items you’d like to get push notifications for, such as when the car goes over a certain speed, when a trip starts or ends, or when a new recall is issued. You’ll get these on a phone with the app installed and connected regardless of whether that phone is with the driver, e.g., a parent at home could get these notifications while a child driver was away.

Another notification that the app provides is for “disturbances.” The idea is that it should tell you if the device thinks your car may have been broken into. In reality, it sends this notification every single time we get in the car. Other users I talked to haven’t all noticed that behavior, so it seems to be a quirk of your particular car. It’s not particularly bothersome, and you can turn it off in the notifications.

I can’t be entirely sad to tell you that I haven’t personally tested this feature, but the SyncUP does offer roadside assistance through Allstate Motor Club, which is included with the service for the device. It does not, however, automatically notify them or anyone else in a crash scenario.

What else do you need to know?

First, you should be sure that your car is supported using the tool on the SyncUP Drive page at t-mobile.com. Our Honda Odyssey had no problems, but our Volkswagen is listed as “SyncUP DRIVE has not been tested with your vehicle.”

If you’d like to expand on the SyncUP Drive’s existing capabilities, you can use IFTTT recipes and Moj.io. Or use it to put an Amazon Echo in your car.

When you take your car in for service or inspection, be sure to remove the device before you go. We discovered after having the car in the shop that the device was missing. It turned out they had tossed it in another part of the car. But a /r/tmobile reddit user noted that some places won’t remove a device in the OBD port (for example, Progressive insurance will let you plug in a similar device that tracks your driving habits, which affects your insurance costs), so you may have some hassles if you don’t do it yourself.

Whether this device is worth it depends heavily on how you would use it and whether you’re already a T-Mobile customer or planning to become one. It does require an active data plan. The device itself is currently on sale for $48, a pretty significant drop from when it was first released that may make many people reconsider.

GeekMom received this device for review.

ThinkGeek's Soft Kitty Hoodie Is Perfect For You And Your Kids 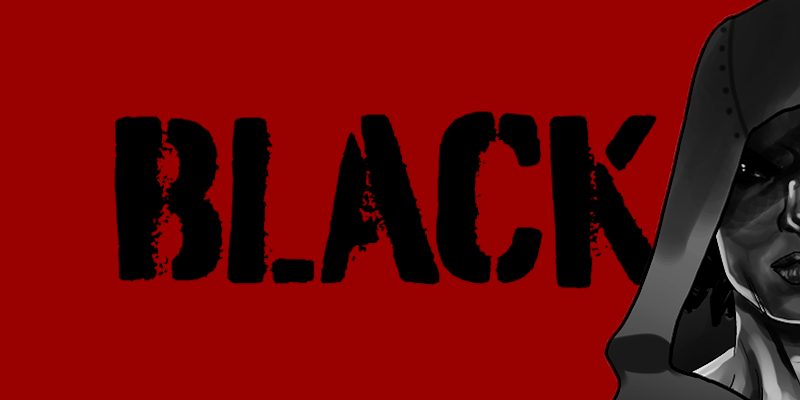 ‘Black’: A World With No White Superheroes