Like many parents, I appreciate it when my kids are into a show that I don’t mind watching with them. Take, for instance, My Little Pony: Friendship is Magic. I’m sure there are lots of geek-inclined moms with girls of a certain age who understand the knee-jerk resistance to anything pink and princess-y (that was my first reaction), but if you look beyond the candy colors and relentless optimism, there’s a refreshing amount of universal humor and fun in Hasbro’s reimagined series. You might even catch a reference to Harry Potter or Doctor Who. I mean, any show that has Weird Al as a guest star playing a character named Cheese Sandwich has my attention.

So, when the feature film based on the series came out this past October, I wasn’t dreading the inevitable trip to the theater with my daughters to see it. My Little Pony: The Movie features the original Mane Six, as the central characters from the series are called (horse-related puns are a staple of the show), alongside new friends and villains voiced by big stars, including Emily Blunt, Kristin Chenoweth, Live Schreiber, Michael Peña, Sia, Taye Diggs, Uzo Aduba, and Zoe Saldana. Their adventures take them beyond Equestria, from the skies above to the sea below, and lots of places in between. There are spirited musical numbers and entertaining performances. For fans of the show, it’s a real treat. 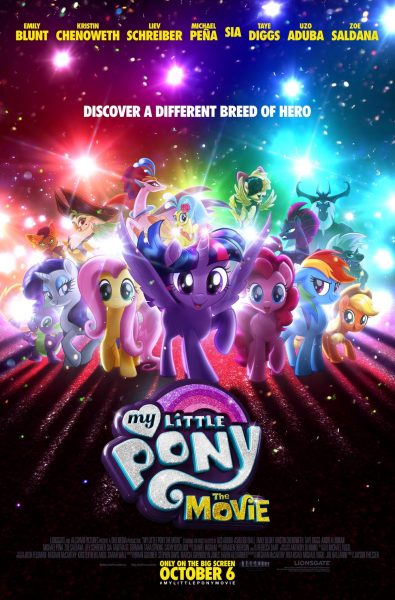 And speaking of treats, my daughters and I were recently invited to celebrate the digital release of the movie at a very special pony-themed party at Duff’s Cakemix Studio in Pasadena, California. The brand new space, owned by “Duff” Goldman of Food Network show Ace of Cakes fame, specializes in cupcakes you can decorate yourself. In addition to creating our cupcake masterpieces, the festivities also included ornament decorating, hair styling, a photo booth, and a chance to hang out with the voice of Twilight Sparkle herself, Tara Strong (who can also frequently be heard in our house as the voice of Raven in Teen Titans Go!, Bubbles in The Powerpuff Girls, Harley Quinn in DC Super Hero Girls, and many more). The girls had a blast making their cupcakes and taking pictures with friends they made at the party. They kept going back to the booth, and even got Tara into the act (look for a full interview with her coming up in the new year).

Check out the pictures below to see all the fun. And, if you have MLP fans in your house like I do, be sure to check out My Little Pony: The Movie, arriving on digital December 19 and available on Blu-ray and DVD January 9.

‘Sherlock’ Is Back, and I May Even Be Pleased About It

The Glamorous Life of a Stay at Home Mom