GeekMoms Karen Walsh and Nivi Engineer return for another Adventure in Instant Potting. In response to Nivi’s Dear Instant Pot post, Karen and Nivi decided to use their powers of geekiness to help overcome cooking challenges. For Nivi, it’s her shaky relationship with her Instant Pot. For Karen, it’s baking. So in this new series of posts, Karen and Nivi start with recipes and try to improve them, add variations to jazz up what’s out there, try to come up with dishes that their families will actually eat without complaining, and, on occasion, put together geek-themed recipes. For the most part, we’re aiming for simplicity and taste.

So, without further ado, this Adventure in Instant Potting has the theme of Hamilton-themed recipes for your Independence Day weekend. 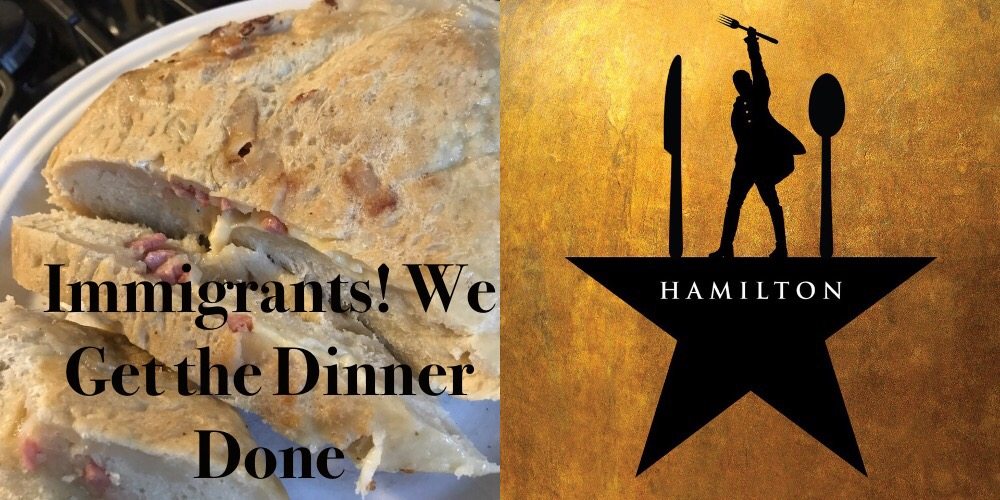 Immigrants! We Get the Dinner Done

I love bread. I love bread even more when it’s stuffed with amazing deliciousness. You know, like ham and cheese. The inspiration for me, then, was the idea of stuffing ham into a bread for the first Hamilton-themed recipe. However, ham needs something to go with it. That meant, cheese. Keeping in mind that I wanted this to be a teensy bit fancy, I went with Gruyere. Since we have a French cheese, I automatically felt that this was the Hamilton/LaFayette meal.

Pizza dough (I bought the premade because… lazy)
1 8oz package diced ham (or you can use one cup of leftover ham)
8oz shredded Gruyere
1 pie tin or springform pan
Salt, pepper 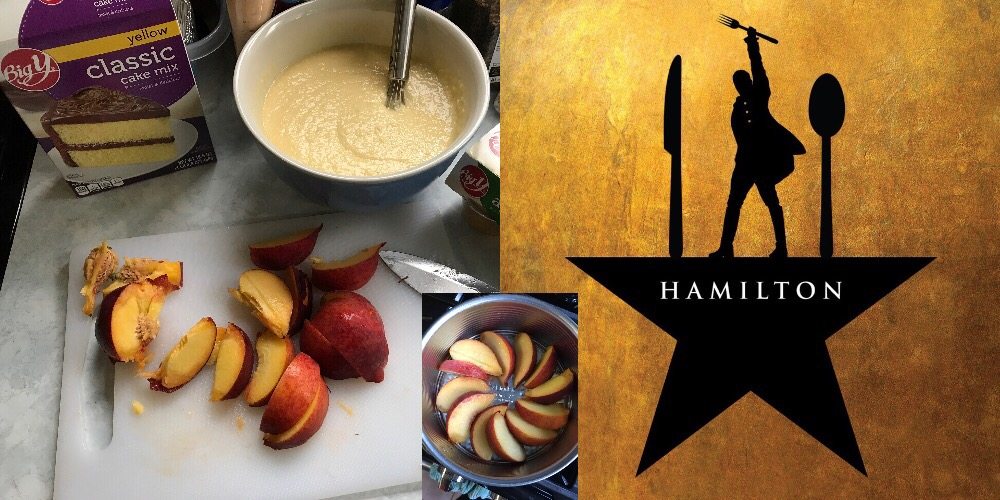 For our next Hamilton recipe, we turn to Thomas Jefferson. The founding father who declared our independence was a Southern gentleman farmer. Apparently, while he was mellow at Monticello, he grew as many as thirty-eight varieties of peaches. With this in mind, our Jefferson dish reflects his crops.

Mix the cake according to the box directions. (I substituted unsweetened applesauce for eggs because I didn’t have eggs.) Spray a springform pan with nonstick spray. Place the peaches in the bottom of the pan. Pour the cake batter over it. Set the Instant Pot on manual high pressure for 20 minutes. Let cool.

*Important note: GeekMom Karen is notoriously terrible at baking. This means that things never work right. When she “baked” it, the valve was stuck so the cake didn’t cook right. And she has no pictures of the final cake because her dog ate it. So, while the instructions should work based on baking in the IP, this recipe is not guaranteed. With that in mind, she presents you also a boozy option from Epicurious. 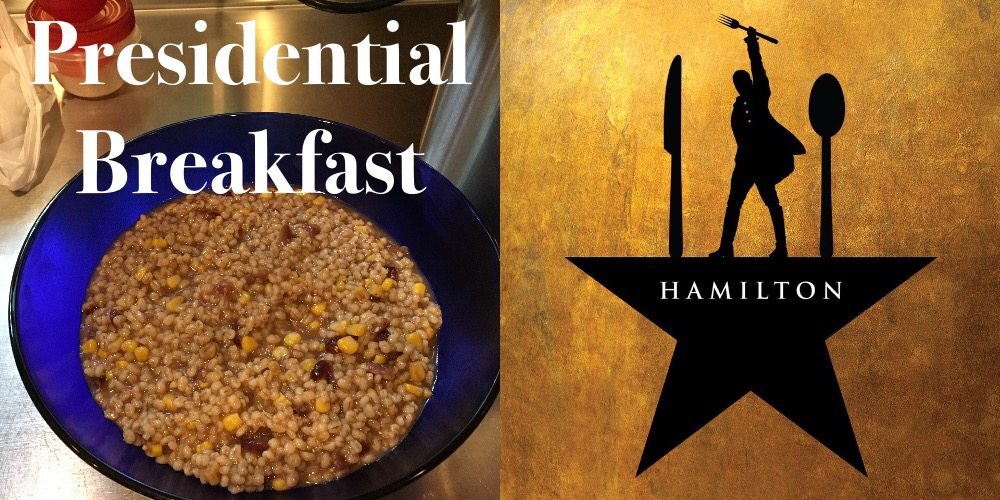 Our first president saw himself not as a soldier or leader but as a farmer. Originally growing tobacco, he found that to be an unsustainable crop and instead focused on grains. Pioneering crop rotation to ensure his farmland would remain fertile, he grew an impressive variety of crops. With this in mind, and with grains being one of his most prominent crops, we offer up this Corn and Barley Hamilton recipe to help you take advantage of the sweet summer corn and the Instant Pot’s ability to quick cook grains. Originally, I intended this to be a cold salad. However, the 1:4 ratio that the instant pot suggested for the barley, combined with the Craisins and frozen corn, left this watery like an oatmeal. If you play around with the liquid (I’d be guessing 3 cups liquid from what was left in the pot), you could get the barley to absorb with nothing left over and have a nifty barley salad.

Okay, lesson one. Just because you can technically do something in the Instant Pot doesn’t mean you should. First time I made the cake, I tested it out three ways–oven, Instant Pot with water, Instant Pot without water. The results are undeniably better in the oven (achieves the right fluffiness and brownness, though part of the denseness could have been because I used all-purpose flour instead of cake flour). Nonetheless, though this Hamilton recipe can be made in the Instant Pot, when it was done, I broiled it for a few minutes for aesthetic reasons (if you have a mini torch like they use for creme brulée, that’d probably work great), but it felt like I was cheating at that point. Second time around, I just made the compote and bought ready-made cake at the store, so that’s also a doable shortcut (but you’ll miss out on the hint of lemon in the cake batter, unless you get some lemon cake, which then means you miss out on the Angelica part of the Hamilton recipe). Regardless, here are the recipes I used for this tribute to the Schuyler sisters. 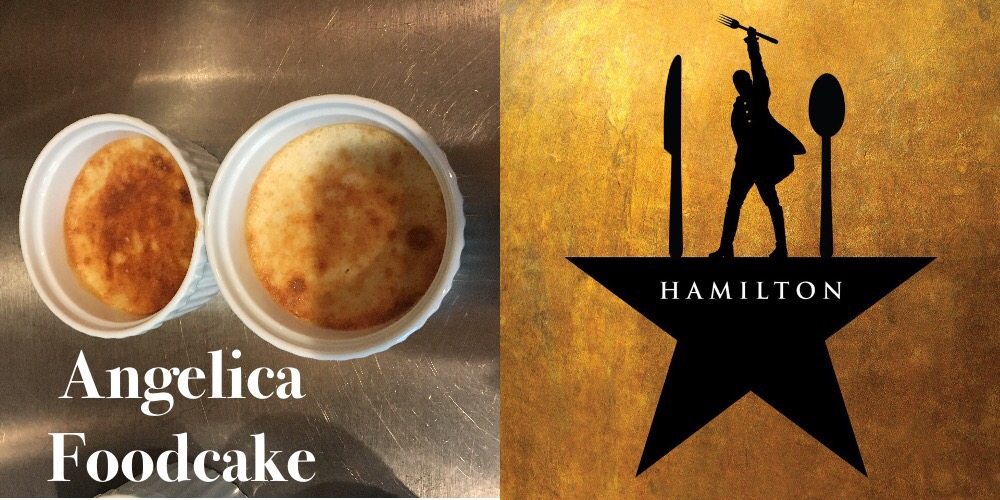 I found this recipe on Key Ingredient and tweaked it slightly (using lemon essence instead of almond extract). 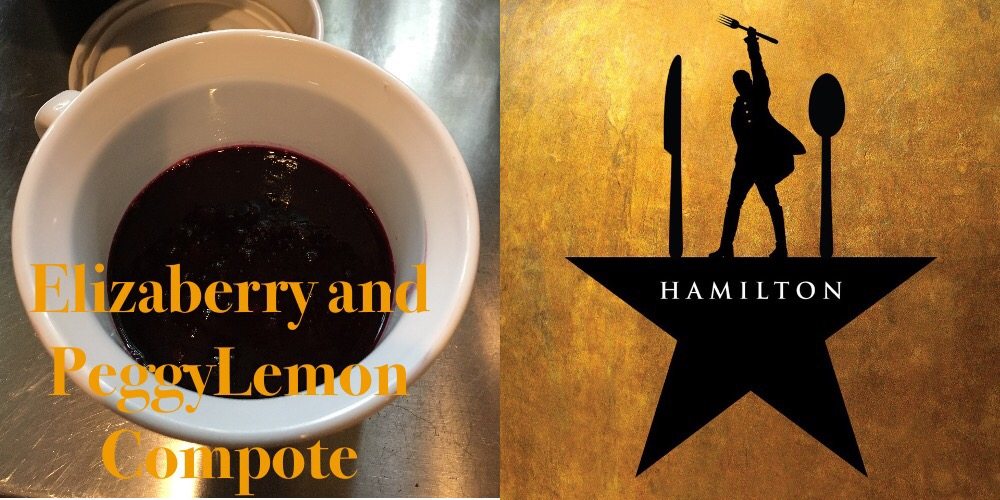 Often Eliza is linked with the color blue, and Peggy with yellow, so this one just seemed natural. And the fact that it’s so simple and tasty makes it a total win!

Drop all ingredients in Instant Pot. Stir (so cornstarch isn’t clumping). Close lid (and pressure valve). Turn on Manual setting for 3 minutes, then let pressure release naturally for at least 10 minutes. Mash slightly (if you want, or leave clumpy if you prefer). Enjoy. 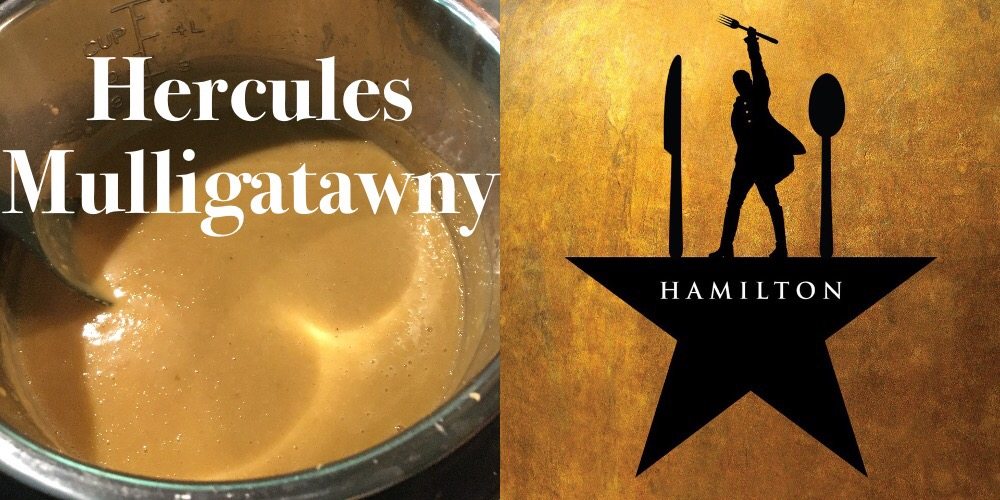 How could we not pay tribute to him? And while this Hamilton recipe isn’t a traditional July 4th dish (it’s soup), it’s forecasted to be rainy here in Cleveland so this may be quite the comfort food. Ideally served over rice. Now, I did take some liberties with this recipe from happybellyfoodie.com. I omitted the heavy cream, and could probably have substituted olive oil for the butter (and omitted the chicken) for an easy vegan version.

Here are some other suggestions for Hamilton-themed recipes to celebrate Independence Day. We just, well, ran out of time before making all these, but if you’re so inclined, we didn’t want you missing out on some great possibilities.

That’s all we have for now. If you make any of these Hamilton-themed recipes for your holiday weekend, or come up with other ideas, be sure to post images and tag @GeekMomBlog on Twitter, Facebook, or Instagram.

Geeked About the Greeks