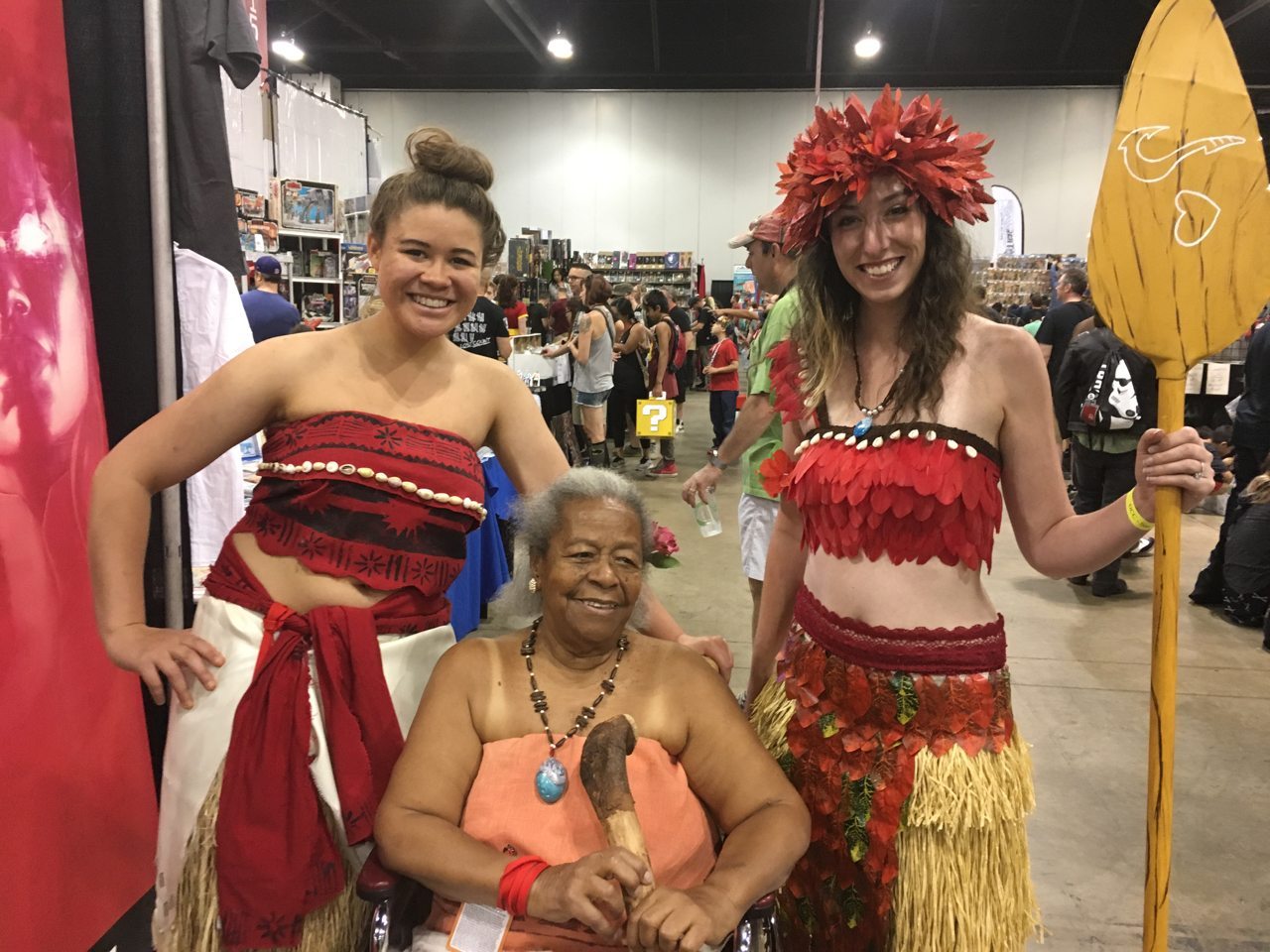 Wow! I can’t believe two days of this year’s Denver Comic Con is behind us already! This was my family’s first day visiting, even though it’s Day 2. We had so much fun getting to know other con-goers, meeting vendors, artists, and getting to know some our favorite stars at panels.

Here’s a summary of Day 2; I’ll be writing more about some of these topics later.

My family lives about one hour from downtown Denver; to avoid the parking costs and nightmares, our family chooses to park at one of Denver’s light rail stations and take the train into the city. There’s a stop at the Colorado Convention Center. In years past, that stop was just a few steps from the media entrance, but this year, that entrance moved to the opposite end of the building. This gave our family an opportunity to walk around the building while folks were waiting in line to get in. Pay a visit to the GeekMom Facebook page and see the video of the guests queued around the convention center.

This year was there were some changes to the event layouts. The locations of panels, celebrity autograph/photo sessions, comic book artist booths, vendors, and gaming were all different from previous years. Heck, even the food service locations changed! Part of this is related to DCC having to share spaces in the Colorado Convention Center in previous years, while this year it appeared DCC was able to secure the entire facility for their fans. These changes took some getting-used-to for many of the veteran DCC guests, but overall, I feel the flow was much smoother. It seemed pretty straightforward to our family: panels and cosplay groups (such as the 501st Legion) were downstairs, everything else was upstairs.

My husband, son, and I had about half an hour to browse the floor before it opened to the general public. We also found the media area where I was able to meet up with GeekDad Randy and meet his family.

Our family was able to get into two panels on Day 2: Weird Al Yankovic and Stranger Thing’s Millie Bobby Brown. I’ll write more about these two panels later this week, but suffice it to say that I was rather disappointed with Weird Al’s panel. He was great, as usual, but the moderator was somewhat plowing through questions, and there ended up not being any time for audience Q & A.

Meanwhile, Miss Brown’s panel was delightful. For a 13-year-old, Millie Bobby Brown carries herself very professionally, all the while keeping her British wit honed against the panel moderator. She appeared to have a lot of fun interacting with her fans, telling stories: from the practical jokes she plays on castmates to her journey from singing for her Dad to starring in the upcoming Godzilla: King of the Monsters [she had just arrived the same morning from her filming location].

If you want to see family cosplay at its finest, Denver Comic Con is the place to be. I am always on the search for creative ideas, and there was no shortage today. Here are some of my favorite families on Day 2:

Best family cosplay I didn’t get to photograph: The father was Negan wielding Lucille, while his two elementary-school-aged sons portrayed Carl Grimes (with eye bandage and sheriff’s hat) and another character wearing a trucker’s cap and plaid shirt…with an eye dangling out (honestly, I wasn’t sure who it was…Glenn is the natural answer but I wasn’t convinced based on the clothing).

The vendors were arranged in numerous “zones;” we noticed clumps of comic book vendors from all over the U.S., general “geek gift” stands selling socks, t-shirts, and stuffed animals, and specialty retailers, such as steampunk, custom art/sculptures, and homemade gifts.

“Mystery Boxes,” which have gained popularity just over the past two years or so, completely dominated the vendor scene. We found one shop, Toynk, out of the Chicago area, that seemed to ONLY be selling mystery boxes, of over a dozen sizes. It became a mission for my youngest son: he browsed several vendors in an attempt to make an educated decision on which mystery box to choose. He chose a middle-of-the-road size/price/quality box. Among other things, it included several Doctor Who gift items, a rather adult Halloween costume, a Portal-themed Rubik’s cube, and a stuffed talking Kylo Ren. My son was disappointed in the selection, but I’m pretty sure he understands that that’s the point of it being a “mystery box.”

GenCon, this is not. There is a very limited tabletop and video gaming section, to which my youngest son gravitated towards the end of our first day. He found a very cute video game that’s currently in test/demo phase, called A Purrtato Tail, by Cerulean Games.

Things I Didn’t Get to See/Do Today

I had several education and comic panels in my schedule today, but I’m afraid those fell by the wayside. As always, my purported schedule is always much fuller than what we’re actually able to accomplish. Several of the panel times overlapped, especially when we had to commit 30 minutes ahead of time to get in line for the celebrity panels.

We also missed out on a Christopher Paolini panel and book-signing, which would have been great to see since both of my sons have read the entire Inheritance Cycle series this past year.

In addition, getting lunch for our family turned into a much-larger task than we were anticipating. I’m glad we had plenty of snacks with us for between meals, but it was a nearly one-hour wait for lunch. The good news is that there was plenty of variety, in multiple price ranges. Tomorrow I’m packing sandwiches.

For Denver Comic Con’s Day 3, it will just be my oldest son and me. My feet are like hamburger now, with a couple of pretty large blisters from my Marge Simpson red-shoes. Tomorrow I will be cosplaying in a more subtle-manner, probably as Hiro Hamada, although I’m not convinced my hair is going to work. We will see.

We are looking forward to the Wallace Shawn and Jon Heder panels, as well as a pretty interesting-looking NASA panel about observing this August’s total solar eclipse. 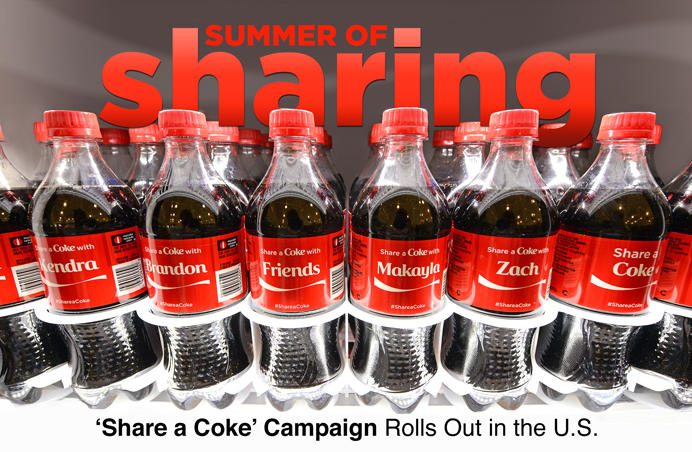 What’s In a Name: Coca-Cola 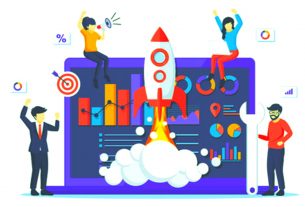