As July 2017 marks the 110th anniversary of the birth of Mexican artist Frida Kahlo, her paintings and drawings (primarily self-portraits) are still celebrated for her depiction of the female experience and her celebration of the Mexican and indigenous cultures.

She is also and artist who showed how to continue to pursue excellence, regardless of the painful experiences of life.

Kahlo was born July 6, 1907 in Coyoacán, Mexico and had a rough journey her entire life. She suffered from polio as youth, and originally wanted to study medicine. When she was a teenager, she was almost killed in a bus accident and with injuries to her spine, pelvis, foot, shoulder and more, which caused her a lifetime of physical pain. This included having more than 30 operations during her life.

While recovering from this initial accident she began to painting. From her bedside, she produced more than 140 works, including her first self-portrait, Self Portrait in a Velvet Dress in 1926. Two great sources for her works and live include the book Frida Kahlo by Luis-Martin Lozano, and for younger readers, and the Frida Kahlo book as part of the Little People, Big Dreams series by Isabel Sanchez Vegar, illustrated by Gee Fan Eng.

One of the best ways to learn about Kahlo’s life is to simply look at her 200 paintings, many of which are self-portraits. Much of her life’s experience, her emotions, fears, loves and thoughts are depicted in her works. This includes some very beautiful, but also some very dark paintings, as she held nothing back in regards to her feelings.

As for style, she was influenced by the realism of European Renaissance masters, and the images and colors of her culture. Her subject matter, however, was surreal, with alter egos, and visual representations of her emotions. Kahlo never called her work surreal, but instead depictions of her own reality.

These paintings covered everything from the gory details of her post-accident recovery, such as The Broken Column, to her tumultuous marriage, divorce and re-marriage to fellow artist Diego Rivera, as depicted in The Two Fridas. Some common items seen in her works includes Pre-Columbian artifacts, jewelry, medical instruments and other images of the “reality” she created through her works.

Like many artists whose works continue to inspire, Kahlo didn’t sell many of her paintings during her lifetime. She did do a few commissions, and only had one solo exhibition in 1953, on year before she died at age 47.

Today, however, Kahlo’s legacy has achieved near cult status, with fans of her work from all over the world. Her self portrait, Roots, sold in 2006 at Sotheby’s auction for $5.62 million. This set the record for the most expensive Latin American work ever purchased at auction. During her lifetime, the highest she was paid for a painting was 4,000 Pesos (around $1,000 at the time) in 1947.

Kahlo’s life was filled with many instances of physical, mental and emotional pain, but she was able to use her talents and imagination to bring some peace to herself and leave some amazing works behind for many generations to come.

“Painting completed my life,” she said.

The Project: Alter Egos and Alter-Realities

One of Kahlo’s most famous pieces is The Two Fridas, which she painted shortly after her short-lived divorce from Diego Rivera depicting the Kahlo felt was the Frida Rivera loved and the one he betrayed. There are two personalities, both with visible hearts. One is broken with an artery cut off by a surgical pincers to stop the bleeding. The two “Fridas” are holding hands. Kahlo had later expressed this showed her sadness from her separation from Rivera, but she also once said it was inspired by the memory of an imaginary childhood friend.

Kahlo’s own paintings throughout her life were very much like creating, in a way new friends, or in some cases showing the alter egos we all exhibit to get us through different hard times.

For this project, let’s use Kahlo’s famous piece to discover how alter egos play a large part in many of today’s favorite fictional characters.

Kahlo’s painting showed one identity as more vulnerable, and one as stronger, more independent. A familiar tale, isn’t it?

Batman or Iron Man’s thick armor covers a two lonely sons battling inner demons. What if Two-Face’s or Typhoid Mary’s “two halves” separated into two independent persons? Everyone, good or bad, has more than one version of themselves. Even Harry Potter has a patronus (although technically not an alter ego), as a form of protection.

Kahlo’s style, although filled with surreal images, was realism, so don’t feel you have to be as good a portraitist as her. Instead, sketch out your idea in pencil and use it as a sort of paint-by-numbers outline for watercolor, acrylic, markers or craft paint. The medium is entirely up to you.

Since Kahlo was an accomplished painter, she was able to create nearly identical versions of her own image, yet each with an entirely different personality, as in her double self-portrait, The Two Fridas. For the rest of us, there’s an easy three-step “cheat” to making mirror images of a figure:

• Draw one image on the left side of a piece of drawing paper, facing toward the right.

• Fold the right side over, and trace the image on the outside of the folded paper (use a light pad or hold the paper up to a window if you need help seeing through the paper.

•  Open the folded paper back up, and trace the image on the right once again, this time on the right side. This will result in two mirror images, facing each other.

It doesn’t have to be exactly her painting style, but capture the spirit of how well Kahlo is able to turn one person (herself) into an entire world of her own.

What are the different traits of the two personas of one person depicted in a painting? For example, what makes Bruce Banner more vulnerable (or stronger) than Hulk? Would they hold hands for support or be clutching two sides of a common object? What is the background like around them? What objects to they keep nearby? When (and why) are they sometimes lonely?

This is just a simple drawing project, but there is a lot to think about before setting pencil to paper.

Kahlo’s own portraits were not only a study in the events of her life, as well as the emotional state she felt at these times, they were for her a way to deal with something everyone experiences sometimes: loneliness. 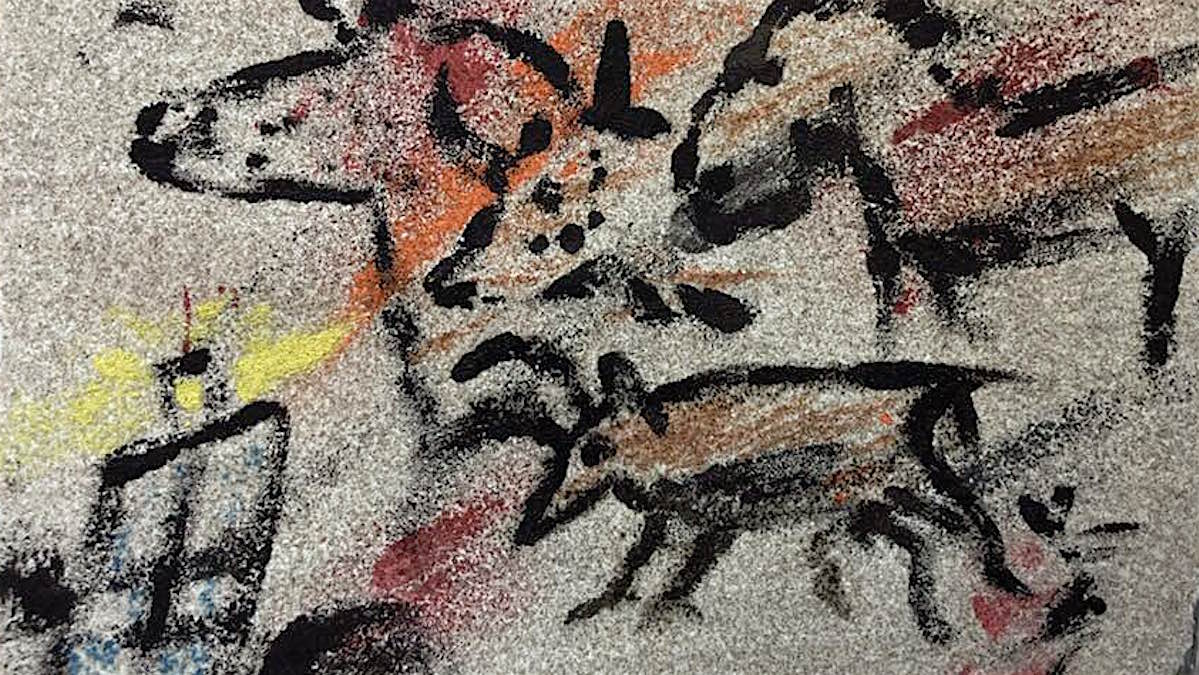 Be the Artist: Parietal Art From the Stone Age