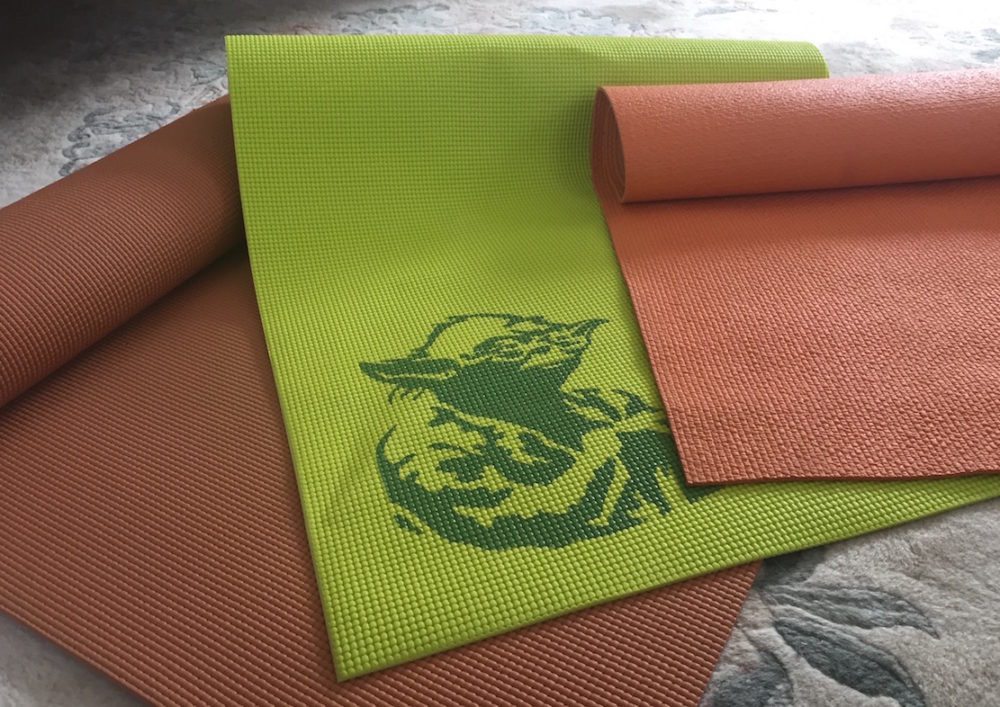 I’ve been practicing yoga on my own, at home, for 16 years. This week, encouraged by a pair of friends, I took my very first studio class. I was thrilled for so many reasons: an hour out of the house, the company of two friends willing to do yoga with me, a yoga teacher not based on YouTube! But mostly, I was excited to take the Christmas present my husband had given me out for a trial run. It’s a yoga mat with Yoda and the words “Do or Do Not. There Is No Try” at the bottom of the mat  — a Yoda mat, if you will.

I walked into that studio, unrolled the Yoda mat, grinned at my friends, and got into the practice. That is where things started going wrong. Yoda was not holding down his end of the mat/yogi bargain. The mat slipped on the studio floor, and my feet slipped on the mat. I adjusted my footing and tried again, but Yoda kept sliding around and bunching up under my feet. A familiar sense of disappointment crept into my yogic calm: the Yoda mat is yet another case of style over substance in the geek sporting goods industry.

I am certain I’m not the only one who has had this experience. And yes, I know there is quality geekwear out there, but for years, manufacturers have branded cheap merch with beloved fandoms, and expected fans to buy it. And we have. It’s a beloved tradition, dating back to our childhoods, when we begged our parents for that Barbie/G.I. Joe/Smurf lunchbox that broke by the second week of school. And listen, I do the same thing with my own child.

We fans are complicit in this — I know I am. I drop coin on cheap branded merch all the time, despite my best intentions: I have LOTR leggings that are super uncomfortable to wear (even if I’m not doing anything active), and geeky sneakers that can’t be trusted to do any real walking or running. I have a Wonder Woman sweatshirt that doesn’t keep me warm, tee shirts that don’t conform to any standard sizing, and various baseball caps I don’t wear for yardwork because they simply can’t take the abuse my Red Sox cap can.

I’ve been sucked in by branding more times than I can count. Mostly I justify it, because, no, I will never wear those Middle-Earth leggings for yoga or jogging or hiking, but if I can tolerate the discomfort for a while, they look cute under a tunic. Same thing for most of my other geeky activewear; if I treat it as fashion, there is no need for it to perform as activewear.

I cannot use the fashion justification for a yoga mat, though. A mat has just one job: to help you stay anchored so that you don’t slip and injure yourself. Yoda’s going to get me hurt, maybe not in a go-fight-Darth-Vader-even-though-you’re-not-ready way, but I’ll get hurt nonetheless.

Maybe it’s time that as geeks, we stop spending money on anything that has Darth Vader or Batman on it, and start voting for better products with our wallet. I know I have to make a commitment to more conscious spending, especially as my son a) reaches an age that requires sporting equipment and b) starts begging me for whatever the 2017 version of the cheap Smurf lunchbox is.

As for myself, next time I go to the studio, I’m going to take my old mat, one that’s as brown and boring as the dunes of Tatooine (and also, a lot safer).

PS – This is a problem with women’s activewear in general — a lot of it is made for appearance rather than performance, which reminds me of one of my favorite YouTube videos ever. Please do yourself a favor and watch this. But be warned: you may never again be able to say “activewear” without bursting into song.

The Unoffical Hunger Games Cookbook: From Lamb Stew To “Groosling”

1 thought on “The Case for Geeky Activewear That Actually Performs”