A few weeks ago, I wrote about Jeremy Whitley and Elsa Charretier’s The Unstoppable Wasp.

I’m writing about it again because this book… guys, this book is something special.

I’m not the only one in the family who thinks so, by the way; the boy can often be found in the corner of our “L” couch engrossed in a re-read of issue #1 (#2 just came out this past Wednesday and it’s been hiding in my stack). The girl sits very, very still and says nary a word while I read it to her. The former is happening more and more with books and comics in general as Izzy gets more comfortable with reading but Zora? Zora never sits still nor does her mouth stay still for more than 45 or so seconds at time when she’s conscious. That The Unstoppable Wasp should evoke that sort of devotion is a recommendation unto itself.

What holds them so rapt?

The colors. The art. The stories. The characters.

That last is what’s reeling me in: the myriad possibilities Nadia sees for herself, for women in science, and for all of us. A kinder world. A world in which science and rationality guide action rather than fear and ignorance. A world in which women’s, and girls’, contributions to science and engineering and tech are acknowledged as readily, openly, and equally, as men’s.

S.H.I.E.L.D. keeps a list, you see, of the smartest people on the planet. And, until recently, despite the efforts of women like Bobbi Morse, the top 20 has been dominated by men. Lunella Lafayette, also known as Moon Girl, is now designated the most intelligent denizen of Earth-616 but despite the acknowledgement of her superior mental prowess, no one reassessed the other slots and no other women moved up. The rest of the prime spots continue to be held by Stark, Banner, Hank Pym, and the other usual suspects, all of whom are men.

Nadia is not okay with the way things have Always Been.

She decides Something Must Be Done.

If she were someone else, that Something would be clawing her way to a superior position, a hostile takeover of those between her and the top. Wanton destruction of data and invention. A figurative, or perhaps literal, bloodletting.

Why? Because in our society, the prevailing attitude is: in order to lift oneself up, one must break others down. One must lay waste to works and reputations, even to lives, to get ahead. One must obliterate so one may stand on the ash heap and know, for a moment, he owns all he can survey.

Until, of course, someone else does the same to him and he ends up more ash in the heap.

Not our Nadia, though. Our Nadia has a better idea.

Nadia has a different view on life, the universe, and everything, one from which we should learn, one we must teach. Having been sequestered in the Red Room all of her life, having only recently found her freedom, Nadia views the entire world as a gift waiting to be opened. There’s no need to spoil what has been because she sees what can be. She can acknowledge the amazing work of those who came before without denigrating it and can, at the same time, see beyond that horizon to so much more.

She has resources. She has assistance in the person of Jarvis. She has determination to change the world for the better, and she has heart.

She has everything she needs to succeed on a quest.

That quest? To assemble the brightest, female, scientific minds in New York and bring lady-led super science to everyone in the form of Genius in Action Research Labs. G.I.R.L. will not make weapons. It will not stand for neither spying nor oppression. G.I.R.L. will dream and do and make the world a better place for everyone.

The Agents of G.I.R.L. will not step over others. They will not tear down and claim space previously belonging to another. They will forge a new path together.

G.I.R.L. will create something new upon the foundation of what came before, respectful but refusing to be limited.

They will “go high.”

As soon as they take care of the giant rat problem.

They can do all of that because they know something we, as a society, have often failed to realize: there is no critical mass of awesome in the world. There is no conservation of awesome. Awesome is unlimited and infinite. There is no such thing as too much creativity, too much beauty, too much joy, too much innovation, too much literature or art or science. We are a curious species, one which strives and we’d be so much further along if we’d learned to expand instead of contract eons ago.

The good news? It’s never too late to start.

Join Nadia and her first two recruits, Taina Miranda and Lunella Lafayette, in choosing a different path. Choose to create instead of destroy, to forge, to construct, to bridge. Open your eyes to everything the world has to offer instead of being stuck in the rut of history and habit. Discard the status quo in favor of equal opportunity and kindness and hope.

Tell your friends. Tell your kids. Tell everyone who will listen and especially those who won’t (they probably need to hear it the most).

All hands on deck, people.

We’re going to need you and your awesome. 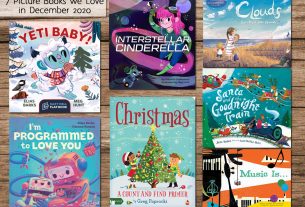 7 Picture Books to Enjoy With Young Readers This December