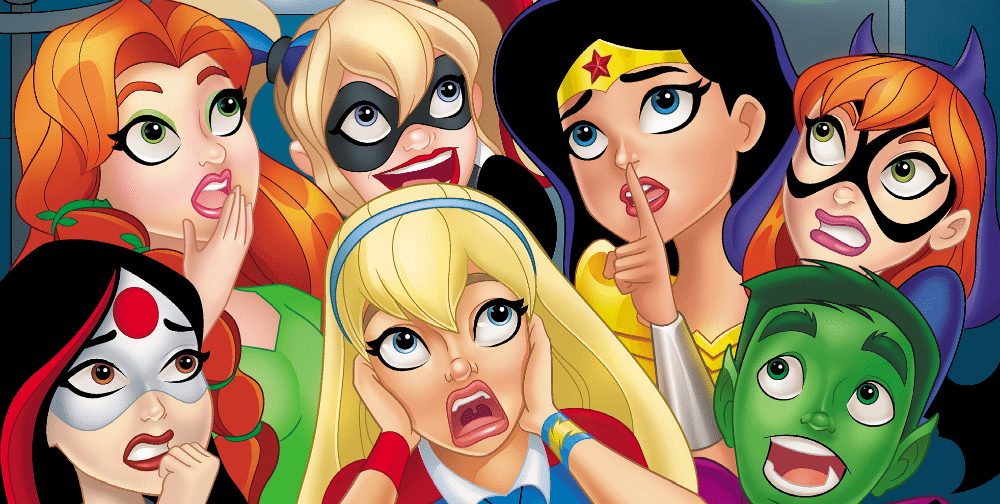 DC Super Hero Girls has hit a sweet spot with young fans of all things Superhero. We have female action figures, comics, webisodes, and costumes (I say we collectively because of course, I have to bring my own Batgirl to play with my daughter’s Wonder Woman).  I often find myself in conversations about the series all the way from the school gate to my Women’s Comic Book Meets.

The latest adventures are now available in digital chapters. I recently spent some time chatting with writer Shea Fontana and artist Agnes Garbowska. To be completely frank, I was a little in awe of talking with these creative ladies.

Yes, Evil Genius Mum was a tad fan-girl during the interview. Aw c’mon! Not only are these ladies super-impressive with their artistic expression, but they are spot-on with their Evil Genius: they found a way to bring positive female relationships to young readers!

Evil Genius Mum:
Congratulations with the ongoing success of the DC Super Hero Girls series. The latest digital issues look fantastic! Now, I know the series is Shea’s baby, but the latest issue (out January 18), is that all you, Shea? Or did Agnes have some input in the design and story as well?
Agnes:
Oh, the writing is all Shea. I had a lot to do with costume design and the general illustration. I did a lot of research into the costumes for the time travel because I wanted to make sure I had it just right.
EG Mum:
So Shea, how did you pick the historic figures in this chapter?
Shea:
We wanted DC girls to meet their own heroes. Show the audience who we think would be the real life heroes who would inspire our DC Super Hero Girls. Emily Dickinson was my definitely my hero, my ‘writer hero’. When I was a kid, I read her poems a lot. And she kind of fits to Harley Quinn and her creative side. And Amelia Earhart is the most adventurous real-life hero. She was just perfect to inspire Batgirl. The thing is, we really wanted to tie it in with real-life people. Show that connection.
Agnes:
I spent a lot of time researching the costumes of the eras, studying photos of the people then. I was trying to look at the outfits of the time and transfer it to the DC Super Hero style. All of the outfits are very different to each other, the characters are different to each other. However, we have this real respect for these great historical figures. I mean, drawing Emily Dickinson reminded me of the poetry I read as a kid too. She is so significant to me. I wanted to capture that in the illustrations, and show our readers how great these real-life heroes were.

Those positive role models are so important to kids, and you have definitely been presenting it so well. What I particularly liked about this issue is the supportive nature of the main characters. We have all heard the stereotype of women beating down other women, but your characters are really about lifting each other up. Was this a conscious effort in the writing?
Shea:
We really wanted the characters to be friends and good examples of being friends. Good supportive female relationships are so important. If it wasn’t for some of my female friends, I would be a very different person to who I am today. It comes from my own experiences and realizing a lot of the time the media shows a more dramatic relationship. We really want to model supportive friendships. Sure, there’s conflict but it is more about learning who you are as a person and what you bring to the relationship. That’s what all these characters are about. They are all set around the same age-group, high school students because this is the time you really start to find out who you are.
EG Mum:
Well, this provides an interesting contrast with the expression of Harley’s insecurities and her self-discovery. There has been a lot of discussion about DC Canon Harley Quinn and her unhealthy relationship with The Joker—including how inappropriate it is as an example for young girls. You’ve stated previously you want to reinvent the characters by keeping their essential DNA while removing their “baggage”. How can you develop Harley’s character without the relationship with The Joker? How are you going to keep her DNA and show her awesome survivor personality as a high school teen?
Shea:
That’s something we really want to approach—with Harley, it has been really interesting because she is a really fun character. But sometimes she is hiding her insecurities and what is going on emotionally. I mean, you see this in real life. Sometimes, those who have it all together may be genuinely struggling underneath. Harley is getting to that point in this issue where she is thinking her friends don’t value her. When you have no traditional superpowers, it would be totally natural to feel out of place next to people who can shoot lasers from their eyes. It’s been fun getting into the character that way. You can see that there are some issues for Harley, and just like real life they are going to take a little time to work out.
EG Mum:
Agnes, I’ve got to say. You’re artwork in capturing Harley within those insecurities was amazing. You really brought out the emotional expression for how she was feeling.
Agnes:
Aw, thank you! Drawing Harley…She is a good role model in this series. She is so expressive! She puts up a big front and she really tries to be part of it, but she feels like she is failing. It shows the real relationship between the girls and the great learning experience that comes with it.

EG Mum:
That must be tricky to work with, working with an established style or format for the characters. But I’ve noticed a few little whimsical touches there, especially around the eyes…
Agnes:
(laughs) Oh, it’s really funny! The main thing is we stick to the model, but I’m known for very whimsical, friendly art. Facial expression and eyes tend to carry over with my art. Cute things always carry over to the face, and it’s something I do unconsciously. Even a sad pose can have the body slump forward, and I like to bring my girly touches.
EG Mum:
They really work well with Harley’s emotion and insecurities. It really brought it to the focus.
Now for the last question, it’s for both of you and it comes from a few of my younger minions who are huge fans of your work. Which DC Superhero character would your High School-self relate to the most and why?
Shea:
Oh, Wonder Woman! I was always studying, and trying to control stuff. I’m always trying to use Wonder Woman as my proxy. Her biggest thing is she needs to understand she can’t control everything. I kind of know a bit about that…
Agnes:
For me, it’s a close call between Harley and Bumblebee. I was always very happy and go-lucky and optimistic, but I was also very hard on myself. In fact, working on Issue #8, I’ve been realising how much I have in common with Harley. I mean, I’ve really had to come to terms with my insecurities and self-doubt. Really believing in myself and trusting my positive friendships. We kind of all have a little Harley in us, but this issue really made me face it. It was so great working on it!

These digital issues are perfect for reading with your spawnlings. If you haven’t read any of the DC Super Hero Girls digital comics before, DC is holding a special promotion to give you a taste. From now until the end of this month (1/31/2017), DC is offering the first two digital chapters for FREE on readdcentertainment.com. You will need to have an account and then head to www.readdcentertainment.com/redeem with the special promo code: PASTTIMES2017

'Reading Rainbow' For The Next Generation