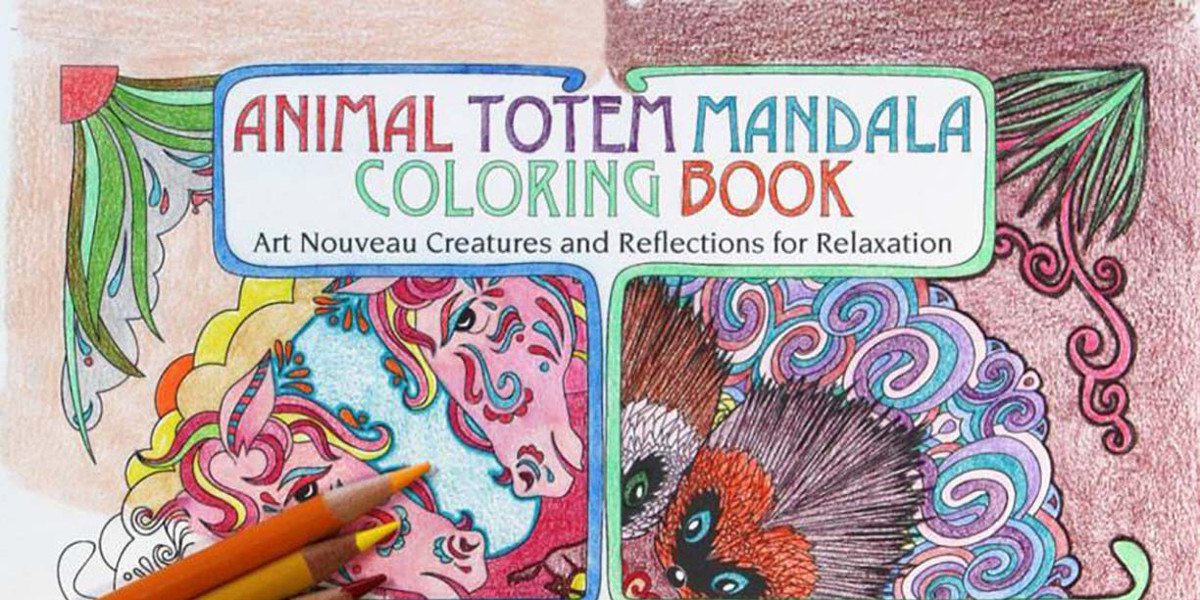 This week’s post is from GeekMom writer Natalie Zaman, who is also a writer of fantastical fiction and magical non-fiction. She’s joined by her co-author, illustrator Wendy Martin and they’re going to talk about their process in creating their project, the Totem Animal Mandala Coloring Book with Reflections for Relaxation:

I’ve always loved Wendy Martin’s work. I’ve watched it evolve from her Pagan-themed picture books (portraying character diversity in age, size, and ethnicity–check out Smoky and the Feast of Mabon penned by New York Times Bestselling author Cathrynne M. Valente) to wickedly detailed Art Nouveau single illustrations. Plus, we’re pals, so I was excited as well as intrigued when she suggested we do a project together.

Sales of her ABCs of Lesser Known Goddesses coloring book had seen a surge with the adult coloring book trend. I know there are tons of coloring books on the market now, but for me, coloring has always been a “thing.” When I was teaching, I used Dover’s Cathedral Stained Glass Windows coloring book as supplemental material for the Renaissance unit that was part of the high school curriculum. Coloring unleashes creativity. It’s comforting because anyone can do it. With these pages, we turned our classroom into a cathedral, and the activity helped my students get comfortable with the period, and as a result, the poetry and plays we read seemed a little less daunting.

When Wendy suggested that our collaborative effort should be a coloring book, I was confused. I… can’t draw. But she had something else in mind. There’s a huge variety of coloring books out there–every kind of illustration imaginable, every kind of style. Truly, there’s something for everyone. But what if you could include messages with those images–words, only a few that could connect you to the visual on a deeper level? Coloring is already a relaxing and meditative activity–add focused intention and the potential for personal growth, understanding and release and enlightenment increases.

For our foray into this experiment, we would pair each coloring page–an animal rendered in a kaleidoscopic mandala–with a guided meditation. There was a bit of back and forth about which animals we should use: real or fantastic? Farmyard or sea creatures? Or maybe a little of everything? We also wanted to produce the book quickly, so after a slew of Google searches like “most popular animals,” “cutest animals,” and “best loved animals” we made our own list of 100 critters with no specific breeds or types and then narrowed it down to 25 by process of elimination, hopefully ending up with a nice variety. Ultimately, we upped the number to 30. Some were definitely personal preference. My favorites were (and are) bat, buffalo (LOVE him, so spiritual) and pig. Pig is just adorable. Look at his face–you’ll want to kiss it.

Once we had our list together, I went first, writing the meditations. Coloring really is its own process, and I wanted to be careful not to weigh it down with too many words. I decided on a simple, 3 step guided mediation to the reader could use or not, in whole or in part (each step can work independently) to enhance their experience of Wendy’s wonderful kaleidoscopic creatures: Three key words. A brief description.The animal’s message for you. How do these beasts color your world; in what shades do you perceive them?

Natalie and I have known each other for years. We collaborated for a while in the beginning of her ezine, Broomstix, with her requesting art for the themed issues. I have always enjoyed her positive outlook and her writing style. But, our age-group focus in the children’s book industry was different, her with young adult and me much younger, with picture books.

My ABCs coloring book was published in 2011, long before the upsurge in this grown-up coloring book trend gained momentum. In the intervening years, I have improved both my process for and my final creations of art. A series of mentorship classes and intensive practice to improve on my part, have caused my Art Nouveau style to mature and solidify. Looking back at the art in the ABCs coloring book, it occurred to me, I could do this better now. But, I wanted to concentrate on the artwork. One of the things which makes the ABCs book special is the little bits of information that accompanies the images.

I asked Natalie if she wanted to create a coloring book with me. She said, “I can’t draw.” I said, “You don’t have to. I want you to write.” I showed her an old kaleidoscopic coloringpage of a wolf pup I have done years ago and explained I wanted to do a bunch of animals in a similar fashion, but I wanted her to write a small paragraph for each one. Natalie ran with it, her enthusiasm gaining momentum as we came closer to finalizing the idea of what we planned to do. She asked me what I wanted her to write, and I told her to write from the heart, to come up with something wonderful and I would draw the images based on her text.

Natalie sent me her rough draft of the initial 25 animals and I read through it, making a comment or suggestion to tighten wording or change wording here and there. Then I got to work. First thing I do when approaching any subject is researching for reference on the internet. I would fill my mental store house with all the imagery I could find on the animal in question before pulling out the sketchbook and drawing the idea for each mandala. In a way, I let the animals tell me who they were and how they wanted to be portrayed. Some were serious, some silly and some just plain cute. Once the pencil sketches were done, I scanned them in and did the final line art in Adobe Illustrator. I tend to work with a more delicate line weight than the typical coloring book art, it suits the Art Nouveau styling.


I didn’t want the images to be too similar or repetitive, so the number of times each animal shows up in its mandala varies from 1 to 12. Each mandala also has matching corner embellishments, which are mirrored again on the framing of the accompanying meditation page.

When I was finished with the 25 animals, we were a month ahead of schedule, so I asked Natalie if she wouldn’t mind writing meditations for 5 additional creatures. We selected images we both loved that we thought would round out the animals already on the list. Sadly, we had to leave some out of this book.

Working with Natalie was a dream come true. I’ve never had a project go so smoothly. We both were as enthusiastic at the end of the process as we had been at the start. In fact, we were talking about what new projects we could come up with soon after sending the finals for approval to the publisher.

A transplanted New Yorker now living in Missouri, Wendy Martin has been working as an illustrator for 25+ years. Wendy’s love affair with art began at an early age. One of her earliest memories is of sitting with a pile of crayons and papers strewn around her proclaiming to her parents that someday everyone in the world would be looking at her art. Her career began in advertising and graphic design in New York, in 2000, she turned her focus to her true love, children’s books. An Ordinary Girl, A Magical Child, released in 2008, became a finalist in the 2009 international COVR awards. She most recently illustrated The Story Circle, released May 2016. Wendy traded in her crayons for watercolor, pen and ink, and a computer.

Natalie Zaman is the co-author of three Young Adult novels: Sirenz and Sirenz Back In Fashion (Flux) and Blonde Ops (MacMillan). A regular contributor to various Llewellyn annual publications, she also writes the recurring travel feature “Wandering Witch” for Witches & Pagans Magazine, and her work has also appeared in FATE, Sage Woman and newWitch magazines. Her spiritual travel companion, Magical Destinations of the Northeast: Sacred Sites, Occult Oddities and Magical Monuments will be published by Llewellyn in the fall of 2016. When she’s not on the road she’s chasing free range hens in her magical and self-sufficient back garden.