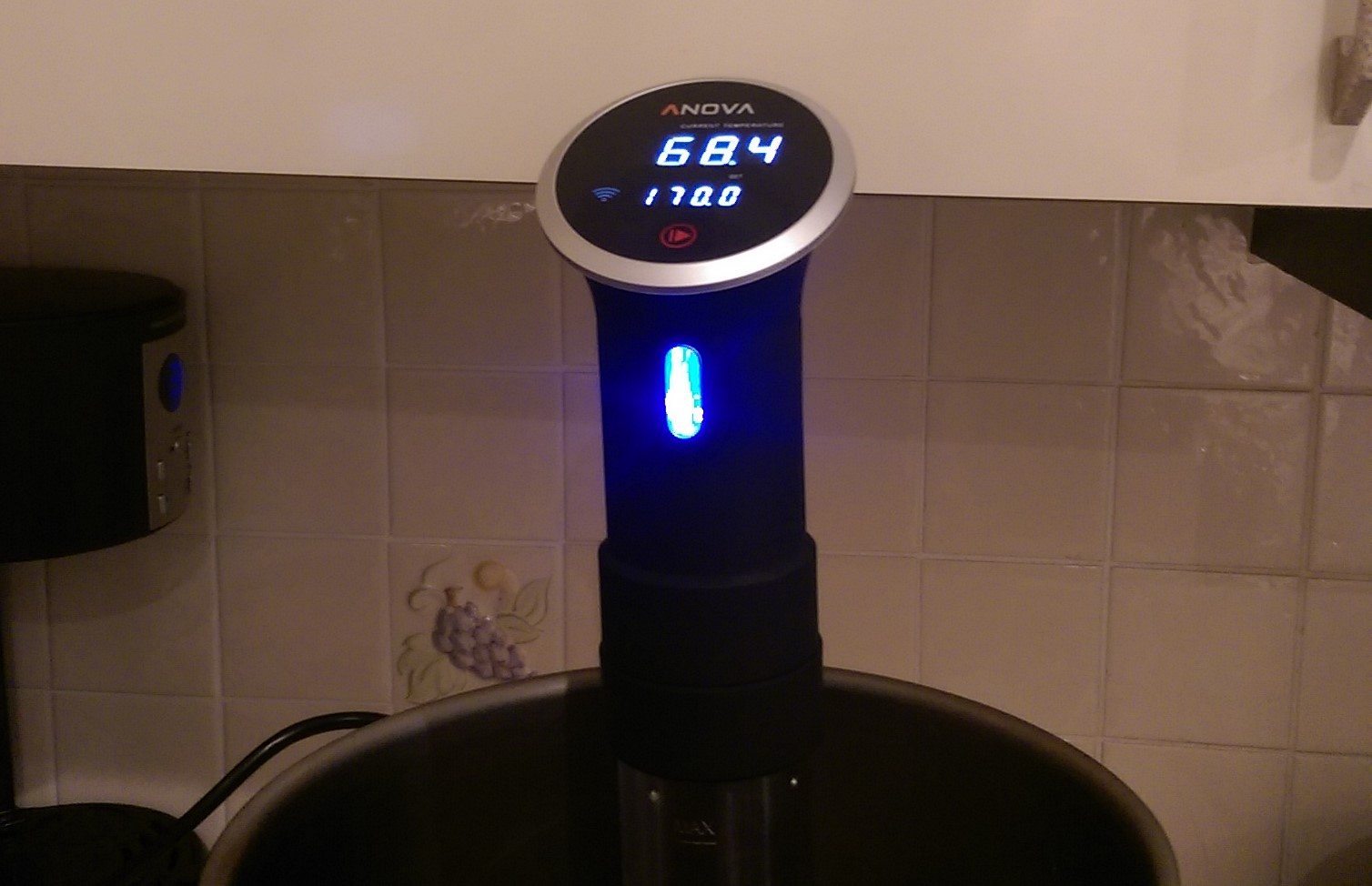 Cooking has always been something I’ve enjoyed, which is lucky seeing as this family of 6 makes meals from scratch for the most part. We are also Sabbath-observant, so every Thursday night and Friday is spent in a frenzy of cooking.

I’d been thinking about taking the idea of molecular gastronomy out of the magazines and websites I was reading and into my kitchen, but I constantly psyched myself out. Sous vide in particular seemed an accessible and useful tool, but I shied away from experimenting with it.

For those not in the know, sous vide is a method of cooking which entails sealing food in a plastic bag (usually vacuum sealed, but Ziplocs work in a pinch) and leaving it in a warm water bath at the precise temperature to which you want it cooked. Sous vide is particularly famous for cooking roasts to the doneness you want from tip-to-tip rather than the typical gradient one usually gets in a roast or steak of an outer crust, a layer of medium-done or above, and a middle of the doneness you actually want.

I’m a fan of crockpots, given the right recipe (we use beef marrow bones in place of ham). The first thing about sous vide that appealed to me was a similar ability to set up your cooking ahead of time and have it ready when you need it, within certain limitations. Anova’s Precision Cooker with wifi offered a simple and user-friendly way to start. Anova has recently teamed up with Serious Eats, and their app features many Serious Eats recipes.

When my Anova review unit arrived, I downloaded the app and the instruction manual, and off I went. The first thing I attempted was an egg. I know, how boring. But in truth, eggs are one of the more fascinating foods out there. We all have our preferences for how they’re cooked, and there’s been a lot of time spent learning how to get every consistency from runny to pudding-like, fudgy to firm.

There’s been a lot of talk in the culinary world about eggs cooked at low temperatures, 62-65 degrees Celsius. I was curious to see what my chef friends were so excited about. I cooked a 63-degree (Celsius) egg for an hour based on the recommendation of one of my chef friends, and it indeed was exactly the consistency I would have wanted to top a rich salad or hamburger.

Anova’s settings are simple – there is a scroll wheel for temperature and a play/pause button (pictured below). There is an adjustable nut that allows you to put the Anova in and out of the clamp sleeve, which gives you the ability to direct the water flow as you prefer. The sleeve has a clamp (pictured below) that easily hooks onto the side your pot. The main play/pause button not only starts and stops the unit, it switches your temperature settings between Fahrenheit and Celsius and allows you to set a timer.

Some users have complained that setting the timer means the unit also switches temperature scales. While this is true, I found it not to be much of an issue. First, it’s a simple 3-second button press to switch back. Second, to avoid that issue you can simply use the app to set a timer (pictured below). Third, other than for something like a very precisely cooked egg, the point of sous vide is to maintain a specific temperature, not to have it in for an exact amount of time. I have thus far only used the timer for egg recipes where the egg is not supposed to fully cook.

My next experiment was with a silver tip roast. With the help of Modernist Cooking, I figured out a time and temperature to attempt. The roast went in at 160 degrees Fahrenheit, and it cooked for 18 hours. It came out medium-rare from tip to tip. My mistake was in not factoring in that a post-sous vide sear would further cook the meat.

Instead of the beautiful medium-rare roast, I’d pulled from the pot, I had a straight medium piece of meat. I took the juices that had collected in my cooking bag and made a quick gravy out of them. All told my active prep/cooking time for a roast with a mushroom-onion gravy was 5 minutes for seasoning and placing the meat in the bag, 8 minutes of searing, and 15 minutes of prepping a gravy. Even though my results weren’t exactly what I wanted, I was quite happy with the potential. I just needed to fine-tune it on my end.

The next food I used in the Anova was a series of thin California cuts. They went in for 2 hours at 160, then were seared for about 30 seconds per side. My 5-year old tasted a slice and declared it the single best meat he’d ever had. The aromas were incredible as everything was sealed in and cooked together.

I didn’t want to dump out the water after my meat was done, so I cooked some eggs at 73 degrees Celcius for 23 minutes, based on the parameters I entered into the Chef Steps Egg Calculator. I ended up with a perfect, gorgeous, fudgy yolk, and whites that slid right down to the plate. I was delighted. I plan to continue to play with the calculator and find different methods to get the egg I want every time.

I later tried Anova’s recipe for hard-boiled eggs, 170 degrees Fahrenheit for 1 hour. The recipe doesn’t call for putting them in a bag although in some of the Anova literature it says not to put any unsealed food in the pot with the unit. The eggs were fine, not overdone, but hard to peel. Normally when I’m hard-boiling an egg I poke a hole at the fatter end with a thumbtack to make it easier to peel. I can’t imagine it would be a problem to do that in this case, but I didn’t want to chance it. I didn’t try it, but an Anova could also be used to pasteurize your raw eggs at home for when you make meringues, caesar dressings, or icings.

My final experiment (thus far) was a chuck eye roast. Normally I would sear and roast this cut and power through its tendency to be chewy or braise it. It can end up soft, but if you’re not careful when you slice it, it can fall apart. After reading up some more on sous vide techniques and temperatures for meat, I set up the Anova at 134 degrees Fahrenheit for 36 hours. When I took the roast out and seared it, it hit a gorgeous medium rare. And I’d only spent about 10-12 minutes actually working the meat! The chuck went from being a cheap tasting cut to having a steak-like consistency. The extended cooking time had tenderized the meat in a remarkable way.

The Anova is a dream come true for this geek mom. I love that I can scroll through the app, find the recipe I want, and set my Anova up with one click. Upping my cooking game with meat doesn’t hurt either.

Anova with wifi retails for $199. It’s a big ticket item, but for busy parents who appreciate good food, there is no better gift you can find this holiday season.

Board Games for Newbs and Kids!