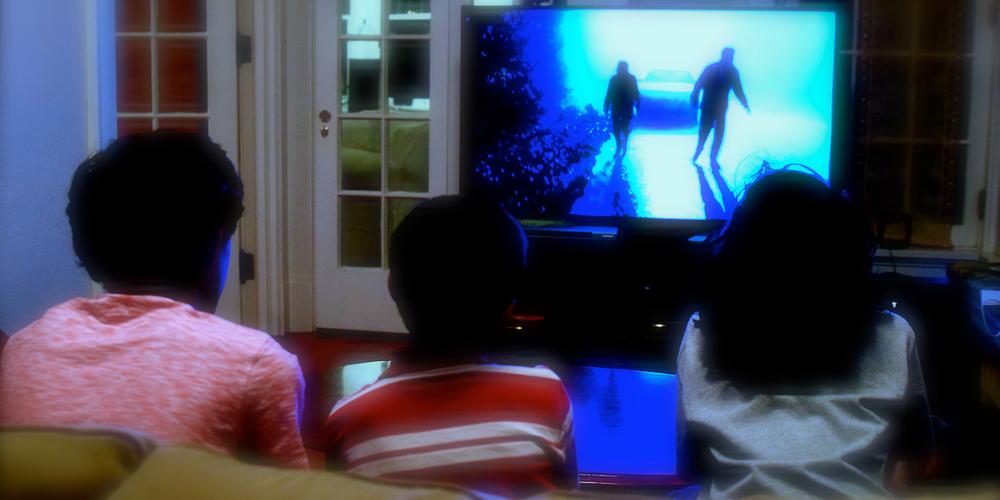 Plenty declare television as a parenting plague, the bane of childhood development. To that I say poppycock and pishtosh.

Here’s why I let my kids watch television and it has to do with building connections.

But first, let’s look at why television is supposed to be so bad for us.

When we first joined the Montessori world eleven years ago, we received a flier about the dangers of watching television, taken from “Unplugging the Plug-In Drug” by Marie Winn (New York: Viking, 1987).  Here they are:

2. Television competes (and generally wins) against alternative family activities. (Children will often reject activities such as listening to a story or playing a game in favor of passive pleasure of TV-watching.)

3. Television interferes with the social development of children. (Watching TV does not require any sort of interaction with others.)

4. Television takes the place of play. (Just when children are ready to acquire and develop important playing skills, parents begin to use TV as a babysitter.)

5. Television renders children less resourceful. (Because TV is so easily available to children, it tends to serve as a universal “filler,” inhibiting the development of creative skills for which quiet of “down” time is a prerequisite.)

6. Television has a negative impact on children’s physical fitness. (Many scientific studies have found direct relationships between incidence of obesity among children and time spent watching TV.)

7. Television has a negative effect on school achievement. (Kids who watch excessive amounts of TV have less time to read and to do homework.  They stay up later and go to school tired. Statistics show that heavy TV watchers score lower on most achievement tests.)

8. Television watching may be serious addiction. (Compulsive viewers turn to TV for solace when they feel distressed, and though they derive a temporary emotional relief while watching, they end up feeling worse afterwards.)

I disagree with the typical Montessori point of view on this issue. While I agree with the basic premise that children should not spend their whole lives in front of the television, I believe it is important for them to watch some. If parents can time this to maximize their own productivity, or to rejuvenate themselves, fine.

Or they could watch television with their children (though I confess that is hard to do: Even the finest shows targeted at children can only be tolerated so much; even laundry seems appealing after so many episodes of Dora the Explorer).

But the reason I feel it is important for children to watch some television is because they are a part of the world, and it helps–long term–to build a sense of community with their fellow man.

Growing up, I didn’t go out much. In fact, I spent most days watching television. I didn’t go to all the latest concerts (though I did get the t-shirts and could wear them at school the next day). I didn’t attend school dances. I had a social life that revolved around the Indian community, so I went to those dances instead. This may not have been my choice, but I made the best of it. Just as many other people have reasons, sometimes beyond their control, for not living the full high school experience. But while those events seemed so important to my upbringing–and yes, I felt like I missed out–I am still able to find common ground with other people. And part of that is having a shared point of view, which was shaped by television.

Television shows such as the Brady Bunch, Gilligan’s Island, Friends, and even Animaniacs help provide a common language to communicate with others. “This is just like that time that Rachel tried to make trifle,” I might say, and undoubtedly, some of you would know what I’m talking about. Yes, literary references are great, and I use those as well, but why restrict our kids to only being able to relate to intellectuals? People from entirely different backgrounds can find common ground thanks to television.

That said, my children rarely watch television during the week, and only occasionally on weekends, because they do manage to find other things to do. And that’s what the real goal is, right? That they not be such slaves to screen-time that they cannot exercise their own minds? I believe that the most important lesson I can teach my kids is how to never be bored. I could sit in an empty room with nothing, and I wouldn’t be bored. I may get uncomfortable, and hungry, and eventually have to use the bathroom, but I would not be bored. Because my brain never shuts up. And yes, I did manage to get this way with a childhood spent watching lots of television.

So the next time someone tries to make you question whether your child ever stops watching television, tell them you’re helping their long-term social development.

Put Your Candy Leftovers to Good Use with Candy Experiments

1 thought on “In Defense of Television”