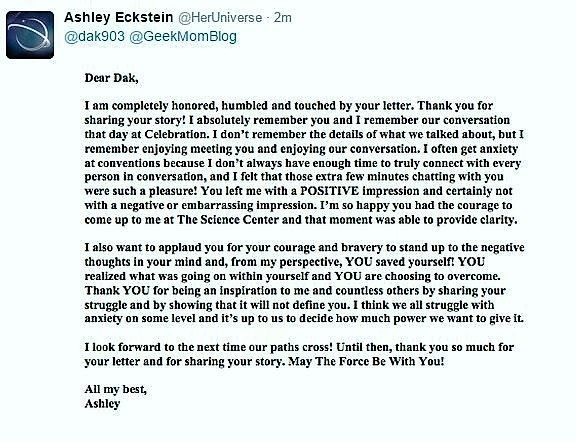 This week, I had one of those moments that as a writer I cherish. I sat down, started writing from the heart and didn’t stop until my heart said it was time. The end result was a letter to Ashley Eckstein, the voice of Ahsoka Tano on Star Wars Rebels, thanking her for her help in making me realize that things are not always as bad as anxiety makes it out to seem.

I shared the post on Twitter and Facebook hoping someone would see it and it help them learn the same lesson that I was fortunate to learn.

The day after the post went live, I was sitting at my desk at work and my phone dinged. “Her Universe favorited your tweet.” My heart skipped a beat. She had seen it.

Glancing at my phone at the notification, I saw a link and when I clicked on it, my day was made. Not only did I get a response from Ashley, but it was a response that showed she took time out to read my post and thoughtfully respond to it.

Now, for those of you not on Twitter, you are only allowed 140 characters per tweet. If you want to post more, you have to do it in multiple tweets. The other option is what Ashley did. You can take the time to type it up, screen grab it, save it as an image, and then post it in a tweet.

The few extra minutes she took to not only respond, but respond thoughtfully and whole-heartedly was more than I could have asked for.

The touching thing about her response, as my husband pointed out, was with all the people she meets in a year at conventions, Star Wars Weekends, Star Wars Celebration, and out and about, she remembered the situation. She remembered ME.

As a fan, you don’t think the people whom you admire will remember you when you leave the table and the next person steps up. This wasn’t the case. She remembered and it showed in her response.

I’ll admit, I thought I was going to have a panic attack from the acknowledgment. My husband reminded me that sometimes positive excitement can be mistaken for anxiety and I realized that I was having a rare, happy anxious moment.

Something more than just a conversation between a fan and a celebrity happened here.

By responding to my tweet, Ashley brought attention to my post which in turn brought attention to anxiety and depression. With over 21,600 followers, one of them was bound to read my post and hopefully learn something about anxiety/depression or know someone whom they can share it with and it help them.

So, while the response from Ashley was beyond amazing, knowing that someone with her influence shared a post that I wrote that might help someone else, was the highlight of the experience.

Once again Ashley, you rock. Thank you.

Kickstarter Project to Watch: The Circus and the Cyclone

Limited Edition Cross Star Wars Pens: These Are the Pens You’re Looking For