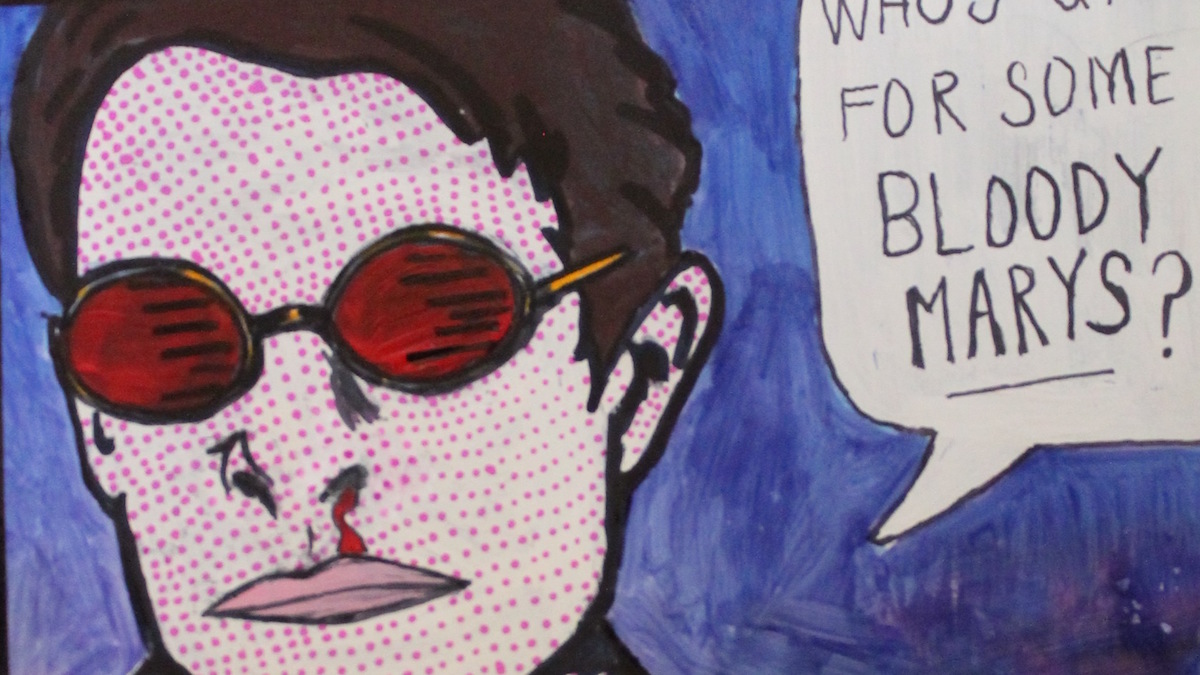 American pop art pioneer Roy Lichtenstein began drawing as a hobby, and enjoyed drawing portraits of this favorite jazz musicians playing their instruments. He enrolled in classes at Art Students League of New York his last year in high school in 1939, but it wasn’t until the 1960s, when he was a teacher at Rutgers University, that he began creating his pop art paintings that incorporated his cartoon-style images influenced by commercial printing techniques.

His portraits often featured thick outlines, bright, bold color schemes, and a pattern known as Ben-Day dots, a printing method named after printer Benjamin Day using dots to give the illusion of color. This method was common in early color comic strips and books.

Lichtenstein worked primarily in oil and an early form of acrylic paint called magna, and incorporated these painting methods to give his paintings the illusion of being a photographic reproduction.

One of his best known works, the 1963 painting Drowing Girl in which a singing woman dramatically exclaims “I don’t care! I’d rather sink than call Brad for help!”, was his take on a panel from DC Comics’ pulpy romance series Secret Love #83. Another piece, the Disney-inspired Look Mickey, was the result of his son looking at a Mickey Mouse comic and saying to his dad, “I bet you can’t paint as good as that.”

His painting Whaam!, actually a painting of the word itself in dramatic comic book letters, is considered one of pop art’s earliest examples. Many of his works were very close copies to the image that inspired them, like an ad or comic book panel, and he even worked on a series where he added his own style in reproductions of pieces by other famous artists like Vincent Van Gogh or Pablo Picasso.

Lichtenstein also worked with sculpture and screenprinting, and even in his last decade of life, he was working on new series that turned everyday images into pop art. He died in 1997 at age 73.

Despite his work being shown in galleries from Tate Modern in London to Museum of Modern Art in New York, some critics discounted the comic strip appeal of his works as trite. One Life Magazine article in 1964 posed the question as to whether Lichtenstein was the “Worst Artist in the U.S.”

Today, Lichtenstein’s legacy has risen high above any complaints from his critics, as some of his works have sold for millions of dollars. His style is now copied by many, including a recent trend of recreating his look on real-life people with make-up and face painting techniques.

Remember, some of Lichtenstein’s most popular pieces were near copies of something else, but were still his original works. (Though this ‘borrowing’ has detractors.)

We’re going to take a cue from the makeup artists who turn real-life models into pop art, but we’re not actually going to use a real face.

Instead, print out a portrait photo of a character or personality on card stock or thick drawing paper. Square images look best for this. Make sure it’s printed lightly, because you’re going to paint over it…just like a comic book inker!

First, use a dark marker, like a felt tip, and draw over the contours of the person’s face, so it starts to look like the edges of a coloring book. Do this first, because when you go back to paint over the image, you’ll  have a better guide.

Next, using lighter colors, paint over the face. Then paint the background, hair, clothes, or any larger spaces. Paint thin enough so you can still faintly see the detail below. Primary colors were used heavily by Lichtenstein: Don’t be stingy with blues, reds, and yellows.

Using brighter paint and makers, outline as much of the face as you can once more, so it starts to look like it was drawn image, rather than a photograph.

Paint (or paste on) a think bubble or quote box, and give that character something to say. It can be sad, dramatic, meaningful, or just plain funny. Lichtenstein used thin, simple letters for his words. They don’t have to be fancy.

Once you get the details you want, add the Ben-Day dots of brighter colors to the skin area of the portrait. This is the hardest part, because you want to keep the dots in fairly straight grid, not just random. This process will take some time and patience. Felt tip markers work well for it, but wait for all paint you use to dry first.

Once done, you’ve done one of the things that made Lichtenstein famous, make a near-copy of something else, but with your own touch to make a completely new work.

Lichtenstein even talked about this, in a response to his critics, in a quote found in a 1972 biography by John Coplans:

“The closer my work is to the original, the more threatening and critical the content,” he said. “However, my work is entirely transformed in that my purpose and perception are entirely different.”

25% Off Tees At WeLoveFine For Cyber Monday