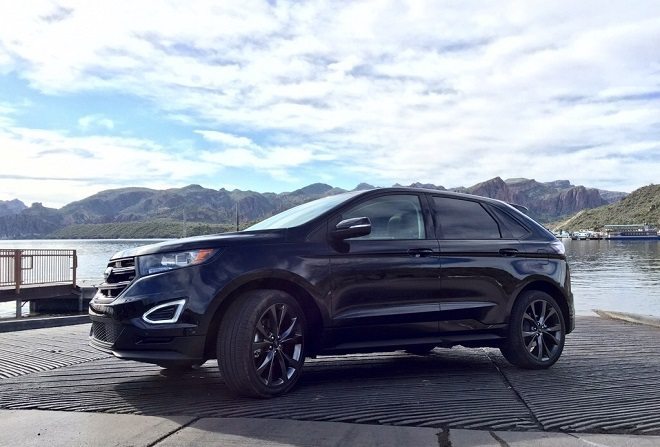 Crossovers are smaller SUVs that make it easy to carry kids and cargo, are much more affordable than full-size SUVs, and have fuel economy that won’t have you crying when gas prices rise. The Ford Edge has been leading the pack in sales, so Ford was very careful to improve things with their 2015 redesign.

It’s definitely a mom car in all the best ways. It manages to be functional and stylish so that you’ll like carting your kids to and fro and won’t mind having to make a mad dash to the grocery store because you suddenly need supplies to bake cupcakes for a party at school tomorrow.

Let’s start with the new technology in the #FordEdge, in particular the parking package. The Titanium trim level comes with an option package that will help identify a spot that is large enough for your car, and then steer you into that space. You manage the gas and brakes while the car manages steering.

As the wheel spins, a disconcerting thing if you’ve never experienced this before, messages on the infotainment screen will tell you when you need to shift from Drive to Reverse. It will do this both for parallel and perpendicular parking and if at any time you want to take control, then just put your hands on the wheel and the system disengages.

The only drawback is that the system is slow. If you’re in heavy traffic and there are cars waiting for you to park so that they can pass, then you’re going to get a few honks of the horn.

There’s also lane keep assist which will help keep you from drifting out of your lane. If the car drifts past the lines, it will let you know and it will nudge you back in the right direction. There are limits, however, as it will eventually tell you to put your hands back on the wheel. This isn’t full-on self-driving technology, but it’s getting close.

One of my favorite bits of technology wasn’t as fancy, but it was very useful. There’s a 180-degree front camera that lets you see when you’re trying to pull out. My drive was in Arizona so there wasn’t a snowbank in sight, but this feature would be so helpful when the winter snows make pulling onto the road an impossible task. It even has a washer so you can clear off mud and salt.

The inside benefits from an upgrade with materials that look and feel better than the previous generation of the Edge. I also liked that surfaces aren’t fussy, so when your kids inevitably get something icky and sticky on the seats, the seats will be easier to clean.

Soft-touch surfaces abound and there is storage everywhere you look. There are spots on the doors for holding water bottles that keep them in place so they don’t fall out when you open or close the door. There is a cubby on the top of the dash and another to the left of the steering wheel. If there was a spot that could hold something, Ford made it usable.

The rear seats fold down easily and even kids could push them back up into place. The best part about these seats is that when they fold up they do not catch the seat belt.

I cannot count the number of times I’ve managed to catch the seat belt as I’ve pushed the seats back and then had to open them up, adjust the belt, and push the seats back again. There’s a gap that lets the seat belt easily move so this just won’t happen in the Edge. It’s a small thing, but the kind of thing you’ll really appreciate when it’s freezing cold or pouring rain and you just want to get into the car.

Ford has also made the Edge a very smooth and comfortable ride no matter where you sit. The rear seats are large enough that the kids won’t be touching each other, God forbid, and front passengers won’t be bumping elbows either. The Edge evens out rougher roads nicely and the ride is quiet so you will be able to hear your kids and talk to them without that awkward half-yelling thing you do in noisy cars.

There are three engine choices starting with the all-new 2.0-liter EcoBoost twin scroll turbo 4-cylinder with 245 horsepower and 275 lb-ft of torque. This is the smallest of the engines and if you’re looking for oomph, then this is not the engine for you.

The 2.7-liter EcoBoost V6 gets 315 horsepower and 350 lb-ft of torque and is a lot more fun to drive. There’s more power here and you feel it when you accelerate, but you’ll also pay an extra $10K for the option, so drive them both to see what you think before you make the call.

The last choice is a naturally aspirated 3.5-liter V6 with 280 horsepower and 250 lb-ft of torque that has flex-fuel capability. They all get a 6-speed automatic transmission and can tow up to 3500 pounds for when the weekends come and it’s time for a getaway. Trucks are great, but they’re far from your only option for hauling stuff behind a vehicle.

The Ford Edge has received myriad updates for 2015 that not only keep it from falling behind in this competitive segment, but help keep it leading the way. Pricing starts at $28K making it easy to get into this comfortable, attractive, and functional crossover.

Ford covered my expenses to attend this drive event.

It’s Okay to Not Be Excited About the New ‘Ghostbusters.’ Really.