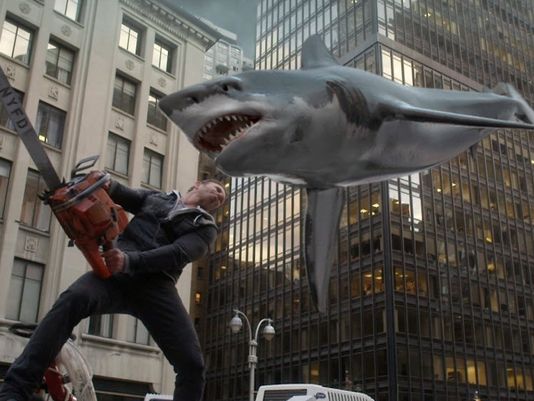 Sharknado 2 was an epic television event that will be remembered for years to come. Sharknado 2 was the worst movie to be made in 2014. I have heard both of these statements in the past few months, but in my opinion, the year of the “bad” TV movie certainly saw a great moment in the continuing story of Fin Shepard and April Wexler. Not everyone shares my enthusiasm for movies like Sharknado and Croctopus, I know, but Anne Wheaton does and so I know I am in good company.

The movie picks up with Fin and April on their way to the Big Apple to see family. April is on a book tour for her bestselling book How to Survive a Sharknado. I love how apropos that plot device is for the current era of reality tv and Zombie escapades. Of course a storm is brewing, and of course there are an unnatural amount of sharks in the area. There is nothing surprising about the progression of the plot in this movie, but it’s predictability does nothing to diminish it’s awesomeness.

I tried to keep a running death tally but lost track pretty quickly. Kelly Osborne is the first to go, followed by the co-pilot, then a nasty woman on the toilet, Wil Wheaton is next (only Wil Wheaton is credited though his wife sits beside him, what’s with that SyFy?), and Tara Reid loses her hand but not her life. Incidentally this will lead to not only a great Bruce Campbell moment later in the movie, but a pivotal moment for our young heroes.

This movie is highly entertaining, but is taken to new heights by the cameos. Some of the best one liners come from these throwaway parts. Robert Hayes commenting “This is nothing, I’ve flown worse.” Judd Hirsch driving a taxi. Richard Kind playing a reminiscent ex-baseball player at Citi Field, who finally gets to hit one, and by one I mean a shark, out of the park. Judah Friedlander was originally a one line role, but grew into one of the main characters. Billy ray Cyrus, Andy Dick, Jared from the Subway commercials, the movie is littered with amusing cameos.

Of my two favorite moments in the movie, however, only one is cameo related. Kelly Ripa killing a shark with her exceptionally high heel, now that’s style. Yet I would have to say that the best moment is when Ian Ziering plays Frogger across the water and literally jumps the shark. He jumped the shark, people. He actually jumped the shark, and they actually make the frogger reference in the movie. This is classic cinema history in the making.

The DVD is full of gems, almost as delightful as the movie itself. To begin with, you simply have to watch the trailers at the beginning of the disc. While there are some dime a dozen movies such as The CoEd and the Zombie Stoner and Bachelor Night, there are also some must see movies, and no I do not say that tongue in cheek:

Previews aside, the remaining extras on the DVD are pretty good for such a low budget flick. There is a ten minute documentary about the cameos in which the director chats about the process. When talking about casting the airplane scenes, they had wondered out loud if they could get the actual guy from Airplane, and they did indeed get Robert Hays. There were hints of a Sharknado Musical, but even I’m not sure about that! The gag reel is a little over five minutes long but there aren’t really many gags. “Sharkchum: From the cutting room floor,” contains more gags in its eight minutes and you get to see the Canadian edit which features Toronto mayor Rob Ford getting impaled with a shark. There are some great extended bits with Al Roker and Matt Laeur, and I have to say I simply love the running gag about Matt Lauer not wanting to use the gauche term “Sharknado.” “The Making of Sharknado 2” contains ten minutes of chatter about the origins of the movie, and some more information about the cameos. Some worthy extras, and a decent commentary from Ian Ziering and Tara Reid make this a pretty good deal for a movie that in any other world would have been straight to DVD.

GeekMom was provided with a copy for review purposes.

Transformers: Age of Extinction Toys “Roll Out” To A Store Near You