On this #FollowFriday I am forced to ponder what Twitter accounts are appropriate for kids to read and follow.

Kids: They are too smart for their own good. Who am I to squelch curiosity and learning avenues, though? My daughter is always reading my Twitter and Pinterest feeds over my shoulder in the morning. She comments on most things that have to do with science, comics, or art—which is most of my feeds.

The problem is, not everything in my feeds are kid appropriate. Gasp.

My daughter will be getting a tablet for her birthday in a little over a month. In figuring out what she would be using the tablet for, my husband and I started wondering if she would enjoy and be safe with her own Twitter and Pinterest accounts. I went ahead and signed her up. There are so many great kid resources out there that aren’t necessarily just for kids. If your kiddos are anything like mine, my daughter is really good about ignoring the occasional potty language and is looking for fun things to do or learn. She is also a strong reader, which makes me want to share these things with her more. I feel fairly safe in giving her a personalized account. We will have rules (which she has been awesome about following since she got her own netbook almost three years ago). It also doesn’t hurt that there are many articles out there focused on the topic of kids internet safety, even specifically articles about kids using Twitter.

But who should she follow? She isn’t interested in Sesame Street anymore (though the Twitter feed is entertaining), but she does like PBS Kids on weekends. She loves science, music, math, art, museums, and comics, which is what I focused on. There are also some other suggestions peppered in from the other GeekMoms.

I started searching for streams that met several criteria:

After going through several hundred feeds I came up with a good list based on my daughter’s interests:

NASA tweets pictures and tidbits about the universe.

Chris Hadfield always seems to have an inventive YouTube video to share when he’s on a mission. Wringing out washcloths was one of my favorites.

NASA_Astronauts tweets from various NASA astronauts. This can be a little dry, but still interesting.

MinuteEarth is facts about Earth in short tweets and quick animated videos.

Emily Graslie is probably best known for her work on the Sci Show Talk Show with Hank Green on YouTube. She is now in Chicago focusing on baking, art, animals, and her YouTube show, The Brain Scoop.

Dr. Kiki Sanford, or Kirsten Sanford, is into neurophysiology and getting out of the lab.

Vi Hart is a math genius. I have learned more from her YouTube channel videos about math than I did in middle school and high school combined. Her videos and tweets are interesting, fun, and sometimes involve experiments on food.

Numberphile is another Twitter user who knows how to make math fun.

Peter Hollens has an amazing voice. He does vocal scores of geeky instrumental music pieces and other bits. He also just seems to be a pretty nice guy.

Lindsey Stirling is a geeky violin player. She is known for doing her own instrumental covers to video game music and geeky movie songs.

Kathy Barbro posts links and pictures to art projects for kids. She teaches art to a variety of ages and posts to all age groups as well.

Create Magazine has tweets about up-cycling leftover things from in your house, kids with food allergies, art projects, and so much more. 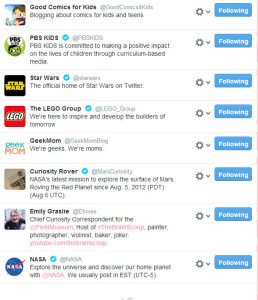 GeekMom Blog: These moms with super powers write articles about their geeky passions and share them on a website. They also delve into the social media and chat with readers.

Pottermore tweets about tiny tidbits in the Harry Potter universe and updates to the Pottermore website.

JK_Rowling, who is the author of the Harry Potter books. What other reason do you need to follow her?

Origami Yoda is a Twitter account for Origami Yoda author Tom Angleberger. He has the same sense of humor that he does in his books.

Sandy Boynton is one of those rare individuals who can entertain all age groups at the same time. If your toddlers were fans of her books Moo Baa La, La, La or Barnyard Dance, her twitter feed is equally entertaining.

Meg Cabot is the author of the Princess Diaries, a geek, and into girl empowerment.

Judy Blume, author of many books, mainly has conversations with her fans and shares moments from her life.

Camp Halfblood is the Twitter account of Rick Riordan, author of the Percy Jackson books. His tweets are entertaining and sometimes in Spanish.

Penguin Kids is a publishing house that shares tweets about books for kids.

Scholastic Books has various feeds for parents and kids.

Lego Group has a bunch of links to Lego brick related articles and products.

My Little Pony is an unofficial Twitter feed for the famous ponies, but has many interesting and fun pictures and comments about recent episodes.

Cheecker the Chipmunk tweets for the U.S. Forrest Service. Yes, it is as cute as it sounds.

Kids.gov tweets about science projects, activities for kids, and tips for everyone who works with (or is) a kid.

Sesame Street: Even if your kids (or you!) are too old for it, it is still a fantastic and entertaining feed to follow.

Yoda tweets in Yoda speak, he does.

Family Fun tweets about activities and games for families.

Marvel tweets about comics, movies, and various art from the Marvel universe. Some art is a tad gory, but not horrible. Use discretion.

Hasbro Game Night encourages families to play more games together and gives ideas and recommendations for games to play.

There are a lot of monuments and museums that also have Twitter feeds. There are so many across the country though, I stuck to some local ones like Western Antique Aeroplane & Automobile Museum, The Evergreen Museum, The Oregon Zoo, The Museum of Glass, and The Seattle Art Museum.

As you can tell from the images, there are even more accounts I let my daughter follow that aren’t in this list. If your children are on Twitter, what feeds do they enjoy? Share in the comments below.

Poetry Doesn’t Have to Be Scary… And Here’s Why

Self, Not Cooler Self