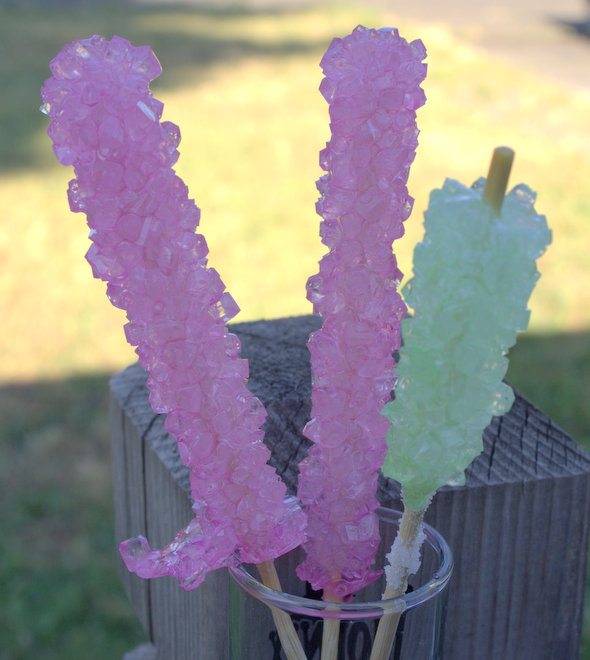 Over the past month we have been experimenting with making rock candy. In true scientific fashion, we have done the experiment multiple times changing variables to see how the outcome changes.

In our first attempt, we followed a recipe we found on Pinterest. We followed the recipe. I can say we followed it exactly even with a 3-year-old and 7-year-old helping. When we put the sticks into the solution, the sugar immediately fell off the sticks and floated to the bottom of the jars. After waiting ten days, the end result yielded little besides a crust of crystals on the top and bottom of the solution. Even though we had no candy to speak of, we embraced the failure and talked about stalactites and stalagmites.

For attempt number two we used the leftover solution from the first attempt. I boiled each flavor individually to dissolve all of the crystals that had formed on the bottom of the containers. I let the sticks dry for an hour. I discovered when I was done reheating the solutions that I was a stick short, so I let one dry overnight. It produced the most candy of the sticks. Most of the sticks had the same result as the first attempt: The sugar didn’t stick and fell to the bottom of the jar. The one that dried overnight did not lose its sugar and produced a nice candy. After seeing the result on the stick that had sat over night, we decided to try reusing the solution one last time.

On the third and final crystal experiment I let the solution come to a full boil for five minutes before removing it from the heat. The sticks all dried overnight. The result was several candy suckers! We had more than pictured, but I put the sticks so close to the bottom, the crystals joined with the stalagmites and popped right off the sticks when we tried to pull them out.

The kids had a blast making these. We learned a great deal about crystals. Here are some things we talked about:

We also learned that sometimes it is okay to fail so we learn more about what it is we are trying to accomplish. Plus, each time we attempted this experiment, we got to eat the results.

2 thoughts on “Rock Candy: Failed Recipe or Lesson in Science?”