This time, we’re going to talk about the Soda Stream. How many of you have one of these nifty contraptions? Go ahead, raise your hand!

Our family got a very basic Soda Stream model at Christmastime, which included the carbonator with CO2 tank, one 1L bottle, and a sampler pack of flavor syrups. The system is very straightforward, and doesn’t even require electricity: Screw a water-filled bottle to the carbonator and depress a button on top to carbonate to the level you desire.

We tasted several of the sample syrups that came with the system and they’re pretty good. My husband noticed that all the syrups were surprisingly low-calorie and upon further investigation, we noticed that they all had sucralose (otherwise known as Splenda). The other flavors are more natural than the colas you would buy at the grocery store: sweetened with cane sugar, instead of high fructose corn syrup.

Everything having that sucralose in it doesn’t sit well with me. It’s as if Soda Stream has some sort of drug deal with the company that makes/markets Splenda. I can’t stand the taste of it, and my kids don’t need it. Dave likes some products that have it; he claims he doesn’t taste the same metallic flavor that I do.

I turned to Pinterest for homemade Soda Stream syrup ideas. I even set up a board. I had no problem finding classic recipes for ginger ale, cherry limeade, and root beer. I’m looking forward to trying the strawberry soda when I have fresh-picked berries!

I also found an idea for using unflavored Kool Aid packets with simple syrup to make mixes for orange and grape soda. Here is the pin, but the link is just to the picture of three bottles. The text has the quick and dirty instructions. I found the pin in reference to using the syrup for shaved ice, so I did some experimenting with the help of other shave ice syrup recipes, then adapted the recipe for Soda Stream.

I use a one-quart Ziploc screw top soup container for storage.

In a small saucepan, dissolve the sugar into the water. Remove from heat and slowly add the Kool Aid mix and allow to cool before transferring to a storage container. I was able to make about 16 oz. of syrup.

I had to do some experimenting before I came up with an amount to add to the soda. I recommend 3 oz. for a half liter bottle of soda and 6 oz. for a full liter.

Don’t make a fizzy sugary mess! Add the syrup very slowly, and tilt the soda bottle before adding the syrup. You’re adding quite a bit of syrup, such that your soda may come very close to the top edge.

Do you have a Soda Stream? Do you have any homemade recipes? Feel free to share them in the comments!

How To Learn From Experts

A Last-Minute Spider-Gwen Cake for the Decorating Deficient 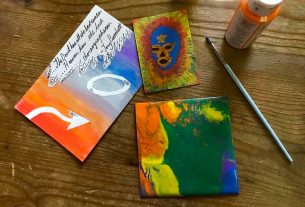