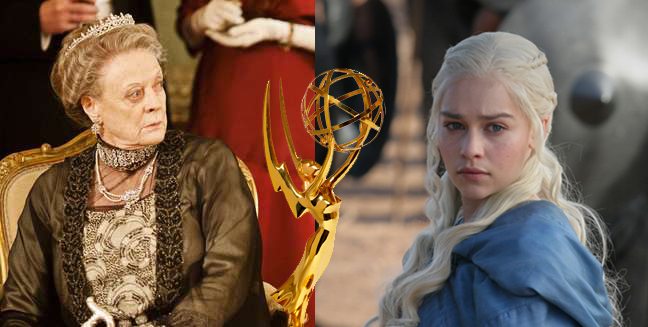 Today’s the big day! It’s Emmy nomination day. Emmy brought with her much good news for TV-loving geeks. Let’s have a look at some of the interesting categories.

Among the GeekMoms, there are avid fans of all of those shows. Of them all, I think Game of Thrones had the best season. I came late to the GoT party, but I’ll be wrecked about that Red Wedding for a while. I’m secretly hoping for House of Cards to win, though. Netflix has really stuck its neck out to change the landscape of television and deserves to be rewarded for it. Hopefully, it means more quality shows headed our way.

My money’s also on Kevin Spacey to win for House of Cards, though there were points in the series where his character Francis Underwood sank so low I almost stopped watching. Game of Thrones was woefully not represented in the Lead Actor in a Drama category, unfortunately. Nikolaj Coster-Waldau had a great season as Jaime Lannister.

30 Rock is a favorite here, celebrating one of my favorite geeky women, Liz Lemon. It’s hard not to love some of those other choices, too (Louie!), though I’m the lonely geek that doesn’t love The Big Bang Theory. What’s sorely missing on this list, though is Parks and Recreation, with my favorite geek couple on television, Leslie Knope and Ben Wyatt. Did you see the episode where Ben’s eBay username was Tyrion Lannister as he tried to by Leslie a waffle iron? Adorable. Better yet, see how Amy Poehler would recast Game of Thrones with Parks and Recreation characters. I’ll take comfort in the fact that Amy Poehler is nominated for Lead Actress in a Comedy Series.

Emmy also snubbed Nick Offerman. His Ron Swanson is one of the best characters on television. Speaking of best characters (and Tyrion Lannister), I’m rooting for Peter Dinklage to win Supporting Actor in a Drama Series. (Sorry, Mr. Carson.)

The category I’m most looking forward to, though, is this:

That’s right, people, the Dowager Countess is up against the Mother of Dragons.

What could be better? Of course, I love all of those other women, too, though Christina Hendricks was woefully underused last season. (You hear me, Matthew Weiner? Need. More. Joan.)

You can see all of the Emmy nominations on the Emmy website, and wait with me until September 22 when we’ll find out who wins.

Who are you rooting for?

Greeking Out With Mythology Books for Percy Jackson: Sea of Monsters