There are a lot of deals to sift through today–who has the time? So we’ve done a little sorting for you to make your Cyber Monday shopping go a little more smoothly. Find another great deal? Leave it for everyone in the comments!

is only $129 today, the lowest it’s been. Use code FIREDEAL at checkout. If you’re looking for more, they have quite a few tablet deals

Nabi, the Android tablet for kids, is the kids.woot special today, which means it also probably won’t be there long. Regularly $199, you can score it today for $129.

SparkFun is offering free shipping today. Pick up a new kit and get tinkering on your holiday lights display!

Everything at Mimoco is 30% off with code CYBERBLOOH30, including their new line of Star Trek flash drives.

Comixology is have a 99 cent sale on Avengers, 50% of select comics from IDW, and up to 80% off collections.

include The Walking Dead: The Road to Woodbury and The Complete Vader: Star Wars. Check to see when the books you want will be available so you know when to buy. Kindle books are on sale

All books from tech publisher Apress are $15 today.

O’Reilly is offering 50% off all of their ebooks and videos or 60% off orders more than $100 with code CYBERDAY. O’Reilly digital content is DRM-free with free updates in multiple formats.

Adafruit is offering 50% off the early release version of Getting Started With Raspberry Pi.

If there’s a maker, hacker, or tinkerer on your gift list, the recently released Makers: The New Industrial Revolution

by former Wired magazine editor Chris Anderson is $13.98 on Amazon.

Wal-Mart has some good deals on Lego sets, among other things. Encourage imagination instead of instructions-following with 1300-piece basic brick boxes for $30, which comes out well below the average price per brick!

Toys R Us often runs “buy one, get one 50% off” specials, but several action figures and toys, including Green Lantern and Pirates of the Caribbean, are just plain 50% off or more today.

V-Tech is running discounts on bundles of its new InnoTab 2, MobiGo 2, and V.reader devices with free shipping.

Get the PC download version of Batman Arkham City

for only $7.50 or Batman Arkham Asylum

If you’re ready to start your kids on Skylanders, Wal-Mart has glow-in-the-dark starter packs for $39 for Wii, PS3, and Xbox. If you missed all the Xbox specials on Black Friday, they also have a bundle for $159 with Skylanders Starter Kit and Exclusive Gill Grunt Character and free shipping.

The Steam sale is still on, but harder to gift, so consider it a present to yourself. Today’s deals includ Sonic Generations and Batman: Arkham City. Yesterday’s still available deals include Borderlands 2 and Deus Ex: Human Revolution.

Seasons 1, 2, and 4 of Heroes on Amazon are only $8.99 each. (Season 3 is inexplicably twice as much.) The search turns up a lot, though, so to make it easy, just use these links: season one

throughout the day, but like with the books, you’ll have to check to see what’s available and make sure you’re ready to click when they’re ready to sell. The best deals go within seconds. Today’s deals include Battlestar Galactica, Harry Potter, The Chronicles of Narnia, and Brave.

ThinkGeek is offering free shipping with no minimum order in the US or $10 off $60 anywhere outside the US (including Middle Earth, according to their newsletter).

X-Treme Geek is having a 70% off sale with 99-cent shipping.

SnorgTees has free shipping over $60 today only.

Toys R Us packs of batteries are buy one, get one free. You’ll no doubt need them for all of the other stuff you’ve bought! 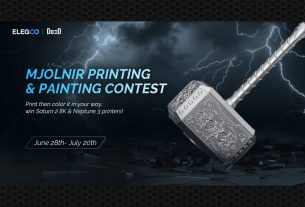 GeekDad: Bring the Love and Thunder to the ELEGOO Mjolnir Printing & Painting Contest