If you’ve started to hear buzz building about a game called Skylanders Spyro’s Adventure, it’s with good reason. Activision has come out with an innovative hybrid of toys and gaming that’s sure to delight a wide range of players.

Before it launched, I saw Skylanders Spyro’s Adventure

in various stages of development at events like Toy Fair and Time to Play and was captivated by the concept. The video game comes packaged with a portal and three figurines. When you put a figurine on the portal – WHOOSH! – the digital version of the character appears in the game. But that’s not even the coolest part. All of the game data for that character is stored in the character itself, so if you take your figurine over to a friend’s house – WHOOSH! – your character is now playing in your friend’s game. When I realized I had a sample Gil Grunt figurine from Toy Fair and we had the Gil Grunt that came with the game, we tried playing with both at the same time, and we could! One had previously leveled up and we’d earned a pan hat, so we could even tell them apart on screen.

The big lingering question in my mind was if the game itself would be fun. Without great gameplay, all the cool tech would be for nothing. Fortunately, Skylanders doesn’t disappoint. Anyone remember Jak and Daxter? I used to spend ages playing that game. Skylanders reminds me of that variety of fantasy adventure, with lush environments and great character design. The story, written by Alec Sokolow and Joel Cohen of Toy Story fame, is classic. An evil villain, Kaos, has banished the Skylanders heroes to Earth where they are frozen in the plastic form you have in front of you. With the Skylanders out of the way, he has wreaked all sorts of destruction on the Skylands. Fortunately, with the Portal of Power, you can send the Skylanders back to save the day.

You can play Skylanders in single player mode, but it’s a fabulous co-op game. While it’s being sold as a game for kids to play at each other’s houses, it’s also a great game for parents and kids to play together. It’s perfect for me to play with my daughter, a 6-year-old emerging gamer. She has a little trouble with the controls, especially navigating using the nunchuk joystick, but she’s getting better. The villains aren’t terribly difficult to defeat, and I can go ahead of her with weapons blazing while she hangs back to collect treasure.

Here’s the thing, though. Once you start enjoying Skylanders, you can go ahead and give Activision direct access to your bank account because you will want more of the toys

. Certainly you’re going to need characters to cover all of the different Skylands elements, because there are parts of the game that you can only unlock with Skylanders of the correct element. This also gives the game replay value, because you can go back and play the parts of the game that you might have missed or couldn’t unlock earlier. The real reason you’ll want them, though, is that they are your game lives. When a Skylander gets killed in the game, it needs a rest and you have to take it off the portal or restart the chapter. If you have another Skylander to put on the portal – WHOOSH! – you’re back in the game right where you left off with full health. If you had 20 Skylanders, there’s no chapter you couldn’t beat.

We saw Puss in Boots over the weekend, and the best part of the movie was the Skylanders trailer that played before it. My daughter and I were practically jumping out of our seats with how much we needed the different characters.

I’m not sure who has more fun playing the game (probably me), but we both really enjoy playing together. And, not since Plants vs. Zombies has a game inspired fan art in our house. Here’s my daughter and I playing Skylanders with a nice glass of milk. It’s important to hydrate when you’re gaming.

Note: I was provided with a review copy of the Skylanders starter pack. All future Skylanders will be coming out of my pocket and Santa’s workshop. 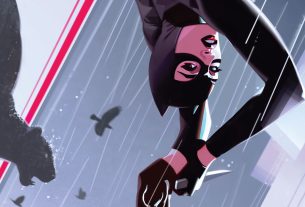 GeekDad: Review – Catwoman #39: Down and Dirty

8 thoughts on “Skylanders: Co-op Game Time With the Kids”