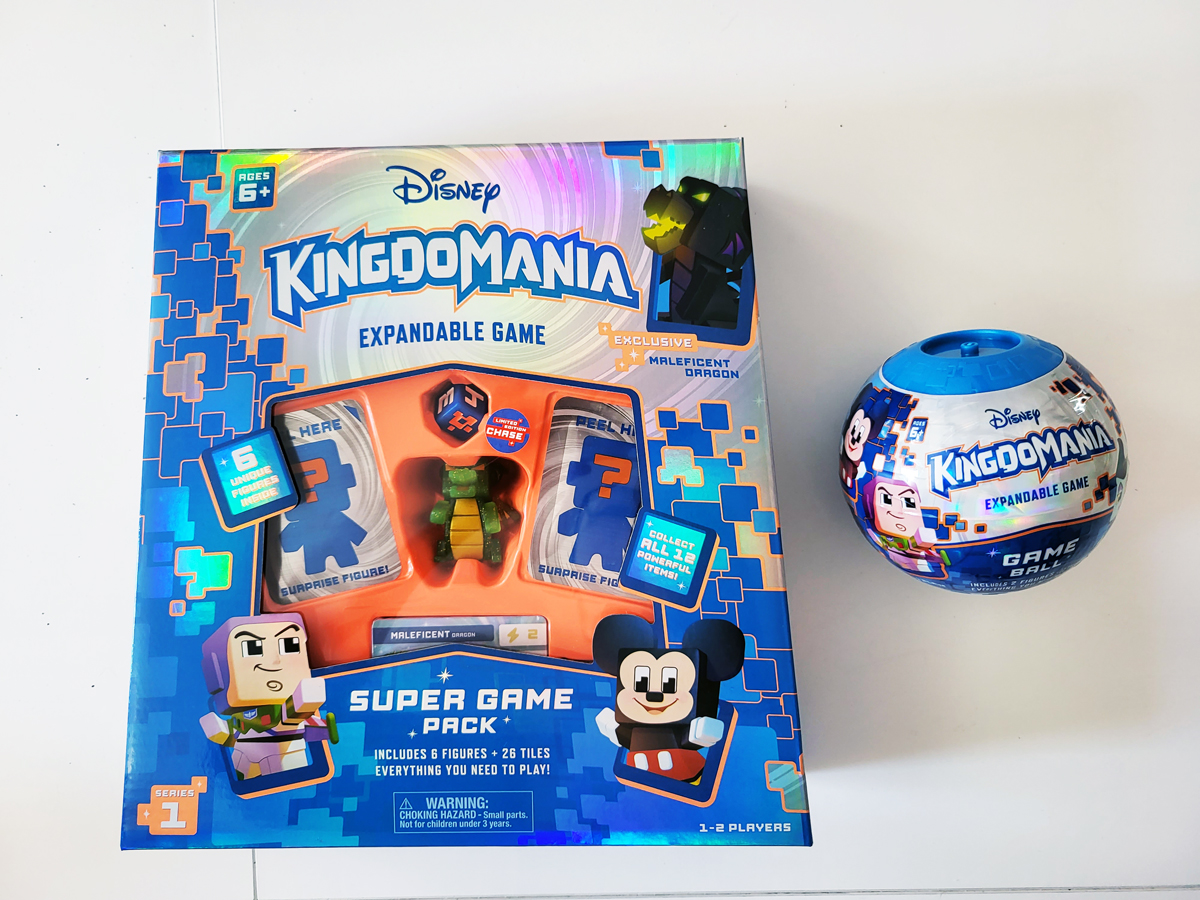 I freely admit that Funko Games drops a lot of my favorite tie-in games, so when their new releases get announced, I’m always excited to see what’s coming out next. When I first saw the announcements for their new collectible game, Kingdomania, I immediately thought of their Marvel Battleworld line, which we really like. I always felt like the Battleworld format could easily be adapted into other franchises, so I was excited to see what Kingdomania was going to like to play. Funko Games was kind enough to send us a Kingdomania Super Game Pack and a Kingdomania Game Ball for reviewing.

Kingdomania is a cooperative-style game where Disney-based heroes, villains, and iconic items are trying to patch glitches before the Nexus can be overwhelmed by them. It’s an expandable game and additional figures can be purchased blind bag style via additional Super Game Packs and Game Balls. The Game Ball is designed to have enough stuff for a single-player game, while the Super Game Pack contains enough for a two-player game. These sets can be combined to allow more players to play. The game is designed for players 6+ and takes about 15 minutes per person playing. The Game Balls have an MSRP of $10 and the Super Game Pack has an MSRP of $22.99.

Both games have fairly similar contents. There are 40 figures that can be collected, but 14 of them are exclusive to the Super Game Packs, which means if you want a good variety of characters you’ll find yourself collecting pretty quickly. This first series includes figures like Mickey, Minnie, Cruella de Vil, Lilo, Stitch, Maleficent, Aladdin, Jasmine, the Magic Carpet, and the Spinning Wheel. Overall, it’s a pretty decent mix across the different Disney eras.

Overall, it was right about what I expected when I compared this game to Battleworld. These figures are more pixelated-looking, but given that the game involves Glitches and Patches, that makes a lot of sense. They really are fun little figures and I know kids will recognize their favorite characters quickly. The cards are all about playing card thickness and should hold up fairly decently. Information on the cards is clear to read and identify, which is big for a game that involves younger kids. The tokens are thicker cardboard and easy to tell apart from each other. The die is clear and easy to read as well. The Instruction Booklet has just enough picture examples to be helpful with learning the game and includes a QR Code link to an official video that gives gameplay instructions. For the price point and the age the game is geared toward, everything is right in line with what I would expect.

The game sets up pretty fast, you just have to follow these steps:

The game is now ready to be played. Cleaning up works even faster, so it’s an easy game to get going.

The goal of Kingdomania is to push the Patches onto the Nexus before the Glitches are plugged into the Nexus.

Kingdomania does play as young as six, but I found the rules to be a touch simpler than Battleworld, so any kid who can play Battleworld should be able to play Kingdomania. Turns move pretty quickly, although it should be noted that in multiplayer games, it does not matter which player goes first in a turn as the game is cooperative by design.

On a player’s turn they do the following:

Each Character or Item has a Unique Power. Items can be used over and over but their Power only impacts the level they are on. If you are told to remove an Item, set it aside and flip its card over. If a Character Power says Action, it is used as one of the Character’s two Actions. Otherwise, it can be used at any point, even when it’s not your turn. When the Power is used, flip the Card over and the Power cannot be used until the Character recharges on the Nexus.

Each Level Tile and Character Tile has a set of symbols and numbers. Look at the symbol on the Tile and your number that matches that symbol, if there are multiple symbols, use the one where you have the highest number. Now, roll the Die and add your number to the result. If the number matches or beats the matching symbol number on the Tile Card, you win. A Sparkle always wins, but a Glitch always loses and causes the Glitches to move. When you roll a Glitch here, move the Glitches on your level and one on each of the other Levels.

The game ends when either all of the Patches are on the Nexus giving a Player victory or all of the Glitches are plugged in and the Players lose.

Who You Should Play Kingdomania

I feel like I have to start off by saying if you’ve played and enjoyed Battleworld and/or love Disney movies, this is a great game for kids and families. Honestly, I think the adult Disney fans I know would get a real kick out of playing this too, as well as really enjoy seeing what new Figures they get.

Overall, it’s a fun cooperative game, and the fact that a single player can play means no one is dependent on needing to find someone who loves Disney enough to play with them. While there is no official top limit on how many players you can add, since each player adds around 15 minutes to the game, I would not recommend going over 4 players or an hour of play, especially as some younger kids might not want to focus for that long. Because this is a cooperative game, it is easier to let younger players in on the fun. I do believe a group of six-year-olds could play the game on their own, but a slightly younger kid might be up for playing along by rolling dice and helping move the Figures for the family and still feel like they are contributing.

The game is well made, well thought out, and quick to learn, set up, and play. There is a certain strategy element to it as we discovered by lining Characters up in connecting Tiles and sort of using our turns to bump a Patch across several Tiles in rapid succession. It’s not an overwhelming amount of strategy though, so casual gamers and kids starting to learn strategy games should be able to play without being overwhelmed.

The price point makes this a very accessible game for gifting especially as the holiday season approaches. I can even see some families grabbing a Game Ball for each family member so family members can play together in different combinations.  The Kingdomino Super Game Pack can be bought via Funko Games or affiliated retailers here, while the Kingdomino Game Ball can be purchased here.

Top 10 Reasons to Visit SeaWorld During the Holidays 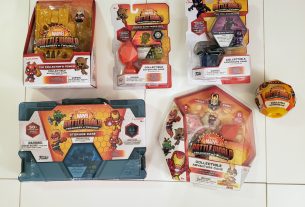