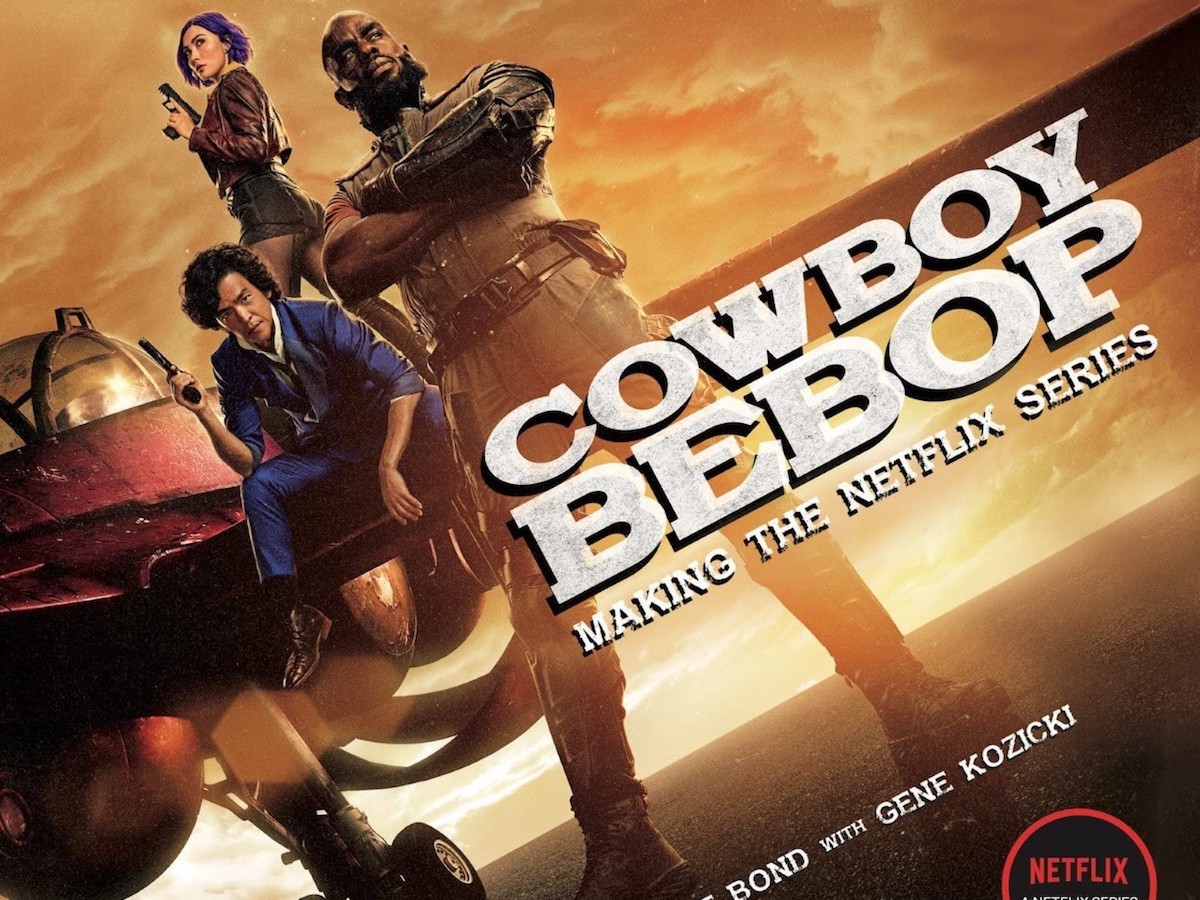 I love taking a look at “the art of” and “the making of” books, particularly for games, series, or shows I love, but if I am going to give an honest review, I need to come clean on something upfront. I did not particularly enjoy the live-action adaptation of Cowboy Bebop.

Maybe it was because I was already so invested in the fantastic, groundbreaking anime series that nothing could top it. Maybe it was because they took the basic look of the characters and gave them personalities and backstories that significantly strayed from the original characters. I mean, the casting was fine, but the backstories were off base. That’s just my opinion as a lover of the original series.

There were a couple of elements I did like, however, including the loyalty to the opening credits and theme song by the wonderfully talented Yoko Kano. The other was the beautiful, stylized backgrounds and the attention to the cartoonish, gritty detail of a not-so-perfect space-western-noir environment.

The care taken to create this immersive environment is why I was anxious to see the Cowboy Bebop: Making the Netflix Series by Jeff Bond and Gene Kozicki.

True to its title, the 175-page hardback from Titan Books does give emphasis more on the “making of” process rather than the initial concept art, although there are plenty of beautiful full-color images of both hand-drawn and digital works created in the process. The majority of images are photos from the series itself, and the book does an excellent job covering most of the angles from costumes to sets.

The best part of the book is the “Tour of the Solar System” chapter with a colorful and appealing breakdown of each of the worlds and key locations visited throughout the series. These included the Astral Gate and several of the Mars locations. The bird’s-eye look at some of these mixed with the street views, particularly the grimy, realism of New Tijuana, was a detail-filled highlight. I had fun “touring” the worlds through these images and the accompanying text. This section also contains what I felt was the most beautiful location (and also the most faithful to the original series next to the Big Shot set), the Cathedral. The images of the windows alone were gorgeous.

Another place you can enjoy some of the attention to detail of the set and worldbuilding is several nice examples of graphics for the ads and close parodies of logos to real brands. My only issue with the images is this would have been a great place for a fold-out page or a multiple-page spread. The detail on these would look so much better on a larger scale.

It was obvious, however, that what the authors most loved were the ships, particularly the beautiful and well-deserved attention paid to Spike’s ride the Swordfish, as well as Red Tail, ISSP ships, and, of course, the Bebop. The section features several angled diagram-style images, interior concept art and photos, and plenty of exterior images.

There are some that are distinctly missing from this volume that would have really made it shine. There are no images from the original anime series, by Hajime Yatate, that could have served to help show the evolution of the show from inspiration to finished product. I realize there may have been some copyright or space issues for this, but an omission of any image from the anime is too hard to ignore. Also, although there were some great images of the worlds (including “satellite” views), I would love to have seen a couple of maps to add to the mix.

Finally, I would have loved to see a section on the use of music in the series. Kano is an amazing composer, and her contributions to the feel of both the anime and the live-action show were one of the greatest links between the two. Some side-by-side storyboard images from the iconic opening title would have looked wonderful in this book.

There is plenty of commentary from both the cast and filmmakers talking about the impact the anime had on the process, as well as how it translated into live action, which did help pay homage to the original source material. That was a much-appreciated addition.

It seems like if the show had been renewed for a second season, more would have been added to this, but as it stands it is a nice capsule of the makings of this show.

It’s unfortunate that this well-made book was released long after the live-action series was canned, but at least now the best part of the series can be preserved and enjoyed by those who appreciate both concept art and the filmmaking process.

Regardless of what you thought of the show’s loyalty to the anime, or whether you have seen the original inspiration for the series, this is a well-done, visually appealing recap of its best elements.

Lisa received a copy of this book for review purposes. Retail price for Cowboy Bepop: The Making of the Netflix Series is $39.99.