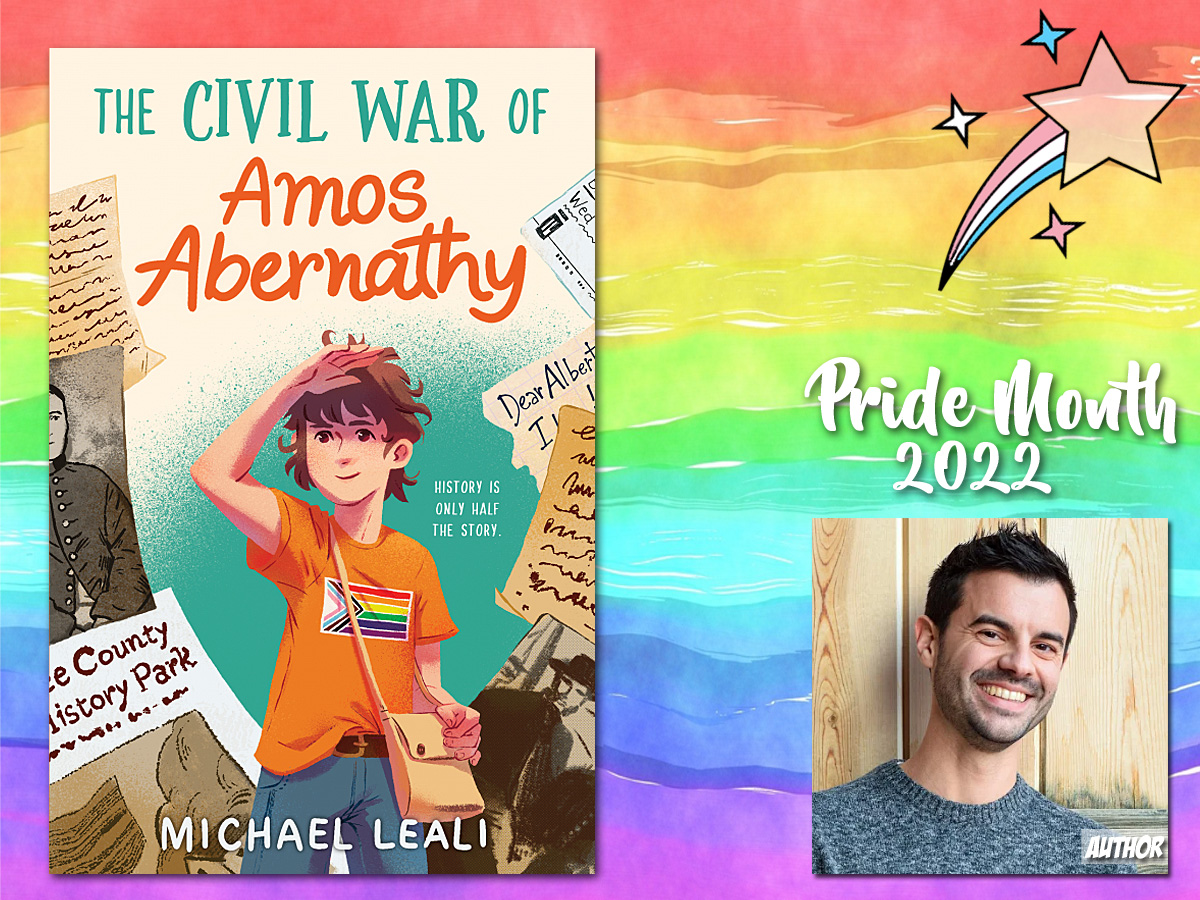 Throughout June, GeekMom celebrates Pride Month with lots of LGBTQ content. Follow the Pride Month tag to find all the content in one space (including LGBTQ content from previous years) and keep checking back for more throughout the month. Today’s book review is The Civil War of Amos Abernathy by Michael Leali.

In The Civil War of Amos Abernathy, thirteen-year-old Amos Abernathy is a history nerd who loves everything to do with 19th century America and spends his free time volunteering at the local Living History Park his mom manages with his best friend Chloe. He also happens to be gay. In the summer of 2021, Amos found himself falling for Ben Oglevie, another young volunteer at the park, but Ben’s family attend Holy Cross Church, the other church in Amos’ small Illinois town and one with a much more conservative reputation than the church Amos attends. When the Living History Park invited proposals from the community for a new exhibit, Amos, Chloe, and a nervous Ben began putting together a project about LGBTQ history in Illinois, prompting Amos to learn about Albert D. J. Cashier – a Union soldier who might have identified as a trans man had he lived 150 years later.

One year later, Amos and Ben are estranged and the Living History Park is still ignoring the stories of marginalized people. Amos and Chloe, with some help from their friends and a teacher from their school, are planning something big on the day of the annual Civil War reenactment, but is their town ready to accept a change to their history books, and just what is going on with Ben?

The Civil War of Amos Abernathy was a fantastic middle-grade book that explored an area of LGBTQ history I had never considered before. Many history books only seem to begin discussing queer people from the 1950s and 60s on, as if they didn’t exist prior to WWII, but seeing yourself accurately represented in a place’s history is vital in making you feel as if you truly belong, and it’s this task that Amos takes on.

The story is told in a very unusual and completely unique way with alternating chapters. The even-numbered chapters all take place on a single day: August 13th, 2022 – the day of the big Civil War reenactment. These chapters are told in the first person and progress slowly through the day, but we know that something big is going to happen that afternoon and that Amos is trying to keep it a secret from his mom. The odd-numbered chapters are all letters that Amos writes in his notebook, addressed to Albert D. J. Cashier – his new historical hero. These letters are written between August 2021 and August 2022 and in them, Amos recounts the events of the previous year to Albert in much the same style as diary entries. It’s here that we witness his developing relationship with Ben, knowing it has broken down by the following summer, and learn about the exhibition project. As the book progresses, the letter chapters are dated closer and closer to the reenactment day, and eventually, the two timelines merge.

I loved The Civil War of Amos Abernathy and it got me thinking about not only local LGBTQ history but my own family history too. I’ve spent over a decade researching my family tree and have over 600 names in it – I wonder how many of them would today have identified as queer? I also appreciated that the book touched on other areas of marginalization. Amos’ best friend Chloe is a Black girl and faces her own challenges at the Living History Park both in terms of her race and her gender. As he has his eyes opened to the historical erasure of queer people like him, Amos is horrified to realize that he didn’t even notice the erasure of other people’s stories, like those of Chloe’s ancestors. The point is also made that being part of a marginalized group yourself doesn’t immediately make you an ally of all others. It is entirely possible to be both queer and racist.

Naturally, given that this is a middle-grade book, things end quite happily, but I was pleased to see that the ending didn’t involve an unrealistic kumbaya moment where the whole town realizes the error of their ways and paints Main Street with rainbows. Some people will always remain bigots, but sharing the truth with those who have never heard it spoken will also win over others and that’s just what Amos does. I would highly recommend The Civil War of Amos Abernathy to all middle-grade readers, especially those questioning their identities, their place in history, or those looking to find the strength to stand up and speak out for themselves and others.