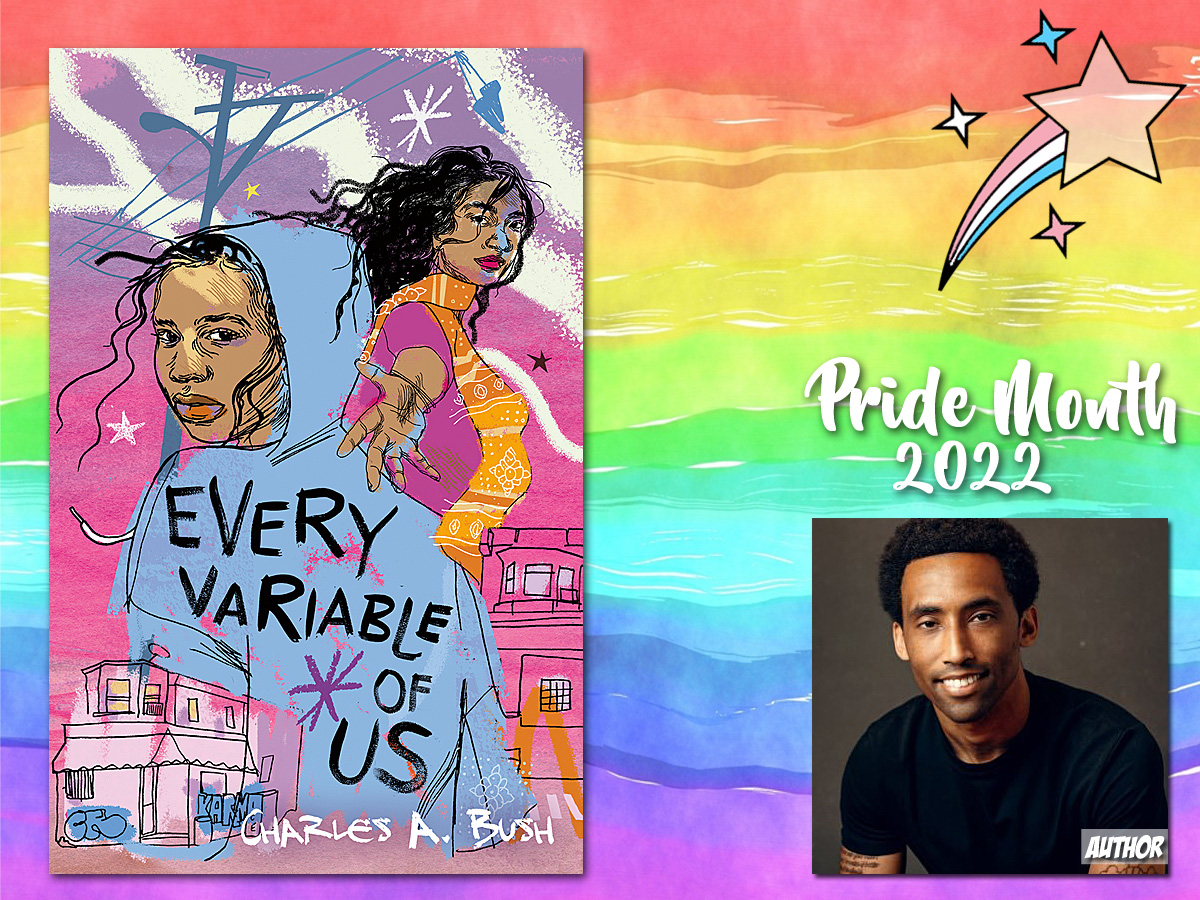 Throughout June, GeekMom celebrates Pride Month with lots of LGBTQ content. Follow the Pride Month tag to find all the content in one space (including LGBTQ content from previous years) and keep checking back for more throughout the month. Today’s book review is Every Variable of Us by Charles A. Bush.

In Every Variable of Us, Alexis Duncan is a high school senior living in a poverty-stricken neighborhood on the outskirts of Philadelphia. Watching her classmates turn to the local gangs one by one and wrap their lives up in drug dealing, Alexis believes she has only one chance of getting herself out—a basketball scholarship. So when she is seriously injured in a gang shooting and told she will never play again, Alexis sees her future instantly wither before her eyes.

Enter Aamani Chakrabarti. Aamani is the new girl in Alexis’ senior class and a member of the school’s competitive STEM team—something Alexis never even knew existed. Aamani believes that Alexis is much smarter than she ever gave herself credit for, and pushes her new friend to take up the final space on the team, allowing them to compete and hopefully win themselves academic scholarships. Alexis awkwardly ingratiates herself with the school nerds and soon finds a passion for astronomy, but as her mother’s addictions spiral and her best friend finds herself in too deep with a local kingpin, will she be dragged back into the worst elements of the neighborhood she longs to escape?

I’m going to start out this review by noting that as a white woman who lives in the English countryside, Alexis and Aamani’s lives are completely alien to me. The neighborhood they live in is the worst type of “hood” stereotype and this is something the author has acknowledged, stating that the fictional location of Hargrove is “a sometimes-exaggerated amalgamation” of the places he and his friends grew up and pointing out that not every block in the real world deals with those same problems. However, everything Alexis and Aamani go through is going on right now somewhere and the experiences of the kids living those lives need to be acknowledged, as does the systemic racism responsible for most of their hardships.

Alexis has grown up believing that her only “escape route” out of Hargrove is through excelling at sport—the same message the author received growing up. Every Variable of Us follows her journey through depression and hopelessness after having that opportunity stolen away, and sees her slowly come to accept that she is more than just her basketball prowess. The daughter of a drug addict and victim of years of abuse, Alexis has come to see herself through a distorted lens. She knows that people outside her neighborhood see Black girls like her as little more than violent thugs destined to become addicts, and initially she allows herself to give in and believe this is her only path. It takes Aamani to show Alexis the truth, that she is so much more than those lazy stereotypes, and to prove to her that she is both highly intelligent and deserving of a bright future.

Although Every Variable Of Us is technically a sapphic romance, the relationship between the two main characters is actually fairly minimal. Alexis is scared of being labeled as gay, something she feels will put an even larger target on her back, and Aamani comes from a religious Hindu household with parents who are determined to “pray the gay away” and set her up in an arranged marriage. With so much else going on, there’s little time for romance between the pair but that doesn’t detract from the story. I loved watching the friendship evolve between the two girls and the rest of their STEM team as well which included some autistic representation. Aamani is a wonderful character who loves Doctor Who, Marvel comics, and cosplaying, and it’s great watching her slowly introduce Alexis to these fantasy worlds she’s never had the opportunity to explore before.

I ended up loving Every Variable Of Us and I hope it can end up in the hands of young people like Alexis to help them also see that they deserve more than the negative stereotypes they are too often burdened by.

‘What’s the Big Deal About First Ladies’ Is the Perfect Book for Young History Fans!

What Has Become of Oldies Radio?