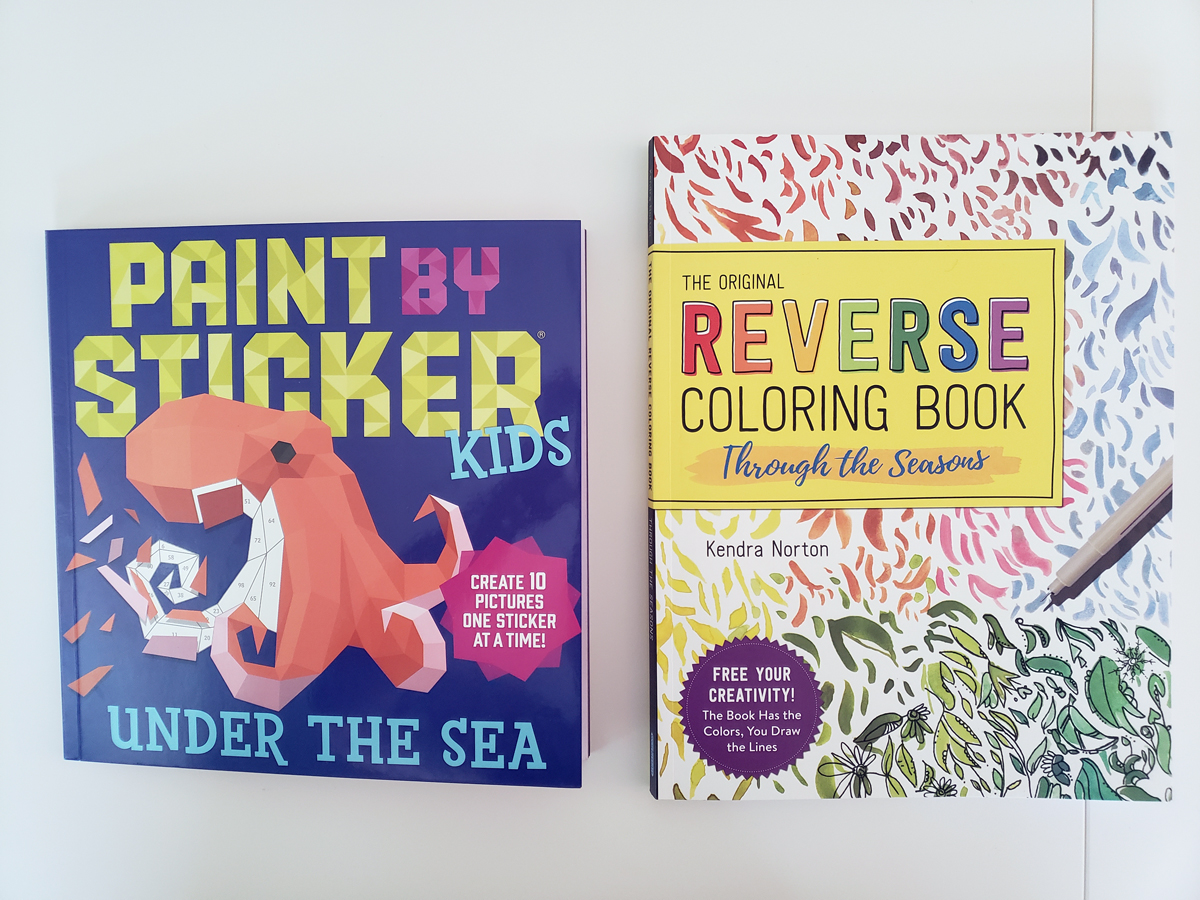 Summer vacation is officially here for us, and with that comes another common parenting challenge: keeping the kids from wanting to spend all summer in front of screens. This is sometimes an extra challenge for us because we live in the southwest where we hit 100 degrees before April was even over, so no one wants to go outside in the middle of the day especially as we are headed for extreme heat warnings. Add in the fact that we are a household of geeks and many geek hobbies include screens, and suddenly being inside in front of a screen makes a lot of sense. I was excited for Workman Publishing to send me several activity books because I want more choices for my kids that aren’t screen-related right now. We were sent the Paint by Sticker Kids: Under the Sea book and the Reverse Coloring Book: Through the Seasons.

W, our more artistically inclined eight-year-old was the first to want to check out the books. He went straight to the Paint by Sticker book and was absolutely content to take over half of the craft table and work on his book while I painted gaming terrain. Each of the 10 pages comes with a full sheet of pictures, and there’s a decent number of stickers too. The stickers are all in numbered order, which makes it easier for a kid to find which one they need. If you’ve never seen one of these books, the concept is simple. Kids get a picture with numbered sections and they find the sticker with the matching number and place the sticker in the spot doing their best to match up the lines. The resulting patterns almost feel stained glass-looking.

One of the nicest things about this as an activity is there’s little clean-up. At worst, we tucked the sticker sheet back into the book and put it away. W was able to fill in those random twenty-minute windows by putting some of these together, and the low number of materials meant he was able to bring them into the car to work on while running errands. He kept getting more and more excited to show me the pictures he finished. A, our eleven-year-old, eventually found himself wanting to make one to one afternoon. There’s something very simple but relaxing about it as an activity, and they’re both talking about wanting to get more, especially when they discovered our favorite local gaming store carries them. It was about a week or so before they completed the entire book, but they actually did complete the entire activity book. For the $10 range, this is sort of an easy buy for kid entertainment, and I love the fact that this is a very portable and low-mess kind of activity too. You can grab this book from Workman Publishing or find out who else carries it here.

The next activity book is something a little more unique and different, so I had to check it out. This was a Reverse Coloring Book. The idea behind this is simple: usually in coloring books you get the outline of an image and it’s your job to fill in the color. This time, you get the color and you have to make the outline. It feels like trying to decide what a cloud looks like but with watercolors instead of clouds. W wasn’t as certain about this, but I opened a page in front of him and let my brain start doing the work.  We got the seasons version of the book, so each section has a color theme that’s seasonally based. Some of the pictures more obviously lend themselves to a certain shape, others are a bit more freeform. In one, I found a few shapes that made me think of birds, and that’s what I started to outline. W watched me do this and then noted that a few smaller shapes could be feathers. I let him describe to me how to outline it, did as he said, and then handed over the pencil so he could find some other feathers.

He slowly started to get the idea. I also found a shape that made me think of an otter (one of my favorite animals) and outlined that. We noted some bug-like shapes as well. I really like the creativity options in this one, and I feel like it could be fun for people who journal and like doodling. Simply cut out some sections of the pages to paste into your journal spreads and then you can doodle on them during the day/week/month.

This book runs for $14.95, which is well within the range of other coloring and activity books for older kids/adults that I’ve seen. You can grab it directly from Workman Publishing or find other stores that carry it here.

Geeky Gifts for Your Geek Dad!