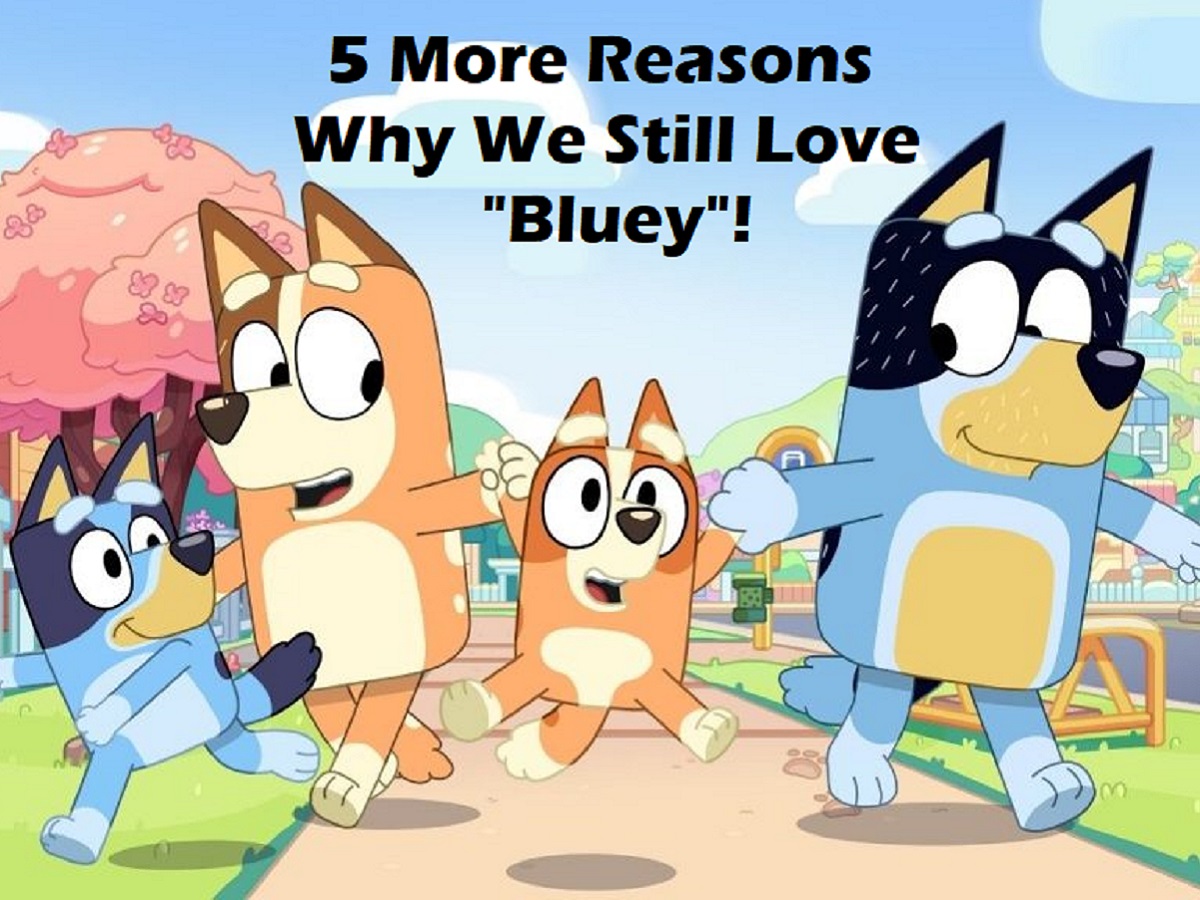 Bluey is hands down the best kids’ show on television. I’m a simple judge. I only ask for a kids’ show where I do not feel the need to yank out my eyeballs and use them as stuffing in my ears to block out any ridiculous singing, whining voices, or horrendous behavior (from children AND adults). Bluey is one of the few television shows to pass this test with every single episode. Plus it has the bonus superpower of convincing children around the world that Australia really is the superior country. Admit it. You want to live here too. But that’s not the only reason why I love Bluey. When Bluey was first introduced to international audiences back in 2019, I had 12 Reasons Why You Will Love Bluey. Now with the release of the complete third season in Australia (the rest of you have to wait-how outrageous!), I have 5 More Reasons. And in true Aussie-style, neither Bandit nor I care about the accuracy of any of the following statements.

But you know they are all true.

Bandit is the larrikin who is fun and engaging with the kids, but it is Chilli who brings the perspective and talks the kids through each learning experience. Don’t get me wrong—I love Bandit! It is so refreshing to see a genuinely involved dad who is not reduced to a bumbling fool in every episode. Bandit captures the good ol’ Australian “larrikin” personality, that person who is always having a laugh and likes to exaggerate the situation until you see how ridiculous it is and achieve your “Oh, I get it now” moment. Moms, dads, grandparents, any gender carer, we all have that person in our family somewhere. However, Chilli takes the role of the explainer. Chilli shows us how to explain situations to kids that include them in the storytelling rather than just telling them. She is our narrator and often I feel like she is the narrator for all the geek moms out there and not just her kids.

Every episode of Bluey is relatable and every character is welcome with their own unique characteristics and abilities. Taking sensory-sensitive kids to the movies, ADHD kids at preschool, and most recently the use of Australian Sign Language (Auslan) in an episode. In “Turtle Boy,” a new kid shows up at the park and communicates in Auslan with their mom, who also communicates in both Auslan and audible speech. The episode boosted interest in basic Auslan signs, with this video shared by Australia’s ABC on Facebook.

Bluey’s inclusivity is blended seamlessly into the storytelling without fanfare. Because representation matters—it is part of our everyday world. Once again, Bluey shows the right way to include representation within the show.

BTW: for more on Auslan and the importance of all sign languages, check out our Make/Play/Watch/Read article on Sign Languages.

Bluey Appeals to Every Age

Okay, so I mentioned this one in my previous article, but it is worth mentioning again. Sure, Bluey is marketed at the preschool audience. I don’t care. I missed the new episode on Tuesday night earlier this week. And do you know what I did as soon as the kids were in bed? I loaded it up on the ABC iView streaming service and watched it by myself. With no kids. Now take a guess as to who was the most upset when they found out the next morning. MY 15-YEAR-OLD SON!!! New house rule: we watch all new Bluey episodes as a family. Non-negotiable.

Peak-Parenting Is a Guest Spot on Bluey

According to my kids, I will finally be a cool parent when I score one of the coveted “guest roles” in a Bluey episode. In previous seasons, these prizes have been handed out to Australian icons like Hamish Blake (the best of all the LEGO Masters hosts ever) and Myf Warhurst (former Triple J radio presenter, including many Hottest 100 events). However, season 3 has really raised the bar and I don’t think I’ll be guesting anytime soon. Not while they have Lin-Manuel Miranda (as a horse named Major Tom) and Natalie Portman (narrating a whale-watching documentary). It’s okay. Maybe they’ll call me for season 4.

The Music Catalogue Is Brilliant

Bluey’s soundtrack is downright brilliant, blending classical pieces with modern renditions. The main theme alone is already a fan favorite. It was recently voted in at number 83 in ABC’s “Classic 100: Music for the Screen” (check out the official list here). Throughout the episodes, famous classical pieces have been woven into the storyline and subsequently encouraged more kids to learn about music. Holst’s “The Planets” completed the episode “Sleepy-time” in a way no other music could. In saying that, I also have no shame in admitting my love for the “Thong-a-ma-phone” in the episode “Dance Mode.” Full credit to Joff Bush, Bluey’s composer and guest spot as the Busker.

I am not afraid to admit Bluey is my absolute favorite show on the screen. Better than Star Wars and Marvel or anything else you suggest. This is the playground hill I am prepared to die on. If you want to argue with me, remember that I have access to all of season 3 on Australian TV. Everywhere else in the world has to wait for Bluey to update on Disney+ later in 2022.

Trust me—it’s worth the wait.

Just a Spoonful of Truth in Saving Mr. Banks