Living in New York City, we try to make the most of what the city has to offer. We hit the museums often, try out new restaurants when we can, and take in the occasional Broadway show. One thing that never occurs to us to do is go see a taping of a TV show, except for that one time I went with a group of friends to see Regis host Who Wants to Be a Millionaire?

Then a couple weeks ago, my husband came across the @Spiffomatic64 Twitter feed, which provides up-to-the minute news on tickets for The Daily Show and The Colbert Report. My husband went to a taping of The Colbert Report when it first came on the air and was easy to get tickets, but somehow tracking down tickets to The Daily Show seemed hard. And we’re lazy like that. But with @Spiffomatic64, *poof* we had ticket reservations with no problem. They even list tickets for same day, so it’s definitely worth having a look if you’re passing through town or have an afternoon to kill.

And it does take all afternoon. First there’s ticket pickup, which opens at 2:30 but people probably start lining up for around 1:00. You only need one person from your group to take on this task. My husband got there around 2:00 and was number 134. Everyone else in your group has to pick up tickets by 4:00. The line-up in numbered pens began at 4:30. (I’m making it sound more like cattle than it seemed. It was quite civilized.) While in the numbered areas, people came by to tell us the rules. First the little hipster kid gave us the run down of how it would all play out: We’ll get into the studio where everyone has to stay in their seat. We can go to the bathroom now if we want. Jon will come out for a Q&A before the show, etc., etc. The best part was this kid talking about the Q&A: “Just don’t be weird. Think about your question in your head, and if it sounds a little weird to you it’s going to be super weird to everyone else. So don’t be weird.” Then the guy who looked more like Secret Service came out as an enforcer to the rules. I have no picture of inside the studio to show you because no way was I going to face the wrath of this guy.

At last, we were seated in the studio. We were numbers 134 and 135, and only a handful of people made it in after us (they overbook, so here’s where the getting early to the ticket line comes into play). For the first 15 minutes or so, it was very exciting just to check out all of the details of the set, which is amazing in person. We were hoping to see a green-screen correspondent segment because we couldn’t figure where they would record them on set. We were in the very back row of the studio, which doesn’t feel as intimate as it does on TV, but it was still a great view. Then there was more waiting while listening to incredibly loud music. I realized that without my electronic devices, I’ve totally forgotten how to wait. It was hard not to get antsy knowing I could be using this time to check work emails, seeing as how I was playing hooky to go see The Daily Show.

I joked with my husband about the warm-up act for Regis. You know that comic Paul Mercurio? I never got off his mailing list after he was working the crowd outside Millionaire. Sure enough, out comes Paul Mercurio, who again passed out paper to get people on his mailing list. Way to hustle.

Finally, out comes Jon Stewart for the Q&A. The audience, despite the hipster’s warning, was totally weird. One girl had this whole thing about making Jon a bumper sticker and it was her friend’s birthday and then this funny happened to them… Jon couldn’t get a word in edgewise. One girl asked him what he would ask Jane Austen if he had her on as a guest back from the dead. I can only imagine what he got asked before the ‘weird’ warning. You can see why he’s always making jokes at the audience’s expense. Audiences are weird.

Then it was showtime. There were monitors throughout the studio which showed the show as it looks at home, with the graphics and clips put in. I kept finding myself watching the monitor and not the desk, until I remembered that real-life Jon Stewart was just to the left of that monitor. The first segment was all about the latest Republican primary debate, with lots of Santorum footage. For more, Jon turned to Senior Political Analyst John Oliver, who was hilarious.

This segment ends with a brilliantly-crafted joke, which John Oliver flubbed a little bit. I was curious if they were going to redo it. During the commercial break, Jon and a couple of others (writers? producers?) leaned way over the desk in John Oliver’s face looking all serious. I watched a lot of The Larry Sanders Show back in the day, which made me really wonder what they were talking about and if it had anything to do with what they had just taped. They didn’t end up redoing anything, and John Oliver headed off with a friendly wave.

The guest was Paul Rudd. Why, yes, since you ask, he is even more adorable in person. He came out with candy for the crowd, which gives you a chance to see the extent of the studio audience. The interview was basically all about candy. I left the show starving for some Smarties.  He didn’t get the extended interview, so after a couple of minutes off he went. Then Jon reshot one joke from the first segment for time, and that was it. He came back out, thanked us for coming, and bid us adieu as we headed out into the night.

It was definitely worth doing, and it’s made me want to see more. Colbert is on my list, and it seems like we should see Saturday Night Live at least once. My sister heard we were seeing The Daily Show and demanded that I get her Jimmy Fallon tickets the next time she’s in town. Anyone got an inside scoop on that one?

What would you go see given the chance?

Five Ways to Get Poetry Into Your Day 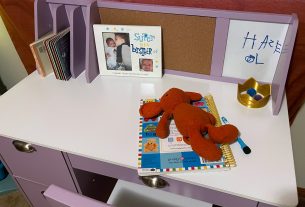 GeekDad: KidKraft Study Desk – When a Desk Is More Than a Desk

2 thoughts on “Make Your Date with Jon Stewart”