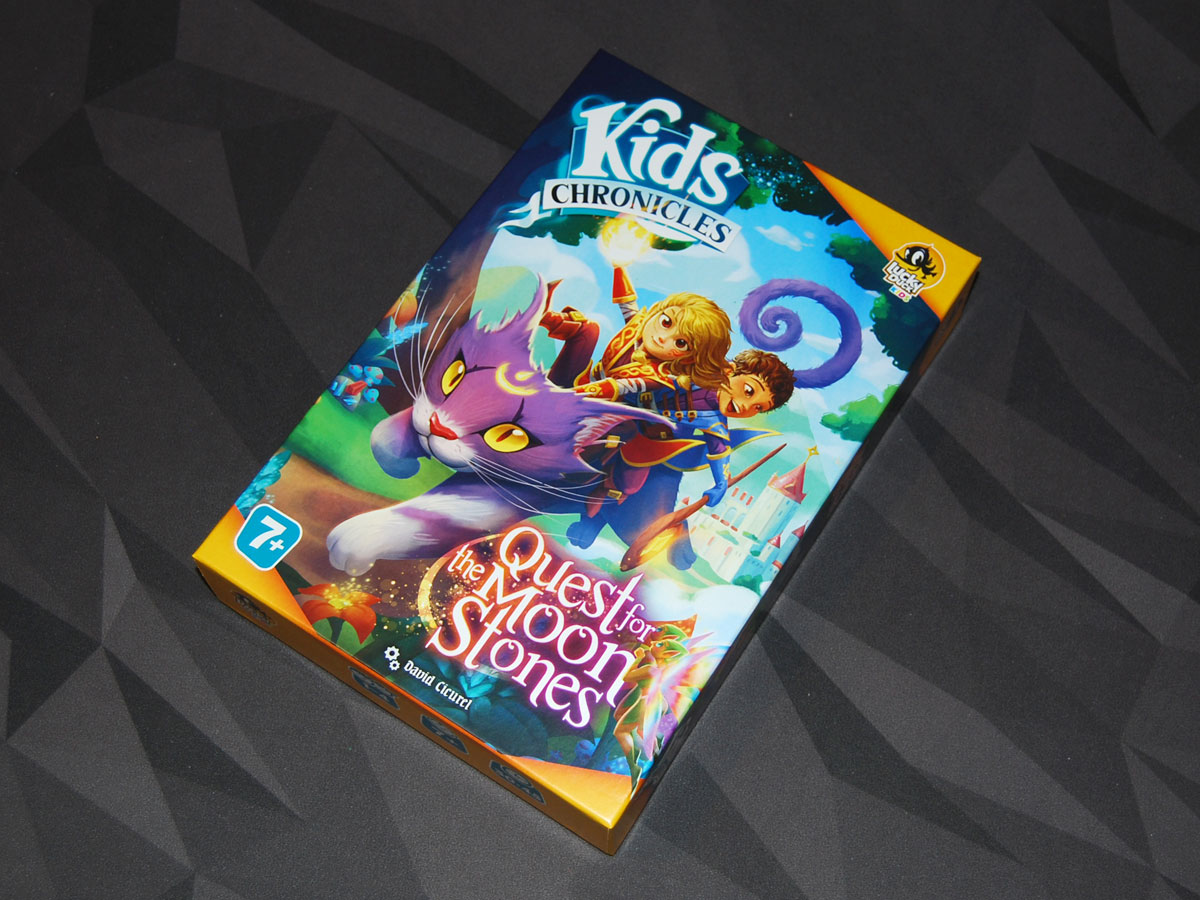 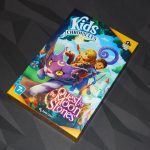 You are Merlin’s apprentices, in training to become magicians—but first you must track down the four moon stones!

What Is Kids Chronicles: Quest for the Moon Stones?

Kids Chronicles: Quest for the Moon Stones is an app-assisted cooperative game for 1 to 4 players, ages 7 and up, and takes about 30 to 45 minutes to play. It uses a similar system to the Chronicles of Crime series, scanning QR codes on cards to make progress through a story. The stories are kid-friendly, and the difficulty level of the mysteries is fairly low. Quest for the Moon Stones retails for $24.99 and is available in stores now or directly from Lucky Duck Games.

Kids Chronicles: Quest for the Moon Stones was designed by David Cicurel and published by Lucky Duck Games, with illustrations by Chanon Torncharoensri, Whihoon Lee, and Maryna Nesterova.

You’ll also need your own mobile device to run the free app, which is available for iOS or Android.

The game board shows the Summer Kingdom on one side and the Winter Empire on the other; each scenario will tell you which side of the board to use. Each side has a map showing several locations, and each location has its own QR code and spaces for two cards. There’s also room for some cards on the left side of the board, and a section at the bottom for item cards in your possession.

The character cards each depict a single character with a blank white background and a QR code at the bottom. The illustrations are cartoony, and there’s a mix of humans and other creatures. They’re cute, though I was slightly disappointed to see that only one person in the whole stack has darker skin, even counting the human-adjacent creatures.

The item cards are half-sized and include a number in addition to the QR code, though as far as I could tell the numbers are never referred to anywhere. The various items range from the mundane to the magical, each depicted on a dark background.

How to Play Kids Chronicles: Quest for the Moon Stones

You can download a copy of the rulebook here. A lot of the instruction appears in-game through the app.

Each scenario has its own goal, but generally you’re trying to solve some sort of mystery: discover the culprit behind some stolen items, find a missing prince, and so on.

Setup is usually pretty quick: open the board to the side indicated by the app, and maybe place a character card at a particular location. Set the rest of the cards nearby. (Of course, you’ll also have to download the app itself, as well as the individual scenarios.)

Each scenario plays out a story, usually introduced by Merlin, though not always. Whenever you visit a new location (sometimes including when the scenario begins), you’ll get to look around the location, either by moving your device around like a viewscreen or by swiping if you prefer to sit still. Each location may include characters or objects—you retrieve those cards from the decks and place them onto the board (characters in the location, and items at the bottom of the board).

Scanning a character allows you to interact with them—then you can scan other cards to ask that character about them: objects you’ve found, other characters you know about, and so on. You can even ask them about themselves. The story will be displayed on the screen for you to read, and you can always scroll back through any of the story you’ve already seen.

Scanning locations on the board will let you travel, though you have to follow the paths from one place to another and you can’t skip over locations.

Over the course of the game, you’ll basically be talking to people to figure out what the problem is, and then looking for the right items to solve each issue.

The game ends when you’ve completed whatever task has been set to you; sometimes there are also some additional questions to answer (by scanning cards), which can affect the narrative ending provided. Unlike Chronicles of Crime, you don’t get a “score” at the end, but we did discover that some endings are better than others.

Currently there are 5 scenarios plus a brief tutorial to show you how the game works. After the tutorial, the first four can be played in any order and are about collecting the four moon stones; the last scenario can only be downloaded after you’ve collected all the stones.

Why You Should Play Kids Chronicles: Quest for the Moon Stones

I’m a big fan of the Chronicles of Crime series, which Lucky Duck has continued to expand with more locations, characters, and even different time settings. I like trying to puzzle through the mysteries, and figuring out what questions to ask each character, or when to use a particular item, to reach the right conclusion. With the previous games, though, the subject matter hasn’t always been appropriate for my kids—one series, set in London, had some gruesome parts that even my teen wasn’t comfortable with.

So I was really excited to hear that Lucky Duck—under their new Lucky Duck Kids imprint—would be creating a kid-friendly version of the game. Quest for the Moon Stones has princes and princesses, fairies and witches, giants and dragons—a fun fairy tale setting where the problems you solve are a bit sillier and light-hearted (though they do say that the whole kingdom is at stake). I played through the whole storyline with my 8-year-old in one weekend, and we both had fun with it.

The mysteries in Quest for the Moon Stones are significantly easier than in Chronicles of Crime—enough so that I thought they were perhaps a little too easy, at least for an 8-year-old. After the tutorial, you get a companion, Nils, the moon cat (seen on the box cover), whom you can talk to if you get stuck, but we never had to ask him for help.

Unlike the original Chronicles of Crime, which were often quite cluttered with objects and you had to figure out what was important and what was irrelevant, the scenes in Quest for the Moon Stones typically have at most three things to find, and they’re usually pretty obvious (plus Nils will tell you how many of each). So while the motion-activated scene searching is fun to do, it doesn’t provide much of a challenge. You also can’t quit out of the scene early, so if you’ve found everything you just have to wait until the time runs out. (In CoC, we often had to replay a search scene if we didn’t think we’d spotted everything.)

Given the subject matter and complexity level of the puzzles, I would say you could play this with even younger kids (with your assistance), particularly since it’s cooperative and has the feel of reading an interactive story together. The player count isn’t strict, since you don’t take turns or each play as a specific character: you just work together and make decisions as a group about where to go or what card to scan next. The app is fairly easy to use—my daughter and I took turns scanning cards, and I let her look around at the scenes while I read most of the text aloud.

The stories themselves were amusing (and sometimes a little absurd). I was able to see where some of the stories were going myself, but it was fun to see things unfold through my daughter’s eyes as she pieced together the clues. That said, she usually figured out what was going on before everything was totally revealed, too.

Overall, my take on Quest for the Moon Stones is that it’s fun, but I want more—both more scenarios (since we’ve already finished them!) and a bit more of a puzzle to solve within each scenario. I’d love to see something that adds some complexity and challenge, but stays with a kid-friendly theme. It’s a short ride, but one I’d still recommend. If you’ve got kids who like fantasy stories and solving mysteries, it’s definitely worth a play-through!

Click through to read all of “‘Kids Chronicles: Quest for the Moon Stones’” at GeekDad.If you value content from GeekDad, please support us via Patreon or use this link to shop at Amazon. Thanks!