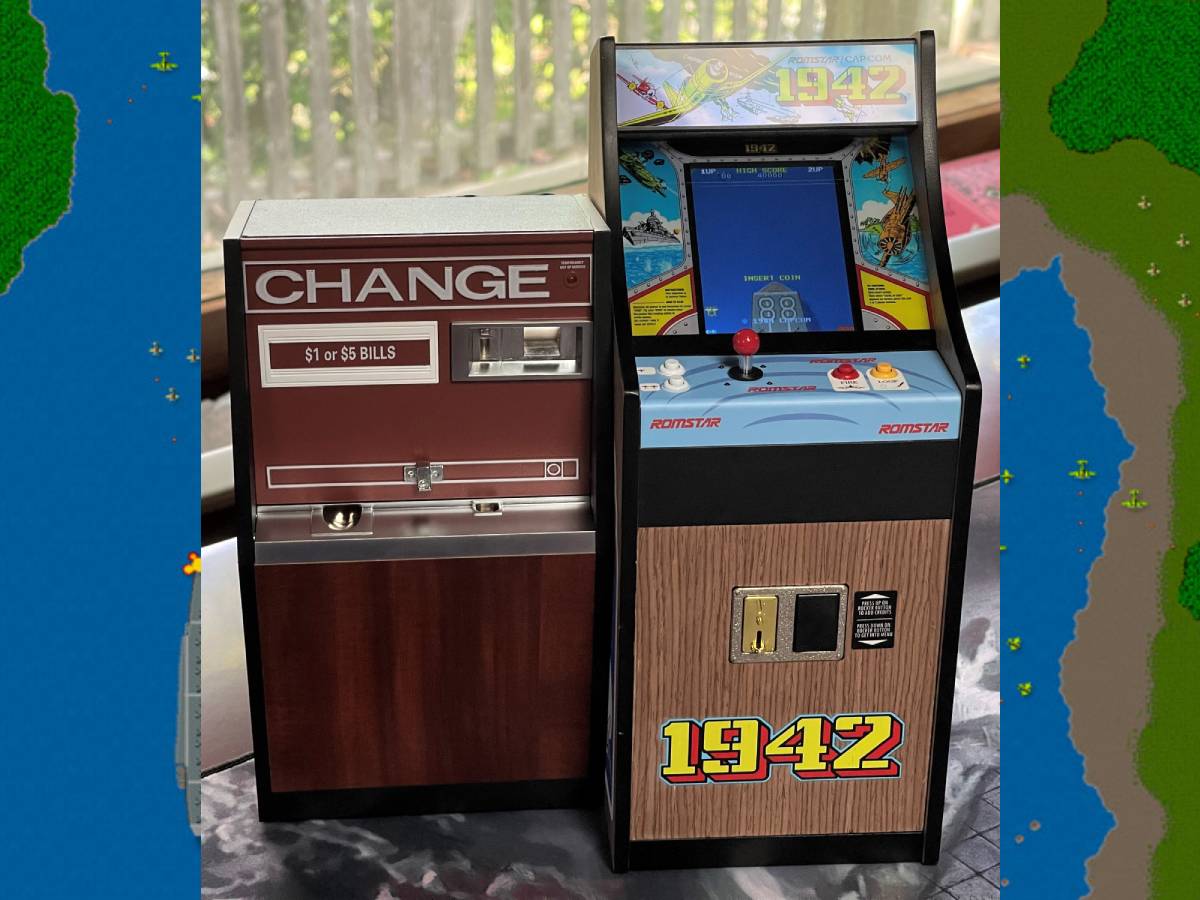 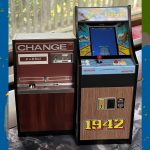 If you’re someone like me, you grew up spending your allowance at the arcade, one quarter at a time. I’ve always dreamed of owning a full-size arcade machine or two, but cost and space have both made that prohibitive.

The 1942 x Replicade is virtually guaranteed to come to you in pristine condition. That’s because the box, pictured above, comes packed inside a thick cardboard box, which is packed inside another thick cardboard box. This may seem like overkill, but as someone who collects 1/6-scale figures and statues, I was delighted to see that level of care taken with a limited edition product.

Opening up the main box, you’ll find the 1942 x Replicade and its accessories nestled in firm foam, providing yet another layer of protection.

Removing everything from its packaging, you’ll find the following:

If you look at the back of the cabinet, you’ll see that there are speakers, a volume control, and ports for connecting external controllers and charging the rechargeable battery. There is also a covered HDMI port, so that you can connect the machine directly to a television or monitor if you want to play on a big screen.

The 1942 x Replicade is designed to faithfully recreate the look and feel of the original Romstar/Capcom 1942 arcade cabinet, just in an 11″ height. It incorporates a tiny color LCD screen, set at vertical orientation.

The cabinet is wood, the marquee and cabinet accents light up, and there’s a nonfunctional diecast coin slot.

And yes, you can indeed play 1942 directly on the 1942 x Replicade, as well as its sequel, 1943. The joystick and button have a feel very similar to what I remember of arcade machines from the 1980s. You can also play with the included controller, as well as some third party controllers. The 1943 controller has a joystick and buttons that are a bit larger than what you’ll find on the cabinet. Additionally, the controls have a distinct “clickiness” as compared to the cabinet’s controls.

And if you’re a collector of 1/6-scale figures such as the ones from Hot Toys or Sideshow Collectibles, the 1942 x Replicade is perfectly sized to display with your figures. As a matter of fact, I couldn’t help but feel that this game would have been the favorite of a certain Star-Spangled man out of time:

No, I didn’t misspell “Change.” This is a 1/6-scale reproduction of an arcade change machine, but unlike the 1942 x Replicade, it doesn’t function like its full-size counterpart. While it might have been entertaining to feed in teeny, tiny dollar bills for the machine to spit out the included gold tokens, this is actually a USB charger. Here’s what you get in the package:

The Replitronics USB Charge Machine comes in both the wood grain that I received, and in a blue cabinet. And as you can see from the back, it has one Quick Charge USB-A 3.0 port, as well as 5 USB-A 2.0 ports.

Like the 1942 x Replicade, the Replitronics USB Charge Machine has authentic styling. The coin slots and dollar bill feeder are non-functional, but you can place the included tokens in the change well.

Opening up those boxes from New Wave Toys and playing with the 1942 x Replicade and Replitronics USB Charge Machine made me giddy as the schoolboy I was when I played 1942 originally. The appearance and feel of the machines is authentic. Both 1942 and 1943 look, sound, and play just as I remember… just on a much smaller screen. But as I said, you always have the option of hooking the 1942 x Replicade directly to your television if that’s an issue.

Spending some time with these machines, I now have a much more realistic fantasy than when I dreamed of having life-size arcade cabinets in my home. Now, I want to make my own 1/6-scale replica of Flynn’s arcade from Tron, inhabited by all of my different Hot Toys 1/6-scale figures. Oh, New Wave Toys, what have you done to me? I guess you’ll also need to make that Tron cabinet for my plan to fully come to fruition.

In addition to the 1942 x Replicade, New Wave Toys will soon have a replica of the 1943 cabinet available, as well as reproductions of Q*Bert and one of my longtime personal favorites, Missile Command. All of the Replicade arcade cabinets are limited edition, so the 1942 x Replicade won’t be around forever. New Wave Toys has previously retired Asteroids, Dragon’s Lair, Street Fighter II, Tempest, and Centipede. But hopefully they’ll have many more to come. There are still so many great classic arcade cabinets, and New Wave Toys provides a unique and affordable way to collect them.

New Wave Toys provided me units for evaluation, but had no input into this review. As an Amazon affiliate, I may earn a small commission on a qualified purchase.

Click through to read all of “Put an Arcade on Your Bookshelf With the 1942 x Replicade and the Replitronics USB Charge Machine From New Wave Toys” at GeekDad.If you value content from GeekDad, please support us via Patreon or use this link to shop at Amazon. Thanks! 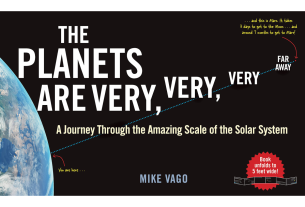 GeekDad: The Planets are Very Very Very Far Away: A Book Review