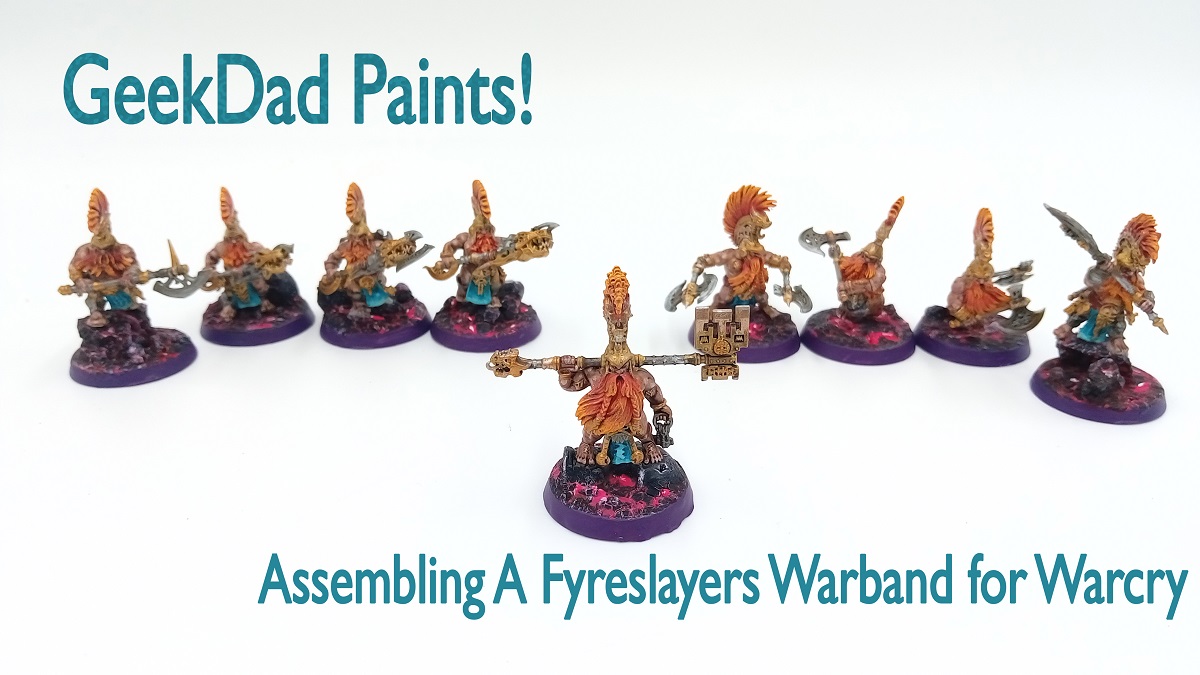 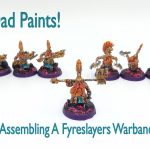 With nothing else to occupy myself with in the evenings, my newfound Warhammer Warcry hobby has taken on a life of its own. During Lockdown in 2020 I finished painting the Catacombs starter set and decided that next I would focus on building and painting as many Age of Sigmar warbands as I could to fight in the depths of the fiery catacombs.

So far in my quest to build, paint and battle as many warbands as I can I have managed to assemble:

Now is the time for the Fyreslayers—Fearsome dwarves born of fire and ash.

Fyreslayers are a short and stocky race of humanoid Duardin. From their mountain hold, the warlike zealots of the Fyreslayers march to battle. Each one a fearsome foe, wielding finely crafted weapons and empowered by the divine energies of their god. Or so I’m lead to believe. 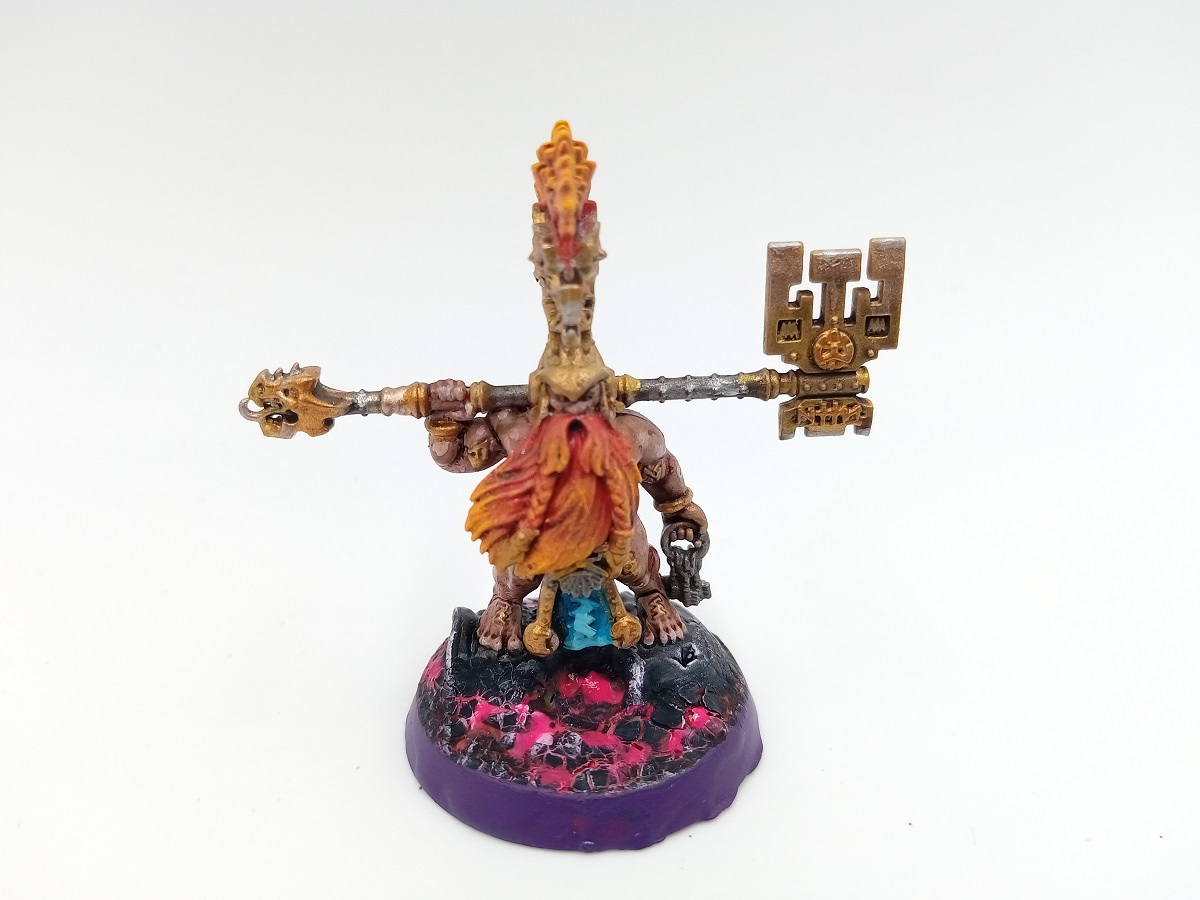 The armies in Warcry are broken down into four Grand Alliances: Order, Chaos, Death, and Destruction. Each order has an accompanying book with includes all the fighter statistics for the armies of that order. The Fyreslayers belong to the Sentinels of Order and that book includes 17 fighter types allowable in Warcry. For my warband I used eight different types of fighters. 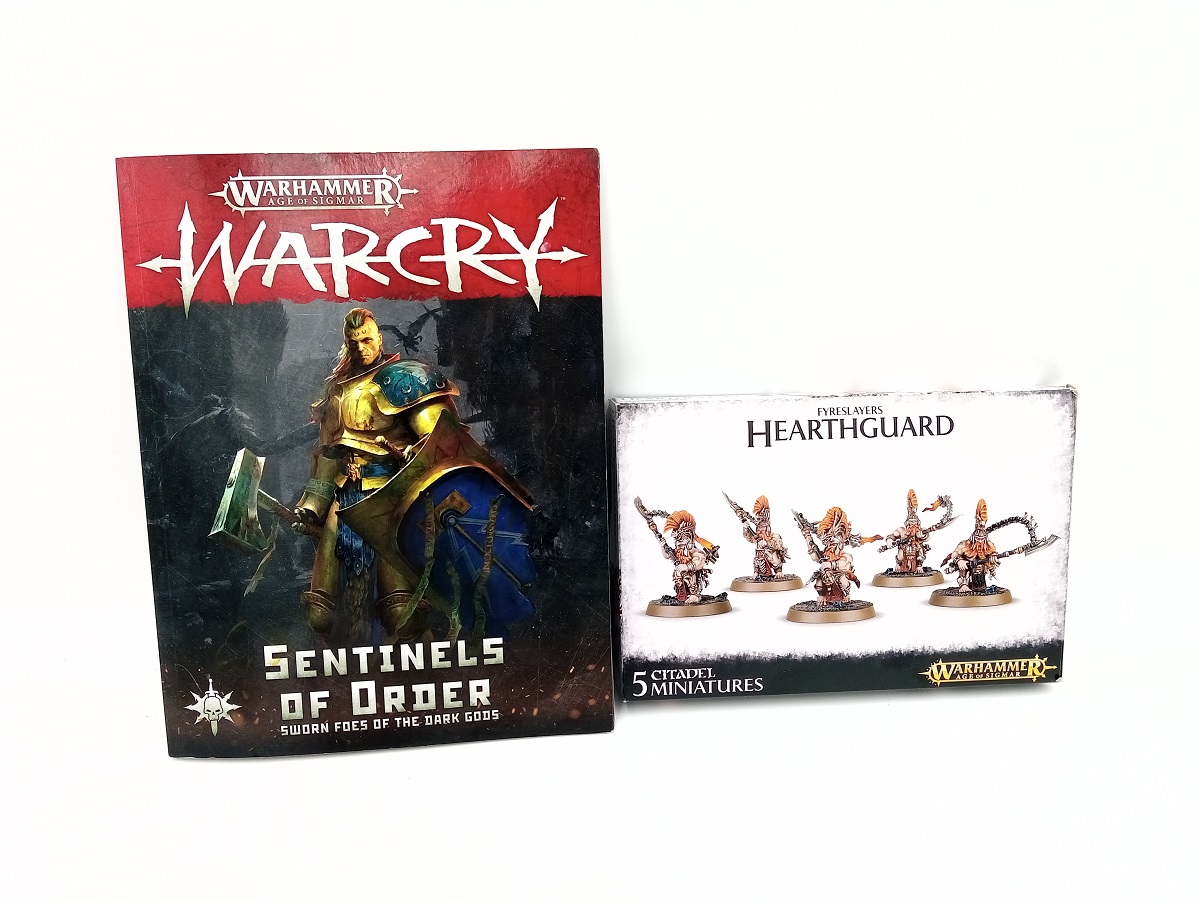 To help build my warband I picked up a copy of the Sentinels of Order book and two sets of Fyreslayers. The Fyreslayers Hearthguard set and Chosen Axes easy-to-build set gives us nine models and enough variety to put a fun warband together. It’s also a relatively cost effective way of assembling a Fyreslayers warband.

So far, Games Workshop have not released a Fyreslayers warband for Warcry or the fighter cards, but by using the Sentinels of Order book alongside and my printer/scanner, I tried to work out the most efficient and economical way of putting a Fyreslayers warband together. My objective was to have as many different fighter types as possible for as little outlay as possible, so I did some research, fired up my Excel spreadsheet and went to work.

For my previous Skaven warband I purchased a Start Collecting set and I could well have done the same here for a Fyreslayers warband. However, I decided not to as I would then end up with too many additional unused figures, and I also wanted to see if I could do it cheaper. The two sets I found were marginally cheaper than the Start Collecting Fyreslayers but I would have to be happy to proxy some models and be a bit more flexible with my interpretation of the named characters—especially in the Chosen Axes set.

The Chosen Axes set is from Games Workshop’s easy-to-build range and so putting these together was very simple. However, this did mean that there wasn’t any options with how I put them together and the bases were already modeled—I usually like to create a different textured base that fits through the whole warband and ties the models together, so I would have to decide if I wanted to keep these pre-modeled bases or remove them and add my own later.

In Sentinels of Order there are four Vulkite Berserker options, apart from the Vulkite Karl (Karl is apparently a Fyreslayer word for leader), they are the lowest points options for the Fyreslayers, so these would be useful in making up the numbers if required later. But I do like the model for Fjul Grimmir. So I decided he would be my warband leader, and I would use the Auric Runefather fighter card for his stats. I would also use the Vulkite Berserker Karl stats for Tefk Flamebearer and could use him as an optional hero for the warband if playing a game where that was an appropriate option. But for the main part, and because they don’t have the sling shields that the other Vulkite Berserkers do, I would use the Vulkite Berserker with Pair of Fyresteel Handaxes stats for the dual-axe-weilding Vol Orrukbane and Mad Meagrim.

So, that made a total of nine Fyreslayers fighters with between four and six fighter types. Now it was time to paint them. 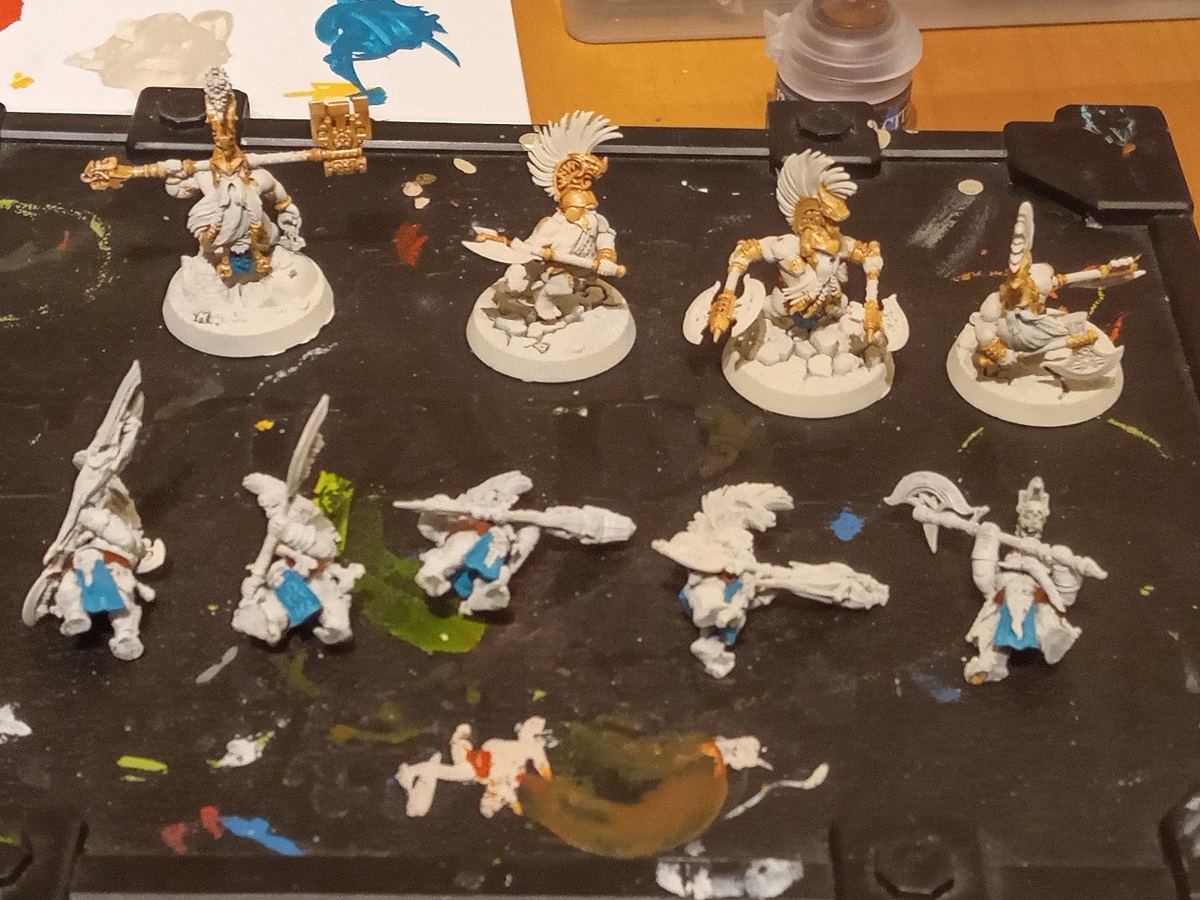 I wanted to paint these as quickly as possible and was using mostly contrast paint, so after an initial primer of Wraith Bone spray I started on the metals and fabrics first. The defining element of this warband are their fiery beards and hair, so I left those bits until last, speed-painting the rest in one batch. I used Auric Armour Gold for the helmets, bracers, runes, and any jewelry on the fighters. I used snakebite leather for the belts, and Aethermatic Blue for their loincloths. I then used a Nuln Oil wash on the metal and leather areas and highlighted with Gehenna’s Gold and Lothern Blue.

Then it was time for the skin. There is a lot of skin on display in this warband and skin is not my forte. But I gave it a shot. You can’t say I didn’t paint the skin.

I started with Guilliman Flesh contrast paint (yes, I know there’s a Fyreslayer’s Flesh paint, but I didn’t already own that, and I was trying to do this cheaply as Christmas is expensive, and my car battery just died). I then applied a highlight of Ratskin Flesh and Kislev Flesh before a final coat of Guilliman Flesh over the top. I felt that this created a “straight from the forge” effect to the skin of my fire duardin.

Finally, came the beards and hair. This is the stand-out element of the Fyreslayers and I wanted to spend a bit more time on getting this right. I used almost all of my orange, yellow, and red paints in a combination of dry-brushing, contrast, and highlighting techniques, and was pleased with the finished look. 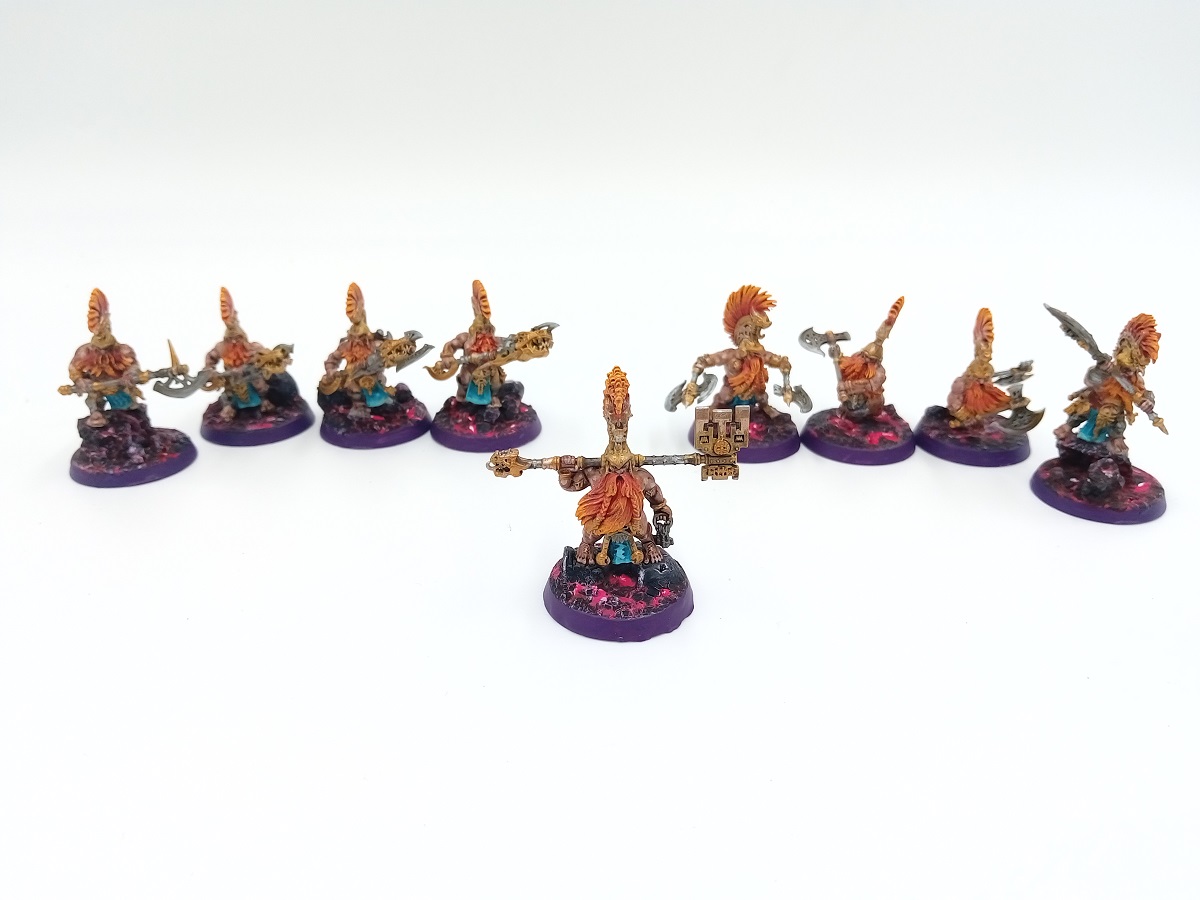 For the bases, I decided to stick with the pre-molded ones from the Chosen Axes kits and attempted to recreate the look for my Hearthslayers. This meant using some cork and stones from my garden to create the texture. Then I painted them all using Blood Angels Red contrast paint and highlighting with some bright pinks. I then used Ardcoat technical gloss and covered with Mordant Earth which cracks as it cures allowing the bright colors beneath to shine through.

With the assembly and painting complete, I now had my 1,000 points Fyreslayers Warcry warband ready to go.

There are positive and negative to running a Fyreslayers warband. They all tend to have quite high hit points, damage output, and defense stats, but they have terrible movement and are quite expensive. So, some missions they will have no chance of beating warbands with more models or higher movement. But they do have some pretty excellent attacks. In addition to their own individual skills, all Fyreslayers have access to three core abilities:

Fyresteel Throwing Axe (Double) – because of course they all have spare axes to throw at their enemies!
Relentless Zeal (Double) – which lets them all move further in a round.
Unleash Runic Fury (Quad) – makes them a lot more powerful.

Fjul Grimmir would be the leader of my Fyreslayers—195 points for the Rune Father is a good value leader and his leader abilities Lodge Leader and Honor Our Oaths are good for buffing up nearby fighters. 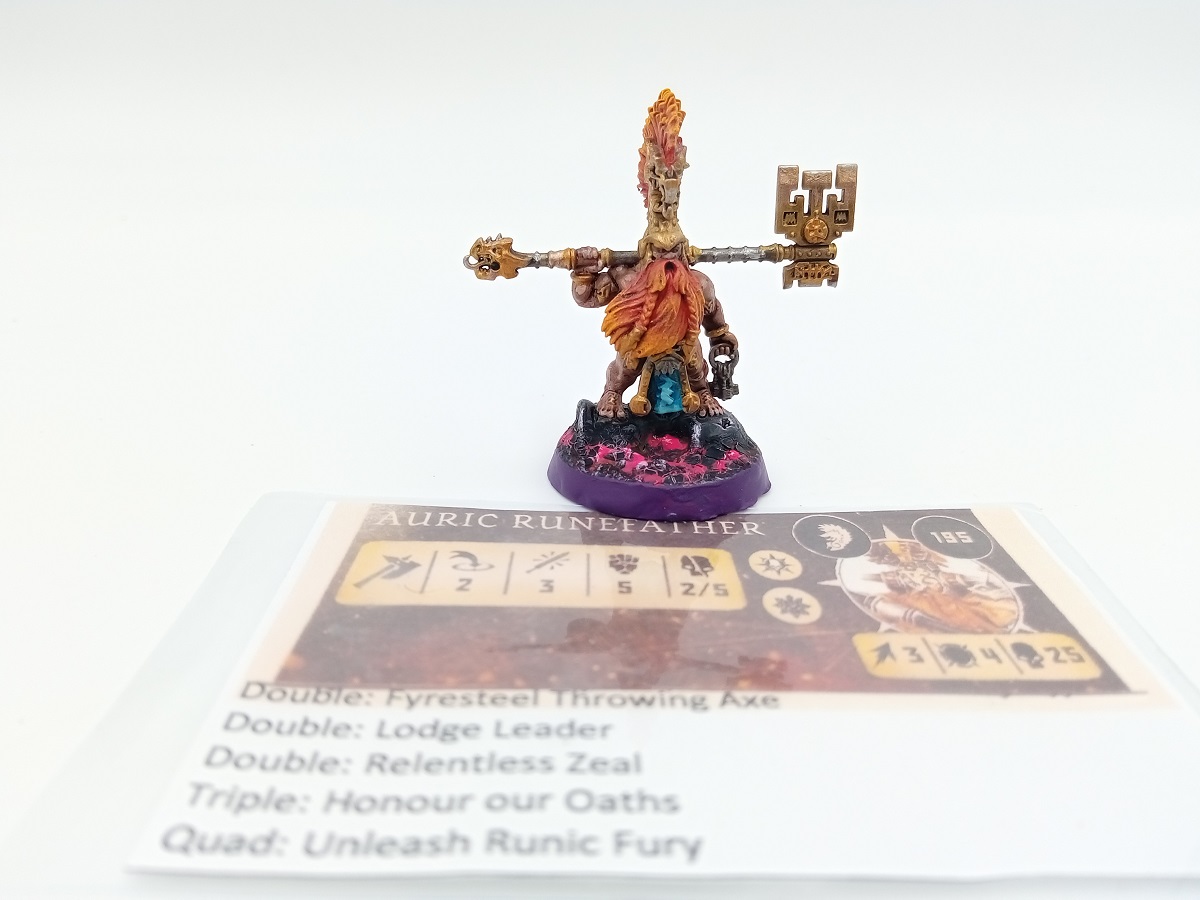 Three Auric Hearthguards make up the leader’s bodyguards. Their ranged weapons and Encase in Molten Rock abilities makes them good value at 125 points each. (Only two featured in the picture below as the third is technically an Auric Hearthguard Karl, but we can proxy him as one of these to make the 1,000 points warband, and then upgrade him later on in a campaign.) 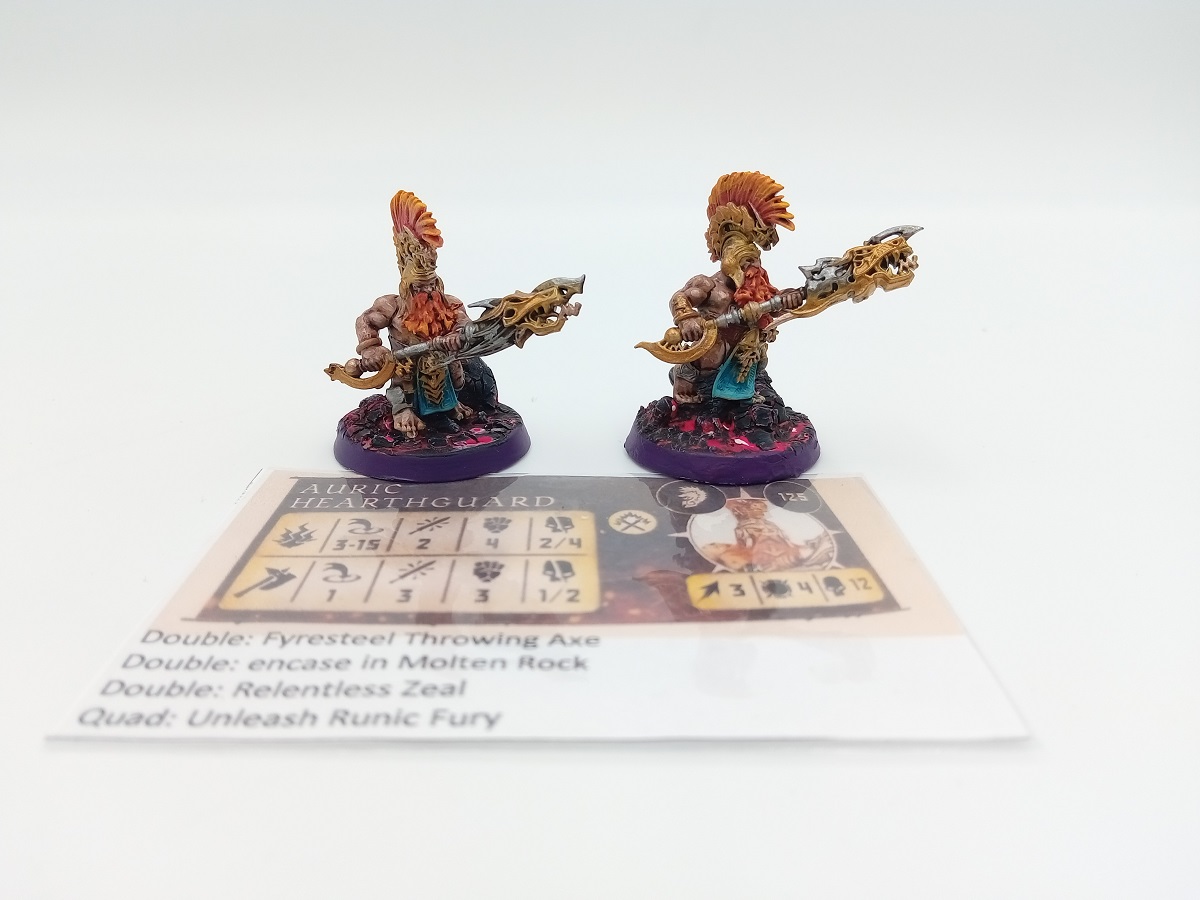 Two Vulkite Berserkers with Pair of Fyresteel Handaxes are the cheap grunts of the warband. They, like the other Fyreslayers have the Fyresteel Throwing Axe ability, Relentless Zeal, and Unleash Runic Fury. But not much else. 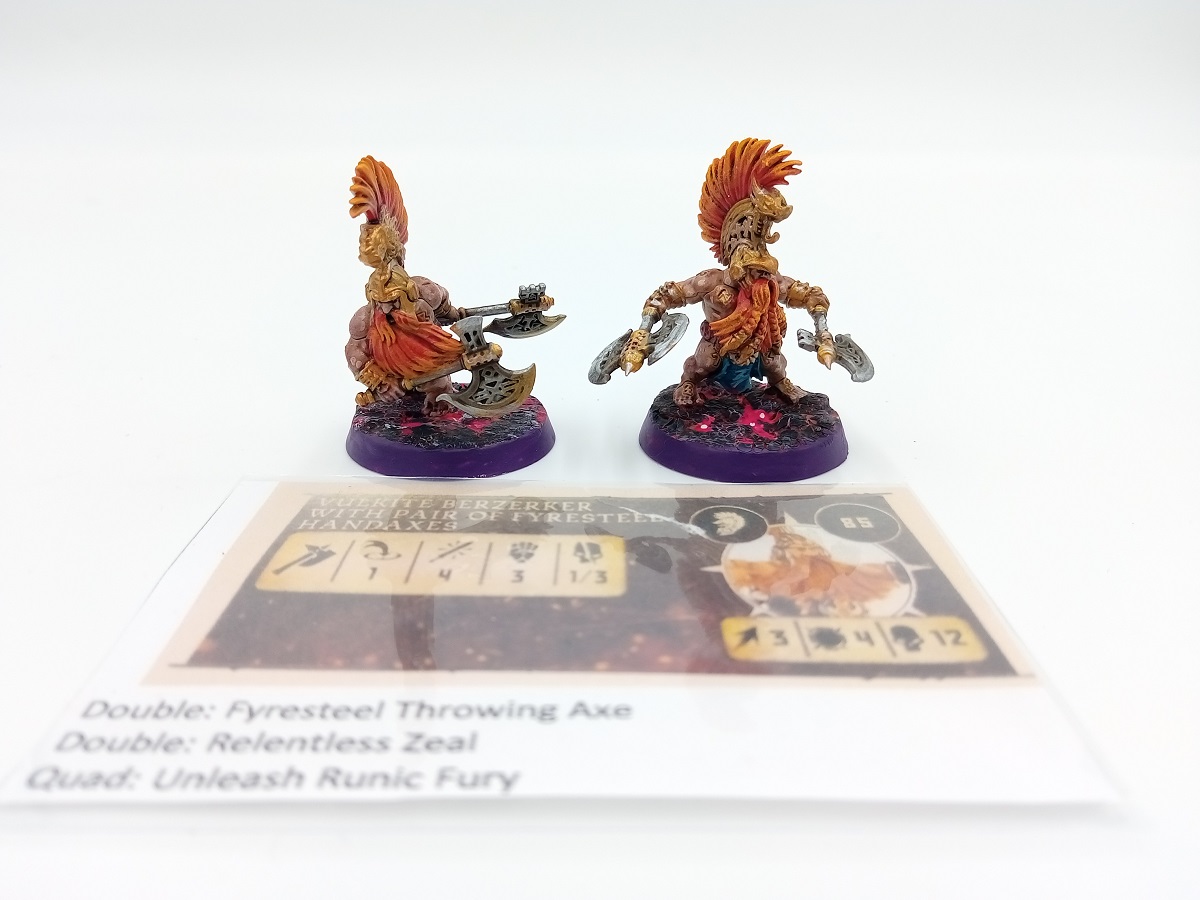 Next, I’ll take two Hearthguard Berserkers with Berserker Broadaxes. For 115 points they have 12 wounds and medium level damage output, and their Duty unto Death lets them make bonus move and attacks if they’ve taken damage, which can be a really useful boost, especially during the third or fourth round of a battle. 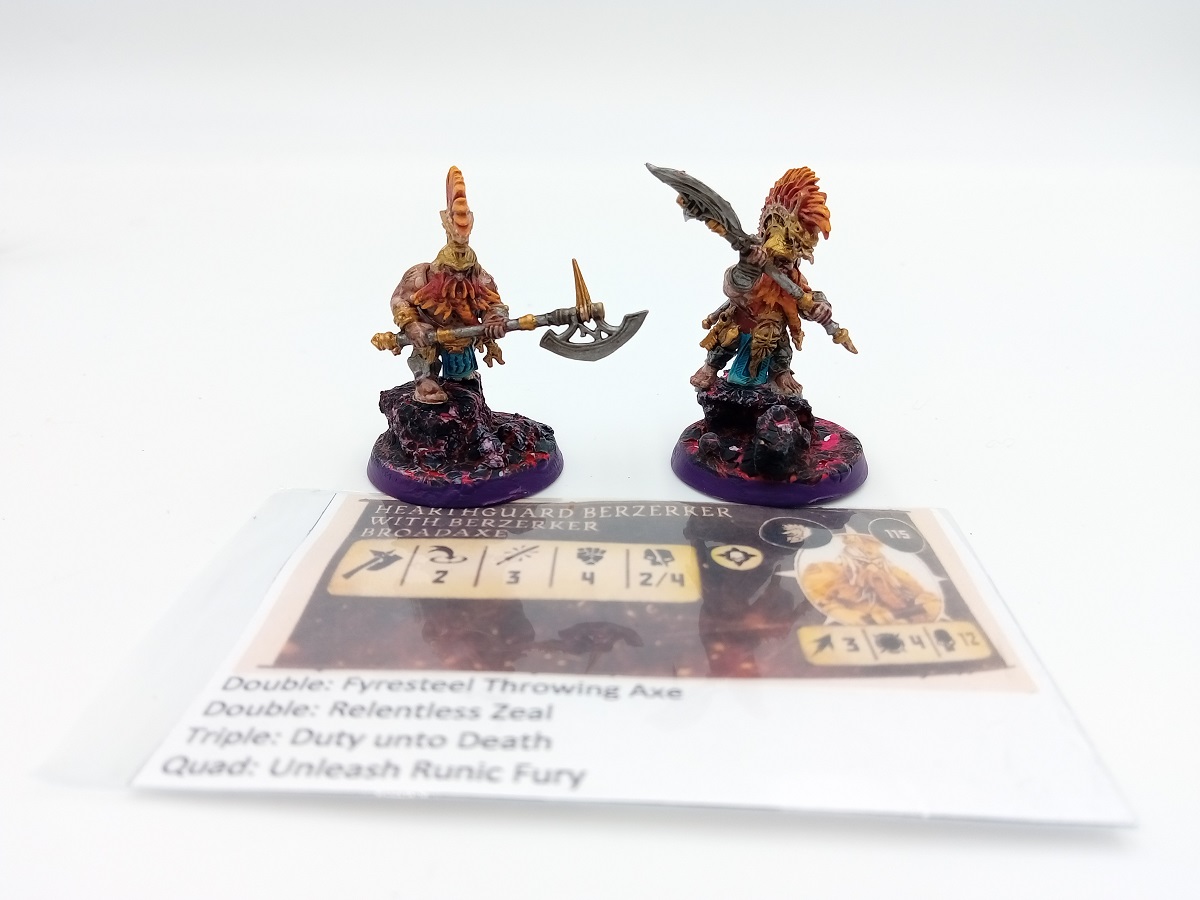 In total, it’s just under the 1,000 points, but that’s as close as we can get with these eight fighters. Having played a couple of battles using this warband and expanding using the Auric Hearthguard Karl and the Vulkite Berserker Karl, I really like this Fyrselayers warband. They could do with some more ranged attacks, a bit more movement, and perhaps something with upwards of 25 wounds, but on the whole they’ll stand up to most other groups of fighters. 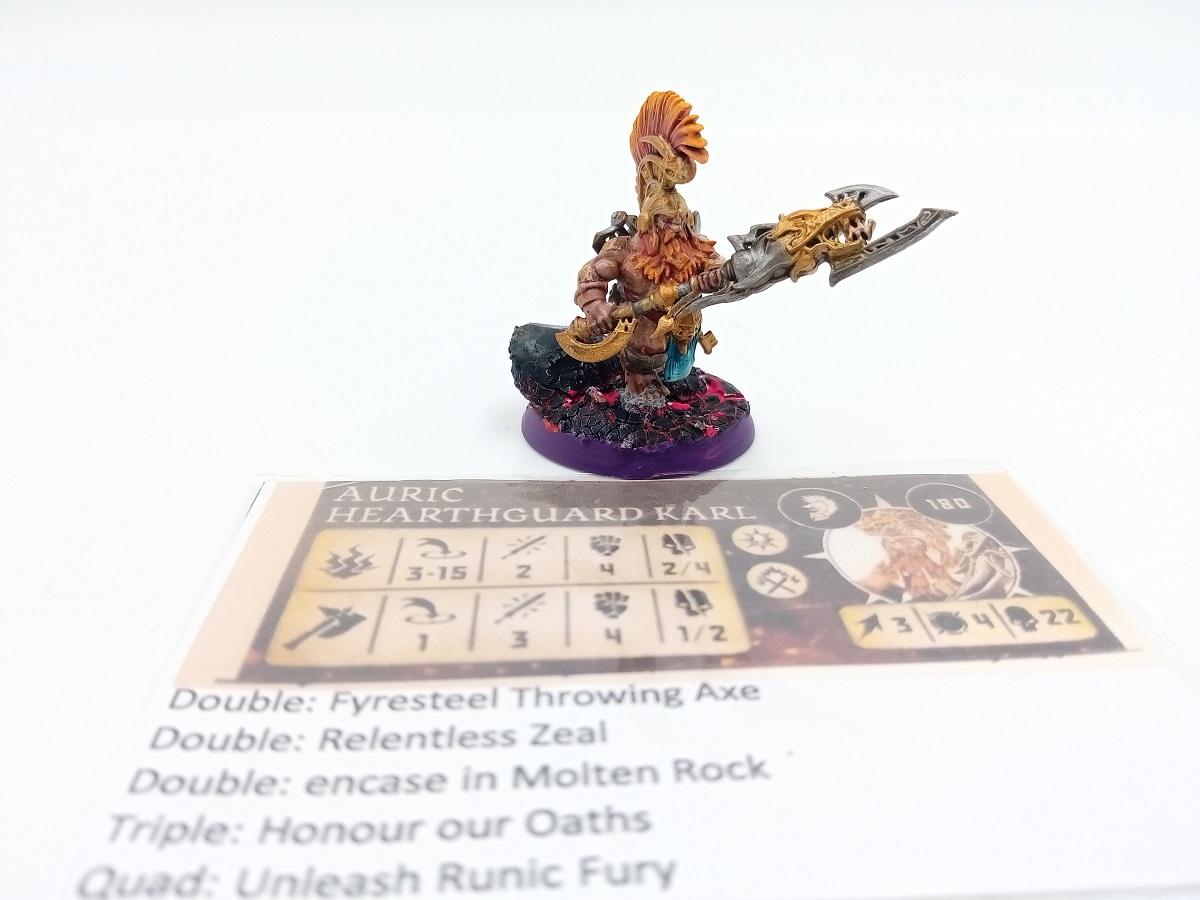 Next time it’s back to the Grand Alliance of Death and a look at assembling a Flesheater Courts warband.

Click through to read all of “GeekDad Paints! Assembling a Fyreslayers Warband for Warcry” at GeekDad.If you value content from GeekDad, please support us via Patreon or use this link to shop at Amazon. Thanks!

Geeking Out with the Disney Dream, Part 5: Stunning Disney Art