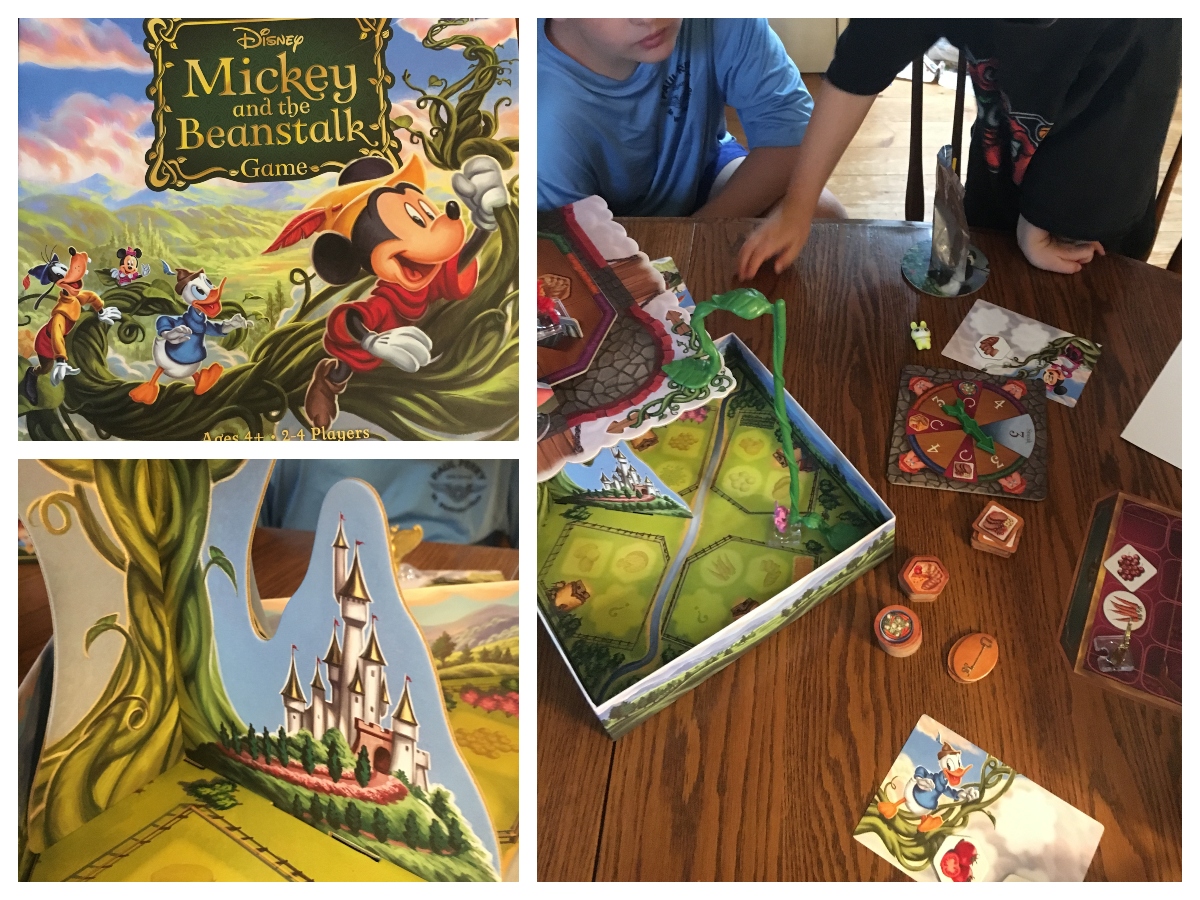 When I was a kid I both loved and hated Mouse Trap. I loved the construction of the game, I loved watching the trap click clack it’s way down to catch the mouse, or catch thin air. I didn’t enjoy waiting the whole game to have construction completed. The new Disney game from Funko, takes the waiting out of the game. In Disney’s Mickey and the Beanstalk Game you pre-assemble the village, the beanstalk, and the giant’s dining room, in order to play a game of thievery and peasant feeding. Having not had the patience to introduce a childhood classic to my own kids, I was delighted to see how much my six year old enjoyed the construction of the board, and sliding down the beanstalk.

The character tokens are not quite what you would expect, but with only three staple characters in the movie itself; Mickey, Goofy, and Donald, of course they needed to simply add a fourth. For our part, we were glad they included Minnie, but I’m a little surprised that Jiminy Cricket wasn’t added as the fourth player given his part breaking the fourth wall in the movie itself.

The artwork is beautiful. The exterior siding of the box is done almost as a watercolor landscape, while the illustrations capture the whimsy of the original movie perfectly. With the combination of the structure of the game and the artistry, it’s a thoroughly well thought out and executed game from a design standpoint.

How to Set up Disney’s Mickey and the Beanstalk Game

The box itself forms the base of the game, which both my kids and I thought was a fantastic use of space for function. Because of this, the box provides a nice footprint for game play, and means that you can play it on any surface. Everything is well made and fits together nicely. My kids had played this through once already without me, and when we all played together they had assembled the whole thing before I had even had a chance to flip through the instructions.

Once the board is fully assembled, and you have your tokens separated by shape, you should put the Golden Harp into Willie the Giant’s lockbox, and have each player choose a character. For younger players it is definitely easier to play this on the floor so that they can see the top of the Beanstalk without having to climb over the table. We learned that the hard way, though my daughter considered it the fun way.

How to Play Disney’s Mickey and the Beanstalk Game

You start each turn and each round, with spinning. The spinner determines two different kinds of movements that can be taken on your turn. On four of the spinner spots the number shows how many spaces your character can move, while the color shows where the giant has to go, always to the nearest space on the board of that color. When you spin one of these number/color spots your character and the giant both move. There are however four spots on the spinner that don’t move the giant. Three of these will get you extra supplies, while one of them enables you to sneak up to three spaces without the giant seeing you.

You always start in the village, and climbing the beanstalk is the same as moving one space. Once you are out of the village and onto the giant’s table you don’t actually have to move the number you spin, you just have the option to move up to that number of spaces. You may not move through the Turkey.

Your personal character board has space for only three items at one time, and only one of these can ever have a key. If the giant has stolen food for his lockbox, and you are in need of that particular item for the village, you will need a key to get into his trunk. You can go to the village each time you have an item if you want to, but you can also save up to three items and make one trip. If you, as a team or an individual, have multiple of the same food item, and the village doesn’t need the item, then you mix the token back into the pile it came from once you are back at the table.

Different foods are physically different shapes, which is great for playing with little kids. They don’t need to be able to count beyond three, and they don’t need to identify the exact food needed by the village, they can just go by shape. The game is for ages four and up, and this design choice really enables the little ones to play without struggling. Which by the same token, ahem, makes it easier for older siblings to play with younger siblings without parental involvement.

There is an additional set of tokens once you have mastered the basic game, and these are the Courage tokens. In subsequent games, or not if you don’t want to, each house has a Courage Token. If you fill a house with food you get to keep the Courage token. The Courage Token can be spent in order to block the giant from stealing a piece of food, even when it’s not your turn. But you must have already returned up the Beanstalk. It’s easy to have courage when you are still in the valley, but you need a token once you are back with the giant.

How to Win Disney’s Mickey and the Beanstalk Game

The Golden Harp needs to be in Happy Valley in order to win, but this is not a selfish game, you need to have fed the village as well. Through cooperative play you have worked together to bring both food and the harp back to Happy Valley. When the harp is back and all the houses are fed, the game ends and you win.

If, however, Willie the giant fills his lock box before you succeed, then Willie wins and everyone else loses. Poor villagers. 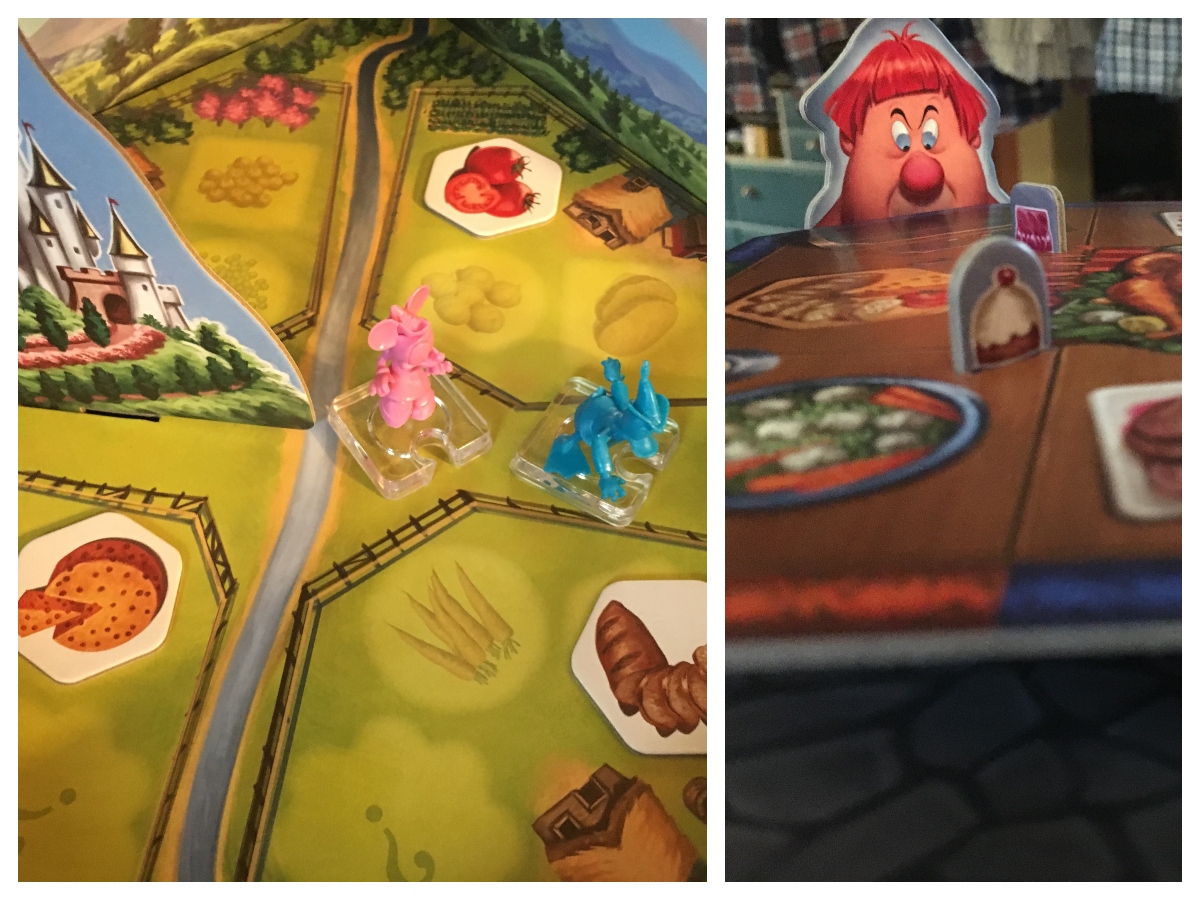 Should I buy Disney’s Mickey and the Beanstalk Game

My rule is always to buy the game if you are a fan of the movie, but in this case watching the movie first is not a prerequisite. Our kids couldn’t remember seeing this when they were younger and so to all intents and purposes played the game before watching Fun and Fancy Free, they seemed to enjoy the movie that much more for previous exposure to the stories through the game. It’s a fun game to set up, and a fun game to play. We are getting to that age range with our kids where our twelve year old is easily frustrated by his younger siblings and how they choose to play games. This game is certainly on the cusp of too much frustration for him. But the younger kids absolutely adored it. With tokens in play, learning to collect different kinds of food, navigating a fairly passive ‘enemy,” this is a great pre-school introduction to some of the techniques you will need in their older board game playing years.

‘The Friendship Experiment’ Is a Geek’s Guide to Middle School