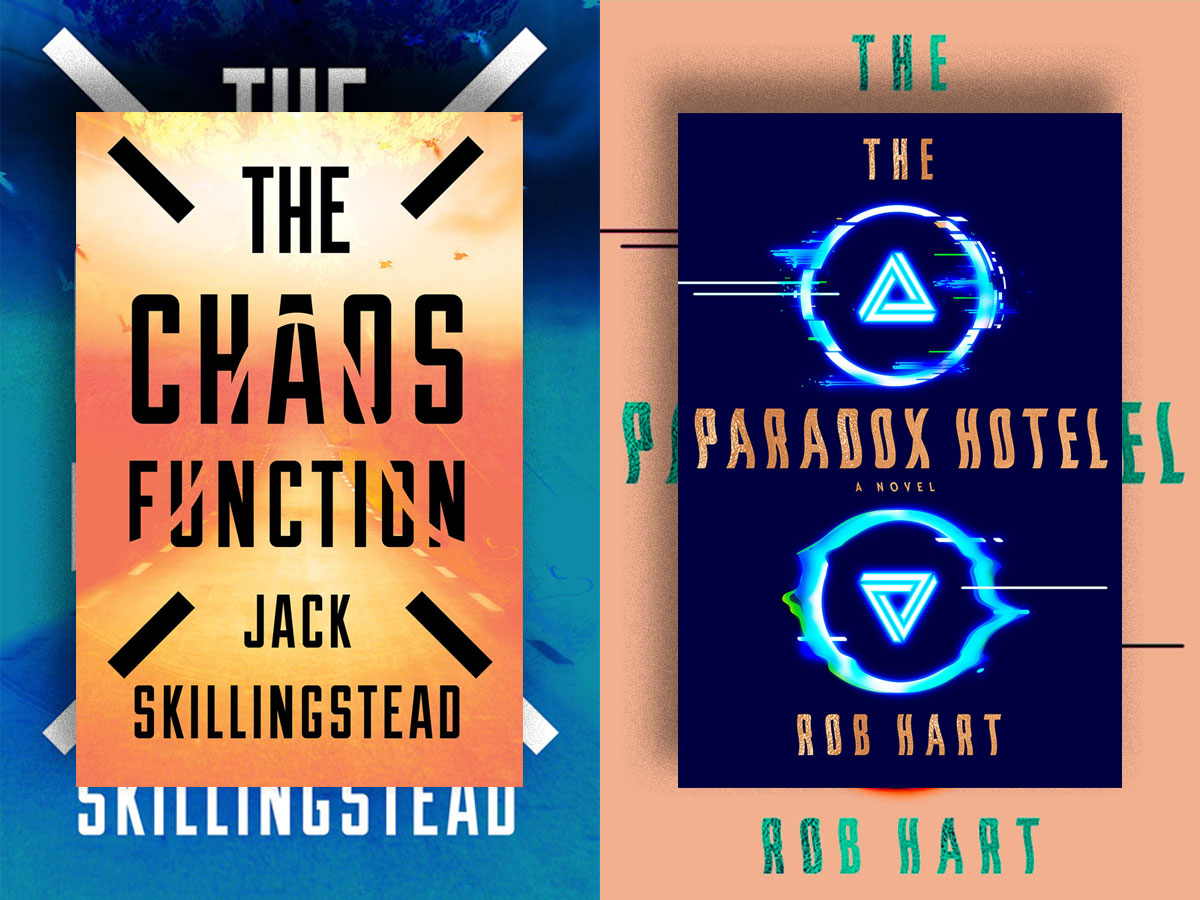 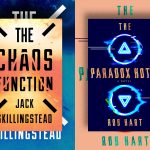 Last week I wrote about a book where the main character jumped back and forth along her own timeline, living her life out of order. This week I read two more novels both featuring characters with different difficulties staying in the present, though for different reasons. It occurred to me that, although I live my life in order, I have a hard time reading books at the “right” time. By that I mean, ideally I would be telling you about a book close to its release date: you’d get to read about a hot new title, and I’ve heard that the author and publisher benefit the most from the sales (and pre-orders) right at release. But too often I don’t get to a book until it’s been out for a while; at other times I’ve read a book that won’t be out for several months, so it seems weird to talk about it. For instance, while you might be complaining that it was too early for stores to start selling Christmas decorations before Halloween, I’m getting pitches now for Valentine’s Day titles. I may not ever actually time travel, but sometimes it’s fun feeling like I’m peeking into the future.

So, with that, I present two more books from my time travel(ish) shelf. 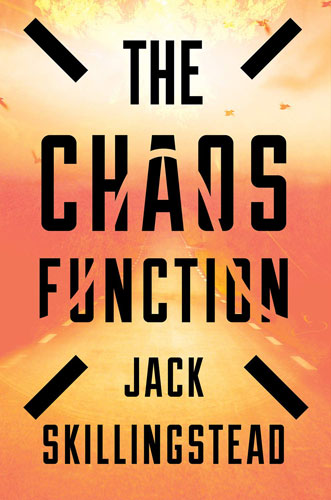 The Chaos Function by Jack Skillingstead

This book, originally published in 2019, takes place a few years in the future—close enough that the world is still recognizable (though, of course, it hasn’t been ravaged by COVID) but just far enough out to allow for some predictions. For instance, the civil war in Syria has ended … but it’s not really over. It’s an uneasy truce, and fighting still breaks out from time to time. Olivia Nikitas is a journalist and she’s been stationed in Aleppo, where she started dating an aid worker named Brian despite her usual policy not to commit to relationships. While following a lead on a story, Olivia and Brian get caught in some crossfire, with disastrous results.

But then something weird happens, and they make it back to Seattle, though she finds herself with two sets of memories—the doctors chalk it up to a potential concussion, or maybe stress-induced hallucinations. Olivia’s not entirely convinced. And that’s when she gets kidnapped and taken to a remote ranch by a group calling themselves the Society, spouting some bizarre nonsense about a probability machine, Shepherds, and a mission to save the world. Apparently Olivia has unintentionally inherited this power, and the patriarchal elders are not happy about it. Oh, and she’s also doomed the world, or so they say. What follows is Olivia’s attempts to learn how to use this ability to put the world back in order, all while staying out of the clutches of the Society, which has its own ongoing civil war. Each attempt seems to make it worse: bioweapons, nuclear war.

The way that the machine works isn’t exactly time travel, but each time Olivia uses it, she finds herself in a different timeline—a different probability—though everyone else around her only remembers the events that caused the current state of the world. (One version of the world that stuck out in particular involved a pandemic—though it seemed like mask compliance was nearly universal in the book, which seems like wishful thinking now that we’ve witnessed an actual pandemic.)

The main weakness I saw was the way Olivia was portrayed, particularly the way her relationship with Brian is described from her point of view: she’s in love, but reluctantly. It’s as if the author thinks a woman who doesn’t want to get into a serious relationship just hasn’t met the right guy yet … or perhaps one who is persistent enough. Since her relationship with Brian does play an important role in the timeline-changing plot, I think I would have enjoyed the book more if that didn’t bug me as much. Still, I enjoyed the action and the way that we gradually learn more about the Society and the machine, and it’s an interesting twist on conspiracy theories about a shadowy cabal that pulls the strings. 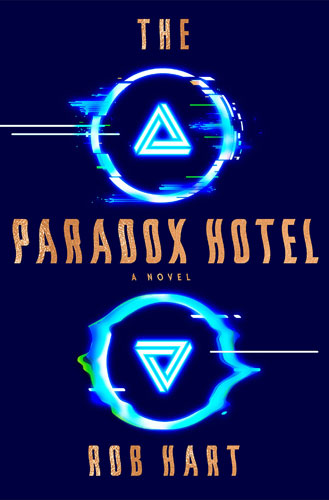 The Paradox Hotel by Rob Hart

This title involves actual time travel—and it’s also from the future itself! It’ll be published in February 2022, though you can pre-order it now. Rob Hart is also the author of The Warehouse, which I read back in 2019 and really enjoyed, so I was excited to see his take on time travel. January Cole is the head of security at the Paradox Hotel, where the extremely wealthy stay when they’re traveling through time at the nearby timeport to watch the first performance of Hamlet, take a trip on the Titanic, that sort of thing. Because time travel (to the past, at least) exists, but it’s still out of reach for all but the obscenely rich. And, since the hotel and timeport have been losing money, the government (which runs the Time Enforcement Agency) is putting it up for sale. The buyers (including an obnoxious tech CEO and a Saudi prince) are all arriving to meet with Senator Drucker, who’s in charge of the TEA’s budget.

Unfortunately, this summit couldn’t be happening at a worse time. There’s an impending snowstorm threatening, not to mention some anomalies have shut down the timeport and canceled flights—which means the hotel is at capacity, and billionaires aren’t very pleasant when they have to wait. Oh, and January has another personal problem: she’s Unstuck.

January used to work as a TEA agent (basically a time cop), and the time radiation exposure has resulted in a brain condition: her brain becomes unmoored from the timeline, which means that she experiences ghosts from her past and future. She sees and hears things that aren’t actually there, and has to piece together what may be an echo, and what might be a preview of something that may be happening later. When a mysterious figure turns up dead in one of the hotel rooms—but January is the only one who can see the body—it’s clear that somebody is trying to interfere with the sale, and it’s up to her to figure it out.

It was hard for me not to picture the Paradox Hotel looking like the TVA from the Loki television series, and the TEA definitely had some parallels, chasing down people who messed with the timeline. It’s a whodunnit with an unreliable narrator: if she can’t even trust her eyes, how can you? January is also struggling with grief (her girlfriend Mena died, though it takes some time before you finally piece together the story of what happened) but her grief is parked in the “anger” stage, as she constantly takes it out on all of her co-workers and even her AI drone, Ruby. Although the plot of the book is primarily focused on the mystery, the way that January processes her emotions is also an important element of the story.

This one really captivated me—although the time travel tourism is mostly adjacent to the plot, January’s own jumping around in time was its own form of time travel, and the way that the various anomalies start affecting the hotel was fascinating. I also liked the way that her visions of the future worked as foreshadowing, giving hints about what was coming later but still keeping me guessing. If you enjoy time travel and mystery thrillers, this one’s worth a read.

With Thanksgiving this week (and my kids home from school all week) I’m not sure how much reading time I’ll get, but I’ve poked my nose into a few books and will probably settle on one to finish: The Anomaly by Hervé Le Tellier and Light from Uncommon Stars by Ryka Aoki. Oh, and since I clearly don’t have enough on my reading list, I’ve also been flipping through Bibliophile: Diverse Spines by Jamise Harper and Jane Mount, a book about books, most of which I haven’t read yet but will probably want to. Against all probability, all three are current releases!

Hope you have a happy Thanksgiving! Be careful if you’re traveling, and stay safe if you’re gathering.

Disclosure: I received review copies of these titles. Affiliate links to Bookshop.org help support my writing and independent bookstores.

Click through to read all of “Stack Overflow: Back and Forth” at GeekDad.If you value content from GeekDad, please support us via Patreon or use this link to shop at Amazon. Thanks!

An Exquisite Look at the World of Kokeshi

7 Things to Know About ‘7 Wonders’—Late to the Party