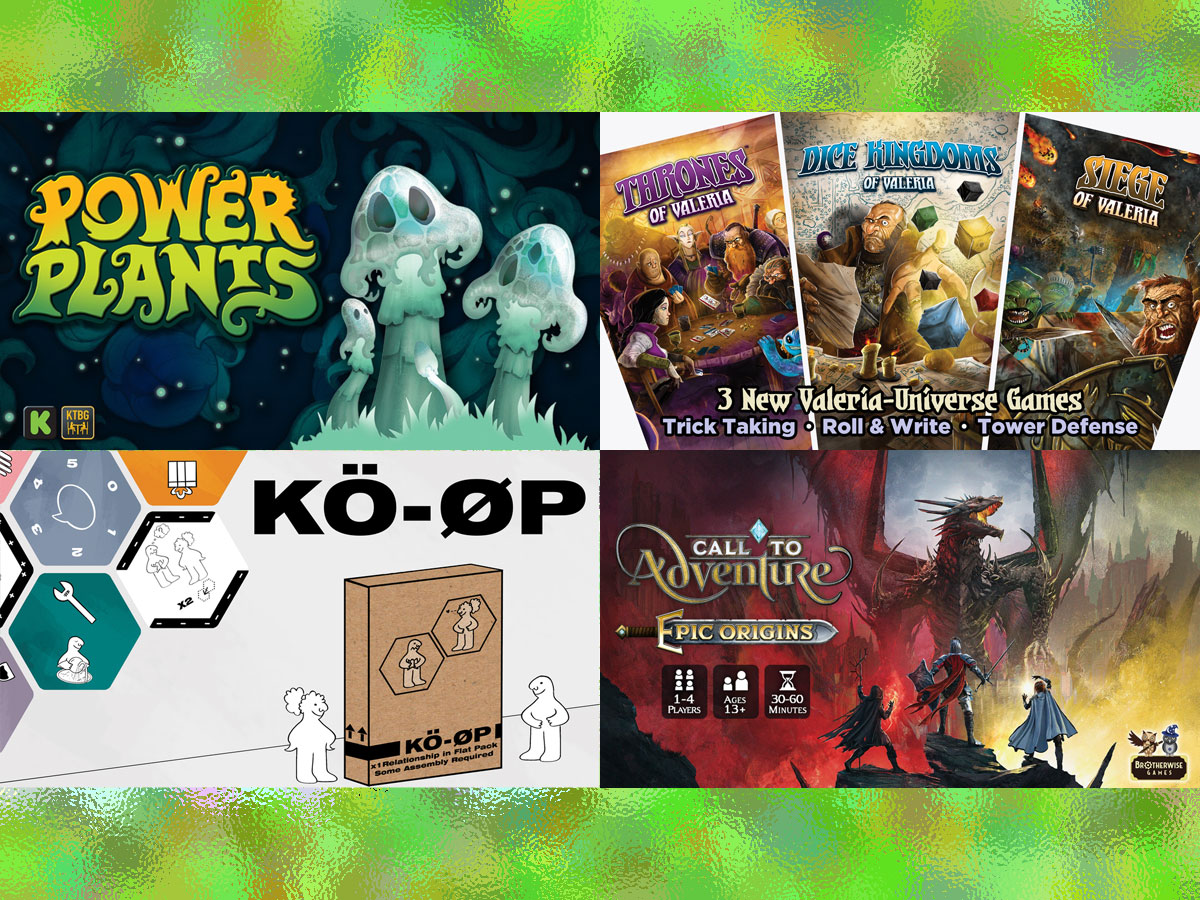 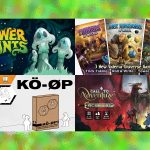 Quite often with my Kickstarter roundups, I haven’t gotten to play the games myself—they’ve just caught my eye for one reason or another. Today’s picks are games that I’ve gotten to try at least some version of (mostly with digital prototypes, times being what they are) and have enjoyed playing.

Power Plants is a nifty area-control game: you take turns “planting” hexagonal tiles on the edge of a growing garden, and using your sprites to hold positions for points. But each type of plant has a sprout power that can be triggered when you plant it—or, you can instead trigger the grow power for each existing plant adjacent to it. With five different plants in play each game (from a list that’s currently up to 15), there are all sorts of fascinating combos to figure out. I’ve gotten to play a prototype version of this on Tabletop Simulator and enjoyed it. It reminds me a little of Hive in the way the board is basically formed by the pieces, though in this case you don’t move the plants themselves around.

Kids Table Board Gaming publishes games that are kid-friendly and have eye-catching, colorful artwork, but enough depth to them that the parents won’t get bored (and may even break them out after the kids go to bed). Power Plants looks to be another solid title in their line-up. This is the last day of the campaign, so check it out soon if you’re interested!

Daily Magic Games continues to expand the world of Valeria, this time with three smaller titles. Thrones of Valeria is a trick-taking game with ranked suits (think of it as multiple levels of trump suits), and the cards you play can manipulate the ranking—as well as the rewards earned for the winner of the trick. Dice Kingdoms of Valeria is a roll-and-write game that echoes the original game, Card Kingdoms of Valeria: the dice will activate everyone’s character abilities, generating gold and strength and magic, which you spend to recruit more characters, fight off monsters, and expand your kingdoms. There are some new twists, too, like traveling along paths to unlock domains, giving you the ability to affect dice rolls. Finally, Siege of Valeria is a solo tower defense game, with waves of monsters and siege engines attacking your castle.

I’ve tried Thrones and Dice Kingdoms on Tabletop Simulator a few times, though I’m not as much of a solo gamer so I hadn’t gotten to Siege yet. They’re all available to try for free as Print and Play versions and Tabletop Simulator mods, so you can give them a shot yourself!

If you’ve ever assembled a Kallax shelf for your board games, then you’ll recognize the inspiration for this 2-player cooperative game. KÖ-ØP is about assembling flat-pack furniture with your partner trying to save your floundering relationship. The cards are double-sided: one side represents the furniture pieces, which can only be assembled in particular configurations; the other represents the relationship needs that using that component fulfills. As you work to put together furniture with names like HÖNSTEE and KØEMFÜRT, you’ll also try to communicate your relationship needs … though never explicitly, of course.

I got to try KÖ-ØP on Tabletopia, though that medium had some limitations that would be much easier with the physical version (like simply holding a card so that you and your partner are looking at opposite sides of it). There’s a lot of really fun humor in the game, from the IKEA-esque drawings to calculating the score in meatballs. May your relationship hold together well after your furniture falls to pieces.

While I haven’t played this latest version, I have played the original Call to Adventure game. Over the course of the game, each player adds to their character’s story, developing traits and facing challenges, in the hopes of achieving their secret destiny. The game uses runes instead of dice for the challenges, and the whole group must also defeat the adversary together or nobody wins. Epic Origins is a stand-alone version that can be combined with the original, and it adds classic fantasy races and classes, along with a conversion guide so that you can take the character from your finished game and use it in a D&D 5E adventure!

Click through to read all of “Kickstarter Tabletop Roundup: 4 Personal Picks” at GeekDad.If you value content from GeekDad, please support us via Patreon or use this link to shop at Amazon. Thanks!

I Help – A Toddler’s View of Cleaning