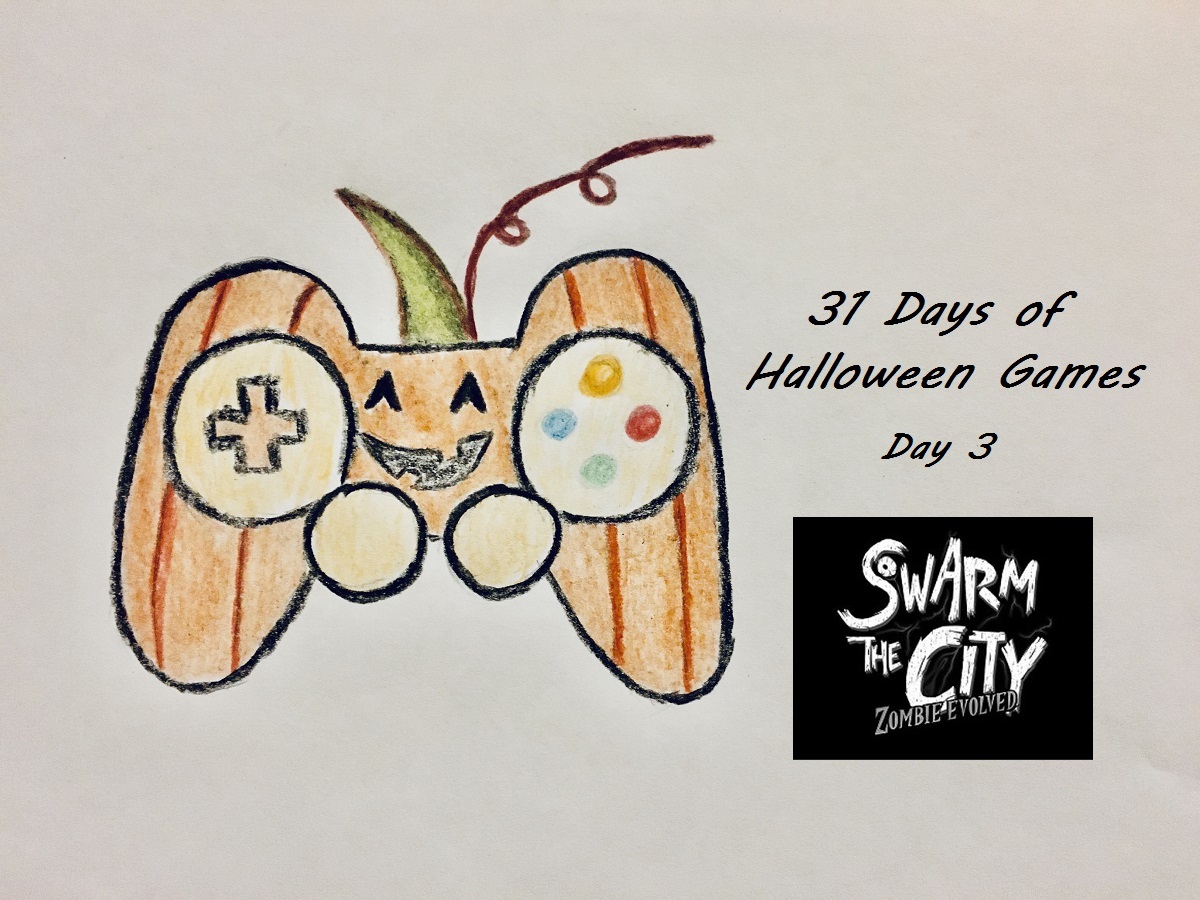 Halloween is no time to drag your feet. Here’s your opportunity to impress the Zombie King with your strategy skills and build the ultimate zombie army. Swarm the City twists the usual zombie apocalypse games and puts you in the control seat for destroying the world—not saving it. Are you ready to plunge the world into chaos and darkness? Good. It’s Day 3 of our 31 Days of Halloween Gaming. And we have a zombie army to build.

What Is Swarm the City?

Swarm the City is a casual real-time-strategy (RTS) zombie game, except now YOU are fighting on the side of darkness. Give up your mundane human lives and embrace the power of the King of Zombies! Your role is to infect as many humans as possible, build a zombie army, and take over the world. This will require brains. Lots of them. It would appear “taking over the world” requires more thinking and strategy than I had originally anticipated.

Thousands of years ago, Karre the Great raised a dark army of zombies to take over the world. The humans defeated him and sealed him away in a sarcophagus beneath the base of St Maria Church. However, the chaos of the human world and the destruction of the land has released Karre. This time, he has enlisted you to control the army. The more humans you infect, the greater the swarm of zombies with stronger powers to unlock.

Swarm the City features 20 separate city locations as levels for the game. Each location requires a different strategy in approach. Start in the cemetery and collect zombies on the way to nearby houses. Move into town and infect the shopping mall before you attack the police station.

The style of game is similar to other RTS games, such as Command and Conquer and League of Legends. There are no bases or resources to build (in fact, you need to destroy buildings to control the humans’ defense). Instead, you are controlling the zombies on the ground. Initially, one. Then four. Then a swarm of 50. As your numbers grow, you can also unlock generals with special skills to advance the swarm.

There is an interesting mechanic in the game which will change your entire gameplay: certain powers within the swarm require you to power up first. I quickly learned it was better to infect a few groups and collect as many fresh zombies (can I call them that?) before bringing in the heavy hitters. This way, the generals are powered up faster before you unleash the Fire General on the fenced buildings.

The game includes some guidance for the initial stages of play, but I would love to have seen more tips to understand the skill tree. Each General you unlock comes with its own skill tree and special powers. At the end of each level, you gain points to enhance certain skills. I struggled to understand how to use these as I progressed and ended up relying heavily on one or two faves (Fire General all the way). Gamers with more RTS experience will handle this better, but it can be a real deterrent for anyone trying out RTS for the first time.

Watch Over the Hordes

Visually, Swarm the City has very clever 2D graphics with enough detail on the map to fill it out. Wide angles across the map and a deep birds-eye view make the game feel bigger than it is—in a good way! It is even better when your swarm of zombies grows into a huge clump of undead filling the streets. 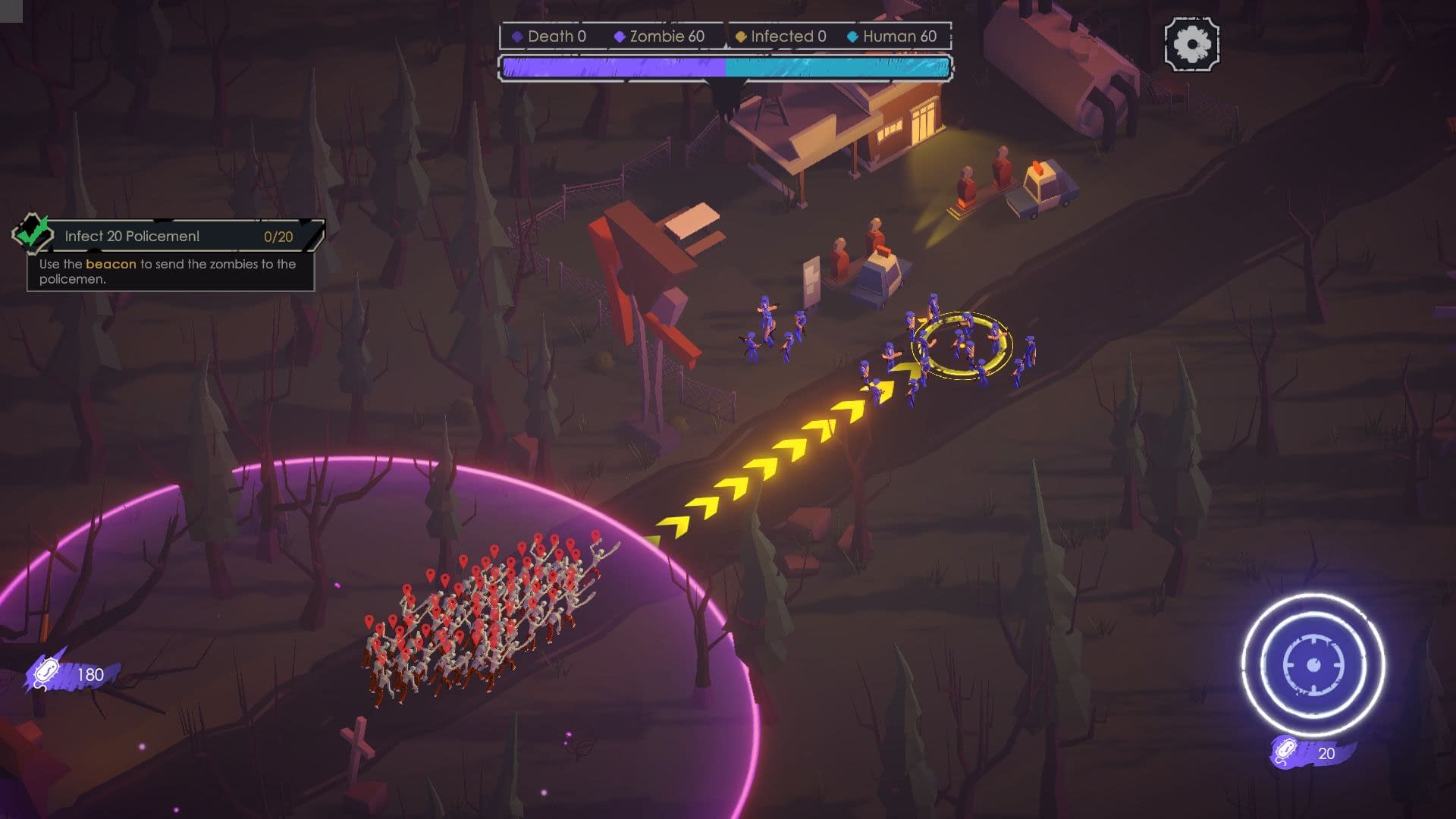 There are moments when the game has a mobile-game feel to it. The menu and power options have big clear graphics, making it easy to navigate and less likely to fumble mistakes—something I really appreciate. At this point, Swarm the City has been developed for PC and I have not heard any news about it being a mobile game. If the developers were to go down this path, there would need to be enhanced detail for the zombies in the city. Right now, they are the perfect size for playing on a larger screen.

A Win for the Undead

At the time of publishing this article, Swarm the City has a free demo available on Steam with Early Access scheduled within the next few weeks (the full title is Swarm the City: Zombie Evolved). The demo includes five (5) levels across Chapter 1 and part of Chapter 2. While it is short and sweet, it is the perfect opportunity to gain a taste of RTS games and how fast they can be! The complete game is said to have all five (5) chapters with a complete story arc. I’m quite eager to see how that plays out since the prologue was well-written and entertaining.

I have to admit, I’m not a big fan of RTS games usually. However, I enjoyed the premise of this game. I also liked the focus on the characters and swarm, without the distraction of building resources as well. This is not a straight-out destruction game based on numbers. There is a need for strategy and understanding of your power base. The visuals are entertaining and the sounds effects are well-suited to the gameplay. It’s a game I’m happy to share with my 10-year-old son who loves building skill trees to combat foes.

Swarm the City is currently available on Steam. Evil Genius Mum received a free copy of the demo for the purpose of this review; no other compensation was received.

Score: 3 out of 5 Zombie bites

Escaping Into a Loop-the-Loop World of Fantasy