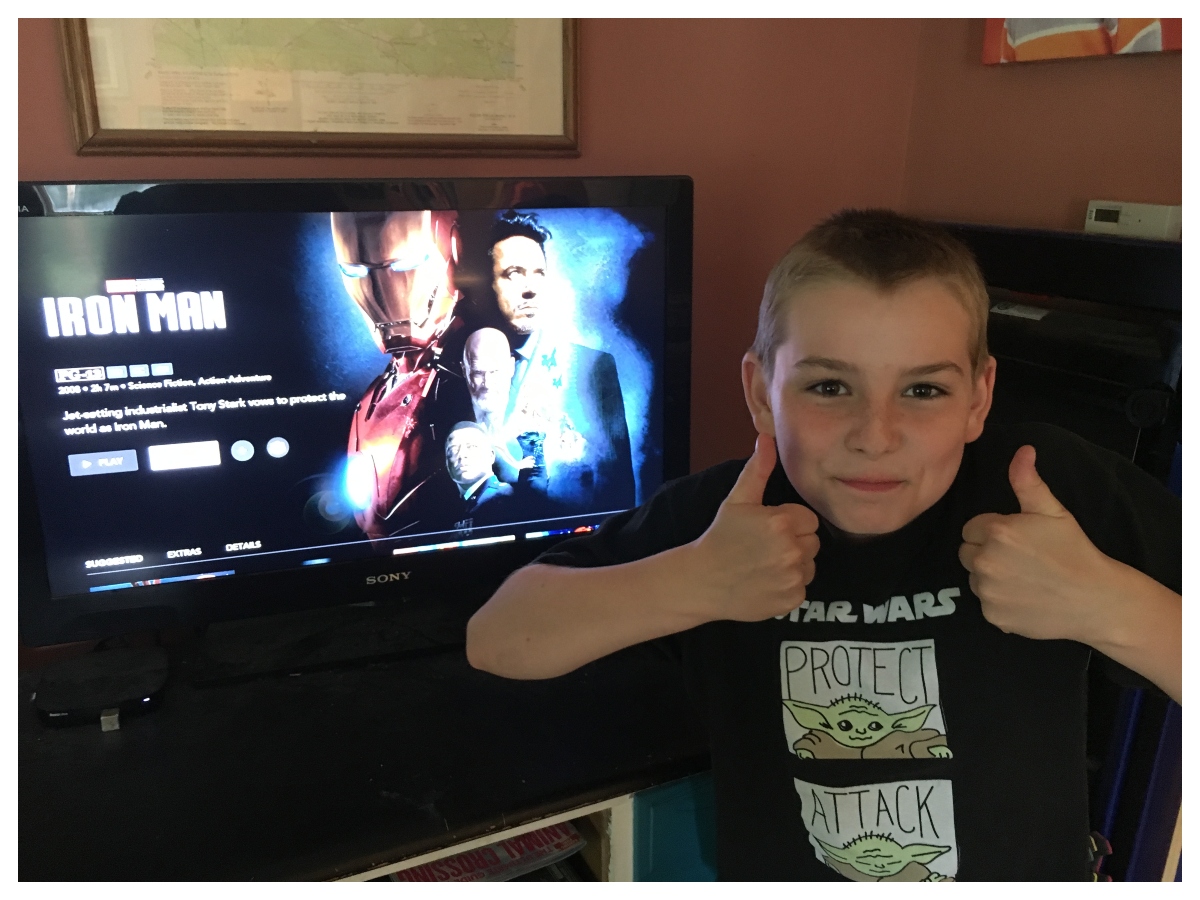 He’s read all the Scholastic young reader books. He’s seen cartoon versions from the 80s and 90s. He even watched Captain Marvel with me last year when he walked through the room and got sucked into the story. We’re going for one more summer of keeping pretty much to ourselves, and so on our summer bucket list this year; watching the entire MCU with my eleven year old.

We started on a Monday with Iron Man, and were up to The Avengers, (minus The Incredible Hulk) and exhausted, by Friday. At a very young 11, even though he turns 12 in two months, we were worried about some of the seedier aspects of, well of Tony Stark, but we were pleasantly surprised, and learned some valuable lessons during Phase One.

Kids love Iron Man. When all is said and done, despite my exposing him to Norse mythology, Greek mythology, Scandinavian folk tales, in an attempt to win him over to the Thor side, he still loves Iron Man best of all. He didn’t notice the innuendo, he didn’t notice the overnight occupations of Mr Stark, though he did comment on the yucky kissing. He liked how smart Tony was. He liked that Tony started being smart as a kid and never stopped. He liked that Tony had a kick ass basement full of robots and cars. He loved the restorative arc of the weapons dealer who learns what really happens in the world. It’s such a kid approach to the world’s problems; weapons cause death and destruction, let’s stop making weapons.

We, that is the societal we, don’t teach enough history early enough. When we watched Captain America: The First Avenger I had to pause many times to explain certain things about World War II. This is where I find a disconnect between my UK based education and that of my kids growing up in the US. My local high school growing up still has a bomb shelter under the stage in the gym. When I did a project on World War II, my grandma gave me her ration book and identification cards, I talked to my Great Uncle about digging for victory. My husband tells a different story about learning about the war, mostly about glory and victory. We’ve known it was there, but a movie set during the war exposed the raw gaps. So now we mull over how to fill this hole, some Jon Green perhaps, some podcasts. After the past year we are all pretty adept at sneaking education into the empty spaces.

He identified most with young Steve Rogers, before the transformation. Just a skinny kid with a good heart. Although, I will add a caveat to that as we haven’t seen Peter Parker yet. When Steve throws himself on the not-so-live grenade during training, my son was leaping up and down exclaiming “That’s why he’s a Superhero!” Also, I think he has a little crush on Peggy Carter in her red suit, but then who doesn’t.

He enjoys looking at the differences between the superheroes. Who is just a human with excellent skills, and who is a superhuman or god? Which is better? Why do we think that? We had some really interesting conversations about why Black Widow kicks more butt than given credit for, and how Tony was brilliant yes, but also maybe less skilled than others without his suit on to protect him.

He knows enough about the surrounding Marvel universe to laugh when Loki dies and ask “Okay, but is this the one where Loki really dies, or just the first time he dies?” To see Loki as a bad guy, but then also see him as an opportunist who also really loves his mom. Man I love this kid.

There is not nearly as much language, cursing, swearing, cussing, blue or otherwise, in these movies than my memory ascribes. A lot of the more adult themes go over his head. In short, there is less to concern me as a parent of a very impressionable sixth grader than I thought when I started to re-watch these with him. He is also more astute than a lot of adults I know, in that he is very aware of what is real life and what is fiction.

We are out of Phase One now and entering Phase Two. I don’t think there is a movie left that is under two hours long. So we learned some practical lessons too. We need to plan better. He stays up later than his younger siblings anyway, but even factoring that in, he still stays up pretty late on a Marvel night. He was so excited during Phase One that we watched one every night until we hit The Avengers. His exhaustion at the end of this is definitely a lesson learned the hard way. Rarely will we see a consecutive movie night, and certainly we need to start planning way ahead of story time with the littles on the night of if we are going to get a movie in. We may even need to book a hotel for the last two movies.

At the end of Phase One, after seeing Hulk smash things in The Avengers, after seeing the Hawk in his nest, and Thor bring the thunder, it is still the dulcet tones of Robert Downey Jr that evoke his most thoughtful responses; the Iron suit that stokes his longing for superheroes; and the quick wit of Tony Stark that has him giggling where he sits. Again, we haven’t reached Peter Parker yet.

And onto Phase Two.