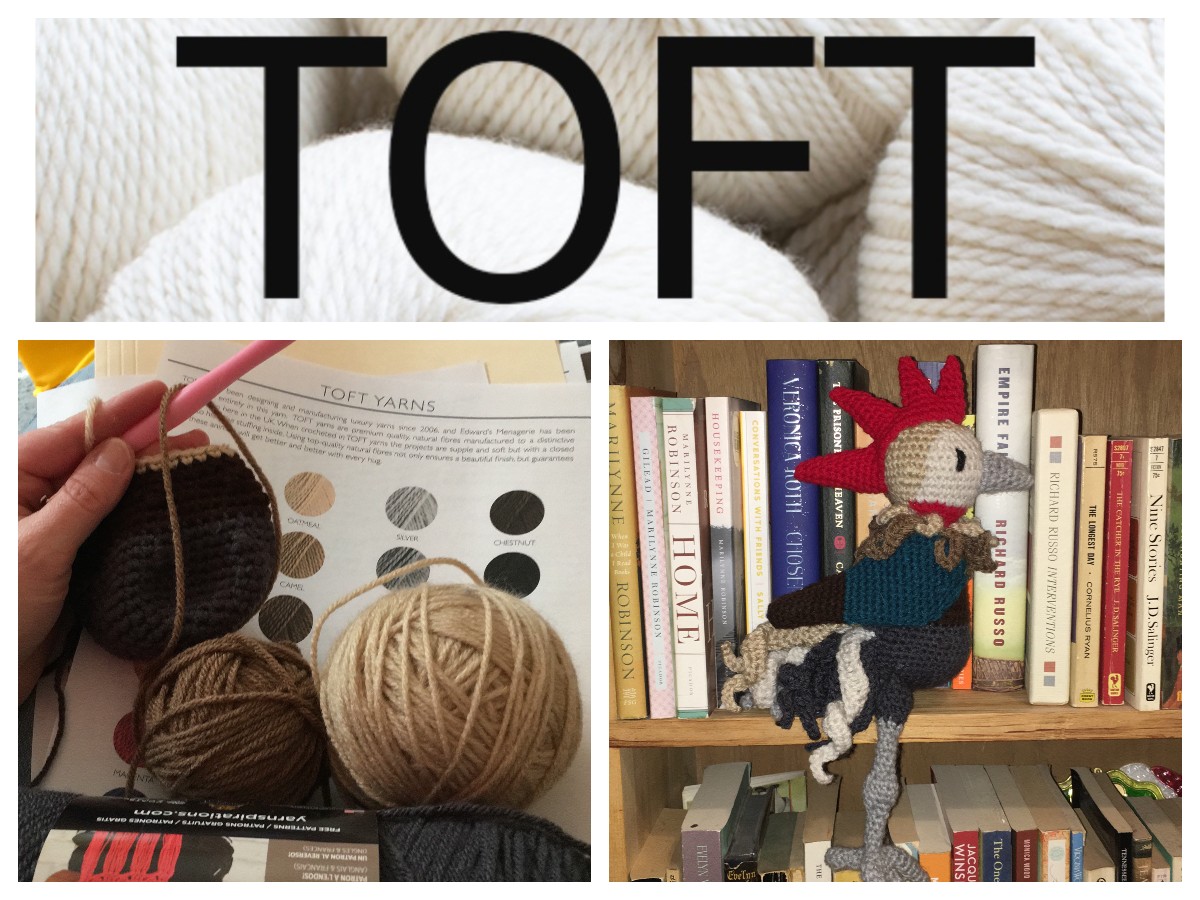 Once upon a time I was sane, and then I encountered Kerry Lord, Edward’s menagerie, and joined a whole new family of fellow crazy people; Toft addicts. Having mastered the art of the menagerie, and begun my adventures with miniatures, it seemed time to partake in something that I have avoided for years; the craft-a-long (CAL). CALs have been around as long as I have been aware of the internet. A group of like minded crafters picks, or is handed, a project, and then either together or apart they complete their craft together. Some at the some pace, some lagging behind, some racing ahead. The idea is to work on the same project and at the end of the CAL everyone has a completed craft, and the community has some fun.

I have toyed with various CALs over the years, with dress making, with scrapbooking, but none of them piqued my interest enough to take the plunge. Kerry Lord and Callahan the Yokohama Cockerel had me hooked however.

Every day for twenty days, Kerry would go live on Instagram with a play by play of the days crocheting. Some days were repeated patterns and so there was no new video, two wings, two legs, etc. For my part, crocheting along in the US, I would watch the videos at the end of the day when everyone in the UK was sleeping. This was my first bird from the Edwards Menagerie line, and I was nervous. It is a very different pattern than I am used to, with lots more detail, and many more color changes. It was nice doing it day by day. The expression may be to eat the elephant one bite at a time, but I found that by crocheting the bird one “bite” at a time I found the pattern less daunting and the new techniques easier to build on.

After four days, we had all diligently (or mostly) completed our wings, and were moving on to the head/body piece. Not having the official Toft yarn, I was cobbling together from my stash, and so have a bit of difficulty finding the right difference between Camel/Cream/Oatmeal and Silver/Shale. I got a good balance, and only needed to purchase some Charcoal. With hindsight I would have used a lighter color for the face, but then again, now that I know how fun it is to do a bird, I will probably do one in neon colors instead! Toft does provide a handy color chart with each pattern, so if you are not using their yarn, they do make it easy to find comparable shades. 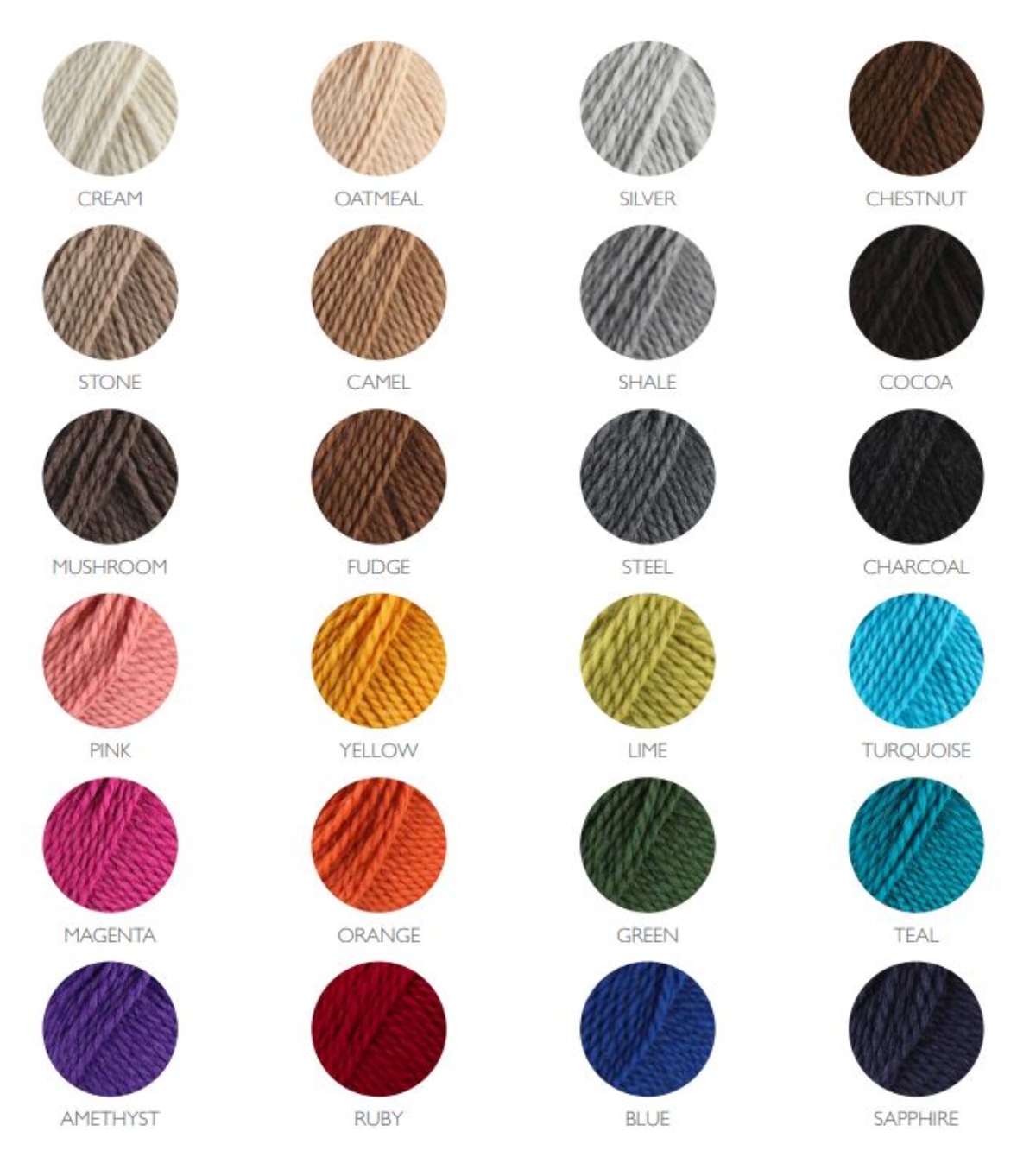 After the body, and the tremendous color changing of CAL’s face came the legs. Everyone had taken to referring to Yokohama as a cockerel by the name of CAL, though I’m not sure if this is a typical name for an animal being done during a CAL. The legs were the part that had me most worried. The slender style, the knobbly knee, the only part I felt comfortable with was the chunky thigh meat.  Luckily I have already had a practice for crocheting small tubular style pieces. I use a large crochet hook inserted into the piece, to help keep track of where my stitches are, and help my Carpal Tunnel riddled hands to not get tired or achy. If you’ve ever thrown a project down in disgust due to size and frustration, this is the method for you. 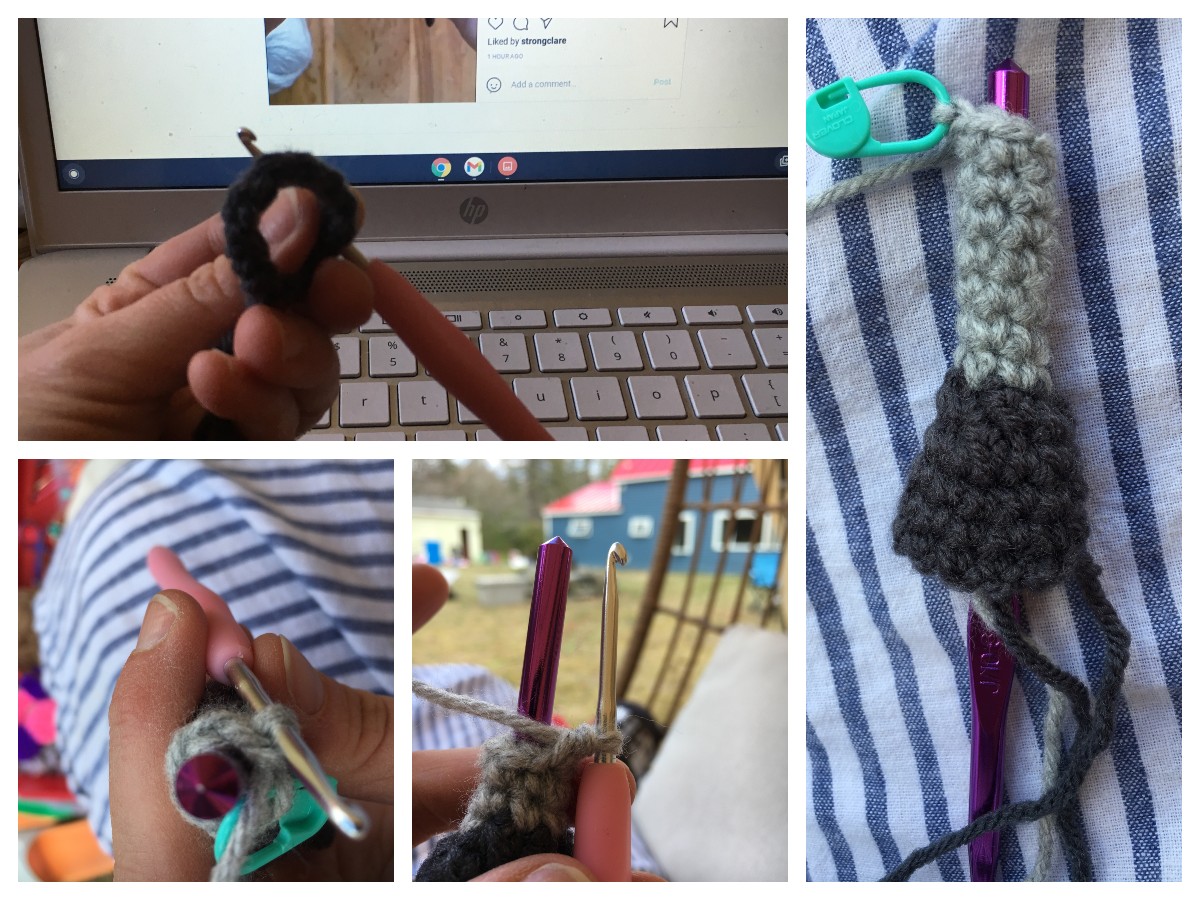 Very often I would have the videos playing on a loop while I was working. I have found that watching crochet videos can be very soothing to me, and for something I need to concentrate on, can give me focus. Focus is in short supply in my house of late. Once the first leg was done, I was officially hooked on birds. The structure of the pattern, the technique for attaching claws, everything about this was impressive and easier to learn than I had anticipated. The IGTV feed, the online videos, the support from other crafters working on the CAL. This was such a great way to learn or practice new techniques.

Everyone in my house was impressed by the first leg, two out of three children may have slept with the leg before it reached a body. 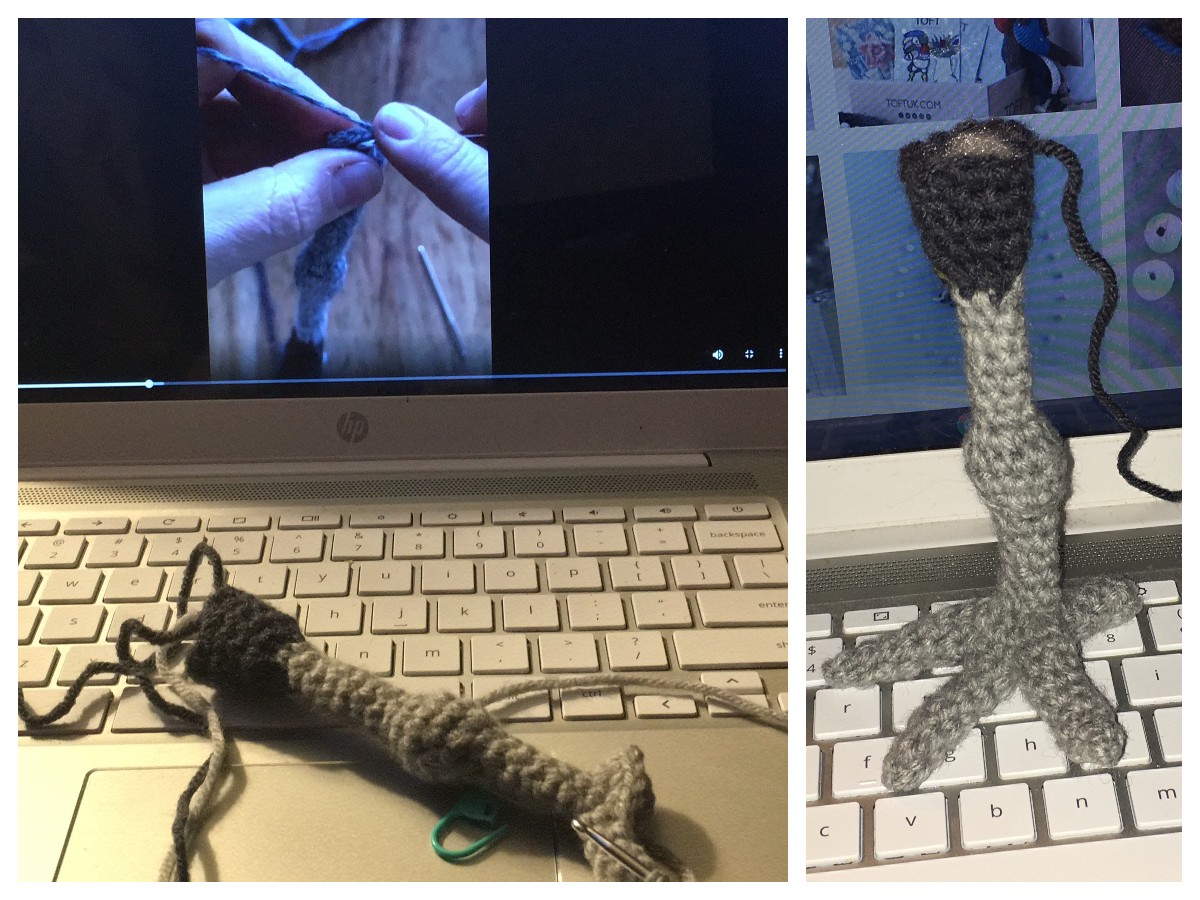 By day fifteen, we were ready to start working on the details that make this particular bird a Yokohama Cockerel. We had two wings, a body, a head, two legs with all their digits. What we didn’t have yet was pizzazz. The first color splash on the CAL came in the Crest. This may or may not have been the part that caused me to swear a little, with all the counting for joining and rejoining. However by the end I was dreaming up applications for this spiky adornment, and wishing I had this pattern ten years ago when free-styling my son’s dinosaur hat.

The beak was one of the quickest pieces to stitch up, but had me rethinking my yarn choice again. This is the point when we all began to assemble our birds, prior to adding the final feathery finesse. Kerry herself is a late stuffer. Preferring to finish up the crocheting, and stuff everything immediately prior to stitching a piece together. I personally am an on-the-go stuffer, and like to add the stuffing as I’m crocheting a piece. I usually begin stuffing shortly after starting a decrease. I find this to be easier to do than waiting till I have a six stitch hole to stuff all that stuffing into. Much like Thanksgiving, placement of the stuffing is a personal matter.

The disembodied bird looked very impressive to me, and was quick and easy to stitch together. After the stitching together you add a flash between the beak and the red chin, this is a series of big stitches in one place. You can crochet a flash if you prefer, and in some of the bird patterns I understand this is what Toft did, but I like the look and simplicity of the stitched flash myself. Toft likes to leave room for the imagination of the individual crafter, and so there are various stages here where you can add your own swagger to CAL. With  day seventeen focused on simply sewing together and creating a face, days eighteen and nineteen were to prove challenging, delightful, and provide some of the most fun crocheting I’ve done. It was time for CAL to shake his tail feathers.

Sewed directly into his butt, the tail feathers are a series of rows of stitches in single, double, and triple crochet. When layered in a variety of colors the result is simply stunning, and so much fun to play with. For my first row I stayed true to Kerry’s instructions, but I found myself changing it up a little in subsequent rows, so that I would achieve the effect I was going for. I had a feeling that my starting position was a little off, and so if I stayed true to placement, it wouldn’t look quite right. I was over the moon with the results, and can’t see why I wouldn’t add tail feather to every animal going forward. Shaking Cal’s tushy at every member of my family and singing “bend over let me see you shake your tail feathers’ brought far more delight than words can describe. Especially when dutiful little tushies shook back at me.

Day twenty arrived and with it the final piece, the wattle. The final day of any Toft CAL is meant to be watched live. You can ask questions, you get to see tips and tricks from other pieces, and you get real time commenting from crafters. It has a much more interactive feel than videos on previous days. It also airs at 10am British time. Up I got at 4.45am EST, on went the tea, and before anyone was awake in my house, I joined in with fellow Tofters around the world to finish my first CAL. 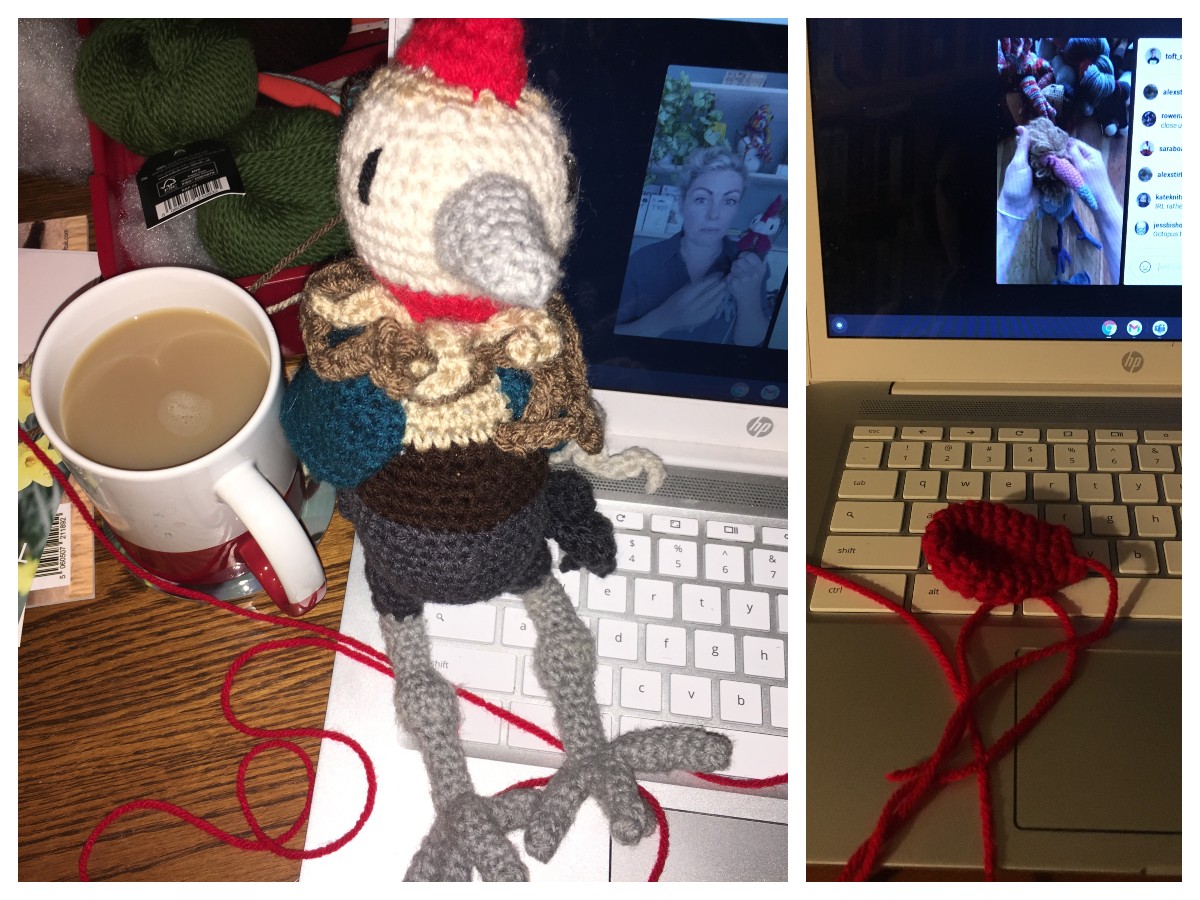 Was it worth getting up that early? Absolutely. The energy and community of the group, the enthusiasm of Kerry, it was just a wonderful way to start the day and end a project. While making the Wattle, Kerry talked about past projects, Covid related news, and answered questions from community members. By the time the Instgram live was over, so was the CAL. I thoroughly enjoyed the whole experience and would do it again in a heart beat. The family enjoyed watching my progress, and I enjoyed stalking Instagram every day for #edscallahan and seeing how everyone else’s birds were coming together. A bird is not perhaps the best starting place if you are looking to join this madcap crocheting community, but it’s a nice surprise in the middle of an obsession.

The current CAL at Toft is a knitted hat, which did not interest me, but I hear tell that the Christmas CAL is always legendary and I cannot wait. Before December comes however, whichever bird will I complete next? 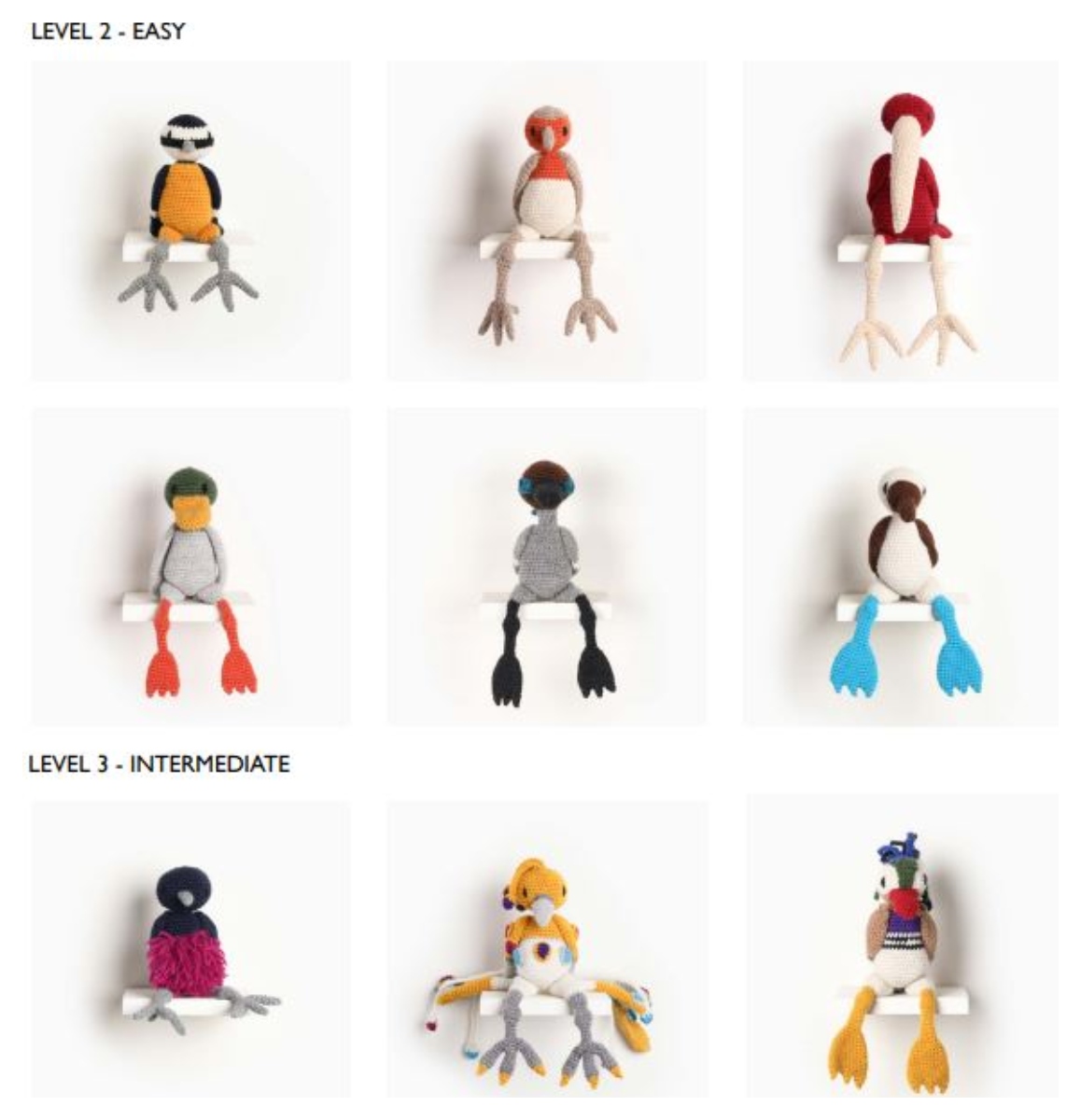 Raising Science-y Kids on the Cheap