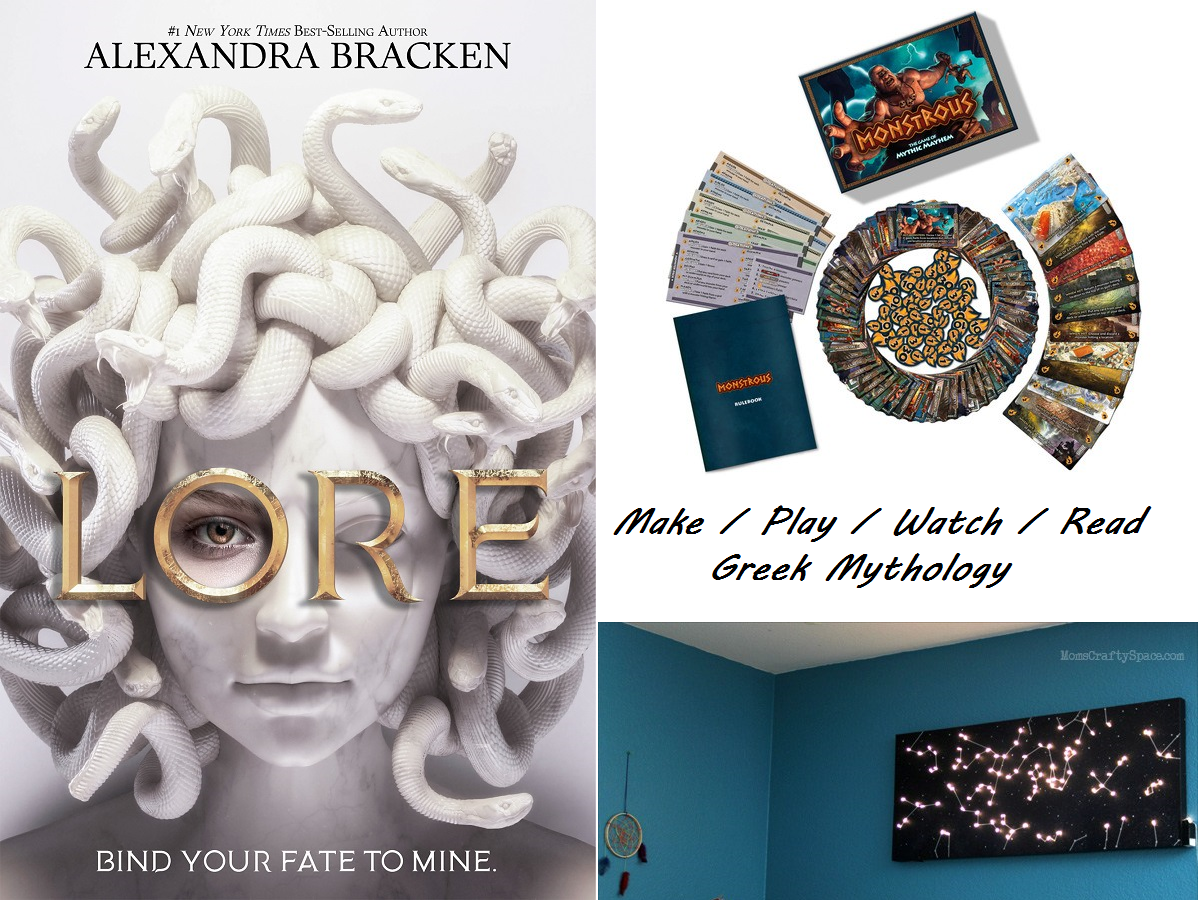 Greek mythology has been my fave topic since I was a baby Gorgon. It’s my comfort food, my bedtime story, my big cozy oversized comfy dream (more on that later). I’m not sure exactly what caught my interest but it has spawned future passions: comparative mythology, sociology, ancient art and symbolism, and the ultimate Greek tragedies. I love spotting wherever Greek myths and legends appear in pop-culture—a bit like Zeus’ children throughout history. (Keep it in your pants, Zeus.) Naturally, it turns up in our Make/Play/Watch/Read. After all, one does not simply walk past a movie or game featuring Greek mythology.

In Greek myths, the greatest respect Zeus could ever bestow on anyone was to leave them alone. However, since that often seemed nigh impossible, the second best thing was for Zeus to immortalize you as a constellation in the sky. For years upon years, western astrology has been built on the legends from Greek mythology; the easiest to spot and most widely known is Orion.

We have two star-gazers in our family, and I often find myself awake at stupid o’clock in the morning, check to see if the skies are favorable. We live in Sydney, Australia—the odds are less likely to be in our favor. To make up for the abysmal weather, I would love to have a night light of some sort with the kids’ favorite constellations, Orion and the Southern Cross. Something like this:

Credit where credit is due, I have tried to come up with my own ideas for making this same thing. None of them turns out as good as Heidi’s version on Happiness Is Homemade.

I tried a smaller version and found the fairy-lights require more space and support behind the canvas. The large version picture above works well. The smallest I could go would be about half of that. I also found the fairy lights with actual bulbs work best for pushing through the canvas, rather than the tiny button lights more readily available in our local stores.

There is so much more to do with this creative idea! You can geek it up with any superheroes or light up some Star Wars images. The options are limitless.

Be prepared for a lot of boisterous laughter with this game! It is filled to the brim with Greek myths and legends, matched with gorgeous artwork. If you ask the kids what they love the most, first and foremost will be throwing cards. By their standards, everything else is cool but how often does Mom allow throwing in the house?!

You can read my full review of the game on evilgeniusmum.com, but here is the general guide. Word of warning: You are going to need the big table for this.

The core concept is to use fear to garner faith. The mortals are losing faith in the gods, and Zeus is not yet ready to let go of his power just yet. He has ordered all of the gods (all genders) to send forth their monstrous pets and rekindle the mortals’ faith through fear.

YOU (and your fellow players) are the gods. The game is set up with various locations around the table. Players will take it in turn throwing monster cards at the locations to collect faith points. However, each location has its own bonus features and each monster has its own special powers. The game ends when you run out of monster cards. The winner is the god who has garnered the most faith from their mortals.

At face value, the game is easy to play and easy to enjoy. It is popular with the younger kids because you throw cards, and the older kids will enjoy the strategy as it builds during play. From a Greek-myth-nerd point of view, I love the relative accuracy with the monsters and locations. Finally, a game on Greek mythology that doesn’t make my eye twitch.

After last week’s suggestion for Ladyhawke, I have chosen to stay with my 1980s nostalgia and crack open Clash of the Titans. This movie is a cinematic classic with the infamous visual effects from Ray Harryhausen (previously known for Jason and the Argonauts and The 7th Voyage of Sinbad). This guy is simply amazing, especially after creating his form of stop motion model animation—“Dynamation.” Of course, his work has not aged perfectly, but it holds up in its own right as well as shining as inspiration for so many contemporary filmmakers. 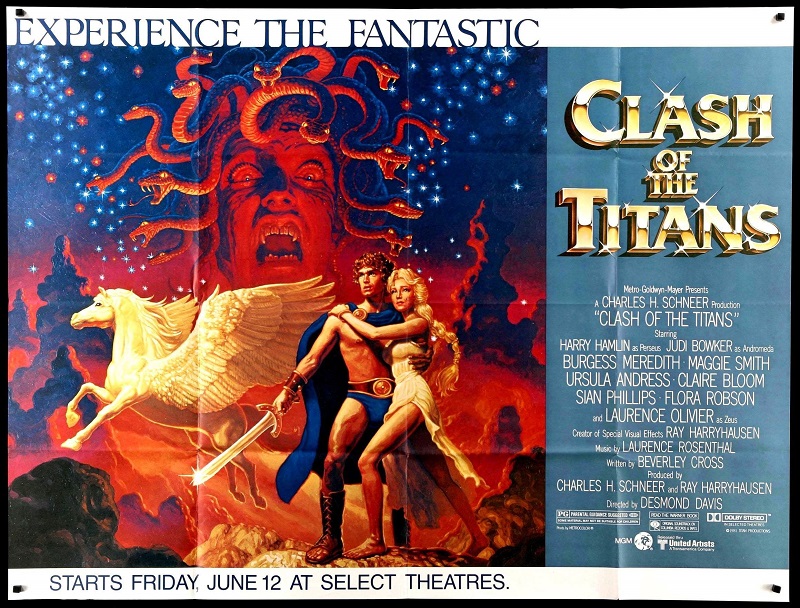 The movie is loosely based on the legend of Perseus. I say “loosely” because it is only moderately accurate with its Greek mythology. It all starts with Zeus-shenanigans and suddenly we have Perseus ready to embrace his destiny. Zeus grants Perseus a range of gifts and all of his fatherly protection but will not show the same grace to Calibos, son of Thetis (Goddess of the Ocean). Zeus transforms Calibos into a monstrous satyr-like creature as punishment for killing almost all of the sacred flying horses (seems fair). Perseus soon meets Calibos and his formerly-betrothed Andromeda, with who he naturally falls in love. Perseus subsequently takes on the challenge of breaking the curse over Andromeda’s city and being worthy of marrying Andromeda. Oh yeah, and there’s a Kraken.

Generally speaking, it’s not a bad retelling of a Greek Myth. It’s not perfect, but considering the absolute soap-opera drama of Greek mythology, Clash of the Titans is pretty good. It doesn’t overdo the relationships of Olympus but allows us to see some character in the gods. It also doesn’t shy away from Zeus being a jerk. That’s such a common element, no story should overlook it (*side-eye at Disney’s Hercules).

To be perfectly frank, this is where my love for Athena was born. And my obsession with owls. If my blacksmith skills were worthy (and they are not), I would love to make my own Bubo. If anyone knows how to, then do the thing and message me.

Special mention for the spectacular cast in this movie. While I can do without the drawn-out shots of Harry Hamlin’s bee-stung lips, I would love more screentime with younger Dame Maggie Smith as Thetis. She is all grace and charm and “not taking Zeus’ crap”—and I love it.

Released in January 2021, Lore is a new YA book on the shelves with the most amazing cover I have seen. There may come a day when I can walk past a novel featuring Greek mythology… but that day has not come yet.

Now, I could have used Percy Jackson for this section, and it would otherwise be a brilliant choice. Rick Riordan is a former school teacher with an obsession with Greek mythology (okay, all mythology). However, by now we have all read Percy Jackson and all of the spin-offs. Until the series is finally released on Disney+, I think it would be healthy for all of us to see other books, okay?

And if you are going to cheat on Percy, you may as well do it with a character like Lore. It’s short for Melora, the last of her line because some monster killed her family. Unfortunately, this violence and horrific behavior is the norm in Lore’s life; sorry, former life. Lore used to be a Hunter in a secret sub-world of Greek legends who hunt the gods.

Every seven years, nine of the Greek gods are made mortal for seven days—it is called the Agon. During this time, they are hunted by the descendants of Greek heroes who have their own historic relationship with the gods. This is all part of Zeus’ great punishment for the gods who betrayed him in an attempted uprising (read: #Zeusbeingajerk). If one of the Hunters kills a god during the Agon, the mortal will receive that god’s power and be reborn as a god. The catch is they too will be hunted during the next Agon.

There is a lot to delve into with this book. While it is set in modern New York, the sub-culture of the Agon and the Hunters is far more complex. Lore had previously escaped this world but is dragged back in when the current Agon turns personal. It’s a useful mechanic, allowing Bracken to guide us through the labyrinth of myths and legends and show us the relevance in our contemporary world.

This is definitely a YA-novel and I should warn you there is plenty of violence and trauma, as well as references to child slavery, abuse, murder, and attempted rape. None of this is gratuitous or super graphic, but it is there. I enjoyed both the pace and character development, without feeling like I was dragging myself through the blood pit. The world of Hunters is highly misogynistic and a great commentary on the value of women and power in modern society. In saying that, I am comfortable with our 11-year-old son reading Lore and engaging in the conversation.

If there is one thing I have learned over the past couple of years, it is how much we should embrace our comfort things. They are our grounding force when our world tilts slightly. Be it comfort food, comfort clothes, or comfort books, there is always something in our lives for us to hold on to. If you haven’t found yours yet, give Greek mythology a try. 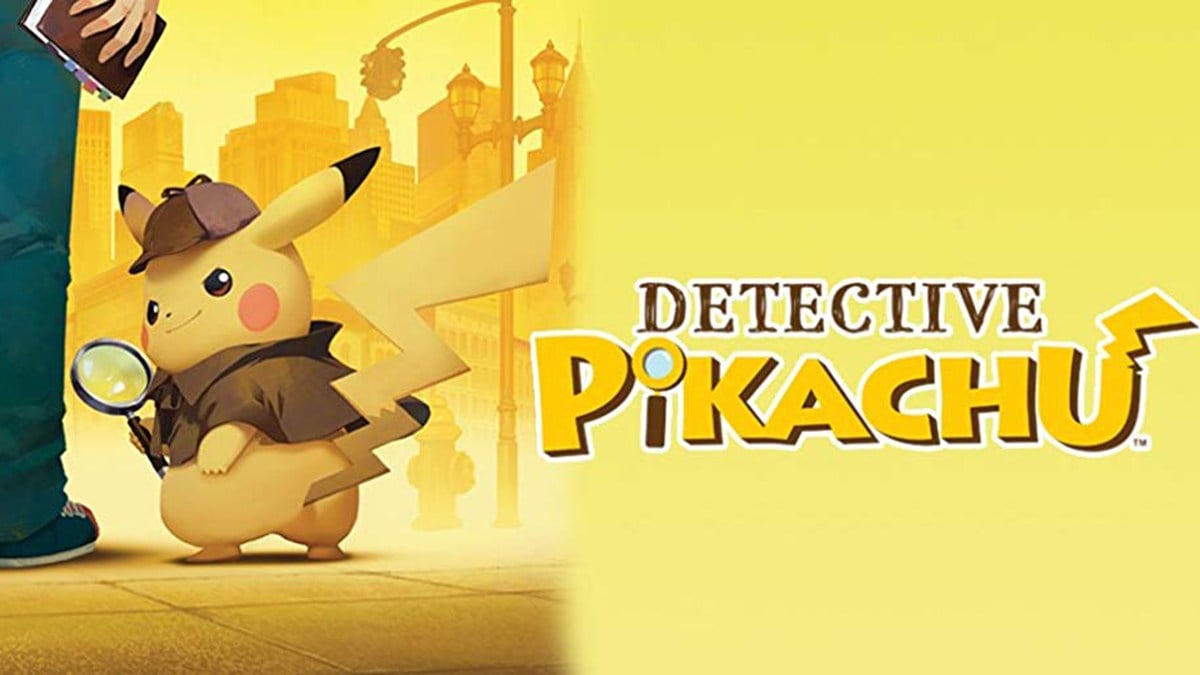