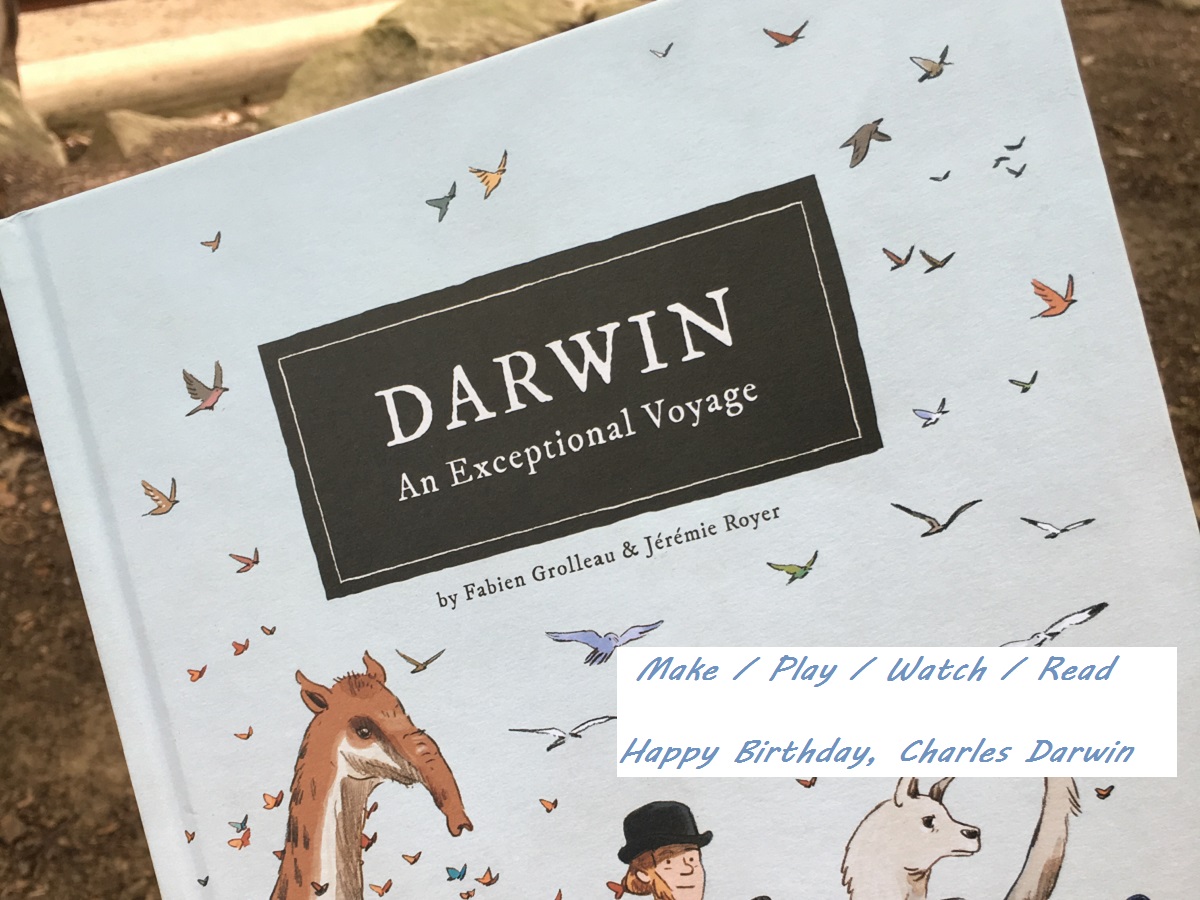 Charles Darwin is one of those names we instantly recognize. He is the father of the Theory of Evolution and a scientist in every sense of the word. The guy was an outright genius who conceptualized a theory which, in hindsight, seems pretty obvious now. And he did put the Galapagos Islands “on the map,” so to speak—much to the utter frustration of pirates throughout the area. However, there is far more to this intriguing scientist. Friday, February 12 is celebrated as Charles Darwin Day, in honor of his birthday. Thus, it seems like the perfect time to delve into the history and persona of Charles Darwin with our own Make/Play/Watch/Read session.

So, here’s a weird fact I learned about Charles Darwin. He ate some of the things he discovered while exploring the Galapagos Islands. At Cambridge, Darwin was a member of the Glutton Club, a group of fellow students interested in… uh, developing their palate beyond the standard British diet. The menu included hawk, bittern, and even a brown owl.

During his travels, Darwin continued this fascination with food and explored all of the delights offered with local cuisine. No, he did not eat directly off his dissection table. Many of the foods he tried were already part of the indigenous culture. For a place like the Galapagos Islands, the local food can be especially creative and filled with flavors not found anywhere else. Darwin would have been in his element.

For our “make,” I have found a recipe for Ceviche, a traditional dish from the Galapagos Islands. I can vouch for the authenticity thanks to my test subject, Evil Genius Dad, who traveled to the Galapagos Islands in 2019 with our eldest child. (You can read about the journey here.) EG Dad had Ceviche at least three times during his visit and LOVED it. One of the best places in the Galapagos Islands to find Ceviche is at MUYU Galapagos. MUYU is a restaurant-and-bar on San Cristobel. It is run by locals and works closely with the research center Galapagos Foundation to develop and farm indigenous food. The team is passionate about protecting the Galapagos culture and cuisine, especially with the local favorite: Ceviche.

A couple of notes about Ceviche: this is a fish dish. It’s a raw fish dish. Well, actually the fish is cooked in lime (or lemon, if you prefer) juice. Totally fine to eat and delicious. Also, I will warn you: no matter how good you make this at home, it will never be as good as the real thing in the Galapagos Islands. There is something special about their limes. They are not quite as sour as limes found on the mainland. Or this could just be another excuse from EG Dad and Sinister to go back there. Who knows? Final point: It’s pronounced “seh-vee-che,” with a Spanish influence. The local language for the Galapagos Islands is Spanish, though many people there also speak English.

Okay, now that I have used up most of my article about food (as it should be), let’s move quickly through our remaining elements. It’s time to crack out the tabletop games and mess around with Evolution.

GeekDad Jonathan is a huge fan of this game and all of its variations. You can read his extensive reviews here. Since Charles Darwin is best known for his Theory of Evolution, what better way can we celebrate his birthday than a game where we can build our own creatures based on the environment and their survival. This game is extra crazy for any biologists you may have in the family. The creations become weirder and wackier each time you play—if that’s the way you want to play it. Most of all, I love how you can have some really detailed conversations with spawnlings about the core elements of evolution and survival of species.

Watch: Charles Darwin and the Tree of Life

There have been a few movies and tv shows over the years attempting to depict the life of Charles Darwin. However, only one has come close to capturing Darwin’s exuberant passion and curiosity for natural science: Charles Darwin and the Tree of Life, from the BBC and presented by none other than Sir David Attenborough. The television documentary originally aired in February 2009 and can now be watched on Amazon.

If this isn’t enough to sate you, follow it up with David Attenborough’s Galapagos. This documentary series aired after the Tree of Life in 2013 and includes more detail on Darwin, his theory, and how the Galapagos Islands are building their conservation programs into the future.

If you are feeling confident, dive right into the thick of it and read Origin of Species by Charles Darwin himself. It’s on my to-be-read list for 2021, and top of my non-fiction books.

However, I have also found a graphic novel aimed at Darwin’s journey aboard the HMS Beagle, including his adventures in the Galapagos Islands. And it is glorious. Every page is filled with the buoyant enthusiasm and curiosity so inherent to Charles Darwin and his amazing journey to South America. It is Darwin: An Exceptional Voyage, written by Fabien Grolleau and illustrated by Jérémie Royer. You can find the book on the publisher’s website or ask at your local bookstore.

Everything about this book feels exceptional. The storytelling is like a soft weave of multiple themes coming together in a colorful yet classical tapestry at the end. It is mostly accurate with the history and characterization, though a little poetic license may appear here and there. However, it’s not meant to be a research textbook. It is a graphic novel to encourage you to learn more. It is meant to evoke your interest to learn more about Charles Darwin. It is especially powerful when countering his passion for biology with his observations on sociology. Darwin was fully against slavery and more “evolved” than many in regards to indigenous cultures (though he still had his “white man from London” moments). These core aspects of his personality and ethics are shown throughout the book and round out his history as a human being, not just a historic figure.

I also love the look and feel of this book. The illustrations are gentle with smooth lines able to convey plenty of emotion. There is little intricate detail in things like facial features, keeping things simple within the context of each page. Combine this with the overall publishing quality of the book and I feel like I have received far more value than the credit given to the creators. The book is priced around USD$25/£17/AUD$33, with a large hardcover and beautiful binding to make it feel luxurious.

Side note for parents: There are a couple of images with nudity, primarily during Darwin’s internal conflict between scientific study and the biblical stories of Adam and Eve. Nothing gratuitous nor any different from what you would see in Renaissance art, such as The Fall of Man and The Lamentation by Hugo van der Goes. However, as a precautionary note, let’s say the ideal age is 13+ with the discretion of parents (who may want to take a look at some excerpts). Personally, I have no problem with all of my spawnlings reading this, ages 7 through 14-years.

Happy Birthday, Charles Darwin! Though our gift may not be as majestic as a mountain named after you in Isla Grande de Tierra del Fuego, we can still show-off our admiration with our creative Make/Play/Watch/Read. Well done, ol’ boy! 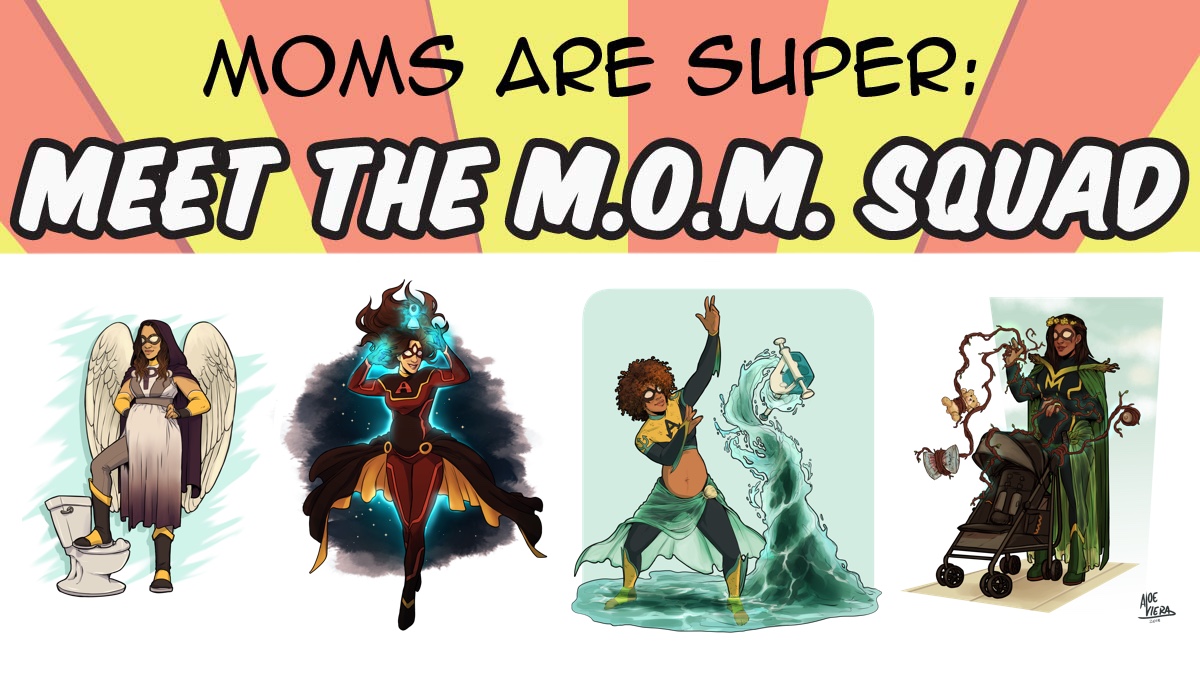