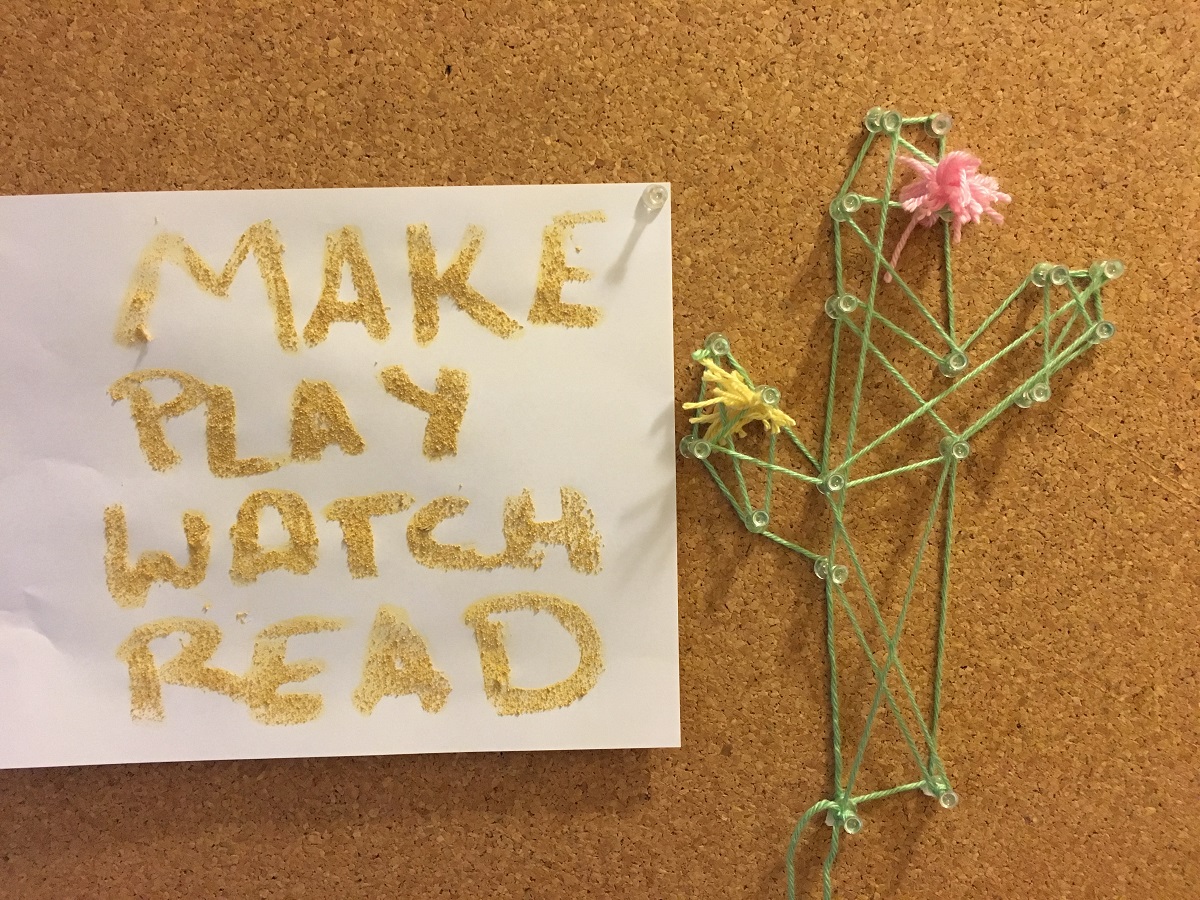 Upfront honesty on this one: I prepared this week’s Make/Play/Watch/Read solely around a boardgame. I fell in love with the desert theme and have now become obsessed with cacti and deserts ever since. Considering how much I hate the heat, my family thinks this is utterly hilarious, but I don’t care. Now, in full disclaimer, I have received no payment for this game or my review. Everything you read from here is my view and my view alone. It is up to you to decide if this is the best thing ever or if I am under the influence of high noon, low hydration, or a little too much cactus juice. Maybe it’s a bit of everything, but it’s a great ride either way! Welcome to Sonora and my obsessions with deserts.

Make: Cactus on Your Pinboard

There is no way I am making my own desert. We already have enough sand in our home, thanks to three (3) central bearded dragons who keep us as pets and food providers. Yes, I do believe they are the ones in charge.

I do, however, like cacti and succulents. Our attempts to cultivate some spikey neighbors in our garden have been less than fruitful. So, while I await the green thumb to kick in, I added a few cacti around our home instead. The most acceptable idea (as voted by my ever-patient family) was the pin-board cactus. Perfect for photos, notes, school merit awards, and business cards my husband is threatening to throw out until I reveal the Steam Code I wrote on the back. This cactus won’t die, will grow only as big as you want it to be, and can quickly be moved to wherever else you want it to be.

Now to Sonora! GeekDad Rob mentioned Sonora in a previous Re-Roll (read it here). At the time, it was sold out in many places, but the good news is they have since restocked! Personally, I fell in love with the artwork immediately. The desert theme is absolutely gorgeous and not something I was familiar with previously. Hey, I grew up on the Great Barrier Reef!

The game itself is a “flick-and-write” game. Each player flicks wooden discs across the board, divided into four distinct areas: cliffs, canyons, creek beds, and mudcracks. Each of these areas has its own mini-game with some small features crossing over to the other areas. In one area, you use your disc points to take over cliffs in the area. In canyons, you are creating Tetris-style shapes to fill out the puzzle and collect cactus. For the third mini-game, you must follow the creek beds with various destinations, points, and bonuses. The final area has mudcracks for you to fill and create mini zones for points. All of them are true to the desert theme with little details to round out the experience. You can play this game in a quick-and-easy manner or you can take some time to strategize across multiple areas.

General Details: The box says “ages 10+” but our 7-year-old Zaltu was able to pick up the basic ideas fairly easily. The hardest part for her to deal with was the overlap of one zone into another. The game is also suitable for solo play or up to four players. Between you and me, you can also modify it slightly to play up to five in a family scenario. The gameplay is in rounds and overall will give you about 30 to 45 minutes of gameplay. The physical product itself is fabulous in both look and quality. I love the commitment to wooden discs and wipe-able scoreboards. (However, the whiteboard markers included are a little too thick for my handwriting and I have supplemented them with my own.) The “flick arena” is well-contained and easy to manage on a table with the whole family.

Overall, I love the game. Building the mechanic around mini-games is such a supportive and fun way to allow the kids to manage their own style of play. Each of the spawnlings found their own strength and managed their gameplay accordingly. Even the 7-year-old was able to navigate her discs around the arena (with far more skill than me!). I am also a big fan of the solo-mode, watching the kids work on their skills in their own time as well. It adds so much playable value to the game, and for USD$30/AUD$55, it feels like a steal!

While playing Sonora and talking about deserts, 11-year-old Nefarious started talking about his favorite desert: Antarctica. Okay, so there are no cacti growing there. Nor colorful canyons or labyrinthine caves. Nevertheless, Antarctica is a desert. It does not rain or snow a lot there. When it does snow, it simply builds up over time to make large sheets of ice. Piles and piles of ice. A bit like tons and tons of sand.

Talking about Antarctica then led me to think about Snowpiercer. Both the original movie (starring Chris Evans) and the tv series (with Daveed Diggs and Jennifer Connelly) are available on Netflix. They are also based on the 1982 comic book series of the same name, though they do differ in their own retelling.

Snowpiercer is a post-apocalyptic dystopian thriller, set on a perpetual motion train racing around the world to avoid freezing. Someone came up with the idea to “chill” the world and, unfortunately, their calculations were slightly off. The world’s temperature dropped to -100 degrees Celsius (and yes, the tv series does refer to the temperature in Celsius). To survive one man designed a train to carry the last of the humans, forever circumnavigating the world until they can solve the climate problem. While they travel, the rich enjoy the full luxuries of their ticketed booths while those who fought to board the “tail” of the train will continue to fight for their right to live.

Having watched both, I can totally appreciate each in their own way. The movie was such a complete stand-out in both the heartwrenching drama and the socio-commentary. The tv series maintains the same core elements but it revolves around a murder-mystery which is subsequently tied up with power struggle and thus heavily invested in the socio-commentary of class warfare with a dash of sci-fi, climate change, and engineering thrown in for good measure. Season 2 is now available on Netflix with a weekly release of episodes. I am very happy pacing myself with this because there is so much to process in each episode. I mean, you shouldn’t gulp your water in the desert, so don’t binge all of Snowpiercer in one go.

Like Snowpiercer, this one could fit in both Watch and Read, but I personally prefer the book. This is without watching the latest interpretation, which I have not seen anything about. The book is a classic in science-fiction, filled with fantastical scenes and powerful characters.

Dune starts with Paul Atreides, heir to a noble family and happiest at home on the water planet. However, it is not his home anymore as the family is moved to Arrakis (aka Dune), a planet of sand and spice. It’s a political move and one that is part of a bigger picture filled with power struggles, murder, religion, and ecology. As Paul is abandoned to this strange world, he is forced to face the battles in both people and economics. What makes this book such a keystone in science fiction literature is Herbert’s skill in building a world—nay, a galaxy—of sociology with full, robust characters to be your guide.

There is no secrecy about Herbert’s inspiration for writing Dune. Like most sci-fi books, there is a heavy influence on the social concerns of the time; Dune was published during the 1960s when environmental concerns were front of mind, people were seeking a higher conscience, and developing countries were fighting back against imperialism. Herbert easily admitted to his fascination with the Middle East and their depiction in Dune. While there is a bit of “white savior” in our dear Paul Atreides, there is also a fair serving of respect and sincere admiration for the Fremen who have learned to live with and respect their desert homeland.

The complexity of political intrigue and social commentary can be a bit heavy going, so I would recommend this for teenagers and older. Keep a tall glass of water nearby. Herbert is skilled at setting the desert scene.

If you are as fascinated with deserts as I am, then set the scene with our Make/Play/Watch/Read for the desert. And if you live in a desert area, share your experience in the comments below. Allow me to live vicariously through you (even if only for a day)!

“The Curse of the Brimstone Contract:” A Steampunk Adventure, Chapter 15