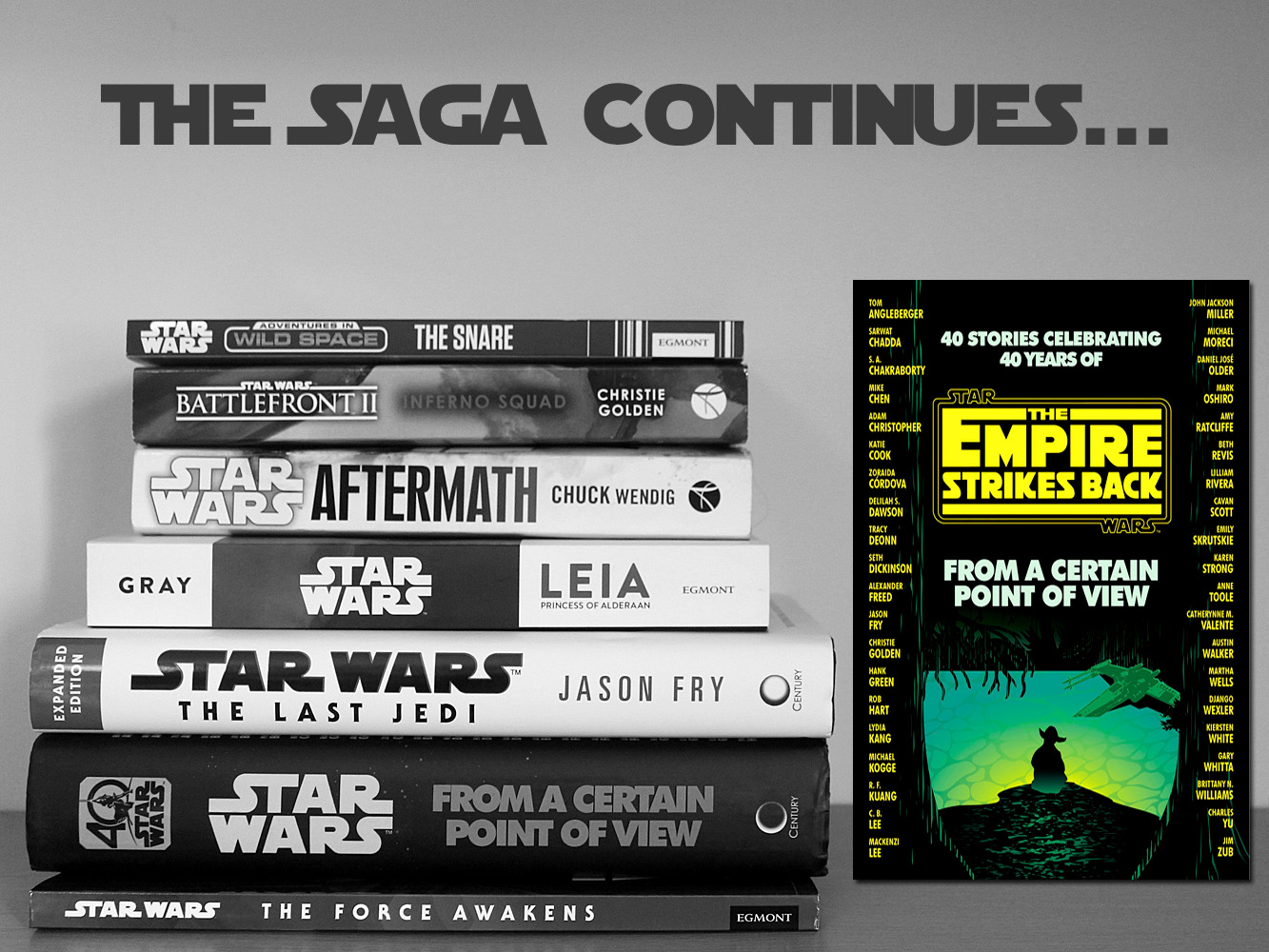 For those unfamiliar with this format, let me recap. The From a Certain Point of View (FACPOV) books each cover one of the Star Wars movies through 40 short stories—one each to celebrate the 40 years the film has been out. A different author writes each story, and each one is told from the perspective of a different character. What’s unique about these stories, however, is the choice of characters whose perspectives we’re seeing events through. Don’t expect to read tales from Han, Luke, or Leia—their stories are told in the original films. Instead, we get to experience those same events from the perspectives of characters who are often so minor as to never have even had a name—if they appeared on screen at all. This latest FACPOV book includes tales from stormtroopers, TIE pilots, ugnaught miners, medical droids, and even the chef who is preparing a meal to be served to Vader in the dining room where he is first revealed on Cloud City.

Some of the most interesting tales come from some of the most unlikely characters too. This new volume includes stories from the perspectives of Han’s tauntaun, the space slug that almost devoured the Millennium Falcon, the wampa that attacked Luke, and even the Dagobah cave which we now know is sentient. Some of those might be causing some of you to roll your eyes—I did too if I’m being entirely honest—but some of those stories ended up being among my favorites in the collection. The tale told by the space slug (now named Sy-O) is immense in scale and surprisingly powerful, while I defy anyone to read the tale of Han’s tauntaun and not weep by its conclusion. Seeing events play out through the eyes of often ordinary people remind us that the war between the Empire and the rebellion had an impact on the lives of everyone, not just a handful of key players.

That being said, there are a few bigger names getting their own stories this time out as well as the truly minor characters. Obi-Wan Kenobi’s force ghost tells us a tale that begins with probably the best single line of the whole book, especially when you imagine it being delivered in the droll voice he perfected during the Clone Wars, and even Emperor Palpatine gets to tell his version of events. Post-prequels, it can be hard to recall just how little a role the Emperor plays in The Empire Strikes Back, but this story explores an interesting gap in his knowledge. Other named characters with stories in this volume include Admiral Ozzel, Boba Fett, and even Yoda. I was pleased to spot some characters from the wider Star Wars universe putting in an appearance too, such as Rae Sloane and the lingering consciousness of L3-37.

The stories in From a Certain Point of View also work wonders to improve the diversity of these older Star Wars stories without changing anything about the core plot. Does it really matter to know that the kitchen boy at Echo Base has an epic crush on a handsome tauntaun handler? Or that two of the female TIE pilots who flew around the asteroid field searching for the Millennium Falcon were lovers? No, but anything that shows that the galaxy far, far away isn’t as uniformly heterosexual as it appears to be on-screen will always be welcomed.

Of course, in a collection such as this, there will always be hits, misses, and MISSES. There were a handful of stories I struggled to get through because the writing style simply wasn’t for me, or I couldn’t bring myself to care about the particular characters enough to want to read about them. I won’t name the specific stories I didn’t enjoy here, as I imagine the list will differ for everyone. However, even when forcing myself to trudge on through a terrible entry, it was good to know that it would only ever be a few more pages before I could move onto something that would hopefully be better. Of course, the flip side of this is that whenever I was reading something truly fantastic that I loved, it would also end quickly!

I want to conclude this with my top five stories from this volume. There were many great choices to pick from, but these were the five that really stood out for me. This collection has made me excited to read the seemingly inevitable From a Certain Point Of View: Return of the Jedi in a few years’ time, and I know I’ll be picking that one up to complete the trilogy.

1. “She Will Keep Them Warm” by Delilah S. Dawson

My number one favorite from the collection, this story is told from the perspective of Murra, the tauntaun ridden by Han in his search for Luke, and it teaches us much about the social structures of tauntauns and the relationships they forge with one another. It also makes the death of Luke’s tauntaun significantly more heartbreaking than before, so beware going into this one, it’s even more tragic than the infamous Alderaan story penned by Wil Wheaton in the first FACPOV volume.

2. “There Is Always Another” by Mackenzi Lee

In this story, Obi-Wan’s force ghost muses on life after death and how it is that even after death, he still cannot escape the neverending drama of the Skywalker family. Set as Luke is preparing to leave Dagobah—and his Jedi training—behind, here Obi-Wan explores the similarities between father and son, and worries that another generation may be destined to make the same mistakes he failed to prevent years before. A touching story that makes me eager for more snarky Obi-Wan content.

3. “This Is No Cave” by Catherynne M. Valente

Sy-O the space slug (exogorth) shares their history and explains much about how these incredible creatures live in the cold reaches of deep space. This was the most surprising story in the collection for me, as I wasn’t expecting anything nearly so epic in scope and beautifully written. You’ll never watch the asteroid sequence in the same way again after reading this!

This story takes place during the evacuation of Echo Base and is told from the perspective of Toryn Farr, an ion cannon commander. One of the last to evacuate from the command center, Toryn works closely with Leia until the end but it is her wager on Han Solo’s chances with the Princess, a betting pool that has surreptitiously made its way around the rebellion’s higher-ups, that helps her keep focus in this life-threatening crisis more than any high idealistic goals. I loved how this story explores how things that can be deemed insignificant or silly can help us keep going through difficult times.

5. “Into the Clouds” by Karen Strong

Set in Cloud City, this story follows Jailyn, the wealthy daughter of a Tibanna gas exporter (not to mention compulsive gambler and occasional smuggler). Jailyn is unhappy with her life, but the Imperial takeover of her home opens her eyes to new possibilities. This story reminds us not to judge people by their initial appearance or write them off based on their circumstances and also gives us a glimpse into how Leia is seen by those outside the conflict.

The Turncoat: Renegades of the Revolution

2 thoughts on “The Saga Continues: ‘From a Certain Point of View: The Empire Strikes Back’”