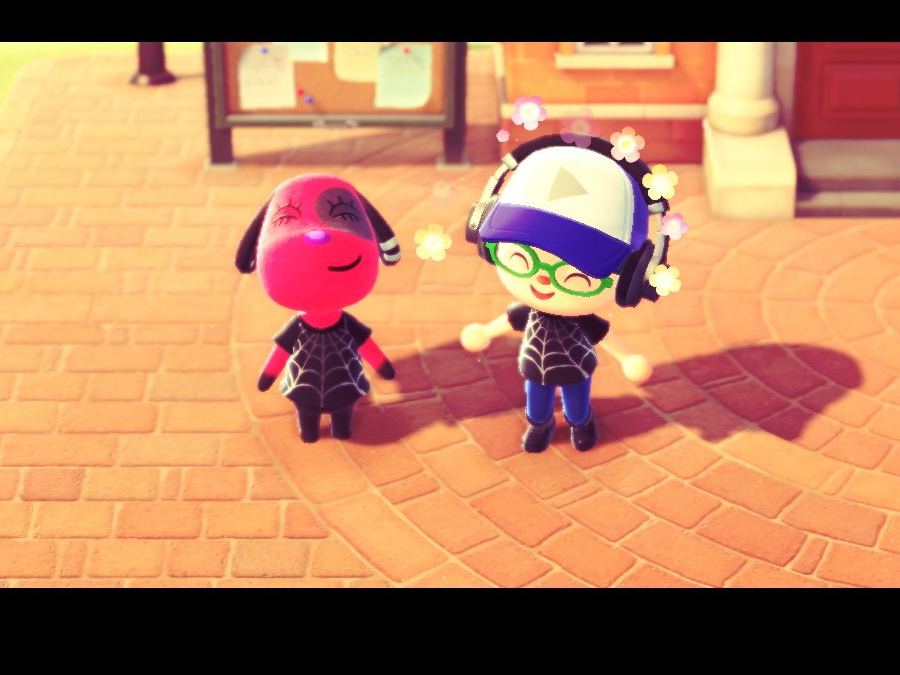 2020 has, if nothing else, been “a ride.” In a year riddled with social, economic, and physical instability, people everywhere keep looking for ways to find a little bit of “normal” in an increasingly abnormal world. When Connecticut went into lockdown back in March, many parents expected the pandemic to be under control by Halloween. And yet, by Halloween, many parents found that themselves looking for ways to create a safer holiday, looking for solutions that allowed for both holiday fun and social distancing.

Thus spawned the idea: virtual trick-or-treating on Halloween. Five friends and our kids all logged into ACNH at the same time, each island opening its gates every half hour, so that the children could island hop instead of running from house to house. Each island owner decorated their island. Some left out prizes, others hid prizes. We opened up a Facebook Messenger chat so that the kids could “live stream” and chat.

With the COVID-19 pandemic still in full-force this holiday season, many of our traditions need to be canceled. Sing-a-longs, parties, family gatherings, and religious services pose health risks. However, for ACNH players, some of these can be recreated virtually to try to savor the season’s spirit.

Whatever tradition you want to bring from your real life to your ACNH island life, you’re going to need a plan. When we started our Halloween planning, we knew that we wanted the kids to try to stay together in a group as a way to recreate the idea of one huddled mass traveling house-to-house. We put together a spreadsheet with 20-minute blocks of time on each island, allowing for 10 minutes to travel from one island to the next. In theory, this worked. In reality, we needed more time on each island.

Know what type of event you want

If you want to simulate an event like caroling or trick-or-treating, you need to create an island order, a time frame for everyone to be on each island, allot time for traveling, and make sure that hosts can get back to their islands to open them if they’re also participating in the island-hopping event.

We found that the kids got super excited on the first island and spent more time there than on the other islands. Then, by the fourth or fifth island, they got bored.

If you want everyone to aggregate on one island, like a holiday party, thenyou have a different planning map. You won’t need to coordinate everyone opening their islands at different times, but you will want to have activities, especially if you’ve got little kids playing.

Especially with kids thrown into the mix, you want to make sure that you’re opening your islands in an efficient way or else kids get bored. If you’re island hopping, make sure to stagger travel times. If you’re bringing a bunch of people to your island at once, then you might want to assign each person a 5 minute “window” for traveling, especially if you have children who get frustrated easily. For example, anyone who’s ever traveled to sell turnips can attest to the frustration of “Wuh-oh! Looks like we’re getting some interference.” Now, multiply that frustration by children’s impatience.

Decide on a way to chat together

If the primary goal is to offer a “virtual social experience,” then you’re going to want to have some way to talk other than the limited texting capabilties. We used the Facebook “rooms” because we were all part of the GeekMom Talk Facebook Group. If you want to use Zoom or just the voice chat in the Nintendo online app, that would also work. Since we were a bunch of parents with kids who don’t all have phones, I opted for the FB Rooms so no single person would be required to maintain a Zoom call.

Everyone has things they like and don’t like people to do on their island. Some people don’t want others fishing or diving. Other people worry about getting flowers trampled. I made sure that before people signed up their islands that they knew the only rule was that there were no rules, mostly. We had children ranging in age from 5 to 14. The goal was for everyone to have fun and placing excessive politeness restrictions on a bunch of sugar infused 5-year-olds wasn’t going to help any of us parents.

In the end, we really only had two “rules”: don’t actively destroy anything and don’t leave silently because that borks the game. I told all the parents that if they were opening their island, the kids needed to be allowed to shop, fish, dive, pick flowers, and run through flowers.

Depending on your goals, your activities may be “running around like Lord of the Flies with anthropomorphic animals.” If you’re trying to create a semi-controled situation, then you want to include activities. The nice thing about our island-hopping event was that no single parent had to plan a several hours long party for a bunch of other kids. Each island did something different. I hid wrapped packages above ground on my island, but since my island was the first, most of the children were more interested in talk to Jack. (I still have some wrapped presents hiding behind trees.) Another island left gifts and DIYs on the beach. Another island just had the kids come to visit and run amuck amuck amuck!

Unlike hosting the Halloween event, a holiday in-game party may not have the added distraction of special tasks for the day. At the very least, you want to give the kids the option to engage in activities. Some might just want to run around a random island talking to residents. Others might just want to fish and dive. Still, others might enjoy having games to play.

I really love taking pictures with my residents. I even made sure to match my favorite resident, Cherry, on Halloween. If you have a collection of costumes and fun outfits, you can leave them in one area so that the kids can pick them up, wear them (or keep them!), and take pictures around your island.

Set up a buffet

Since you’re not going to need to bake any special cookies, you can always set out fruit or, if you still have some, leftover Halloween candy. The kids don’t need to eat it, but it can give the party a bit of a more “realistic” feel.

Have Fun in Un-fun Times

My one word of caution for any parents hosting an ACNH holiday island party is this: if you’re a control freak, it’s not your best choice. I’m pretty easygoing about a lot of things. I have no rules on my island when my kid comes to play, other than my child needs their own island and can’t live on mine. Depending on the children’s ages, you need to be flexible. Island visiting is fun, only if both the visitor and host are enjoying themselves in equal measure.

I’ve clocked over 400 hours in ACNH, and hosting this party was the most fun I’ve had on my island. The kids seemed to enjoy themselves, and even when we borked the game a bit, everyone took it in stride.