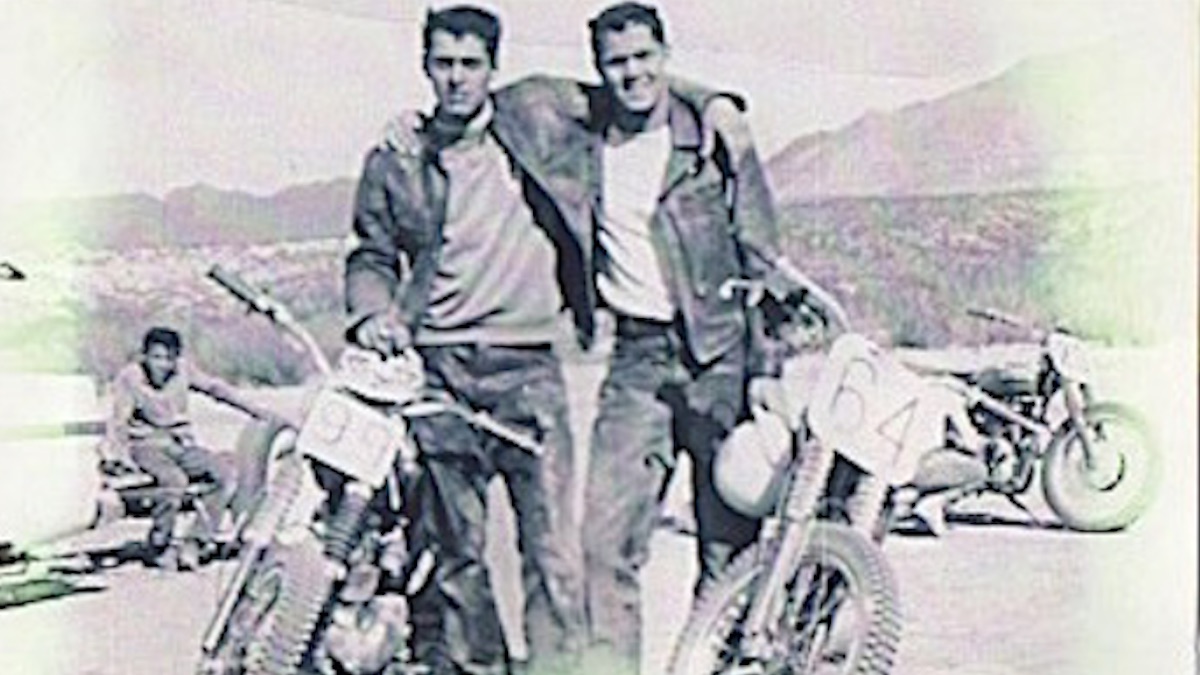 Drive safely. Be careful what you say. Always be fair. Follow the rules.

Unless you’re my dad.

When I wrote about how our Top Gear binging was a way of bringing my family together, my father was beginning to finally get back some of that irresponsible mischief and twinkle in his eye he had when I was a kid.

He wasn’t a drinker, was unfailingly faithful to my mother, worked hard, prayed hard, and did a majority of fix-it work on the home and our cars, but he was no Ward Cleaver. He was more like the Weasley Twins from Harry Potter, solemnly swearing he was “up to no good.”

He often used his special brand of mischief to teach us some life lessons.

I’m not advocating anyone go out and “try this at home,” but I am saying it’s possible to survive a little living off the rails. Here’s some of the @#$% my dad taught us about living.

Drive Recklessly. My father raced motorcycles and cars in his youth, and he never let us forget it.

When it snowed, we would take the truck to the nearest empty parking lot and do donuts. When we went over hills, he sped up so “we could get air” and that stomach tickle. If there was a speed limit posted on a highway, he always set his at least five miles over that. A few cops let him know that wasn’t appropriate, but what they know? “Just meeting a quota,” Dad would say.

Both my brother and I learned to drive in his ’66 Mustang–by shifting gears at slightly higher speeds than necessary on interstate access roads. I’m still not really sure my dad knew he was driving over the speed limit; it seemed about normal to him.

Shortly after my brother got his driver’s license, our intrusively well-meaning neighbor often called my mom to ask her to please tell my brother to quit revving the engine and peeling out in that “old car.” It’s simply too loud for the neighborhood.

My mother told him it was actually my dad who was driving the car and our neighbor was welcome to talk to him.

The concerned phone calls stopped coming, but the occasional car-revving did not.

Disobey Rules. Ever been on an amusement park ride surrounded by animatronics and heard the chipper music and banter fade out for a second while a disembodied voice announced, “please keep your hands in the vehicle at all times”? If so, you were likely riding somewhere in the vicinity of the Hart family, with my dad in the back seat of the little boat, log, or car.

I remember the overly-polite scolding from a Country Bear Jamboree worker when my dad lifted me up to pet the talking moose head on the way out.

“Keep off…” “Don’t touch…” “Do not enter…” These were mere suggestions.

We constantly found ourselves looking over our shoulder, with jittery fears of being caught by a museum docent when dad had to crawl up to that historic plane cockpit “just to take a look” or pulling dad’s mangled body from a ditch because he wouldn’t remain completely seated on tour tram.

He knew the importance of rules, as well as what rules he deemed important, having served in the military, worked as a campus police officer, and serving in education. He knew when to stay in line and when to happily jump the turnstile. I don’t think he ever actually jumped a turnstile, but I wouldn’t be surprised he did.

Even in his mid-’70s he still exhibits these little acts of rebellion.

We recently met my dad at an evening lecture and the little parking lot at the building had one way in and one way out. When we left, there were few people remaining in the lot. My dad got in his car and headed straight out the entrance past two large “Wrong Way” signs.

I looked at my husband and said, “Wow he didn’t even see those signs.”

My husband just glanced at me.

Fairness, Schmareness. There was a commercial I saw recently of a father with his son after a peewee football game. The son was carrying a post-season trophy that said “Participant” when the father knew his team won every game. The dad ripped the label of the trophy and wrote “Champions” in its place.

This was my dad in a nutshell.

My dad felt everyone should be allowed in the game, but no one needs a head start. If they can’t win, so be it. That’s competition. He felt everyone deserves the right to try, but they also deserve to fail if they don’t have the skills, physical abilities, or practice. No “lowering standards” if someone couldn’t keep up.

There are no “Participation” ribbons in his world.

There are many who disagree–I understand–but my father was also a big supporter of Special Olympics, he encouraged and cheered on everyone on the field at the school, and told everyone they did a “great job” after school games. This behavior didn’t go unnoticed by my brother, who went on be a special education teacher specializing in adaptive physical education. My brother and his wife have spent much of their professional career creating camps for youth with autism.

It isn’t all about competitive sports. I don’t recall my dad ever throwing a game of checkers, Candyland, or Battleship just to spare my feelings. Oh, yes, I stormed off a few times, but then I got competitive as well.

I knew I would eventually be good enough to beat my dad “at his own game.” When I won that first game of Battleship after tweaking my strategy over and over again, that victory was sweeter than if I had been handed a win.

Was it fair for a grown man like my dad to jump over a five-year-old’s ill-fated gameplay and sink my destroyer? Probably not, but if he did let me win, I wouldn’t have built up that sweet taste for justice in beating him “fairly” myself?

Trust me, when I first beat my dad I earned that title. It was a long time coming, but no one was taking it from me.

Embarrass Your Kids. My ex-Air Force, racing dad had another side to him. He was in theatre in college, and also taught it in his early years in education. He performed in Shakespeare productions, modeled for rifle catalogs, and he wasn’t embarrassed about anything.

He wasn’t shy about making inappropriate comments to others or acting silly in public, and he felt the most uptight, “too cool for school” teenage years made for easy prey.

He’d pose for photo ops with amusement park mascots, stop and dance when music he liked came over an intercom, and, by far the worst offense, made sure any annoying waiter-infested singing presentation was enacted during special occasions.

To this day, I have an irrational fear of going out to eat on my birthday.

As a teenager, when I was especially self-conscious, I found this behavior horrifying.

It hit home for me my first year in college. I had a classmate who grew up on a reservation. She had a baby at age 16 (who was staying with her sister back home) and was overcoming alcoholism by age 19. One night, I took her out to eat with my parents when they were in town.

My dad was, of course, filled with embarrassing jokes and comments. A couple were off-color, and I just knew my friend would be embarrassed too. Maybe even offended. Instead, when we left she told me:

“I want your parents to adopt me.”

I wasn’t expecting that response , but she continued:

“They are so happy, and so much fun. You’re lucky to be able to sit at the table with them and laugh.”

I guess I was fortunate. I just needed someone else to point it out.

From the looks of this list, it would seem my father was heading us all down a road to destruction, but here’s some of the other things my father taught me nearly every day:

Never say something to another person with the intention of hurting them.

Laugh when you can, because there will be times when you won’t be able to.

Be humble, and express gratitude for even the smallest favors.

Know that you might not be able to “live your dream,” so always keep back ups on hand.

Adhere to his favorite verse: “This is the day The Lord has made. Rejoice and be glad in it.” No matter what you believe in (or don’t believe), realize tomorrow is not guaranteed, so be appreciative of and make the most of today.

Most of all, love your spouse. Love your children. Love your life. Nothing will ever be perfect. When you chase “perfection,” you miss the wonderful things around you, flaws and all.

This Father’s Day, in the age of being overly cautious we might hurt ourselves, or unintentionally say something “inappropriate,” and at a time when we worry about safety and security to the point of paranoia, I have to look at my old school, old fashioned dad and offer my heartfelt love for that entire generation of what many would see as out-dated Manly Men. I thank him for teaching me how to be a strong, hard-headed, independent woman.

Yes, there were times when I was embarrassed by something he said, when I was worried I would see a police car in front of our house here to pick him up for disregarding traffic rules, or downright terrified I’d see him fall to his death from the top of a roller coaster.

There were times, however, I would laugh so hard it hurt. There were times when I was proud of my father coming to the rescue of other dads who seemed to have forgotten how to change a tire or fix a bike. There were also times when I knew, no matter what or how hard he was working, my dad would be in the audience of all my school plays and recitals, or attend every parent conference and science fair.

Yes, my dad might be a relic of “less enlightened time,” but like some of these relics, he was, and still is, priceless.

My wish this Father’s Day for all of you is to have a Father, or father figure, who is just as crazy.

Without them, life may be a little less embarrassing at times, but a helluva a lot less fun.

Last Chance to Win Our Monster in Paris Prize Package! 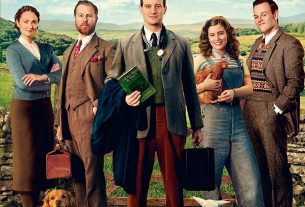 ‘All Creatures Great and Small’ a Coming Home to Darrowby

4 thoughts on “Irresponsible $#%! My Dad Taught Me”