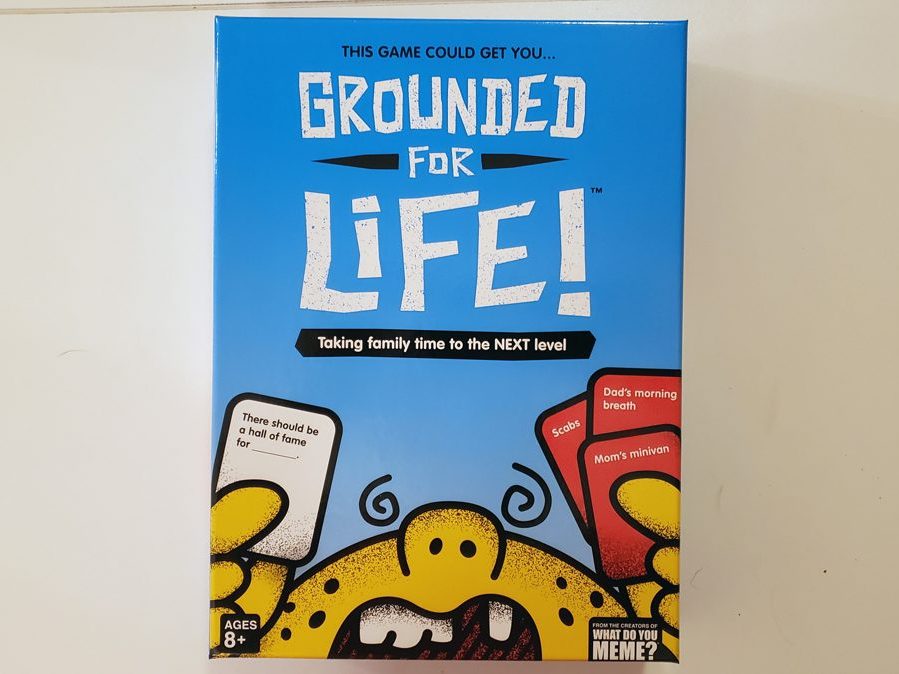 The year 2020 has been pretty trying, and sometimes a simple silly game is exactly what brings on some much needed laughter and silliness. The makers of What Do You Meme? have released several titles this year that are geared to include some of the younger members of the family too. I recently reviewed What Do You Meme? Family Edition from these titles, and I have also received a copy of Grounded for Life to review as well.

What is Grounded for Life?

Grounded for Life is a card judging game similar to Apples to Apples or Cards Against Humanity that was created by the makers of What Do You Meme? It’s intended for 3 to 20+ players ages 8+ and takes about 30-90 minutes to play. It has a MSRP of $19.99. 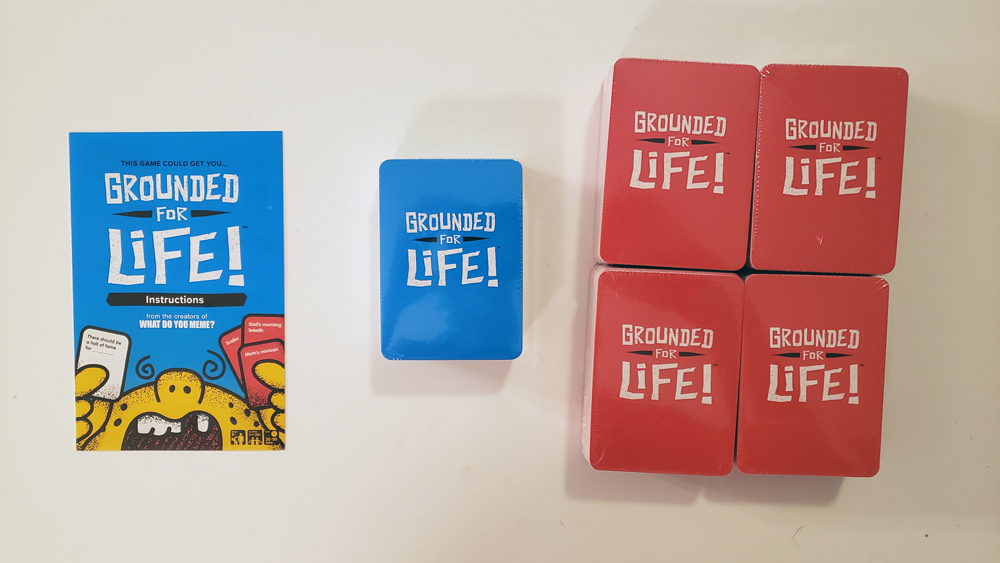 Grounded for Life contains the following:

The cards are typical playing card thickness and the bright colors really do help players tell them apart. The text and font choices make them fairly easy to read. The situations and potential answers tend to stick within the PG-rating area. There were some pop cultural references my almost 7 and 10-year-old kids would not be able to pick out (they don’t know what Rick and Morty is or who Selena Gomez is), but most stuff is pretty accessible to them. Every so often you might run across a card that goes over the kids’ heads but make the grown-ups pause. Think of those jokes in sitcoms and kids movies that you re-watch as an adult and nearly did a double take at the joke you missed as a kid. We tended to just not play those cards with the kids in the game and everything went fine.

How to Play Grounded for Life

Grounded for Life is one of those easy to set up, learn, and play games that make it easy to have fun with little effort. Perfect for a night when the grown-ups are exhausted, but you still want to do something fun with the kids.

The goal of Grounded for Life is to be the first to earn the required number of Blue Cards by coming up with the funniest Blue and Red Card pairing. The number of cards needed varies by the number of players in the game.

Setup is beautifully simple. The hardest thing you have to do is get the plastic sleeves off the cards the first time you play. Otherwise, do the following things to set up a game:

You don’t even have to shuffle to cards and cards will naturally continue to be shuffled between games as is so that makes it even easier to play.

Gameplay follows a very simple dynamic where each player takes a turn being the Judge while the other Players try to make pairings and this keeps repeating.

The youngest Player is the first Judge and places the top Blue Card out for everyone to see. The Players try to match a Red Card in their hand to the Blue Card to make the funniest combo they can think of. Once the Judge has a Red Card from everyone, they pick the funniest combo in their opinion. The Player the Red Card belonged to wins the Blue Card. The Red Cards that were played all go into the Discard Pile, the Players take a replacement Red Card from the Pile for their hand, and the judging passes to the Player to the left of the previous Judge.

When you are not judging, you are the one trying to pair up your Red Cards to the Blue Card. You always have to remember that you are playing to the Judge’s sense of humor because they ultimately pick the winner. In our house any poop or fart related jokes tend to be played to the Kid Judges for this very reason. There is a bit of a unknown though and judges may go in a direction you don’t expect (especially kids).

The game ends when one Player wins enough Blue Cards to be declared the winner. The number of Blue Cards needed to win depends on the number of Players:

I would like to note that while the game does have rules for a winner, most of the times I have played we just kept on playing until we feel like stopping and then count up who got the most Blue Cards at the end.

Why You Should Play Grounded for Life

Grounded for Life is one of those simple games that is absolutely a lot of fun whether it’s with just your immediate family or a larger group. It’s fast to set up, teach, and play, and is casual enough that you can add or remove players if needed, especially if you’re not as concerned about playing until one person hits the goal number of Blue Cards. While the recommended age to play is 8+, we found that our almost 7-year-old was perfectly capable of holding his own in a game, which mean our whole family could play. With the PG-rating on most cards, you can probably get away with older generations playing along too and I know our kids will be roping grandparents into playing.

The game had a nice variety of cards that are about the quality I would expect for the $19.99 price point of the game. We should be able to play this many times without it feeling repetitive and if it’s like other games of this type, I would not be surprised to see expansions added later.

Overall, it’s fun without being too complicated, but there’s a nice lesson for kids in learning about playing to your audience type and knowing that your brother may find a fart joke funnier than your mom does (or vice versa depending on your family). Tuck this one under the tree or gift it to another family who likes silly shenanigans.

You can buy Grounded for Life from the official site here, from Amazon here, or from Target here.  If that’s not enough family game night silliness for you, check out my review of What Do You Meme? Family Edition here.

Disney Rockin’ Ever After on Ice!

Travel Week: Five Places To Visit For Your Costuming Needs